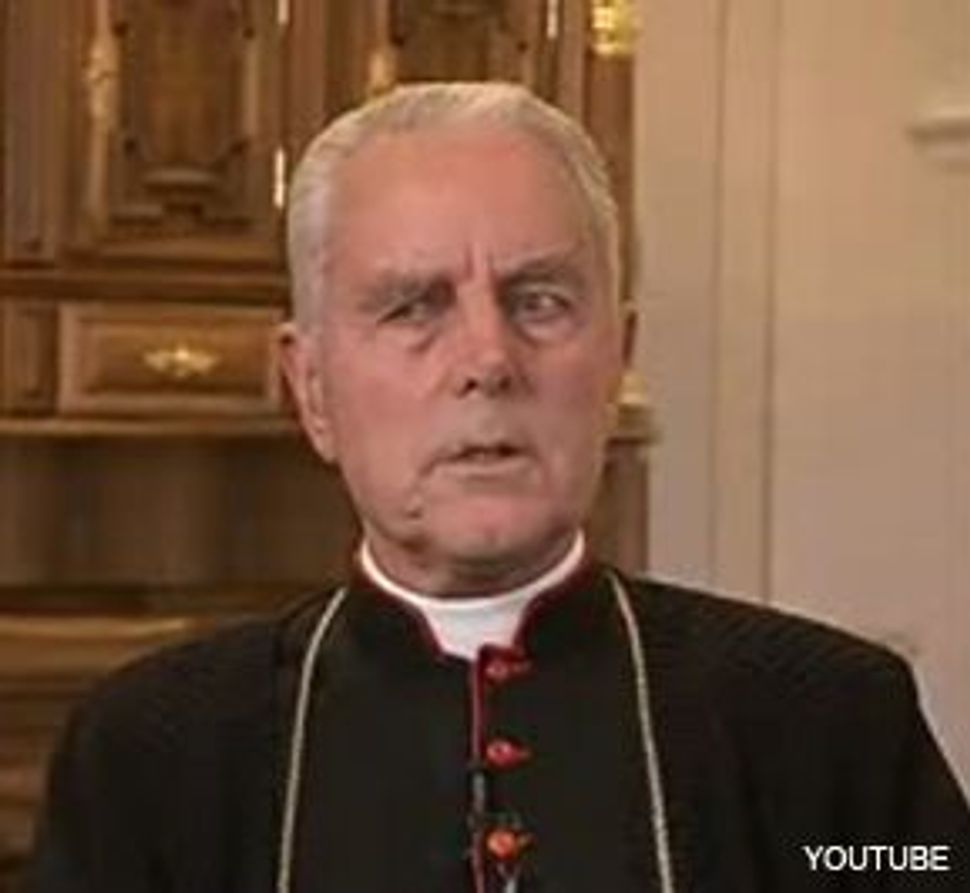 NOW RECONCILED: Richard Williamson was ousted from the church over membership in a conservative group that rejects Vatican II reforms.

The most significant impending meeting between Jewish leaders and Pope Benedict XVI is being called off due to the Catholic Church’s recent decision to reconcile with four renegade ultra-conservative Catholics, including one who has a history of denying the Holocaust. 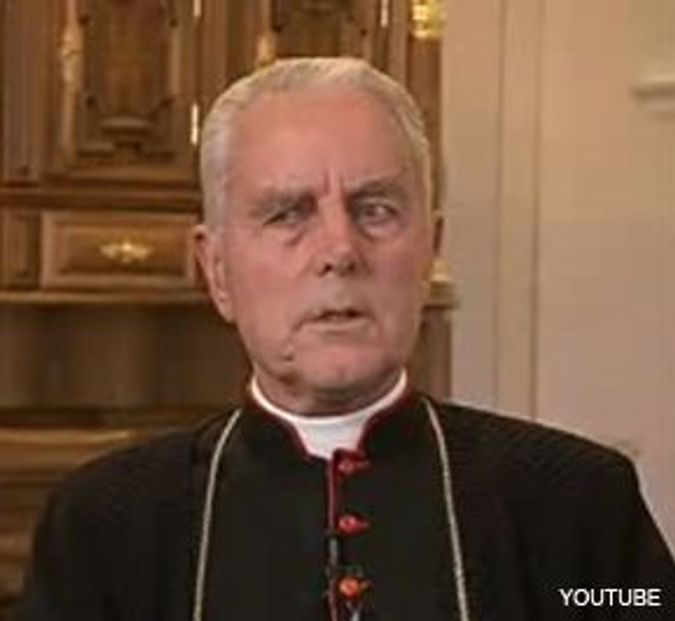 NOW RECONCILED: Richard Williamson was ousted from the church over membership in a conservative group that rejects Vatican II reforms.

Israel’s chief rabbinate sent a letter to the Vatican indefinitely postponing a March summit in Rome that was to include the pope. The letter came a few days after the Vatican revoked the excommunication of four bishops from the Society of Saint Pius X, a group that opposed modernizing reforms adopted by the church during the 1960s, including efforts to reconcile with Jews. One of the four bishops in question, Richard Williamson, has said that no Jews were killed in Nazi gas chambers and has accused Jews of striving for “world dominion.”

Jewish and Catholic leaders have reconciled in recent decades after the Second Vatican Council of 1962 to 1965. As part of Vatican II the church denounced antisemitism and distanced itself from centuries of anti-Jewish persecution. Jewish participants in dialogues with the church say that the current episode threatens the progress that has been made. “I consider this to be the most serious crisis in substance that we’ve had with the church since the Second Vatican Council,” Rabbi David Rosen told the Forward.

Rosen is the chief Jewish interlocutor with the Catholic Church. He heads the American Jewish Committee’s department for interreligious affairs and is also chairman of the International Jewish Committee on Interreligious Consultations, or IJCIC. In his role as adviser to Israel’s chief rabbinate Rosen helped draft the letter suspending the March meeting. “Under the circumstances, we simply can’t afford it in terms of our own integrity,” Rosen said of the canceled meeting.

Rosen’s assessment of the seriousness of the current crisis was backed by other Jewish communal leaders who have been involved in interfaith dialogue. “What’s at stake is the future of Catholic-Jewish relations, which a lot has been invested in,” said Abraham Foxman, national director of the Anti-Defamation League.

The Rev. James Massa, who has led the Catholic side in talks with the Jewish community in the United States, condemned Williamson’s views as “completely unacceptable,” like many other church leaders, but he said he believed that the current episode will not scuttle Catholic-Jewish relations.

“We’ve weathered other storms like this one in the past,” said Massa, who is executive director for ecumenical and interreligious affairs at the United States Conference of Catholic Bishops.

The Vatican has, as yet, not completely welcomed Williamson and his colleagues back into the church and has said that a full reconciliation will be dependent on the Saint Pius X members accepting the teachings of the Second Vatican Council.

The episode could affect a visit to Israel that Pope Benedict has planned for this coming May. “We have no intention of interfering with internal affairs of the Catholic Church,” Noam Katz, a spokesman for the Israel’s Foreign Ministry, told the Forward. “However, the desire to bring a Holocaust denier into the church might shade the relation between Jews and the Catholic Church.”

The controversy began January 21 when an order that had been approved by the pope announced that the 1988 excommunications of the four bishops from the Society of Saint Pius X were being revoked. The pope did not consult the Vatican’s official in charge of relations with the Jewish community, Cardinal Walter Kasper. Rosen, the IJCIC leader, says that he had heard about the controversial order before Kasper. This has given Rosen hope that the pope made his decision without being aware of Williamson’s incendiary statements.

Even aside from Williamson’s views on the Holocaust, the Society of Saint Pius X has a stained reputation among Jewish communal leaders because of the society’s rejection of parts of the Second Vatican Council. Vatican II, as it is known, rejected previous Catholic teachings that blamed Jews for murdering Jesus. The Anti-Defamation League has assembled a dossier indicating that publications of the Society of Saint Pius X have in recent years made similar accusations about Jews along with many other objectionable statements.

The Vatican’s conciliatory moves toward the four bishops have hit a chord because they come after a number of other recent decisions by the Pope Benedict XVI that have angered the Jewish community. Last winter, the pope moved to beatify Pope Pius XII, who has been accused of turning a blind eye toward the murder of Jews during World War II. A few months earlier, the pope had widened the usage of the Latin Mass, which has some prayers to which Jewish religious leaders have objected. Referring to these recent incidents, along with the revocation of the excommunications, the ADL’s Foxman said, “something is going on.”

“What it seems to some of us is that somehow there is a new priority, and the priority is unifying the Christian world almost at all costs,” Foxman said.

But Massa of the U.S. Conference of Catholic Bishops said the church is still committed to building bridges with the Jews. “We have worked in the U.S. so closely and faithfully to build bridges with the Jewish people — this is a black eye from someone who has a track record of standing in the way of true progress,” Massa said, referring to Williamson.

Since the initial move to revoke the excommunications, the official Vatican newspaper has condemned Williamson’s views. The current head of the Society of Saint Pius X, Bernard Fellay, also made a statement criticizing Williamson and asking for forgiveness from the pope.

People who have been at the center of Jewish-Catholic dialogue, even on the Catholic side, said that they would only be satisfied if the pope forces Williamson to renounce his views before Williamson is allowed full reconciliation with the church.

“If not handled, it could get enormous,” said Eugene Fisher, who was the Catholic Church’s point-person for Jewish relations in the United States until recently. “It’s not necessarily enormous yet, but one does have to be very concerned.”