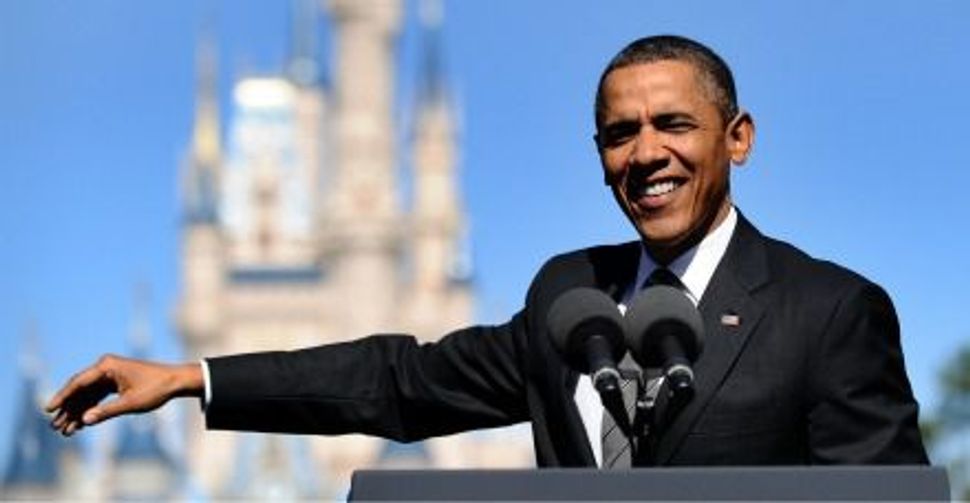 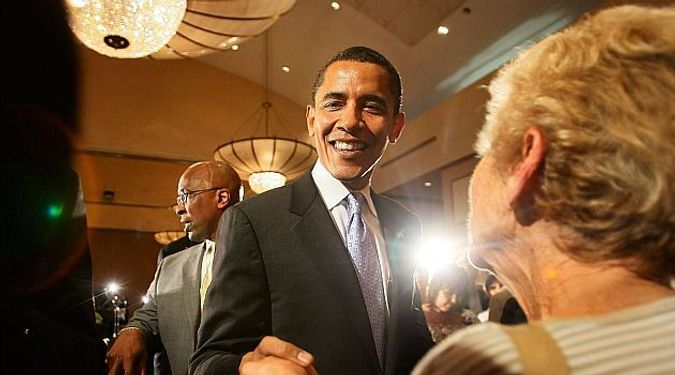 Long Ago: Barack Obama won over many Florida Jews in 2008. Four years later, he has work to do to get them back on his side. Image by getty images

In 2008, comedian Sarah Silverman recorded a Web video urging young Jews to go to Florida and persuade their grandparents to vote for Obama. If Obama lost, Silverman warned, she would “blame the Jews.”

Silverman was joking, sort of. But she was also responding to rumors, then rampant among older Florida Jews, that Obama was a Muslim — and to the widespread belief that these rumors would hurt his election bid.

Obama went on to earn 78% of the Jewish vote nationally and to win Florida, including the heavily Jewish counties of Broward and Palm Beach.

Read the Forward’s story about a new study that claims Jews are shifting towards the GOP.

Four years later, rumors that Obama is a Muslim have vanished from Jewish discourse here. But criticism of his Israel policy has taken on strikingly harsh dimensions.

Obama represents an “existential threat” to Israel, said Sid Dinerstein, chairman of the Palm Beach County Republican Party, while lunching on a hardboiled egg and a Diet Sierra Mist at his home in a Palm Beach Gardens gated community. Dinerstein is known in local political circles for exaggerating for effect. But while describing Obama in language now most commonly used to describe the regime governing Iran, he grew heated.

Democrats decry the characterizations, citing the president’s record on Israel. But it’s clear they fear them and take seriously their potential impact on election results in closely contested Florida, with its 27 Electoral College votes. The Obama campaign has thrown its top resources into the fray, deputizing Democratic National Committee chair and Florida Rep. Debbie Wasserman Schultz, among others, to push back among Florida Jews.

It’s an effort that resembles the push against the Muslim rumors four years ago.

And some in Florida see a relationship between the charges leveled 2008 and 2012.

In Silverman’s 2008 video, the comedian pinpointed Obama’s name as the locus of Jewish anxiety over the candidate. “You know why your grandparents don’t like Barack Obama?” Silverman asked. “Because his name sounds scary, it sounds Muslim.”

And while some considered the Muslim anxiety a proxy for race, Kenneth Wald, a professor of political science at the University of Florida, said that, in his analysis, it was always about Israel.

“Four years ago, Obama was unknown,” Wald said. Jewish opposition to Obama, Wald said, was focused on the idea that “he’s a Muslim, and Muslims do not have Israel’s best interest at heart.”

Before Obama was elected president, those anxieties had little to go on but his social ties with Palestinian academics and his attendance at a church led by Rev. Jeremiah Wright, known for making controversial statements about Israel. But now, in 2012, there are years of policy to analyze, and Obama’s religious and ethnic identity can fade into the background.

“The Israel conversation has changed dramatically, at least in my segment of the community,” said Rabbi David Steinhardt, spiritual leader of B’nai Torah Congregation in Boca Raton, where Obama spoke in May of 2008, toward the end of that year’s primary, just days before Hillary Clinton conceded the race.

Obama’s speech then hit notes that have become regular touchstones in his addresses to Jewish communities in recent years: the Jewish camp counselor who impressed him with his love for Israel when Obama was a child, his respect for the Jewish notion of tikkun olam.

But the video of the measured address, still available online, doesn’t tell the whole story of the visit.

“It was a very charged atmosphere,” Steinhardt remembers of the town hall-style gathering. The address came amid media reports of rumors circulating among Florida Jews about Obama: that he was an Arab, that he was a Muslim, that he was overly sympathetic to the Palestinians.

These concerns came out at the town hall event, Steinhardt said. His synagogue, one of the larger Conservative congregations in the country, with 1,250 member families, was a major stop on Obama’s Jewish campaign trail. “It was a very frank conversation that took place,” Steinhardt recalled. “Someone said to him, if you were Barry Obama, things might be easier in your campaign. He responded to that appropriately, with good humor.”

Most of the questions in 2008 dealt only indirectly with Obama’s supposed positions on Israel; they were manifestly about his identity. In 2012, that has changed.

“We’ve matured,” said Ned Siegel, a major figure in Republican political fundraising in Florida and the Romney campaign’s national Jewish outreach chair. Republicans have learned “not to use the race card, not to use the religion card, but to evaluate a man’s character, ethics and virtue,” he said.

But harsh, overarching rhetoric like Dinerstein’s, denouncing Obama as posing an “existential threat” in blanket terms, is common. “As a Jew, I have to tell you he’s anti-Jewish in any respect,” said Hal Rosenberg, a Lake Worth, Florida, resident.

And Arline Rein, 71, a Michigan resident who winters in Boca Raton, said that if Obama wins again, she can “see certain trends happening here that happened in Germany.” Rein continues, “As a Jewish person, it’s very scary to me if Obama gets in.”

Wald, the political science professor, said that he believes that not only are the 2008 Muslim rumors and the 2012 discourse on Israel related, but they come from similar sources.

“I think you’re seeing a good deal of overlap,” said Wald. “I think what you’re seeing is that the message is transmuted in some ways, but I also think it’s the same political forces, broadly speaking, who are trying to raise this alarm.”

Such discourse takes place in the context of an Obama administration record on Israel characterized by sharp disagreements in some areas (freezing settlements in the occupied West Bank) and fervent praise for Obama from Israeli officials in other areas. (Israeli Ambassador Michael Oren lauded as “warm and immediate” the president’s response to Israeli requests for cutting-edge weaponry that the Bush administration had denied Israel; Prime Minister Benjamin Netanyahu thanked Obama for his single-handed veto of the U.N. Security Council proposal to recognize an independent state of Palestine.)

In conversations with Florida Jews a week before the Florida primaries, voters expressed concerns about a few specific incidents during the Obama presidency. One with particular resonance was the president’s clash with Netanyahu in May 2011. The Israeli leader lashed out at Obama then for suggesting that a final status resolution between the Israelis and Palestinians should be based on Israel’s pre-1967 borders with some mutually negotiated adjustments made for Israeli settlements built since then. Netanyahu, in a speech that left out those qualifications, denounced the 1967 borders as indefensible; Obama reiterated his insistence on “mutually agreed land swaps.” This may be just one misunderstanding against a backdrop that includes numerous points of agreement. But for those who see Israel’s hold over the West Bank — or U.S. agreement with the Israeli government — as sacrosanct, it touches a central nerve.

Another case has more to do with perceptions of the respect and honor Obama shoule pay Israel’s leader, or perhaps by extension, the country he represents. In an alleged incident cited by several Jews interviewed, Netanyahu had to enter via a back door of the White House and not allowed a photo opportunity with the president; Obama supporters have said that the incident has been mischaracterized.

In a meeting at a Starbucks in Weston, Wasserman Schultz said that what she called the misrepresentations of Obama’s record were politically motivated.

“They’re still overwhelmingly supportive of the president,” Wasserman Schultz said of her constituents. “What the Republicans don’t have — and this is the reason they have to try to erode support for the president by sowing seeds of doubt on Israel — is they don’t have a record Jews support on domestic issues.”

At a retirement community in Delray Beach, Adele Lurie, a Republican, said that she found the Israel issue “confusing.”

“He’s opened his mouth several times and stuck his foot in it,” Lurie said of Obama’s Israel policy. But a professor from nearby Lynn University had just spoken to a packed house at Lurie’s retirement community, talking about Obama’s military support for Israel. Now she didn’t know exactly what to think.

“It’s very confusing what the actual situation is,” Lurie said.