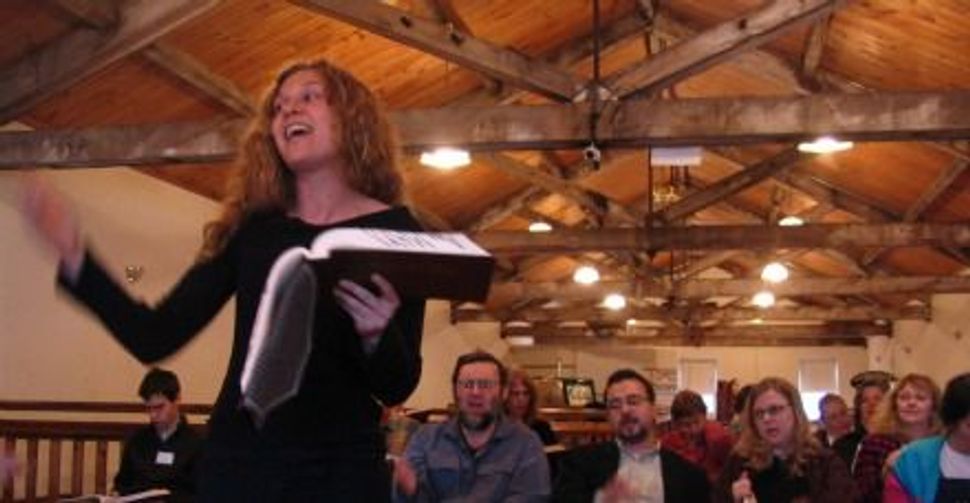 Image by Courtesy of Rachel Speer 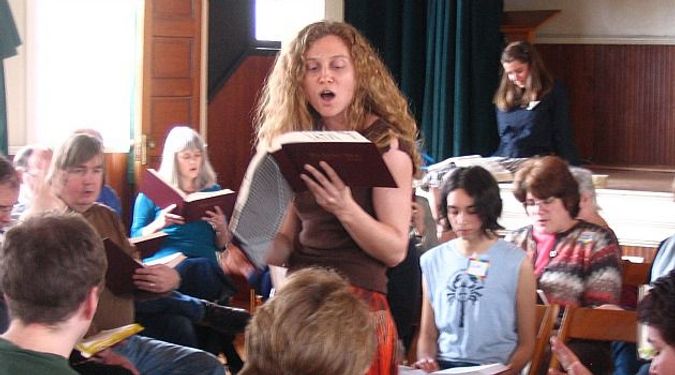 Salve the Soul: Abigail Beshkin is Jewish, but she finds comfort in singing Christian hymns with this group of singers. Image by Courtesy of Rachel Speer

About a year-and-a-half ago, I went through a devastating breakup and, soon after, began a love affair with perhaps the strangest hobby an ex-yeshiva girl could imagine: Sacred Harp singing.

Considered a type of American roots music, Sacred Harp music consists of four-part a cappella harmonizing of Christian hymns. With roots in early 18th-century English parish singing and the singing-school movement in colonial New England, it became especially popular in the American South and West in the 19th century, even as it fell out of favor in the Northeast. Its popularity peaked in the South before the Civil War with the publication of a shape-note songbook called “The Sacred Harp,” which is how this type of singing got its name. 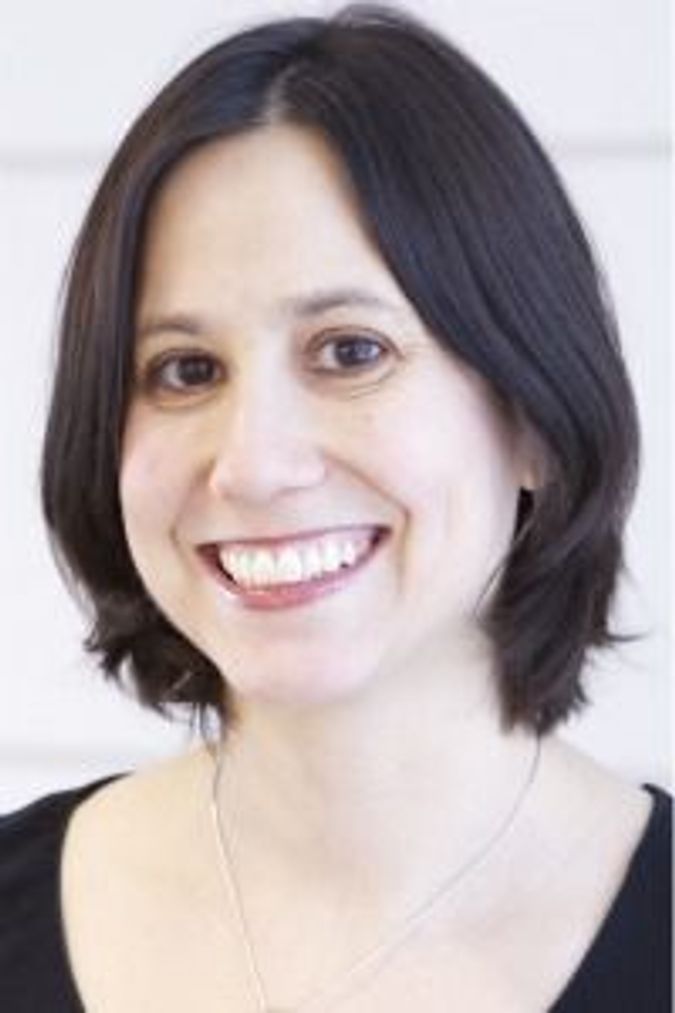 I first came across Sacred Harp at the public radio station where I used to work, and its melancholic, almost raw sound stayed with me. One Sunday, about a month post-breakup, I resolved to do something — anything — that didn’t involve devouring a gallon of Edy’s Slow Churned ice cream and crying into the empty container. I soon found myself in a sweltering church in Brooklyn, N.Y., holding a hymnal on my lap.

At the front of the church, the choral leader stood in the square formed by the four sections of trebles, altos, tenors and basses. She explained that Sacred Harp music is also called “shape note” music, because it uses a four-note system in which each note has a distinct shape. I concentrated so hard that a full 20 minutes went by before I realized I had not checked my iPhone for an “am srry pls take me bk” text. I spent the next half hour not checking my phone because I was too busy obsessing over scenarios in which my 11th grade Talmud teacher walks into this church and finds me singing about Jesus.

My boyfriend and I had been teenage loves at a Zionist camp in the Poconos 18 years earlier; when we reconnected, I lived in Boston and he in New York. We had been dating for more than a year when I moved to Brooklyn. He dumped me three months later. After that, I fell into a kind of stupor; even now, I remember little about that summer except for the music.

I went to the weekly Wednesday “singings,” as they are called, and the frequent Sunday ones. For those hours, I focused on the alto lines and not on the romantic summer weekend trips I would not be taking. Unexpectedly, I began to find comfort in the words. Rashi-like, I began to read more modern, personal interpretations into the hymns.

Surely, in 1759, when Joseph Hart wrote the words “Speak and let the worst be known, Speaking may relieve thee,” in the hymn that later became “The Grieved Soul,” he did not mean, “You may feel better if you call your Upper West Side therapist.” But that was what I heard. The song “Poland,” with the words “God of my life, look gently down, Behold the pains I feel,” was not really about a breakup. But from the depths of my grief, it sounded as if it was written just for me. After awhile, however, all this comfort I was taking in Sacred Harp music began to make me a little uncomfortable.

What was I doing? There is no doubt that I have managed to lose my place in the Jewish world, and each year it gets harder to return. I’m nearing 40. I don’t have kids. I always figured I would stake my claim somewhere in the Jewish community. Instead, here I was, singing about salvation in a dimly lit church, a few feet away from a granite bowl of holy water.

My mom, an active amateur cellist, reminded me about the time she played in a public Messiah sing at Harvard one Christmas season, and how there had been a guy in the chorus wearing a kippah. A friend suggested that to ease the guilt I just sing the word “Moses” every time the word “Jesus” comes up. Sacred Harp singings, at least in New York, are by no means official religious gatherings. Many of the singers are musicians or music enthusiasts, and the singings are, for the most part, only about the music.

Then, in September 2010, I found myself with a dilemma. The annual All-Day Singing — the event of the year — was coming up. People would be traveling from all over the world, and it would be glorious: hundreds of voices raised in song. It was also on Yom Kippur.

I was torn. Of all the Jewish traditions I had broken over the years, Yom Kippur had never been one of them. But being newly single, I wasn’t feeling especially worshipful. With my hurt still fresh, I contemplated signing up for the weekend. But in the end, I couldn’t bring myself to skip Yom Kippur for a day of hymn singing.

Sacred Harp singing got me through my lonely first year in the city. After awhile I didn’t see as many messages in the words, but instead found comfort in the act of singing, and in the community of singers I found.

After singings, we go out for drinks. On weekends, we sometimes drive to other cities to take part in their singings. And in this strange way, though I haven’t joined a synagogue, the fact that I have found a community among people who sing relatively obscure music has given me hope of perhaps someday finding my place in another community, perhaps the Jewish community. Plus, in true “only in New York” fashion, I have found that many of my fellow Sacred Harp singers are also Jewish.

Last year, the New York City All-Day Singing was not on Yom Kippur, and I threw myself into it. Part of the tradition involves serving a potluck for the out-of-town singers. That morning, I went to pick up the lasagna I’d ordered. At the market, something caught my eye: a chocolate babka. I tossed it in my cart, and, at the church, laid it out on the table. At the break, one of the singers cut into the gooey pastry and asked, “Any idea what this is?”

“It’s a babka,” I said, and proudly cut a slice, a little piece of myself.

Abigail Beshkin is an editor and writer living in Brooklyn.