March of the Living Reception Hosted by Israel Ambassador 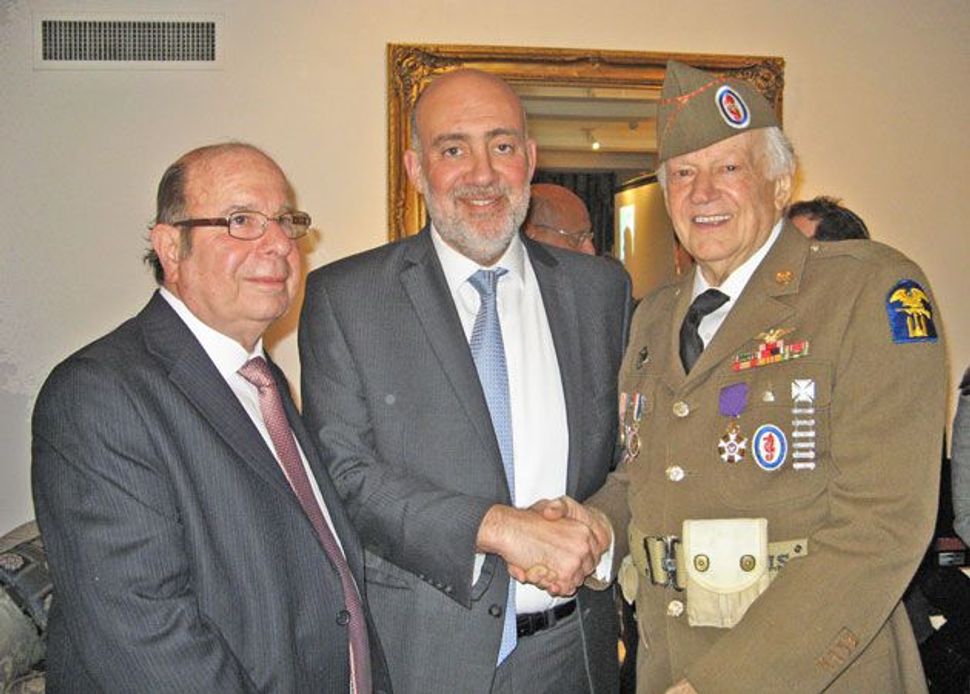 “We do it every year, like Exodus,” said Malcolm Hoenlein, executive vice chairman of the Council of Presidents of Major American Jewish Organizations, at the January 17 March of the Living reception. The reception was hosted by Ron Prosor, Israel’s ambassador to the United Nations. Hoenlein states that instead of focusing on the past, we should “learn the lessons of the past for the future….. We are not judged by our children but by our grandchildren…. When people don’t want to remember what happened, the greatest danger is ignorance, indifference, apathy. Shlomo Grofman, co-vice chairman of March of the Living International, said: “Iran is the Hitler of today. The March of Living is an expression of always remember and never forget.”

David Machlis, March Of The Living International’s other co- vice chairman, explained, “This year will be first time we will be honoring [U.S.] liberators.” Rick Carrier, a World War II liberator who at the age of 20 was the first Allied soldier to enter Buchenwald, where Elie Wiesel and Israel Meir Lau, former chief rabbi of Israel, were prisoners, told the 60 guests, “Nobody can ever deny what I saw with my own two eyes!” Lau praised MOTL for “creating a deeper commitment to Israel among the student participants” and “ensuring that the eternal light of the Jewish people…will not be extinguished.”

MOTL is an international educational program that gathers students and Holocaust survivors to march to Birkenau from Auschwitz on Holocaust Remembrance Day. Following their visit to Poland, many participants travel to Israel to celebrate Israel’s Independence Day.

Prosor recalled his own MOTL trip: “I was a young diplomat in Germany. My father is from Germany. It was a journey into my own past. Standing in Auschwitz and Birkenau, hearing survivors speak while standing in their own barracks, [the song] ‘*Am Yisrael Chai *’ gains a whole new meaning. Today we have the State of Israel. I walk the corridors of the United Nations tall and proud. I know who and what I represent. We are Jews — always! Always!”

Jill Wagner, a general assignment reporter for News 12 Long Island, confessed that she grew up in Jericho, N.Y., thinking “the whole world was Jewish.” Marie Noel, a Haitian-born African-American student from the College of St. Elizabeth and a graduate of the march, explained how the trip heightened her commitment to the lessons of the Holocaust and the need to combat anti-Semitism.

A film clip from a 1990 MOTL documentary shows Wiesel at Buchenwald, declaring: “I see the children crying… I will never forget the children who had no energy to cry.” In Yiddish he laments, “Vu nemt men di trern tzu baveynen zey [Where does one find the tears to lament them?]? I am afraid to tell you what I saw…. You will break out in tears [that] never stop.”

The evening’s honored guests included Phyllis Greenberg Heideman, chair of the International MOTL Advisory Board; Rabbi Marc Schneier, president and co-founder of The Foundation for Ethnic Understanding; Arthur Schneier, senior rabbi at Park East Synagogue, and Ken Mehlman, a former chairman of the Republican National Committee who is currently head of global public affairs at Kohlberg Kravis Roberts & Co. and a Trustee of the United States Holocaust Memorial Museum.

“This is our most successful event. We’ve had to turn people away!” Hidden Child Foundation Vice President Rachelle Goldstein said to the overflow audience at the eighth International Rescuer Day tribute, held at the Anti-Defamation League’s New York headquarters. Honored at the January 18 event were Hadassa Carlebach, the Schneerson family and the people of Italy, “a country of many resistors.”

In her comments introducing the documentary film “A Debt to Honor,” Karen Friedman Sutton, professor of modern European history and humanities at Touro College, noted that though Poland lost 80% of its Jewish population and Lithuania lost 90%, in Italy, 85%, or 45,000, of the Jews survived; 7,500 died in the Holocaust. “The Italian soldiers were not as meticulous as the French in rounding up the Jews,” Sutton said. “Until Italy’s capitulation on September 8, 1943, not a single Jew had been deported…. There are stories that [under the German occupation] Italians carried little babies across the mountains…. Nuns, priests, intellectuals, peasants saved Jews…. The Germans were irritated when, after the 1943 German occupation, Mussolini stalled, put the murdering of Jews on the back burner.”

The Italians did not baptize the children they saved. Jews were given Italian family names. Four thousand Jews were hidden in convents and monasteries in Rome. The film profiles a baby sitter who rescued three children while the parents were being arrested. Jews in Italian-occupied Croatia, Sutton said, “were set free.”

Carlebach was a teenager under the Occupation when her parents, Sarah Schneerson and Rabbi Zalman Schneerson, sheltered 120 children, rescuing them from the German terror and from the Nazi-sympathizing French militia. Carlebach described her father’s superhuman efforts to save Jews: “Every attempt was made to restore a sense of home — a place of love, faith and Yiddishkeit.”

Mordecai Paldiel, a former director of the Righteous Among the Nations department at Yad Vashem, described his astonishment when Carlebach contacted him eight years ago. “I had never worked with Jews who saved Jews!” he exclaimed. Another surprise was the address by Bertha Schwarz, who was rescued by the Schneersons. She described the family’s lifesaving efforts.

The UJA-Federation of New York’s annual Generosity Signature Event, held on January 19 at Capitale, should put to rest any angst about the future of Jewish philanthropy. More than 700 philanthropists in their 20s and 30s sipped “Generositinis” — a cleverly named blue drink with ingredients that, I am told, include vodka. There were raffle tickets that could be used to obtain a Generosity shot glass and, in exchange for one such ticket, a volunteer asked that you listen and learn about a UJA project. This being a “young” philanthropists’ event, participants took to their cell phones and started sending in pledges alongside messages of appreciation and thanks. Received pledges were displayed on a screen for all to see; $85,000 of the total $230,000 was raised via text donations.

For many committee members and volunteers, as well as the event’s co-chairs — Jackie Friedman, associate planner at Bloomingdale’s; Lisa Richenstein, photo and art coordinator at Talbots, and Jerome Schapiro, vice president of One William Street Capital Management — it was a night to celebrate a year’s worth of hard work. The evening ended on a sweet note, with attendees gathered around an impressive dessert table.

March of the Living Reception Hosted by Israel Ambassador