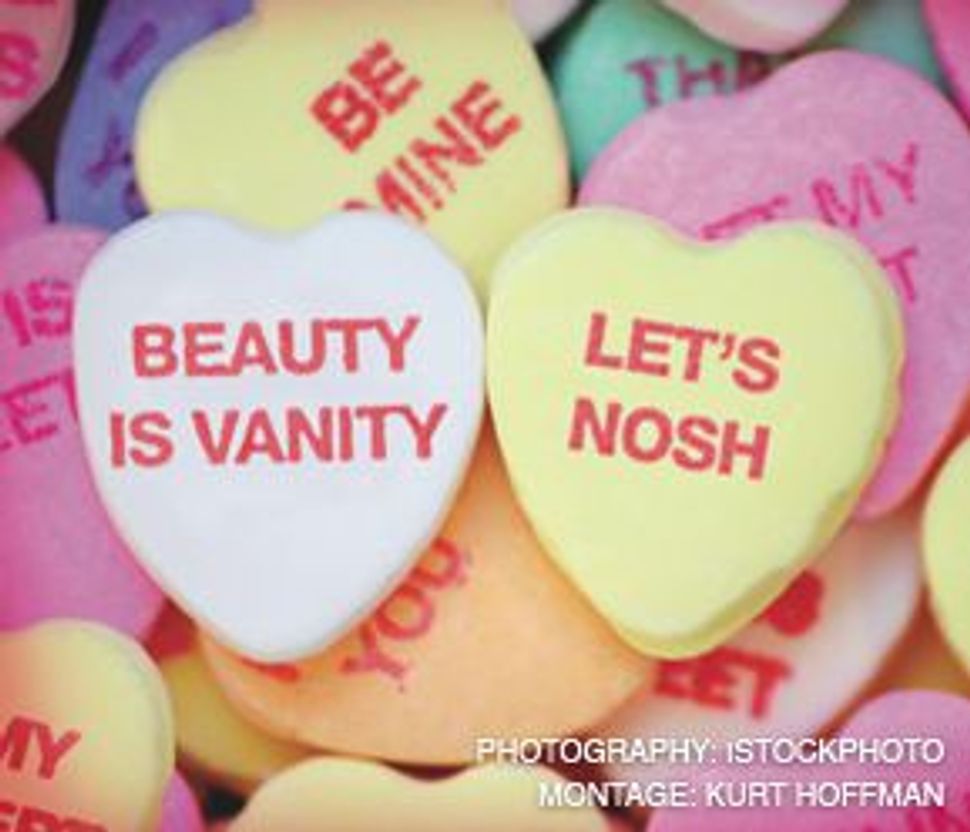 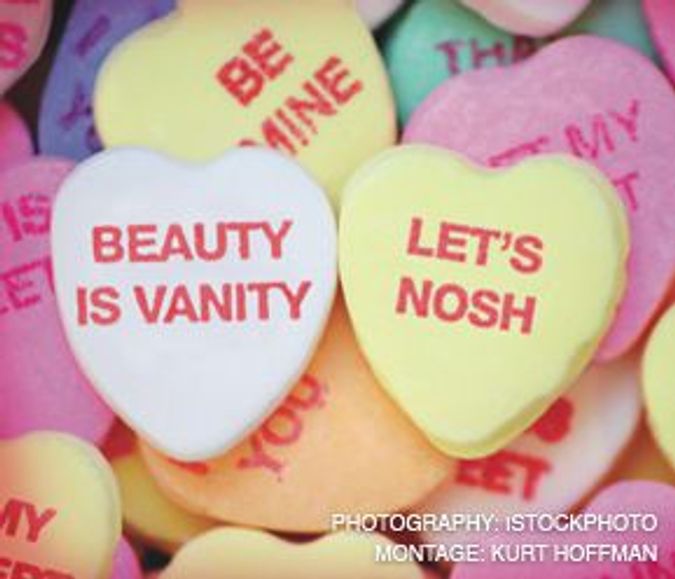 When I have a girlfriend, the day carries the weight of obligation: What to do? Are candy, flowers, a card and a nice dinner enough? Does my girl want something wildly elaborate, elegantly tasteful, or imaginative and innovative? If I’m going to make all that effort, what should I expect in return, and how annoyed should I be if I don’t get it? And what do I do if we’ve just started dating, and the relationship’s not yet serious enough for the full love-love-love that the world expects us to expect?

If I’m not seeing anyone, V-Day is even worse. When I’m riding solo, it seems like everyone else in the nation has a honey to hug. Not only is Val Day itself a party to which I have no invitation, but the next day, a friend, relative or co-worker will tell me about something wonderful that his or her loved one did, while I stayed home and tried to avoid TV shows full of violin music, red bunting and people dressed as Cupid.

Thank God, and whichever sages made the rule, that Valentine’s Day isn’t a Jewish holiday. The whole thing seems to be a hand-me-down from the Roman fertility festival Lupercalia, which fell on February 15. “Each Lupercalia began with the sacrifice by Luperci [a group of priests] of goats and a dog.… The Luperci cut thongs from the skins of the [goats] and ran in two bands around the Palatine hill, striking with the thongs at any woman who came near them.” That’s straight from Encyclopedia Britannica. Don’t blame me if it sounds gross and weird. Maybe this year, I’ll go around slapping women with slices of bloody goatskin. Ah, tradition.

The Christians took over the holiday and turned it into Saint Valentine’s Day, largely because at least one of several possible Saints Valentine is believed to have been martyred on February 14. Never mind that these saints’ lives didn’t have much to do with romance.

Although members of the tribe don’t observe Valentine’s Day as a religious holiday, there actually is a Jewish equivalent: The 15th of Av, also known as Tu B’Av, which falls in middle-to-late summer. It seems to have evolved from the day during the Exodus when the Jews wandering the Sinai desert realized that the last of the generation that had walked out of Egypt had finally died, meaning that their descendants could now enter the Promised Land. A happy occasion, sort of, but not romantic.

Later, during the period of the Second Temple, Jewesses would attract guys on Tu B’Av by gowning up and dancing in vineyards; but they were supposed to say, “Do not set your eyes on beauty, but look at the family…. Beauty is vanity, but a woman who fears God, she shall be praised” — a bizarre buzz kill to come from someone doing the lambada in a winery. These days, Israelis have revived Tu B’Av as a Valentine’s Day complete with flowers and love songs, but most Jews elsewhere continue to do with the holiday what they’ve done for nearly 2,000 years: ignore it.

And a good thing, too. If Tu B’Av were a major holiday, we’d have to listen to rabbis give sermons full of romantic advice — which, to judge by most rabbinic sermons, probably would have guilt attached. We’d be sentenced to recite something like, “Blessed art Thou, Lord God, King of the Universe, for commanding us with Thy commandments to strut about the bedroom in a red silk teddy.” And the food! Hanukkah has latkes, Purim has hamantaschen and Passover has matzo, but what would a Jewish Valentine’s Day have — chalky little pastel hearts bearing cutesy-poo messages like “Be My Beshert” or “I Kvell For You”?

Not for me, thank you. When Jewish traditions offer us a cherubic and nearly nude baby boy, we don’t give him an arrow and tell him to shoot it at our hearts — we circumcise him.

It’s always been that way. The Bible offers no sexy tales of courtship between Abraham and Sarah or Moses and Zipporah. And the love stories that it does tell are pretty messy. Samson was crazy about Delilah, and we know where that got him. King David fell for Bathsheba so hard that he arranged to get her husband killed. Esther bedazzled poor, dumb King Ahasuerus to the point where he would do whatever she wanted. But did Esther love him back? It doesn’t seem so.

The Bible does have famous passages about coupling, but they’re not a ringing testament to romance. “It is not good for the man to be alone,” God admits in Genesis, but he adds, “I will make for him a help meet” — not a soul mate or sweetheart, but someone to give a hand with the chores. “Whither thou goest, I will go; and where thou lodgest, I will lodge; thy people shall be my people, and thy God my God.” All this came not from lover to lover or groom to bride, but from Ruth the Moabite to her mother-in-law — not the sexiest or most sentimental of relationships.

Even the Bible’s most romantic book — the Song of Songs, which is Solomon’s — is more Jewish than it is Valentiney. Its overt message is “I love you, I need you, I’m yours,” but from the first chapter (“Tell me, O thou whom my soul loveth, where thou feedest”) to the last (“Make haste, my beloved, and be thou [upon me] like a gazelle or a young hart upon the mountains of spices”), the subtext says, “Let’s nosh.”

Other holidays fit much more easily within Jewish tradition: New Year’s Eve is Rosh Hashanah with fewer prayers and more drinking; Mother’s Day and Father’s Day conform to the commandment about honoring thy mom and dad; the Fourth of July encourages us American Jews to reflect on how fortunate we are to live in a nation where freedom of religion is as fundamental as the floors beneath our feet, and where pogroms never caught on as a fun way for townsfolk to spend a Sunday afternoon.

But Valentine’s Day? The best thing about it is the half-price chocolates that go on sale February 15. (I sometimes feel the same way about Easter, by the way.) I can live without it.

That is, I can live without it, unless by the time this article hits print, I’m deep in a relationship with a woman who’s crazy for Val Day. No, honey, I was just kidding with the “I hate Valentine’s Day” line. I love it as much as you do. Really. Honestly.

David Seidman is an author, editor and publicist living in Los Angeles. He hopes that by the time this story sees print, he will have a very understanding girlfriend.