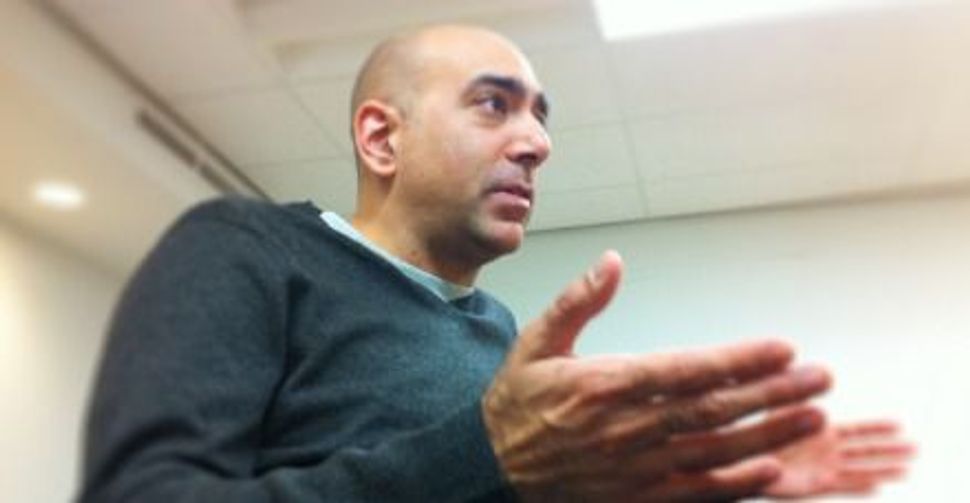 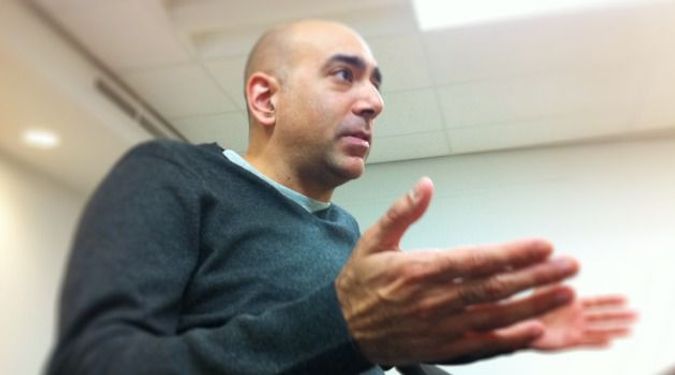 Fiery Rhetoric: Ali Abunimah, a co-founder of the Electronic Intifada news site, told a national conference that Palestinian advocates have the upper hand in their fight against Israel. Image by peter tobia

A prominent Palestinian rights activist said Saturday night that the recent fury around the first national conference advocating a boycott of Israel, being held at the University of Pennsylvania, signifies that the Mideast conflict is at an “end game.”

“This insane hysteria about the conference tells us something about the moment we are in,” said Ali Abunimah, a co-founder of the Electronic Intifada news site, in his keynote speech at the conference. “In terms of the battle of ideas, we are in the end game.”

The three-day conference, which continues today, focuses on the BDS movement — the initiative to boycott, divest from, and implement sanctions against Israel. The conference has caused a stir in the Jewish community in Philadelphia, with local Jewish leaders organizing a counter speech on Thursday by Alan Dershowitz, a Harvard law professor and a defender of Israel.

In his remarks, Abunimah was referring to Ruben Gur, a professor of psychiatry at Penn, who likened the organizers of the event to “Nazis” and their Jewish participants to “Capos” in a column that was published in the Daily Pennsylvanian, Penn’s student-run newspaper.

“A relevant precedent for such a movement is the groups organized by the Nazis in the 1930s to boycott, divest and sanction Jews and their businesses,” wrote Gur. “Sadly, now as then, there are Jews among the posse in the assault on their own people. The macabre sight of the likes of Stella Kübler, [arguably Hannah Arendt] and the Capos in the extermination camps is about to be replayed here at Penn.”

Abunimah told the crowd gathered at the university’s Meyerson Hall, “We have seen the vilification and the pressure on the university to prevent [the conference]. I think it is for a simple reason. If our ideas are tested against each other in an equal forum, there is no defense for what Israel is doing.”

In spite of the inflamed rhetoric, Penn was a picture of civility on Saturday. There were no protesters defending Israel at the event, and the question and answer session after Abunimah’s speech—a forum which, on the topic of Israelis and Palestinians, typically lends itself to heated exchange—was tranquil in tone. Outside the lecture hall, conference organizers displayed brochures and had t-shirts for sale on tables they had set up.

The Jewish Federation of Greater Philadelphia responded to the BDS conference by hosting Dershowitz’s speech at the university. According to Philadelphia’s Jewish Exponent newspaper, Dershowitz lauded Penn for its commitment to free speech, saying: “The BDS conference gives us an opportunity to respond to hate with positive messages.”

Before Dershowitz spoke, a letter from Penn President Amy Guttmann was read aloud by David Cohen, chairman of the Penn Board of Trustees. It said, “a commitment to open expression is fundamental to a great university like Penn. Occasionally that commitment gets tested, and that will certainly be the case this weekend.” She went onto say, “it is important that you all know that we have been unambiguous in repudiating the positions that are espoused by the those supporting that conference… we are unwavering in our support of the Jewish state. Let me say it in the clearest possible words: we do not support the goals of BDS.”

According to Mondoweiss, a Jewish blog critical of Israeli policy toward the Palestinians, the Penn BDS group asked Guttmann to respond to Gur’s column. Guttmann issued a statement through her press secretary, Stephen MacCarthy:

“It is… neither possible, nor consistent with the value of free expression, for me or the Administration to intervene in the exchange of words that will inevitably occur in the context of highly controversial and deeply emotional issues,” the statement said. “It is not an appropriate role (nor that of the University’s), to be the referee of individual’s comments, regardless of how overheated or ill-advised they may be.”

The Jewish Exponent, Philadelphia’s Jewish newspaper, said that Penn BDS was acting counter to the tenets of free expression when conference planners barred a reporter from that paper from attending the event. In a clarification on its web site, Penn BDS said that the Jewish Exponent’s reporter “displayed not only a strong bias against the conference and BDS (which was to be expected), but unfair and unprofessional reporting.” Penn BDS organizer Matt Berkman told the JTA that he was willing to consider admitting another reporter from the paper.

“It is ironic that a group that purports to be interested in open dialogue, is operating under the cover of free speech and insists it is not anti-Semitic, is barring the only Jewish news outlet in town from covering the conference,” Lisa Hostein, The Jewish Exponent’s executive editor, said in an article published on the paper’s website.

A Forward reporter was allowed to attend the conference’s sessions without incident.