Schneiderman Gets Used to the Spotlight 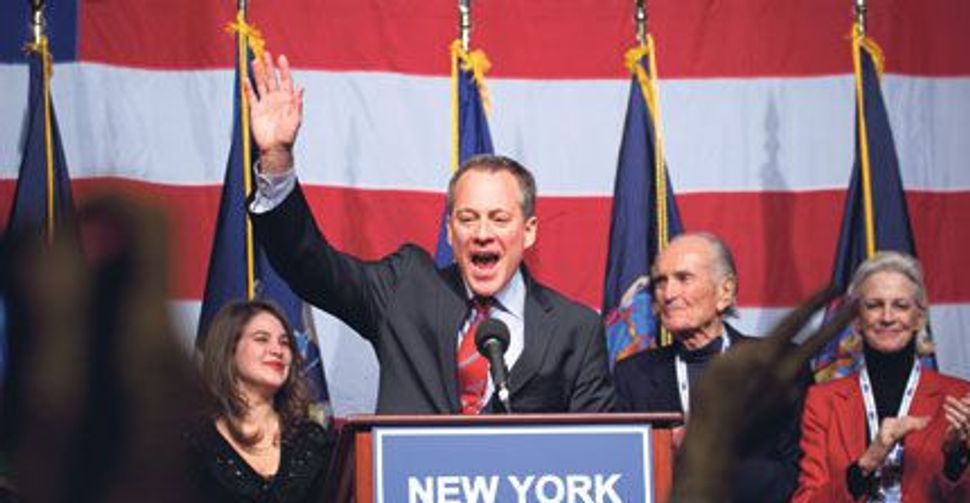 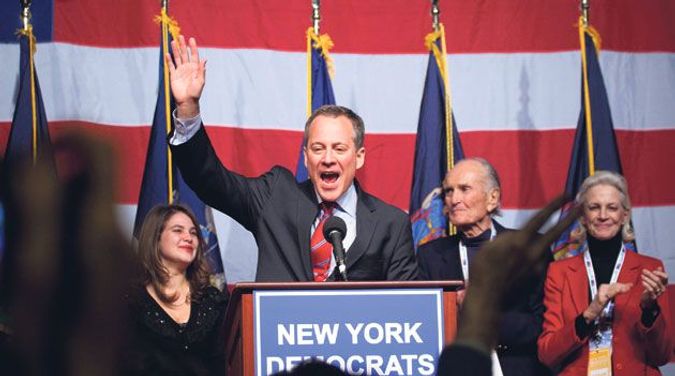 It was a Friday night in February at Manhattan’s Central Synagogue, and Eric Schneiderman should have been pleased with himself.

The New York State attorney general had just had one of the most important weeks of his career: The previous day, he and other state attorneys general had announced a settlement with big banks over bad mortgage foreclosure practices — a deal that Schneiderman had blocked for months before forcing a change to allow further claims against the banks.

And then there was the announcement made at the State of the Union a few weeks earlier that Schneiderman would co-chair a multi-agency task force to investigate the mortgage crisis, a move that gave the onetime state senator a public profile for the first time in his life.

But all this newfound prominence wasn’t resting easy with Schneiderman.

“I really in many ways am a very private person,” he said, sitting in a basement room after an address to Central’s wealthy and prominent congregation. It had taken 10 minutes to extricate Schneiderman from the crowd of well-wishers that swarmed him after his speech. “It’s a little odd to become more and more well known,” he said. “I wouldn’t say I’m uncomfortable with it. It’s new. I’m getting used to it.”

Schneiderman has won big victories before. But though he has been in the public eye since he was elected to the State Senate in 1998, the progressive Jewish Democrat from Manhattan’s Upper West Side has always been more or less a background player, and something of a cipher.

An ambitious politician, he is uncomfortable talking about himself. Though he dated a television star, he never shows up on the gossip pages. And while he is a highly visible Jew who speaks in public about how his religion informs his politics, in private he is reluctant to give details on how he came to Judaism relatively late in life.

Schneiderman, 57, is a conventional-looking middle-aged lawyer with buzzed, graying hair and a sharp widow’s peak. His biography reads like any Wall Street hotshot’s: son of a prominent securities attorney; graduated Trinity School in Manhattan; attended preppy Amherst College, then Harvard Law. But instead of making it in business, Schneiderman fell under the sway of Jerry Nadler, the longtime Upper West Side congressman who is now perhaps the most powerful Democratic kingmaker in New York City.

The two met in 1987, when Nadler was a state assemblyman and Schneiderman a staffer for Mel Miller, then the assembly’s Democratic majority leader. Schneiderman had formed a committee to raise money to win the Republican-dominated Senate for the Democrats, an unpopular cause even among the Democratic leadership, which was entrenched in the Albany status quo.

“I was very impressed with that,” Nadler remembered. “Especially because he was on the staff of someone who was not particularly sympathetic with that goal.”

The campaign would become a crusade that Schneiderman would fight and ultimately win two decades later. But first Schneiderman went into private practice, though he remained in touch with Nadler. Schneiderman joined the Community Free Democrats, Nadler’s Upper West Side club, and began hanging around with the slightly older Nadler and the slightly younger Scott Stringer, now Manhattan borough president, who took Nadler’s assembly seat in 1993, when Nadler went to Congress.

Those intermediary years were times of personal discovery for Schneiderman. In a recent interview with the Forward, Schneiderman said that his parents had not been religious Jews. In fact, the Forward reported in 1998 that Schneiderman’s mother had converted to Christianity and that Schneiderman himself was baptized at St. George’s Cathedral, an Episcopal church on 16th Street. But now, at least in public, Schneiderman describes Judaism as a driving force in his political philosophy.

“The Constitution of the State of New York doesn’t really define the role of the attorney general,” Schneiderman noted in his February 10 address at Central. “I do have to serve as the state’s lawyer and defend the state, but in areas of pursuit of justice, or affirmative litigation areas, the constitution does not tell me what my mission is or what the scope of my duty is… In the absence of constitutional authority I have chosen to look to another set of books to tell me what the goals of my office should be,” he said, meaning the Hebrew scripture. “Books in which we are directed to seek justice and justice alone.”

Asked afterward how Judaism wound up being so central to his life, Schneiderman was vague. “It really was as an adult that I started to get engaged,” he said. “I think it was really more just a determination I made over time, and I read a lot.” He would not cite specific books that had impacted his thinking.

Schneiderman joined Congregation B’nai Jeshurun in the mid-1990s, then a fast-growing Upper West Side synagogue known for its progressive politics. Nadler is also a member.

By 1998, when Schneiderman decided to leave private practice for public office, he had both Nadler and Stringer supporting his State Senate run. Former New York City mayor Ed Koch remembers taking him to visit senior centers.

And though one Democratic opponent had a letter supporting his candidacy from a B’nai Jeshurun rabbi, Schneiderman won handily. Once in Albany, he took over the party committee tasked with orchestrating the Democratic push to win Senate seats in 2000.

“He went way beyond what had been done previously,” Nadler said of Schneiderman’s 2000 efforts. “It was the first modern, real campaign we’ve seen for the Senate Democrats.”

After moderate success in that election, Schneiderman quarterbacked then-State Senator David Paterson’s effort to unseat longtime Senate minority leader Marty Connor, seen as an important step in changing the culture of the Democratic Party in the Senate. Schneiderman hoped to succeed Paterson when he left the Senate to serve as lieutenant governor under Eliot Spitzer, but he lacked support among his fellow members, and by the time Democrats actually won the majority in the Senate in 2008, he was more or less on his way out.

Though he had been mentioned as a potential attorney general candidate as early as 2002, Schneiderman considered running for Manhattan district attorney before deciding to take a shot at the attorney general seat in 2010.

Throughout the campaign, Schneiderman’s private life was barely noted, save a few scant details. Schneiderman copped to having tried marijuana and cocaine as a young man. It was known that his ex-wife, a lobbyist and Andrew Cuomo adviser named Jennifer Cunningham, was involved in his campaign. And it was known that he had been involved with actress Michelle Clunie from the Showtime drama “Queer as Folk” — the two had their first date at a Dominican restaurant in Schneiderman’s district — though Clunie campaigned for one of his Democratic opponents.

“He has his public life and his private life, and he tries to maintain a separation between the two,” said Avi Schick, a partner at the law firm SNR Denton who worked with Schneiderman in private practice and was the director of his transition team. “He doesn’t pepper his speeches with personal anecdotes. That’s not his style.”

Since Schneiderman’s inauguration in January 2011, fights over how to handle litigation over the financial crisis have dominated his public profile. From the start, Schneiderman was at odds with his own party over how to handle litigation stemming from the 2008 financial crisis. Top officials in the Obama administration hoped for a quick settlement to a major lawsuit brought by state attorneys general over bad foreclosure practices. But Schneiderman didn’t want to sign, arguing that the terms of the settlement gave banks broad immunity that ultimately let them off the hook.

His refusal to play ball brought down the wrath of his colleagues. Iowa’s attorney general accused him of seeking to “undermine” the settlement; the secretary of Housing and Urban Development spoke out against him in The New York Times. Schneiderman seemed outflanked.

And then, in early November, the White House called.

Two months later, Schneiderman was sitting behind Michelle Obama during the State of the Union address as the president named him co-chair of a new multi-agency task force to investigate the mortgage crisis.

He signed the foreclosure deal soon after. The newly reformed settlement does offer banks some protection from future lawsuits, and some critics have noted that the payments to individual homeowners will be no more than a few thousand dollars. But the immunity is far narrower than would have been provided in the original settlement, leaving a window for further lawsuits.

The shift had the appearance of a quid pro quo. But Schneiderman said that both developments stemmed from his success in negotiating the immunities. And that success, Schneiderman said, stemmed from a broader shift in public opinion, tied closely to the blossoming of the anti-corporate Occupy Wall Street movement.

“To me, the Occupy movement was just the most visible and flamboyant part of a truly grassroots outcry for accountability and for one set of rules for everyone,” Schneiderman told the Forward. “There was this sense that we had lost that essential American belief that ours is a system in which no matter how powerful or rich you are, or what public office you hold, you’re still held accountable under the law, and I view Occupy as just one aspect of a much broader swing in broader sentiment.”

Schneiderman’s New York offices are catty-corner to Zuccotti Park, the downtown square where Occupy protesters set up camp in mid-September. His office window overlooks Broadway and afforded a perfect view of the demonstrations. “We’d be like, oh, 5:00, here come the drums,” Schneiderman said.

Whatever the cause, Schneiderman’s victory in the foreclosure negotiations paves the way for further investigations and prosecutions by the joint task force.

“We got off track in America,” Schneiderman told the Central audience. “I believe honestly in the last few months we have set things right.”

In a little more than a year, Schneiderman, the lone holdout, had been transformed from a lowly state senator to a nationally prominent progressive standard-bearer, broadly seen as pushing Obama and the Democrats to take on Wall Street.

But that strict division between his personal and professional lives could grow harder to maintain as Schneiderman’s profile grows.

“I ran for this wonderful office, it’s the best job I can imagine having, and I don’t for a minute take it for granted,” Schneiderman said. “Starting to get more recognition I guess is a good thing, but it takes some getting used to.”

Schneiderman Gets Used to the Spotlight