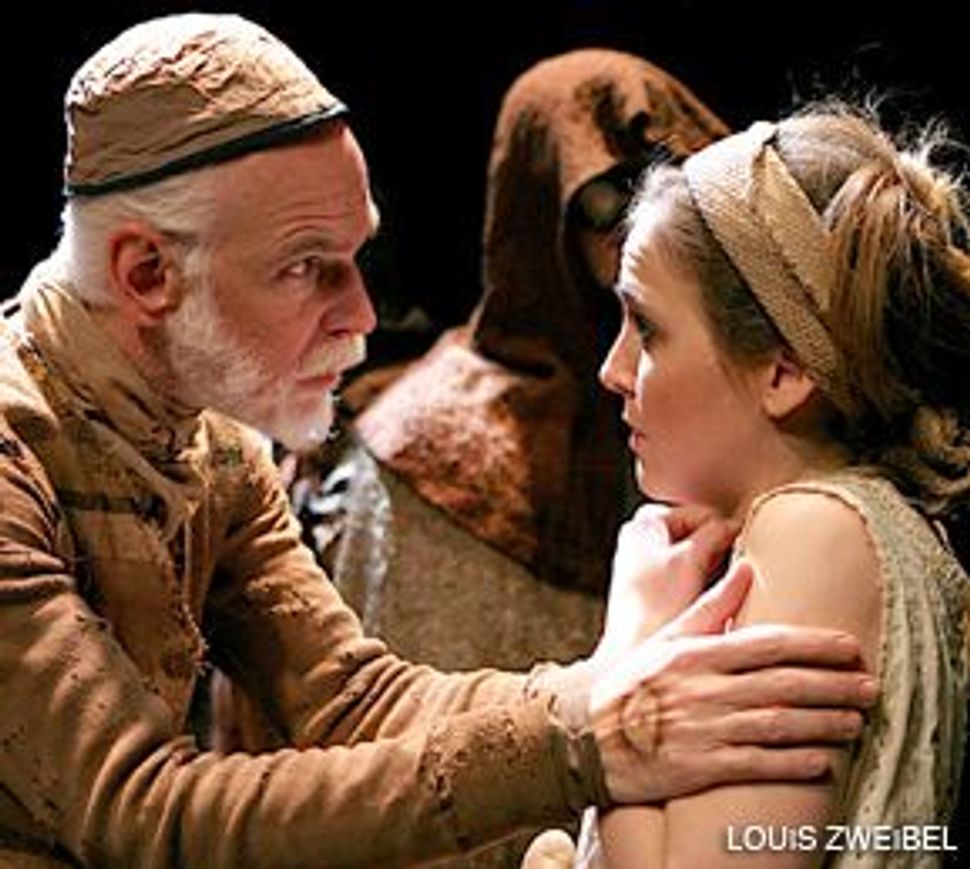 ON STAGE: Andrew Dawson, left, and Alison Frederick starred in the recent production of ?Dammerung,? presented by the New Worlds Theatre Project.

It’s a funny thing, the way a young artist’s raw vitality is often forgotten in posterity, obscured by the seemingly tamer, more popularly appealing self that emerged later. Seven decades after “Our Town” was a Broadway hit, for example, almost no one remembers Thornton Wilder as an experimental dramatist, though he once was one. These days, we perceive him through muffling layers of homespun hokeyness. 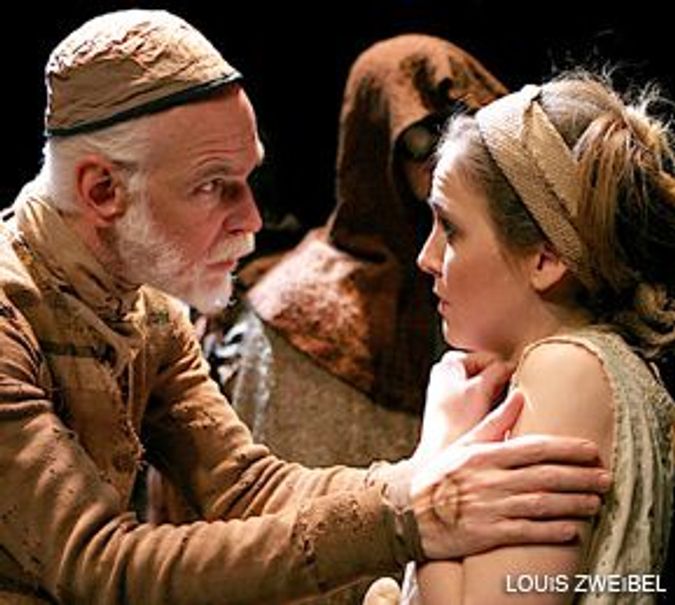 ON STAGE: Andrew Dawson, left, and Alison Frederick starred in the recent production of ?Dammerung,? presented by the New Worlds Theatre Project.

It’s not so surprising, then, that the same thing happened to Yiddish playwright Peretz Hirshbein (1880–1948), who is most remembered — when he is remembered at all — for the sweet pastoral comedy “Green Fields.” The play, the first part of what would become a trilogy, made its New York premiere in 1919, at the Irving Place Theatre, where its story of bickering rural families in the Old Country was a hit. English translations of the script are still easy to find in anthologies, and the Yiddish film adaptation, released in 1937, was screened in New York this past fall as part of the Museum of Modern Art’s “Hollywood on the Hudson” series.

So approachable is the tale, complete with yearning young lovers and straightforward reassurance that country folk are just as good as city folk, that you’d never guess its writer was an innovator, a key international figure in the Yiddish art theater of the early 20th century who was dubbed “the Yiddish Maeterlinck.”

Enter, stage left, New Worlds Theatre Project, whose raison d’être since its inception in 2005 has been the resuscitation of what it calls classic Yiddish plays in English-language adaptations. But the New York-based company’s slogan declares that “it ain’t your Bubbe’s Yiddish theatre,” and its definition of “classic” has not embraced Yiddish plays that are already somewhat familiar to English-speaking audiences, such as S. Ansky’s “The Dybbuk,” H. Leivick’s “The Golem” and Sholem Asch’s “God of Vengeance.” Its hunger is for more unusual fare. It unearths and presents for our delectation comparative obscurities by such writers as Asch and, most recently, Hirshbein.

“Who planted all this cruelty in mankind?” a girl asks her grandfather in Hirshbein’s “Dammerung” (aka “Tzvishn Tog un Nakht,” “Between Day and Night”), a short drama from 1906 that displays the playwright in all his symbolist glory. Last month, New Worlds staged the play at Theatre Row, from a script translated by Mark Altman and the company’s executive producer, Ellen Perecman; the adaptation is by Perecman, Clay McLeod Chapman and Marc Geller, the production’s director. Heavy on atmospherics (beautifully conjured by Geller), and suffused with dread of the encroaching unknown, it was a sort of slow, eerie riff on Maurice Maeterlinck, the Belgian playwright and quintessential symbolist who so strongly influenced Hirshbein.

“What is it?” the girl asks when her grandfather starts at a sound.

“I can hear them,” he replies.

She suggests he might merely be hearing the wind, or rustling leaves.

“No, it’s the beating of thirsty human hearts,” he tells her.

Maeterlinck, no stranger to grandfathers frightening their granddaughters when noises intrude, would be right at home. (Hirshbein paid even more direct homage to Maeterlinck in “The Amulet,” staged by New Worlds in 2006.) But even in Hirshbein’s naturalist works, the brutishness of human beings toward one another is a leitmotif.

“Dammerung,” which means “twilight,” pits the grandfather, his two granddaughters and his two sons against not only the outside world, but also each other, divided as they are about the goodness of their fellow human beings and about what is worth fighting and dying for. The grandfather (Andrew Dawson) clings to living his life as he always has, and believes in a punishing God. One of his granddaughters (Cally Robertson), following what easily could be interpreted as a Christian theme, is eager to sacrifice herself in order to “awaken the mercy in people’s hearts,” thereby stopping the bloodshed in the world.

“I am prepared to die for them,” she says. “I’m only waiting for my father to issue his command… I will spread my arms wide, I will go among the people, I will call out with all my strength: ‘Have mercy on one another, my brothers and sisters.’ They need only be reminded.” Later, she vows, “I will wash their wounds.”

In “Dammerung,” the themes swirl: the intractability of ruptures, the doom to which full-blown hatred leads, the pathetic young corpses left on the fields of endless battles, the fear of what is foreign to us. The play is about all these things, even as it is about the past and the future, and whether wide-eyed idealism or jaded pragmatism sets the better course.

But what about that Jesus Christ figure? Hirshbein was born in rural Poland, in the Russian Empire. According to a note in the New Worlds program, when Russian law permitted the formerly forbidden Yiddish theater to be performed again, in the years following 1904, it required that the scripts be translated for the censors. Was the imagery a sop to them? “Yes” doesn’t seem an impossible answer.

A couple of years after “Green Fields” opened in New York, another of Hirshbein’s pastoral plays, “The Idle Inn” (“Di Puste Kretshme”), was adapted into English for a Broadway production. A youngish Edward G. Robinson was in the voluminous cast. Hirshbein also wrote the script for Douglas Sirk’s 1943 film, “Hitler’s Madman,” about Czech partisans’ assassination of Reinhard Heydrich, deputy chief of the Gestapo.

But that’s as far into mainstream America as Hirshbein’s career went. Meanwhile, he wrote numerous plays for the Yiddish theater — whether 16 or more than 50 depends on the source. Whatever is the true number, one suspects that there’s plenty of material for further translations and adaptations. New Worlds Theatre Project surely will be on the case. And though the run of “Dammerung” is over, the script remains. Perecman has published “Dammerung,” along with adaptations of Hirshbein’s “The Amulet” (“Af Yenem Zayt Taykh”) and “Carcass” (“Neveyle”), and plays by Asch, Sholem Aleichem and I.D. Berkowitz, in a collection called “Selected Yiddish Plays: Vol. I” (iUniverse, Inc., 2007).