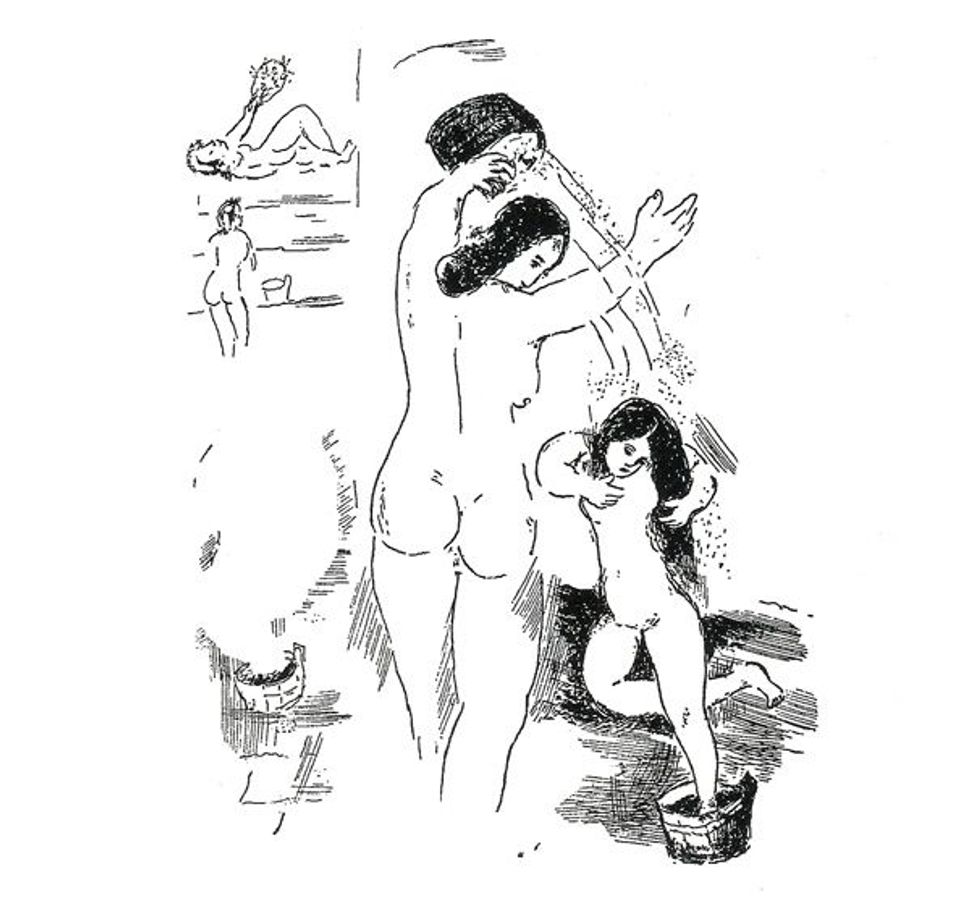 Suspended in white space, a goat romps and a rooster struts across a modest book cover. Beneath them, running right to left, is the Yiddish word “mayselekh” — less a title than a simple description of what’s inside: two little stories for children. The book, which is more like a pamphlet, is small enough to slip into a greeting card envelope. Inside are 15 pages of rhyming Yiddish verse, plus eight black-and-white drawings. The book was printed in Petrograd, published in Vilnius (commonly known to Jews as Vilna) in 1917 and written by Der Nister, pen name of the avant-garde Yiddish writer Pinkhes Kahanovich (1884–1950). The illustrator is Marc Chagall.

The celebrated 20th-century Russian-Jewish artist is getting lots of attention these days. The exhibit Chagall and the Artists of the Russian Jewish Theater, 1919-1949, is currently on display at New York City’s Jewish Museum. Jackie Wullschlager’s new book, “Chagall: A Biography” (Knopf, 2008), has just joined the vast collection of Chagall studies. Critics typically hail his early paintings and lithographs as brilliant breakthroughs, and downplay his later works as sentimental, nostalgic and recycled efforts.

Less frequently discussed are the illustrations Chagall contributed to Yiddish books, starting with Der Nister’s little pamphlet and spanning seven decades. Of varying artistic merit, these works open a window to the modern Russian-Jewish art and literature that briefly flowered, withered and died with their creators and their audience. “These artists and writers were very conscious of trying to create a modern version of Yiddish literature, one that used tradition but was not mired in it, that wasn’t nostalgic, something that was more progressive and experimental,” said Eddy Portnoy, Yiddish-language instructor at Rutgers University and frequent Forward contributor. With his fame and his accessible art, Chagall is our fraying and fragile connection to these Yiddish artists and writers.

Around 1910, when he was in his early 20s, Chagall left his birthplace of Vitebsk, Belarus, to live in an artists’ colony in Paris. Following his first solo show in Berlin when he was 27, Chagall returned to Vitebsk in 1914 for a visit and got stuck there with the outbreak of World War I. In 1920 he moved to Moscow, where he lived in and taught at a Jewish orphan’s colony. He finally left Russia for good in 1922, when he returned to Berlin. In 1923, he moved back to Paris.

Russia in those years was rocked by social, political and cultural upheaval. The country opened up to new art and literary movements, and Yiddishists drew upon these to create a secular Jewish modernism. “There was an explosion of liberty and fresh thinking in which everything was up for grabs,” said David Mazower, who is the great-grandson of the Yiddish writer Sholem Asch and writes about Yiddish culture and Jewish art for the online publication The Mendele Review. The Soviet government actively recruited Yiddish writers and artists, and employed them as state propagandists. Chagall himself was appointed “Plenipotentiary on Matters of Art in Vitebsk Province,” and founded the People’s Art College, which attracted modern Russian and Jewish artists.

The war decimated Jewish publishing houses, but a handful of new publishers emerged, many connected to Kultur Lige, an organization founded in Kiev in 1918 to promote Yiddish culture, and to other groups of Yiddish artists and writers devoted to Jewish modernism. In addition to children’s pamphlets, Chagall contributed to the Yiddish literary magazines Shtrom and Khalyastre (Stream; Gang) in the early 1920s. These pamphlets and journals contained works of high art but were poorly produced in tiny print runs that reflected the poverty and ultimate impermanence of Russia’s oppressed Jewish minority. “We’re talking about a world that is like the theater of the oppressed,” said Seth Wolitz, an expert in Yiddish modernism on the faculty of the University of Texas at Austin. “It’s a miracle that they even found the means to get anything published.”

In Wolitz’s opinion, Chagall’s standout piece of graphic art appears in “Troyer” (“Grief,” or “Mourning”), an art book published in Kiev in 1922. A collaboration between Chagall and Yiddish poet Dovid Hofshteyn, “Troyer” is a cry of outrage against the ruthless destruction of Jewish shtetls in Ukraine during the Civil War pogroms of 1919 and 1920. Proceeds from sales benefited Jewish children orphaned in the pogroms.

The Chagall of “Troyer” is decidedly not the Chagall of floating lovers and errant violins. He depicts the murderous violence bitterly decried in Hofshteyn’s narrative poems, in images of swords, axes, mutilations and blood, done in spare graphics and representational Yiddish lettering. Most notable, according to Wolitz, is Chagall’s use of diagonal lines, characteristic of the suprematist school of art founded by his Russian rival, Kazimir Malevich. Suprematism represented the best of new Russian culture, but in “Troyer,” Chagall co-opted it to mock that culture and display its brutality. “This is protest in the highest style,” Wolitz said. He notes that Chagall never again used his art for polemic purposes.

After leaving Russia, Chagall continued contributing illustrations to Yiddish books published outside the Soviet Union, often as favors for friends. Scholars, such as Chagall biographer Benjamin Harshav, consider most of these to be unserious efforts, but they do see merit in a few. These include Chagall’s drawings for the memoir written by his wife Bella, “Brenendike Likht” (“Burning Lights”) (Schocken Books, 1946); Abraham Liessin’s three-volume set, “Lider un Poemen” (Forverts Association, 1938) and Abraham Sutskever’s “Di fidlroyz/Lider un Poemes” (“The Fiddle Rose: Poems,” published in Tel Aviv, 1974) and “Siberia” (translated edition published in London in 1961). Intended for a declining Yiddish readership, these books were printed in limited quantities and are scarce today, though a well-connected public library can track them down.

The Jewish modernist writers Chagall left behind in Soviet Russia, including Der Nister, were all dead by the 1950s, murdered by Stalin as Zionist traitors.

In the 1920s, Chagall and Der Nister were equally poised to emerge as artistic giants, author and Forward contributor Dara Horn noted in an interview with the Forward. But only Chagall, whose work was visual and did not require a translator, gained worldwide fame. Horn insists that the literature of Der Nister and his colleagues faded not because it was inferior, but because it lost its audience. She has come to doubt the common notion that the best art withstands the test of time. “These other artists had something important to say to us, and that hasn’t lasted. What lasts isn’t necessarily what’s best,” Horn said.

Yet, Russia’s modernist Yiddish writers still have the power to inspire those who, like Horn, have the wherewithal to crack their code. In 2006, she published her award-winning novel “The World To Come” (W.W. Norton & Company), about the theft of a million-dollar Chagall painting. Central to Horn’s story is a flashback to the friendship between Chagall and Der Nister, to the time after the First World War when they lived together in a colony for Jewish orphans in Russia and, with other Yiddish artists and writers, produced groundbreaking modern Jewish art.