The Pope Blinked, And Jewish Leaders Assess What’s Next 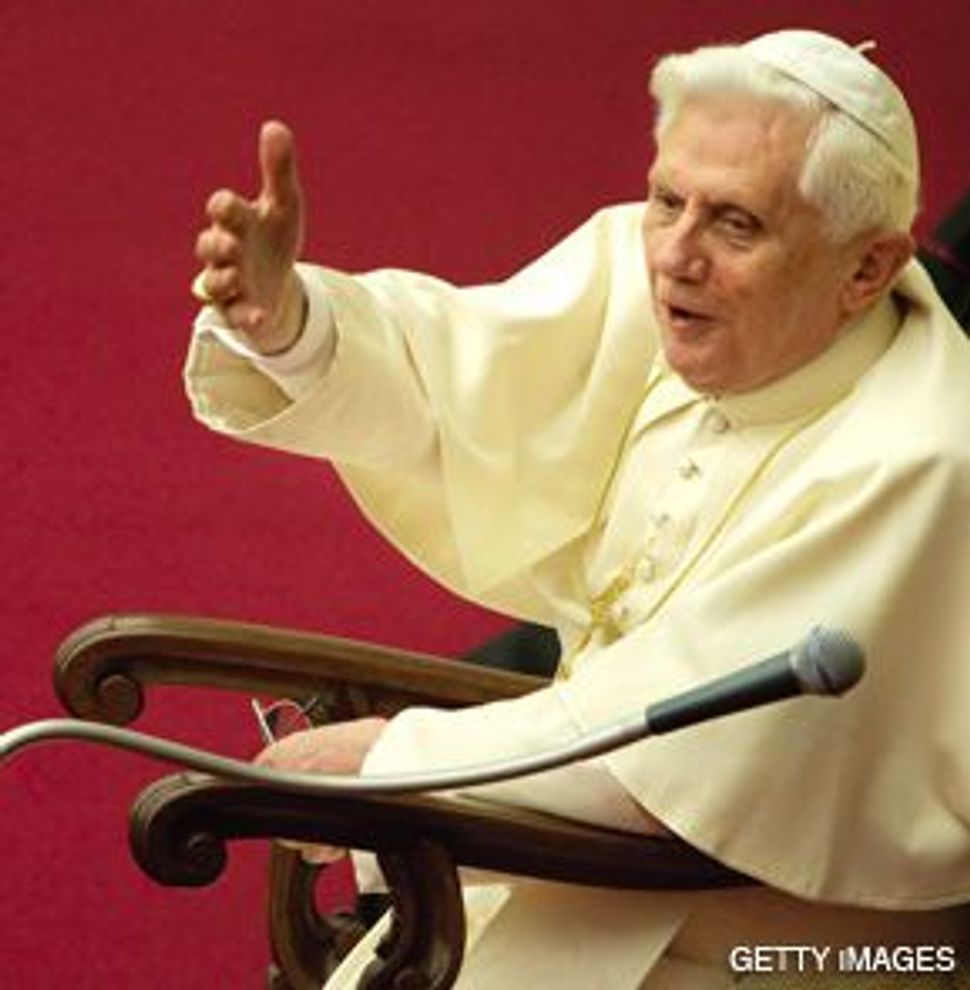 As American Jewish leaders headed off to Rome for a meeting with Pope Benedict XVI on February 12, there was no doubt about what was at the top of their agenda. 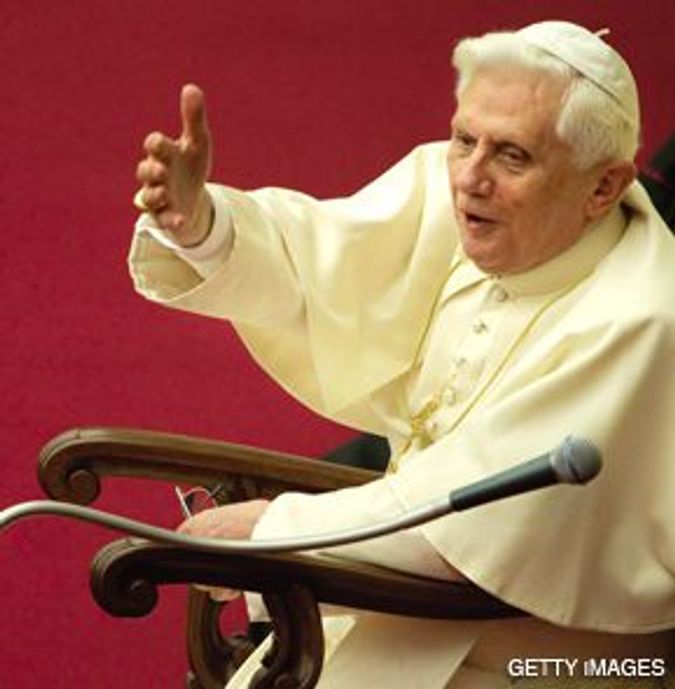 Just eight days earlier, in the face of public protests from world Jewry, German Chancellor Angela Merkel, 50 Catholic members of Congress and even — quietly — some of his own bishops, the pope blinked.

Bishop Richard Williamson, one of four renegade traditionalist bishops whose excommunication the pontiff had initially revoked, now faced a demand from the Vatican that he publicly renounce his views denying the existence of the Holocaust.

In a public statement, the Vatican’s secretariat of state also made clear that Williamson and his fellow traditionalist bishops would not be granted full communion with the Roman Catholic Church unless they accepted the teachings of the Second Vatican Council — the 1965 church convocation that, among other things, formally renounced the church’s longstanding view that Jews bore collective responsibility for the murder of Jesus Christ.

At JFK International Airport, while waiting to board a plane that would take him to Rome, Abraham Foxman, national director of the Anti-Defamation League, said he saw a rupture on its way to being healed.

“The Vatican realizes they’ve made a mistake, and they’re taking steps to fix it,” he told the Forward. “The good thing about this Vatican is that it fixes its mistakes.”

But Rabbi Eric Yoffie, leader of the Union for Reform Judaism, remained in New York as Foxman and other leaders of the Conference of Presidents of Major American Jewish Organizations flew off to their Rome meeting.

Yoffie was much less sanguine that the pope’s action had ended the crisis. “This incident has been a terrible blow to Jewish-Catholic relations,” he said. “For any pope, especially a German pope, to take a step that seems to mitigate Holocaust denial is ominous, especially at a moment when outbursts of antisemitism are on the rise throughout Europe…. This is serious beyond words.”

For many, the pope’s recent actions and ultimate backtracking revealed, at worst, a Vatican mired in bureaucracy and a pope oblivious to the effects of his actions beyond the papal enclosure.

But some harbored a darker, more alarmist view of the debacle: a pope with a reflex for tradition who was ultimately at theological odds with Vatican II, the church’s landmark embrace under Pope John XXIII and Pope Paul VI of humanism and ecumenicism.

Even Foxman was not totally immune to some concern. He noted that the Society of St. Pius X (known as SSPX) — the schismatic group to which the four ex-excommunicated bishops belong — broke with the Vatican precisely over its rejection of Vatican II.

“We need a clarification from the Pope about Vatican II and whether the society accepts it,” he said.

Foxman rejected the notion that the Vatican would back away from Vatican II. “But it can be chipped away,” he said.

He recalled the Jewish community’s last imbroglio with Benedict in 2008, when he reinstated a traditionalist Latin Mass that Vatican II had abolished. In its original form, the Tridentine Mass, celebrated since the 16th century, contained a Good Friday prayer for the conversion of “the perfidious Jews.”

Benedict XVI revived its use, with the contemptuous reference excised. But the Mass retained a prayer for Jewish conversion “so that those who were once your chosen people may reach the fulfillment of redemption” — a suggestion that the Jewish covenant with God was dead. This seemed to refute the historic affirmation by Benedict’s predecessor, Pope John Paul II, that it remained alive.

Foxman ruminated: “First you have a Latin Mass, then a call to convert the Jews. That would be catastrophic. It would take us back to the early ’60s, if not beyond.”

At their meeting in Rome, the Jewish leaders were expected to ask the pope why he brought into the church the four bishops whose group was intent on reversing half a century of increasing Catholic acceptance of Judaism.

Founded in 1970, within the church, by the late French archbishop Marcel Lefebvre, the SSPX, Catholic historians say, was animated by two impulses: to reverse Vatican II and to reject a key result of the French Revolution — the death in Europe of Catholic monarchy promoting papal fealty.

In 1975, Pope Paul VI ordered the increasingly strident group dissolved. Lefebvre ignored the edict, claiming it was Rome that had “lost the faith.” Lefebvre continued to say Mass and administer sacraments, and in 1988 he consecrated four bishops — acts deemed so rebellious that John Paul II excommunicated him and the new bishops.

It was this breach that Benedict sought to close on January 24, when he lifted the bishops’ excommunication.

Today, the SSPX has 500 priests worldwide and a membership between 100,000 to 200,000 in 30 countries. Impressive, perhaps, for an outlaw organization, but still only .02% of all Catholics. Within this group, no one cultivated beyond-the-fringe ideas as much as the British-born Williamson.

Williamson believes that the Holocaust was fiction and that the Nazis killed, at most, 300,000 Jews, and none in gas chambers; that Tony Blair and George W. Bush plotted the September 11 attacks to persuade Americans to invade Afghanistan and Iraq; that “The Sound of Music” is “pornographic soul-rotting slush”; that feminism is “intimately connected to witchcraft and Satanism”; that “almost no girl should go to any university,” because higher education “contributes to the unwomanizing of a woman,” and that the Protocols Of The Elders Of Zion, the notorious antisemitic forgery, was authentic — a warning that Jews are fighting for world domination “to prepare the anti-Christ’s throne in Jerusalem.”

In a February 4 statement, the Vatican’s Secretariat of State said the Pope was unaware of Williamson’s views. Skeptics noted Williamson had gone out of his way to make them known—and not just in a Swedish TV interview he gave shortly before the pope withdrew his excommunication.

Last March, for instance, The Catholic Herald, “Britain’s Leading Catholic Ne wspaper,” ran a front-page story — “Lefebvrists Face Crisis As Bishop Is Exposed As Dangerous Anti-Semite” – in which Williamson stated that The Protocols were genuine. The Herald then recapped Williamson’s previous statements.

In an ironic prognostication, Rev. Arnaud Selegny, the general secretary of the SSPX General House in Menzingen, Switzerland, told the Herald that Williamson would not be “an obstacle in any reconciliation” with the Church.

It is unclear how much the traditionalists conceded to win the pope’s revocation of their excommunication. The day Benedict lifted it, Bishop Bernard Fellay, the head of the Lefebvrist movement, declared, referring to his own movement, “Catholic tradition is no longer excommunicated.” He affirmed all the church’s councils — other than Vatican II.

The Church is now accepting bishops who “are thumbing their nose at Vatican II,” said Eugene Fisher, recently retired as director of Catholic-Jewish Relations at the U.S. National Conference of Catholic Bishops. The four bishops, Fisher said, should pledge to abide by the teachings of Rome and the strictures of Vatican II. “The bottom line is the integrity of the teaching of the church and the integrity of the truth,” including, Fisher emphasized, the historical truth about the Shoah.

The SSPX is clearly taking some steps. After the world uproar began, Williamson apologized to the pope for the “distress and problems” caused by his Holocaust denials — though not their substance — terming them “imprudent.” Nevertheless, one week later, on February 8, the SSPX removed Williamson as head of a seminary near Buenos Aires, noting that his statements did not reflect the position of the society.

A few days before that, the SSPX expelled another Holocaust denier in its ranks — Father Floriano Abrahamowicz, a pastor in northeastern Italy. Abrahamowicz — whose father, ironically, was Jewish — had called Jews “a people of deicide.”

But it remains unclear if Abrahamowicz’s sin was his timing or his substance: By the time he spoke, a similar deicide libel against the Jews had been expunged from the SSPX’s own web site — also an apparent effort by the group to accommodate the Vatican.

The Pope Blinked, And Jewish Leaders Assess What’s Next