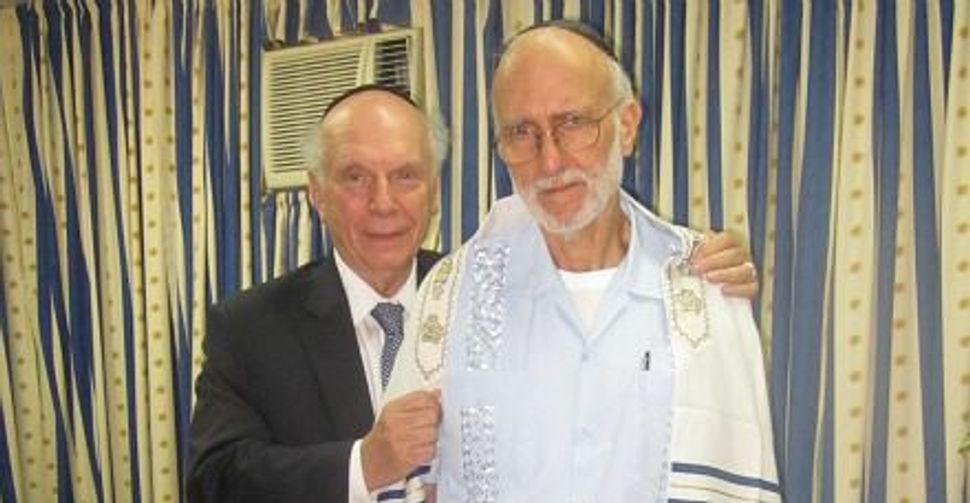 Image by appeal of conscience foundation 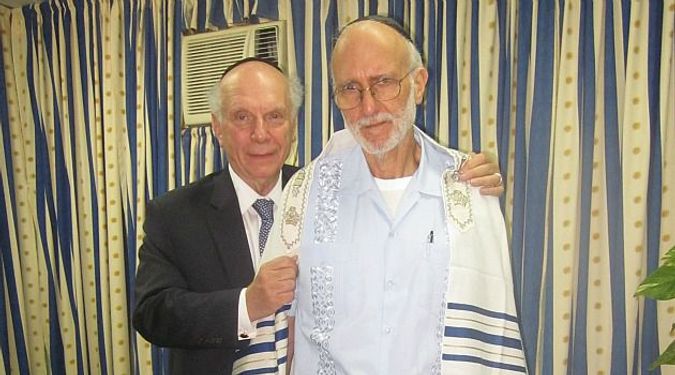 Jailhouse Visit: Rabbi Arthur Schneier meets this month with Alan Gross, right, at the Cuban jail where Gross is being held. Image by appeal of conscience foundation

The wife of Alan Gross, a State Department subcontractor jailed in Cuba, has launched a new strategy to win his release: ratcheting up the pressure on the United States government as well as on the Cuban regime.

After fighting for months to persuade the organized Jewish community to rally behind a humanitarian campaign to free her husband, Judy Gross has begun to publicly criticize President Obama and U.S. policy toward Cuba.

Her new approach comes as the Jewish community and others are calling on Pope Benedict XVI to appeal to Cuban leader Raul Castro for the prisoner’s release during the pontiff’s three-day visit to Cuba, which begins on March 26.

But Judy Gross is now taking a dual-pronged approach in her advocacy. Along with humanitarian appeals to the Cuban government, she has voiced “disappointment” in Obama and compared her husband’s plight to that of Rene Gonzalez, a Cuban-American who, convicted of espionage and currently on probation in Florida, wishes to visit his dying brother in Cuba. (On March 19, a federal judge approved Gonzalez’s request over the objection of the Department of Justice.)

Some observers say that leaning on the United States may just be the most effective way for Judy Gross to secure her 62-year-old husband’s release.

“I was very pleasantly surprised to see the change in tactics, and hopefully a change in overall strategy from Judy,” said a Jewish official very familiar with ties between the United States and Cuba.

The American Jewish official, who spoke on condition of anonymity in order to not jeopardize his group’s work, said that humanitarian appeals to the Cuban government were helpful. But Gross’s release would be secured only if both governments were pressured into bilateral negotiations.

“Anything short of that will not reap the results [Judy Gross is] looking for,” the official said.

Gross, a subcontractor to the State Department’s U.S. Agency for International Development, was arrested and jailed in 2009 while pursuing a USAID mission that involved smuggling high-tech communications equipment into Jewish community centers across the island. The Cuban-Jewish community, which enjoys emigration rights to Israel and frequent exchanges and visits with outside Jewish groups, disclaimed knowledge of or involvement in Gross’s mission. American Jewish groups have spearheaded humanitarian appeals to Cuba, where Gross is serving a 15-year sentence.

Gross’s supporters, including the Jewish Federations of North America and the Jewish Community Relations Council of Greater Washington, recently launched a petition calling on the pope to raise Gross’s case with Castro during his upcoming visit.

Gonzalez, the Cuban whose treatment Judy Gross compared to her husband’s, is one of the so-called Cuban Five, who were arrested on spying charges during the late 1990s. He must serve out his three-year probation in Florida.

The Justice Department had opposed Gonzalez’s request to return home to visit his brother, who has terminal lung cancer, saying Gonzalez might link up with Cuban intelligence officials.

As Gonzalez waited for a response from U.S. officials, Gross’s lawyer, Peter Kahn, requested that his client be allowed to return to the United States for two weeks to visit his 89-year-old mother, who is also dying of cancer.

Judy Gross told The Miami Herald that she appreciated Gonzalez’s need to visit a dying relative. “We need to remember that these are real people and real lives that are profoundly affected by these decisions,” she said.

Upon hearing of Gonzalez’s success, she released a statement saying that she was pleased. “I now hope that President Castro will grant Alan’s request to visit his ailing mother, Evelyn, who is suffering from inoperable lung cancer” Gross said. “Evelyn’s final wish is to see her son one last time.”

In a March 17 interview with the Forward, Judy Gross denied that she had linked the two cases. “All I am saying is I feel badly for him [Gonzalez],” Gross said, “and I do empathize with his position.”

She said that her husband, who suffers from arthritis, is in a “great deal of pain.” He has lost about 100 pounds since his arrest and in recent weeks has become increasingly depressed, she said.

Gross denied that she was incorporating a political element into her strategy. “I’m not a political person,” she told the Forward. Choosing her words carefully, she added that she would concentrate on humanitarian appeals and the forthcoming papal visit to Cuba to secure her husband’s release.

But in recent weeks, her statements have taken on a political edge. In a March 13 interview with Politico, Gross called her husband a “pawn” in a “failed policy” between the Cuban and American governments and said she was “disappointed” that Obama had not responded to requests to discuss her husband’s case with her.

The apparent shift in approach coincides with the intervention of a top Washington public relations company, Burson-Marsteller, in her husband’s campaign.

Burson-Marsteller contacted the Forward at the end of February, requesting that this newspaper highlight Alan Gross’s case. An employee claimed in an email that the State Department had asked the firm to support Gross’s case “on an urgent pro bono” basis.

Alan Gross was arrested in Havana while working under a $500,000 contract from Development Alternatives, Inc., a subcontractor of USAID. The State Department agency spends tens of millions of dollars each year on what it describes as “democracy-building” programs in Cuba. The Cuban government sees such activities as a threat to the regime.

By Cuba’s low standards, the island’s tiny Jewish community, which numbers about 1,500 people, lives a relatively free communal life. Jews are allowed to travel to Israel and practice Judaism. For about 20 years, American Jewish groups have sent humanitarian missions to Cuba, stocking them with kosher goods, medical supplies and technological equipment.

Alan Gross traveled to Cuba on the same flights as some of these groups while undertaking his USAID work. He told Cuban officials that he was on a Jewish humanitarian mission. He also asked some American Jews to carry equipment into the country for him.

Most of the equipment Gross took into the country, such as smartphones and laptops, is commonly available. But when he was arrested in 2009 he was carrying rare high-tech satellite equipment that is most often used by the CIA and the Defense Department.

The technology would have allowed users to access the Internet without being monitored by the Cuban government.

Gross was convicted last year of attempting to subvert or overthrow the government of Cuba. But the U.S. government and Gross’s supporters maintain his innocence.

“I won’t argue the complexities of the Cuban legal system, but he was convicted for activity that in any other country would be perfectly legitimate,” Ostick said. “He was helping connect citizens of Cuba with the outside world.”

Ostick condemned the Cuban laws under which Gross was convicted as “antithetical to international standards of human rights.”

Observers are baffled as to why the United States would want to equip Cuba’s Jewish community with material under a USAID program that usually targets dissidents. They say the Jewish community has good relations with the Cuban government and is too small and lacking in influence to be worth the investment.

Julia Sweig, a Latin America specialist for the Council on Foreign Relations, said USAID’s Cuban budget, which totaled $20 million last year, was like a “big trough.” Sweig said it was possible that Gross’s mission was useful only in as much as it satisfied Congressional demand to take action in Cuba.

With a November election looming, Sweig and other analysts say it is unlikely that the Obama administration will be able to make any overtures toward the Cuban regime.