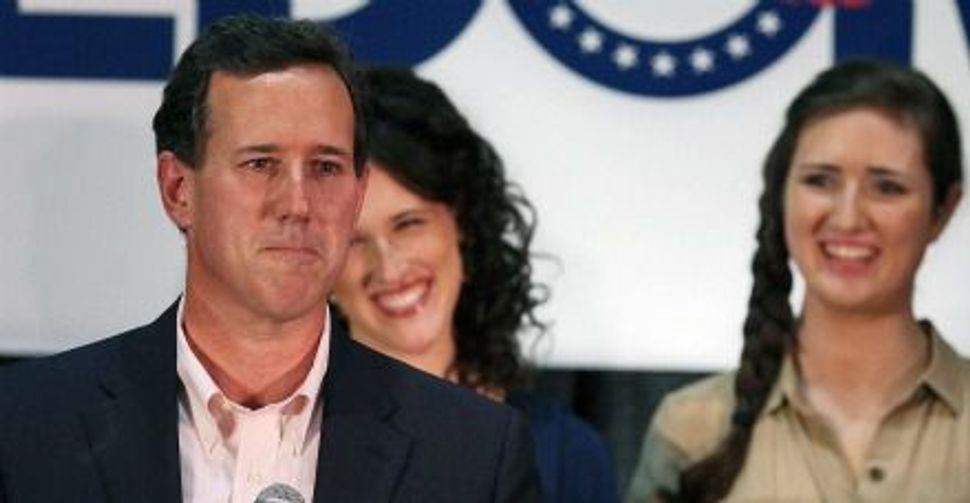 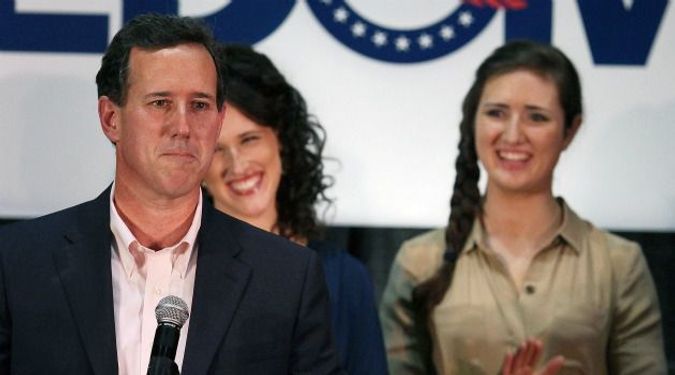 Family Man: Even if they don?t share his religion, Orthodox voters appreciate the fact that Republican presidential candidate Rick Santorum wears his faith on his sleeve. Image by getty images

While presidential hopeful Mitt Romney is the pick of the Republican Jewish establishment, Rick Santorum enjoys notable support among Orthodox Jews — a phenomenon that could become more visible with the approach of primaries in states that have large Orthodox populations.

Romney, the front-runner in the Republican primary race, has raised millions from prominent Republican Jews. Though Santorum has fewer Jewish ties, he has Orthodox fans and is planning to appeal to them in New York and in his home state of Pennsylvania.

Orthodox commentators and lobbyists say that Santorum’s focus on social issues is popular in their community and that his values and his personal life resemble their own.

“There’s no doubt that Mr. Santorum’s religious background and conservative religious stances on things like abortion and same-sex marriage resonate well with much of the Orthodox community,” Avi Shafran, director of public affairs for the ultra-Orthodox advocacy group Agudath Israel of America, wrote in an email to the Forward. Santorum’s large family and his disabled daughter, Shafran continued, are “something that endears him as a person to many an Orthodox heart.”

Barbara Ledeen worked for Santorum when he was a senator, serving as a director of coalitions for the Senate Republican Conference. She currently is an unofficial adviser to the Santorum campaign. Ledeen said that the candidate plans to visit Orthodox communities in New York, Pennsylvania and elsewhere when the primaries arrive in those states in late spring.

It’s not clear whether Orthodox Jews could play a deciding role in a presidential race. Of the 6 million Jews in the United States, only 10% are thought to be Orthodox.

After trailing the rest of the Republican field for months, Santorum emerged in March as the most viable alternative to Romney. Santorum, a conservative Catholic, has been vocal about his faith and has built a reputation on his staunch opposition to same-sex marriage and abortion, among other issues.

Though Santorum sponsored Israel-related legislation as a senator that made him popular with Israel advocates, Romney has enjoyed the support of most prominent Jewish Republican donors. Those donors, many of them wealthy secular businessmen, are generally moderate on social issues. In a year when Republicans hope to win a greater proportion of the Jewish vote, Romney’s past as a pro-choice governor and his emphasis on the economy are thought to be a potential attraction for Jewish voters in the general election.

But Santorum’s appeal to the conservative Republican base may have hit home with the Orthodox.

“We haven’t done any polling on that, but what I can say is that Santorum should have very good appeal in the Orthodox community,” said Nathan Diament, director of the Institute for Public Affairs, the advocacy arm of the Orthodox Union. “He’s got a record of being responsive to Orthodox community concerns.”

While serving as a senator representing Pennsylvania, Santorum was a sponsor of the Workplace Religious Freedom Act of 2007, a failed legislative effort supported by both Diament’s group and Shafran’s group that would have compelled employers to make allowances for the religious practices of their employees.

Diament also said that Santorum had supported another failed effort backed by the O.U. to create a federal corporate tax credit for contributions to school scholarship funds, similar to a state program in Pennsylvania that Diament said had been successful in raising money for Jewish religious schools.

Santorum’s objection to same-sex marriage, an issue that nearly came to define him during his days in Congress, could be particularly helpful among the Orthodox, who broadly oppose recent legislative moves toward the acceptance of homosexuality. “Within the Orthodox community, the issue of gay marriage is a very big one,” said Yochonon Donn, an editor at Hamodia, a daily Brooklyn-based newspaper serving the Jewish community. Donn said that he is a Santorum supporter in his personal capacity.

“His opposition to same-sex marriage exactly mirrors the Orthodox communities in that they consider marriage between a man and a woman only,” Ledeen said.

Santorum’s Orthodox appeal, however, appears to go beyond policy issues. Like many Orthodox families, Santorum has an above-average number of children — seven, including a young daughter who is severely disabled.

“Things that might scare other people don’t scare us,” Donn said, referring to Santorum’s openness about his faith. “That’s why I think his message resonates.”

Orthodox sources praised efforts Santorum made as a senator to reach out to Orthodox Jews. During the 2004 Republican National Convention in New York City, Santorum and Senator Norm Coleman, a Jewish Republican, visited the ultra-Orthodox Brooklyn neighborhood of Boro Park to meet with local luminaries, one of whom was Yaakov Perlow, known as the Novominsker rebbe, the rabbinic leader of Agudath Israel. The group also visited Ohel Children’s Home and Family Services, an Orthodox social service group.

Opposition to Santorum among secular and liberal voters could bolster his support among the Orthodox, according to Shafran. “I suspect that the fact of his being mocked, even derided, for his principles is something else that many Orthodox Jews well relate to, which further makes him an object of their admiration,” he wrote in an email.

Though some ultra-Orthodox communities put limits on their members’ use of the Internet, there is some online organizing that is attempting to bolster Orthodox support for Santorum, including a website called Jews Pick Rick.

“The sole goal of Jews Pick Rick is to turn the Orthodox community into Santorum territory, spreading Rick’s conservative message to [the Orthodox New York and New Jersey communities of] Boro Park, Flatbush, Monsey, Lakewood and Five Towns,” a press release on the group’s website states.

The group did not respond to requests for comment.