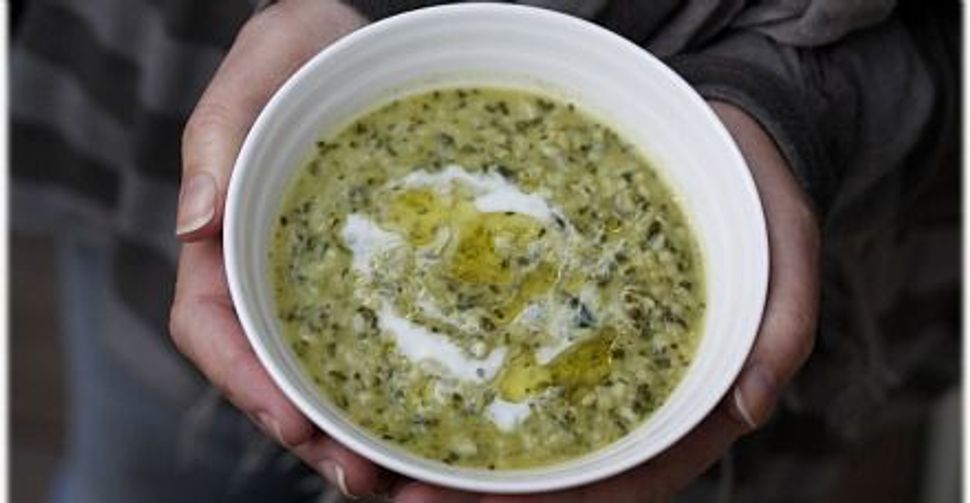 When the bohemian Tel Aviv restaurant Joz and Loz opened eight years ago, it began serving an appetizer called Palestinian kubenia. The menu described it as a traditional dish consisting of bulgur and sirloin tartare, mixed with fresh mint leaves, preserved lemon and chilies. The dish quietly lived on the menu, not making waves. 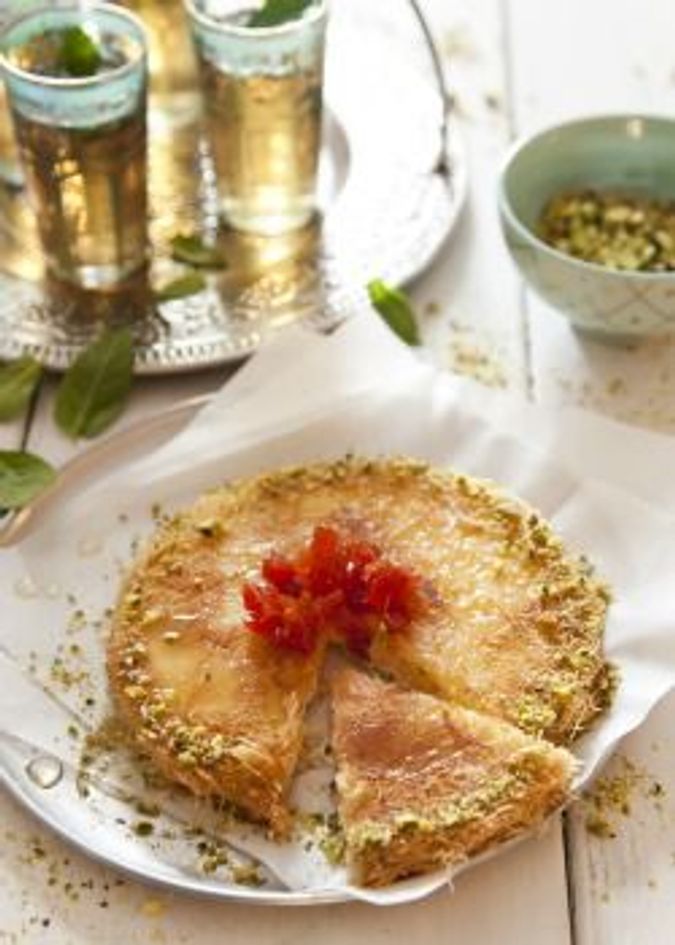 Arab Home Cooking: Knafeh, a Palestinian dessert stuffed with warm goat cheese, is one of the most popular dishes at Haim Cohen?s new Jaffa/Tel Aviv restaurant. Image by salissyudio

Fast-forward a few years, and the idea behind the dish and its name has caught on. Several of Tel Aviv’s trendiest menus are now speckled with dish titles such as Palestinian tartare and Arabic ravioli. The chefs behind these dishes aren’t simply returning some hallmark dishes to their original owners, the Palestinians; they are going as far as affirmative action by branding Palestinian dishes as upscale gourmet.

It’s not uncommon for Israelis of all backgrounds to travel periodically to the margins of cities to eat at “Arabic restaurants,” as they’re called, to get their fix of hummus, shipudim (grilled meats on a skewer) and salatim (mezze-style spreads of large variety). As a rule, these restaurants are casual and inexpensive. Guests are greeted by friendly staff, who immediately serve them a bounty of salatim, fresh pita bread and sweet lemonade. For the most part, these restaurants don’t serve festive dishes, nor do they stress local and Palestinian ingredients and herbs such as friki (roasted green wheat), akoub (tumble thistle) and hubeza (mallow plant).

In the past few years, chefs and diners in Tel Aviv have shown an increasing interest in Palestinian culinary traditions. At The Basta, a fabulous restaurant near the Carmel Market, you can find a tribute to the Galilean dish shush barak — Arab ravioli. The dough is stuffed with a soft young goat mixture, served in yogurt sauce and topped with grated laban kish (hard dry yogurt). “We named it this way because of our strong feeling of belonging,” said Maoz Alonim of The Basta. “There is tremendous Palestinian influence in our kitchen. We deeply understand where the local ingredients come from and the environment we live and work in. This food evolved from a tradition, which is thousands of years old. It’s important to show respect to the culture this food came from. I don’t separate my political views from my cooking.”

Chef Meir Adoni of Mizlala and Catit restaurants, who serves a dish called Palestinian tartare, said he included the word Palestinian in the name of his dish because it is assembled with ingredients identified with the Palestinian kitchen: lamb, tehina, za’atar, grated tomato, burnt eggplant, parsley and pine nuts. “There are some people who like this title and some who don’t,” he said. “Those who are against it don’t understand why I should compliment the Palestinian culture, but in the end I do what I love and believe in. Overall, it’s a very popular dish.” Adoni’s food is also influenced by his background in catering, working with Palestinian cooks in the city of Modi’in. “They introduced me to their mothers’ foods,” he said, “techniques and ingredients like laban kish, fava beans and za’atar, that today we take for granted in the Israeli cuisine.”

When it comes to the final bite at these restaurants, you’ll find Palestinian inspiration as well. Knafeh (dessert made of kadaif dough and stuffed with warm goat cheese), malabi (rose-flavored milk custard) and sachlab (a hot, sweet and fragrant thick drink, topped with coconut shavings) make regular appearances on some of the city’s most exiting menus. At Jaffa/Tel Aviv, the new restaurant by chef Haim Cohen, the godfather of Israeli cuisine, knafeh is one of the most popular dishes on the menu.

Last year, Haj Kahil, an upscale Arabic restaurant owned by Muslims, opened in Jaffa. It has been packed ever since with trendy Israeli clientele. Gourmet takes on Palestinian food, which once required a special trip to the famous Diana or al Babour restaurant in the Galilee, dominate the menu. Chef Omar Iluwan serves seasonal fare and festive Arabic dishes such as machmar (roasted chicken in sumac) and stuffed lamb neck, together with more modern and seasonal dishes like sabra Caprese (mozzarella and cactus fruit salad).

Interest in Palestinian food isn’t limited to professional kitchens. Amateur Israeli cooks are making Palestinian dishes in their homes, using ingredients that are identified with Palestinian food, like green almonds and hubeza. A recipe for a hubeza and yogurt soup appeared recently on a popular cooking blog called Bisim (bites). These ingredients have been around for thousands of years, but somehow remained in the shadow of Israeli cooking.

The acceptance and celebration of Palestinian food in current Israeli cuisine marks the peak of a long and gradual process, just as the identity of Israeli cuisine has started to reveal itself. When we think about what current Israeli cuisine is, a mix comes to mind: Jewish ethnic foods, excellent produce, young chefs with high culinary education and strong Arabic influences. Arguably, as the Israeli scene has become more established, it is able to credit its sources of inspiration.

Another explanation for the rising popularity of this food is strictly political. This trend is limited to the city of Tel Aviv and its surroundings. “In Tel Aviv it’s considered ‘cool’ to be pro-Palestinian,” said Gil Hovav, a leading culinary journalist and television personality. “The culture encourages it.” In the past few years, Tel Aviv has shifted further left on the political map, positioning itself as the liberal refuge and natural habitat for Israel’s young creative community. Raising the banner of pluralism, the residents of Tel Aviv express their discontent with the government agenda not only with social activism, but also in their food culture.

The “State of Tel Aviv, ” as many call it, doesn’t have the authority to decide on land and borders, but it is certainly suggesting peace on its dinner plates.