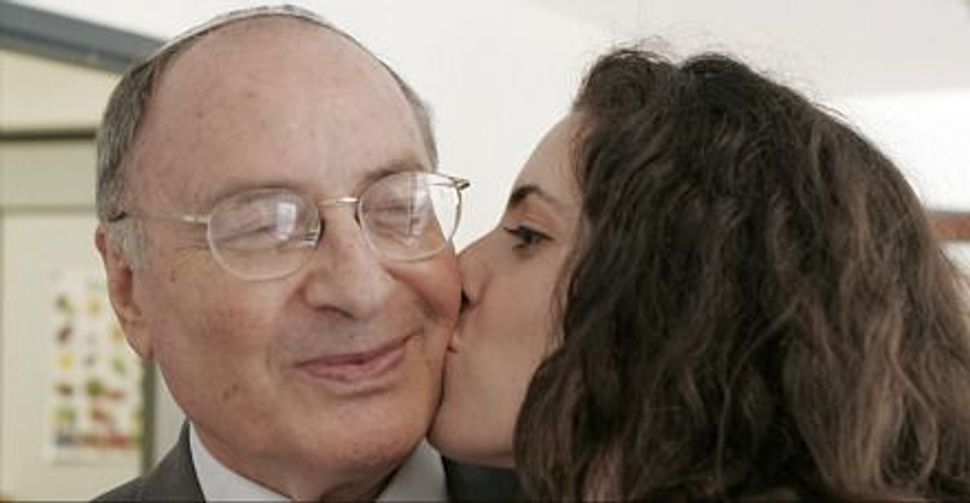 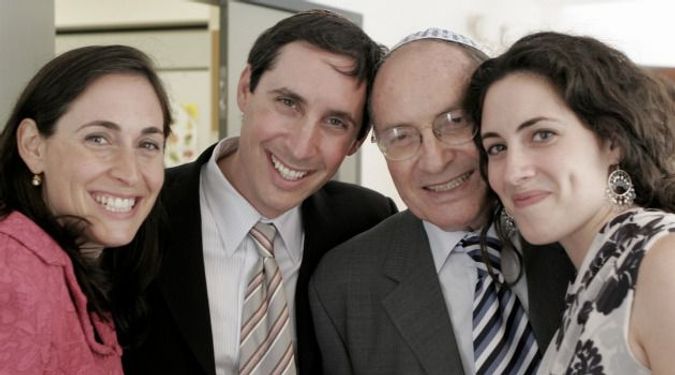 Father Knows Less? Rachel Brook was raised Jewish by her father. She was taken aback when a school asked her to undergo a conversion because her mother is not Jewish. Image by courtesy of rachel brook

Rachel Brook, a 29-year-old vocalist living in Brooklyn, was born to a Jewish Israeli father and a non-Jewish mother. After her parents divorced when she was 3, Brook was raised by her father as a Jew in a Reform synagogue. Last year, she decided to apply to cantorial school at the Academy for Jewish Religion, but because AJR doesn’t accept students with only a Jewish father, Brook was told she would have to convert.

“It was hard for me to accept on many levels,” she said. “I felt I lived a recognizably Jewish life. I’m part Israeli. Never would it have occurred to me that others might not view me as legitimate.”

The administrators at AJR, a non-denominational school in the Bronx, told Brook that it was nothing personal. In order for its graduates to be accepted at Orthodox and Conservative institutions, AJR had to follow the traditional standard of Jewish law, which maintains that Judaism is passed down through the mother. AJR allowed Brook to go before an all-female beit din, or Jewish court, for her conversion ceremony. While converting ultimately felt meaningful, Brook bristled at the idea of others like her being asked to undergo a similar process. “It’s not worth losing Jews over,” she said.

Accepted by the Reform and Reconstructionist movements, patrilineal Jews like Brook find themselves in limbo when they venture beyond their denominational walls. Nearly three decades after the Reform movement’s landmark 1983 decision to accept patrilineal Jews, the standard has yet to catch on with Conservative or Orthodox Jewry.

Now, as the first children born since the decision are beginning to have families of their own, patrilineal descent remains one of the most controversial decrees in American Jewish history. As Jews today gravitate away from movement-based worship and toward pluralistic venues, the resolution appears to be taking on new urgency. In communal settings like Taglit-Birthright Israel, JDate and Hillel, patrilineal Jews find themselves intermingling with people who question their Jewishness. “Dissent over descent” has reached a fever pitch.

Depending on whom you ask, the Reform movement’s acceptance of patrilineal Jews — predated by 15 years by the Reconstructionist movement — was either a boon to American Judaism or a harbinger of its demise. Officials in the Reform movement, now the largest denomination in America, say that their decision opened the door for mixed marrieds who were intent on raising their children as Jews. But critics from the Orthodox and Conservative movements, and even from within Reform Judaism itself, say that patrilineal acceptance has diluted the Jewish community beyond recognition, giving rise to a generation of half-Jews with tenuous religious ties.

Furthermore, they contend that patrilineal acceptance drove a wedge through the heart of the Jewish community, creating competing definitions of what it means to be a Jew. Whereas at one time, Orthodox parents might have allowed their child to marry a Reform Jew, the patrilineal decision caused traditional Jews, wary of Reform bloodlines, to question that acceptance.

“Jewish movements’ attempts to tamper with the definition of Jewish status obviously carried the seeds of terrible disunity for Jews as a people,” wrote Avi Shafran, spokesman for the ultra-Orthodox advocacy group Agudath Israel of America, in an email to the Forward. “This is why the first embrace of ‘patrilineality’ was strongly condemned by Jews who valued Jewish unity — that is to say, the maintenance of a single entity called ‘the Jewish people.’”

Reflecting on nearly 30 years of patrilineal descent, Reform leaders say that individual cases like Brook’s were the rationale for shifting the definition of Jewish identity, one based on blood lineage, to one based on Jewish commitment. “We had to get rid of a dissing approach that was inherent in Judaism,” said Rabbi Daniel Freelander, senior vice president of the Union for Reform Judaism. “We had a lot of individuals who feel good about their Jewishness, and who even had agreements with their partners to have a Jewish lifestyle, and there was no mechanism in Judaism to deal with those families.”

According to Leonard Saxe, a Jewish demographer at Brandeis University, the patrilineal descent decision succeeded in opening the doors to Jews of mixed lineage. “We moved from a situation where a person who married a non-Jew was seen as rejecting their religion and their heritage to a situation where everyone recognizes that marrying someone who is not Jewish — as much as we would like that non-Jewish person to convert — is not necessarily a rejection of Jewish identity.”

Yet statistically speaking, cases like Brook’s are uncommon. According to Steven M. Cohen, director of the Berman Jewish Policy Archive at New York University’s Robert F. Wagner Graduate School, inmarried parents are more likely to raise their children as Jews than their intermarried counterparts by almost any standard imaginable, from keeping a kosher home to attending a Passover Seder. Cohen’s 2006 study, called “A Tale of Two Jewries,” details the “gap” between the Jewish lives of intermarrieds and inmarrieds, concluding that “intermarriage does indeed constitute the greatest single threat to Jewish continuity today….” According to the report, 76% of the children of intermarrieds go on to intermarry, raising their own children as Jews just 7% of the time.

When it comes to Jewish continuity, intermarried couples in which the wife is Jewish fare far better than intermarried couples in which the husband is Jewish. According to the National Jewish Population Survey of 2000–2001, Jewish women who marry non-Jewish men are more than twice as likely (47%) to raise their children as Jews than Jewish men who marry out of the faith (28%).

For critics of patrilineal descent within the Reform movement and beyond, these figures confirm their worst fears: that it has done nothing to buoy Jewish engagement while muddying the waters on who is and who is not a Jew.

“Most kids of mixed marriages are not embracing Jewish identity,” said Rabbi Clifford Librach, who helms a Reform synagogue in Danbury, Conn. “We don’t see most of them to start with, and those that we do see, the majority of them are simply not attaching.” For Librach, the promise of retaining half-Jewish families that otherwise might have been excluded has fallen flat. “The effect has been a continuing revolving door,” he said. “This has not generated an expansion of those who are committed to the long-term continuity of the Jewish people.”

The patrilineal descent decision may not have brought intermarrieds into the fold en masse, but it didn’t encourage intermarriage, either, as many of its early critics had warned would result. According to Cohen, the Reform movement’s 1983 resolution had a negligible impact on the intermarriage rate, which had been rising steadily since the 1960s and then tapered off at around 47% in the early 2000s. “I believe it had a small impact upon group boundaries and the boundaries were melting and weakening anyway,” he said. “The whole world of American religion has moved to nonexclusive identities, toward hybridity.”

In Cohen’s opinion, Reform Judaism’s decision to accept patrilineals makes sense as a way to accommodate the children of intermarrieds. But he also applauds the Conservative and Orthodox movements’ refusal to admit patrilineals without conversion. The approaches work together to send a potent mixed message to American Jewry — warning individuals against marrying outside the faith, but reassuring them that they’ll be accepted in some circles if they do.

Even so, the varying definitions of what makes a Jew a Jew have riled the Jewish community at large. Patrilineals from the Reform and Reconstructionist movements say they feel excluded when they bump up against more traditional notions of Jewish heritage. On a Birthright trip last December, for instance, Dartmouth University sophomore Patton Lowenstein, whose mother is a non-Jew, was chagrined when a rabbi at the Western Wall refused to wrap tefillin with him.

“I can’t say I wasn’t disappointed a little bit,” he said. “But having not really been raised Jewish and having been able to go on this trip for free by having some Jewish grandparents, I couldn’t complain.”

Conservative and Orthodox Jews, for their part, take umbrage with the notion that they are somehow being close-minded when they’re upholding 2,000 years of Jewish standards, even as the Conservative movement has moved toward the Reform stance on topics like women at the pulpit and gay and lesbian rights.

“It put us in a situation because we care about matrilineality that we are obliged to ask painful questions and be pressed into painful situations when people who think of themselves as Jews and have been living as Jews may still have to go to a mikveh and be converted,” said Rabbi Gerald Skolnik, incoming president of the Conservative movement’s Rabbinical Assembly. “It is not a situation that we relish, especially as we are trying very hard to reach out to people.”

Skolnik, for his part, is resigned to the fact that the competing definitions of Jewish status will lead to hurt feelings. He said that difficult interactions should be handled as sensitively as possible. Other rabbis are seeking solutions to the conundrum.

Levin recently suggested a plan for mass immersion at pluralistic Jewish summer camps and day schools, asking Jewish children of all parentage to take a dip in a stream or in the ocean — an improvised mikveh — in order to recommit en masse to Judaism. This way, the differences between patrilineal Jews and halachic Jews will be ironed out without anyone knowing who is who.

Levin presented his idea at a March conference on the status of patrilineal descent, held at AJR, which is currently reconsidering its policy of accepting only matrilineal Jews.

“Yes, lineage matters,” Levin said at the conference, to mass applause, “but so does practice. Let us all go into the mikveh and not quibble about whom the water cleanses.”

Brook was in attendance. When asked about her response to Levin’s plan, she said she wasn’t sure about the value of mass immersion, in particular because it seemed so impersonal in comparison with her own conversion. Brook said that she was unsure how to resolve the differing attitudes about who is a Jew.

“I don’t know what the answer is,” she said. “If we can begin a conversation about it, I think we are on a good path.”