Details of the Frightful Tragedy 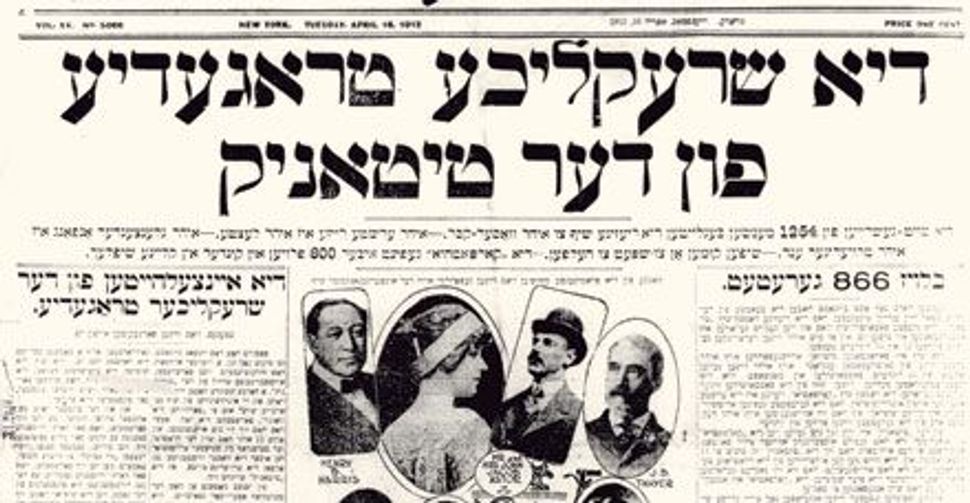 This article was published in the Yiddish-language Forward on April 16, 1912.

Sunday at 10:40 p.m., a large iceberg tore through the starboard hull of the Titanic. For half an hour the crew and engineers of the ship labored intensively to “heal the wound,” and plug the hole, but it wasn’t possible. And at around 11 p.m., a wireless telegraph sent the sad news from the steamer out across the vast waters of the ocean that the Titanic was sinking.

From that moment on, the telegraph operator worked ceaselessly. As a loyal soldier at his post, the operator stood by the wireless telegraph calling for help. The desperate call was heard by numerous steamers sailing hundreds of miles from the site where the Titanic struggled with the ocean. For less than one half hour, the operator sent word of the perilous situation incessantly. The last telegram from the Titanic was received at 27 minutes past 12. The message was unclear, but it was evident that the Titanic was barely holding on and was sinking. The steamers received no additional news from the Titanic. Only the waves and the lifeboats carrying the few hundred women and children who had been rescued in time off of the wounded steamer — only they, perhaps, heard the last desperate wheeze, the last whistle signal that the Titanic released.

It was precisely 36 minutes after 11 when the steamer Olympic received the Titanic’s telegram that women and children were being loaded into lifeboats. Within 51 minutes prior to the Titanic’s sinking, the lifeboats were lowered, and in those 51 minutes the lifeboats were able to get far enough away from the steamer so that as she sank, they weren’t pulled under along with her.

It’s probable, but we don’t know for certain why the lifeboats were able to float far enough away on an ocean thick with ice. Those conditions disrupted many ships from searching for the wounded steamer. It’s likely that many of those lifeboats perished along with their mother ship.

It must have been a hideous, terrifying scene lowering the women and children in the lifeboats and watching them circling round and round on an endless watery wasteland. It all took place in darkness. From time to time, the Titanic released flares and for a moment, the ocean, the ship and the terrified people were lit. And soon enough it was dark again, darker than before. And in the darkness, lifeboats full of women and children were lowered onto the water. One can imagine the bitter scenes of leave-taking as women and daughters said a last “farewell” to their husbands and fathers. One can picture the distressing screams slicing through the night’s darkness as, one after another, the lifeboats departed from the wounded colossus.

We don’t know as yet how many lifeboats were lowered or how many were available on the Titanic. However, it’s generally accepted that she wouldn’t have had more than the number necessary to rescue slightly more than half of the passengers and half of the crew. There were supposedly enough lifeboats for a rescue of approximately 1,800 individuals. It’s likely there were also enough life preservers for everyone. It’s doubtful, however, that they could all have been rescued unless the Carpathia would have been able to get there as soon as the lifeboats were lowered and the men threw the life preservers on and jumped into the ocean. But it took several hours before the Carpathia got there.

What the Carpathia witnessed at the site of the catastrophe will only be made available Thursday evening, when the steamer arrives in New York. We can already imagine, however, that she found a few lifeboats floating on an ocean full of ice floes. And coming from those lifeboats, it’s likely, she heard desperate cries echoing across the vast expanse of sea. She probably found shards of wood and other pieces of the sunken Titanic.

In the four to five hours until the arrival of the Carpathia, the women and children sitting in those lifeboats were probably desperately seeking any sign of rescue. It’s easy to imagine what long hours they endured.

It’s likely there will never be a satisfying description of the accident nor enough facts to explain the sinking of the Titanic. That information lies secreted below, having sunk into the depths, along with the ship’s captain, its crew and the tragic Titanic.

Details of the Frightful Tragedy