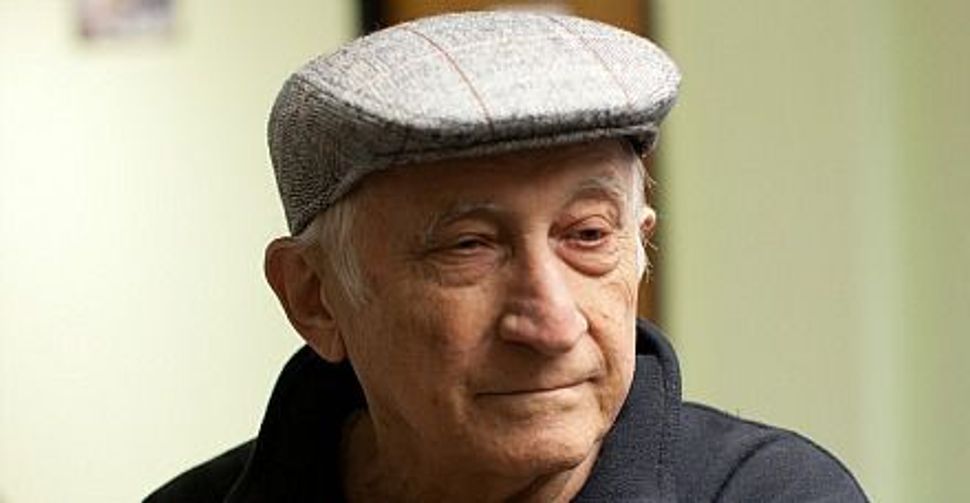 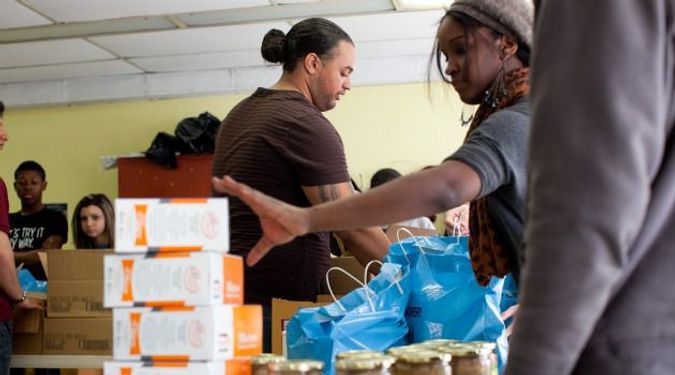 Poverty Amid Plenty: Volunteers pack up food packages at a popup Passover food pantry in Brooklyn. Surprising numbers of Jews are seeking help, even those who once considered themselves middle-class. Image by claudio papapietro

Rebecca speaks four languages and has four degrees. She also has four children, no job and a house that is about to slip into foreclosure.

“I could be on the street soon, with four kids,” said Rebecca, a 44-year-old divorcée, as she loaded two bags of Passover food into a friend’s car outside a pop-up food pantry in the Sheepshead Bay section of Brooklyn.

Rebecca, who asked that her surname not be used, was one of dozens of Jews who arrived at the food pantry on March 30, many pushing shopping carts on an unseasonably warm and sunny spring day. They headed over to a collection of big blue shopping bags filled with a dozen items, including matzo, pickles, gefilte fish, applesauce and mayonnaise. Each one was also given a 10-pound bag of potatoes.

Passover is traditionally a time when Jewish families gather with friends around large tables groaning with food and drink.

Poverty is a major, if often overlooked, problem facing the Jewish community. And Brooklyn is ground zero for Jewish poverty in New York.

Peter Brest, chief operating officer of the Met Council, said about 225,000 people in New York City’s Jewish households live at or below 150% of the federal poverty line. For a family of four, that means a household with an annual income below $27,150 in one of the most expensive cities in America.

An additional 85,000 people in New York scrape by just enough to live slightly above that level. Even outside the city limits, there are pockets of Jewish poverty, with 36,500 Jews living in or near poverty in the suburbs surrounding New York.

Roughly one-third of all Jews who are poor live in Brooklyn, according to the most recent Report on Jewish Poverty, which was published in 2004 by UJA-Federation of New York and the Met Council. A new report is expected in the coming year.

According to the study, 84% of New York City’s Jewish poor are either members of large Orthodox families, Russian speakers or elderly Americans.

Poverty also affects many people who, until recently, considered themselves solidly middle class. Just a few years ago, Rebecca, who was born in Kiev, Ukraine, earned $85,000 per year as an information technology specialist for New York City Transit.

She said the company laid her off in September 2010, six months short of 10 years of service.

Now she cannot find a job. Her $400-a-week unemployment benefit is due to end at the end of April. And if her home in the upper middle-class Mill Basin section of Brooklyn goes into foreclosure, she doubts she will be able to find a landlord willing to accept her as a tenant.

“Nobody will take a single mother with four kids who is not working,” Rebecca said as her 5-year-old son, Alan, stared out through the backseat window of the car.

Inside the food pantry, Laura Mezhiborsky said Rebecca’s story was sad but not uncommon. “She’s not alone in this situation,” she said.

“The recession pushed a lot of people down into poverty,” Brest said. “They’re really struggling to make ends meet on a daily basis.”

Mezhiborsky, executive assistant of the Jewish Community Council of Kings Bay, said that when she took over the running of the food pantry six years ago, she had 70 clients. Today she has 400.

“Unfortunately we have more demand than we can provide,” Mezhiborsky said, adding that she has somewhere between 80 and 100 people on a waiting list.

The Passover food pantry, held at an annex of the Kings Bay Y Jewish community center, in Sheepshead Bay, is stocked by the Met Council and by the Food Bank for New York City.

Many of the mostly elderly people lining up for a handout did not want their names to be revealed.

“I am ashamed and humiliated that I even have to accept help,” said one American Jewish woman, 64, who telephoned later to ask that her name be withheld.

“Food stamps don’t last the whole month,” she said. “This is my last week, and they’re not due again until the seventh [of April], which means the holiday would have begun and I wouldn’t have been able to get this food, because I am out of my stamps.”

Mezhiborsky said a growing number of people needed her help, thanks largely to an aging Russian-speaking immigrant population and an increase in food prices.

Particularly hard hit have been those people whose income from Social Security places them slightly above the level that would make them eligible for other benefits, such as Medicaid and food stamps.

The lucky ones, like Galina Bogdanova, receive supplemental Social Security income — she gets $785 per month — plus $200 worth of food stamps.

Still, by the end of the month, even those with benefits will find themselves having to choose whether to pay for medication, rent or food — which is what brought Bogdanova, 75, to the food pantry.

Speaking Russian, she said that prices had risen and she feels the pinch. Still, she manages to get by.

“As long as I have my strength,” she said, before pushing her shopping cart out into the spring sunshine.