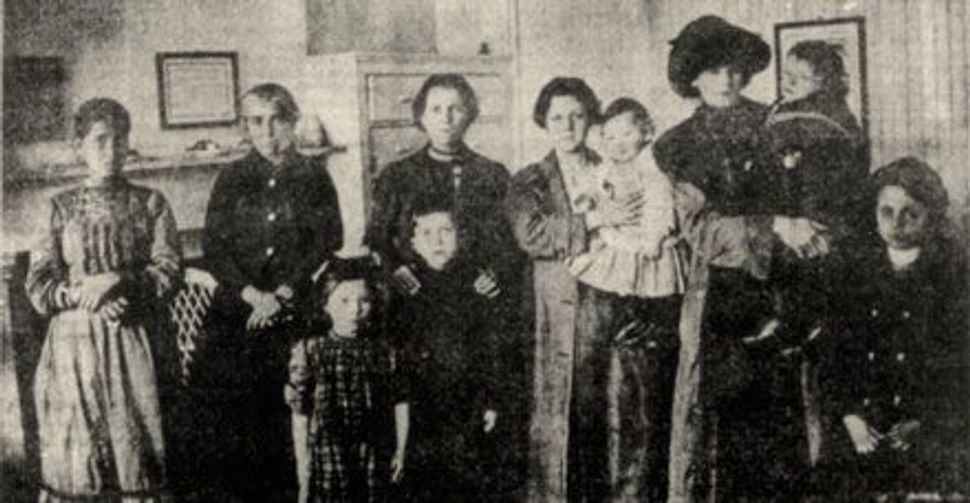 On Friday, April 19, 1912, 10 Jewish survivors of the ill-fated luxury liner RMS Titanic posed for a Forverts photographer in the offices of the Hospitality Society on East Broadway. The sad group included only a few of the 705 survivors who had been rescued by the steamship RMS Carpathia and who had arrived in New York City the previous day. Standing near the center was 27-year-old Beile Moor, whose hands rested protectively on the shoulders of her 7-year-old son, Meier. Along with their frightful memories of the sinking of the gigantic ship, the mother and son carried with them the mystery of how they had been saved.

That mystery has been passed down through the generations, told over and over again, until it has become as much a part of the family’s history as the fact that Moor and her son were on board that palatial ship on the night it sank into the sea. The mystery is this: Who was the wealthy woman who gave up her place in the lifeboat, making room for them?

Only a few sparse facts are available from the family’s early history. Meier Moor (later known as Meyer Moore) was born somewhere in the Russian Empire on November 7, 1904. His father, whose name is now unknown to the family, had died or would soon die in the Russo-Japanese war. According to family lore, pogroms forced Beile and her son to make a hasty and dangerous journey to England, where she found work as a seamstress. The mother and son lived with family members already established there. In time, she determined to immigrate to the United States to join family members in Chicago. Her first attempt ended in failure, although the reason is unknown. What is known is that in early April of 1912, Moor purchased tickets to make a second try. Originally, she and her son were supposed to travel on the ocean liner the RMS Adriatic, but because of a local labor dispute, they took the Titanic instead.

The switch must have been exciting for them. The Titanic was the most talked about technological marvel of the day, and they would become part of history by traveling on the great ship’s maiden voyage. When the ship set sail from Southampton, England, the mother and son were occupying steerage cabin E -121, located deep in the stern of the ship. The young boy used the days at sea to collect from other passengers the colorful, decorative playing cards included in some cigarette packages of the day. By the evening of April 14, he had amassed a sizable collection. Family lore tells us that for some reason, Beile Moor may have been on one of the Titanic’s upper decks when the ship fatally struck the iceberg, tearing a 300-foot-long gash in the starboard side of the ship.

What happened next would be recounted by her son a number of times during the last few years of his life. Wearing life vests, he and his mother were somehow able to fight the crowds and climb the six flights of stairs leading to the Titanic’s lifeboat deck. The only thing Beile Moor brought with her was her purse, which held the documents they would need for entry into the new world. Neither of them would recall exactly how they got into a lifeboat amid the panic, but both remembered that a space for them opened up when a woman of means gave up her spot. Meyer recalled years later that from the bobbing lifeboat, he watched the Titanic sink, taking with it all those lives and his precious playing cards.

According to the family, continuing immigration difficulties kept the pair from Chicago for another two years, but once there, Beile Moor, who began going by the name “Bella,” opened a dry goods store, married again and thrived. Meyer Moore, too, did well, marrying in 1937 and eventually settling in El Paso, Texas, where he worked as a jobber, selling shoes and dry goods. Moore had three sons and four grandchildren; he passed away in El Paso on April 15, 1975, the 63rd anniversary of the sinking of the Titanic.

In 2005, Joan Adler, an archivist who serves as executive director of the Straus Historical Society, contacted Meyer Moore’s son Carl about an article she was researching for the Straus family newsletter. During the course of their discussions, Carl Moore became convinced that the wealthy woman who had given up her seat in the lifeboat was Ida Straus, the wife of R.H. Macy & Co. owner Isidor Straus. Ida Straus famously decided to stay by her husband’s side, declaring, “We have been living together for many years. Where you go, I go.” Isidor, too, refused to enter a lifeboat while other men remained on board, and both perished when the Titanic sank.

Carl Moore’s ex-wife, Linda Moore, who is vice president for academic affairs at Emerson College in Boston, also believes in the Moor-Straus connection. A number of years ago, at a meeting of the International Council of Fine Arts Deans in Pittsburgh, Linda Moore had a chance to speak with John Wendell Straus, a grandson of Ida and Isidor Straus’s. She told him that if it had not been for his grandmother’s sacrifice, her children might not have been born. She said John Straus asked a question that moved her deeply: “Are they good people?”

She had reason to answer yes. Her son, Christopher Moore, is an associate professor of neuroscience at the Massachusetts Institute of Technology, and her daughter, Lee Moore, is a newly ordained rabbi and senior Jewish educator for Hillel at Kent State University in Ohio.

The connection between the Moores and the Strauses is a touching tale but, sadly, one that is likely not true. Multiple eyewitness accounts by survivors, along with inquest testimony and the records from the Carpathia, make it very unlikely that Beile Moor and Ida Straus crossed paths during that critical hour in their lives.

Beile Moor and her son reached the safety of the Carpathia via the Titanic’s lifeboat No. 14, which was located near the rear of the ship on her port side. That lifeboat was lowered at about 1:30 a.m.

According to many eyewitnesses, the drama of the Strauses’ last hour played out near lifeboat No. 8 and other lifeboats near it. Those crafts were situated near the front of the ship on her port side. It was there that Ida Straus first refused to leave her husband’s side.

Eyewitnesses said that the Strauses were still on board the doomed vessel, standing near that same area of the boat deck, when some of the last lifeboats were being lowered at about 1:45 a.m. It was one of those boats that Isidor Straus desperately attempted to persuade his wife to enter, and it was in that location of the ship that the two were last seen.

(Ida Straus was not the only first-class female passenger to die after forgoing the safety of a lifeboat. Another woman, Bessie Waldo Allison, abruptly gave up her spot when she learned that her husband and son were boarding a boat on the Titanic’s starboard side. Allison, the wife of a wealthy Montreal stockbroker, may have been in a rear, port-side lifeboat when this took place.)

Speaking by phone from her office in Boston, Linda Moore said that the new revelation is disappointing but does not change, in the least, her opinion or feelings about Bella Moor. “She was an incredibly strong woman,” Moore said, “whose courage and ingenuity a century ago in saving herself and her son made possible the two wonderful, productive and successful children [I have] today.”

Moore said that she and her daughter — who recently made “Bella” her Hebrew name — remain committed to knowing and preserving the true story of Bella Moore, a remarkable Jewish woman from Russia who survived war, persecution and history’s most notorious maritime disaster to make a new and better life for herself, her son and all who came after them. Of this, there is no doubt at all.