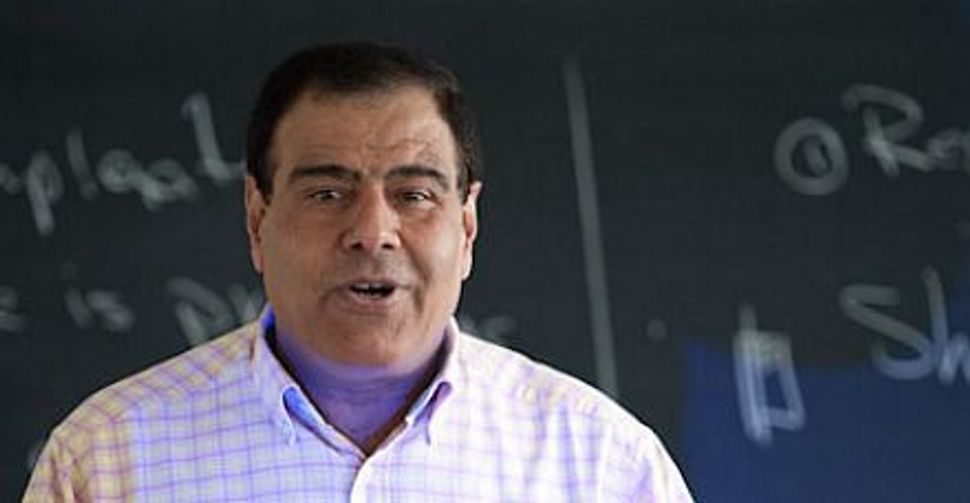 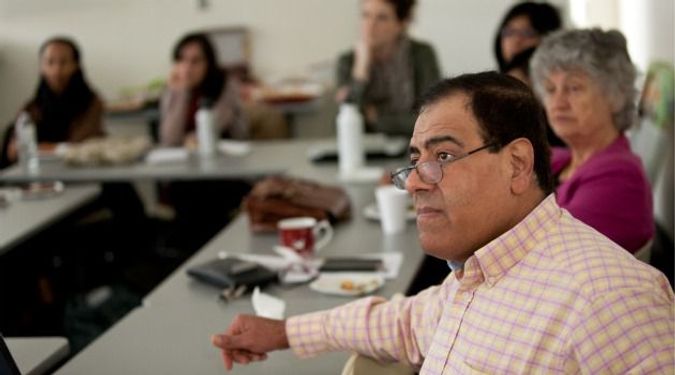 Starting Over: ?Gaza Doctor? Izzeldin Abuelaish lost three daughters to Israeli shelling. Now he is building a new life in Toronto, where he teaches public health. Image by nick kozak

The photo leaning on Dr. Izzeldin Abuelaish’s office window almost blocks the view of the Toronto skyline. It shows his three daughters, Mayar, Aya and Bessan Abuelaish, sitting on the beach in Gaza, writing their names in the sand.

Closer to his desk, pinned to the wall, is the recent fourth-grade math test of Abuelaish’s youngest son, Abdullah, taken at his school in Toronto. The grade: A+.

Between the memories of the three daughters he lost to an Israeli shelling of his home in Gaza during the 2008-2009 conflict and his commitment to the family’s five remaining children, Abuelaish is trying to rebuild his life far away from Gaza.

He says he seeks to make sense of the tragedy by devoting his life to promoting peace and nonviolence. Guiding the way is a quote by Mahatma Gandhi hanging on the wall in his small office at the University of Toronto’s Dalla Lana School of Public Health. The quote reads, “An eye for an eye makes the whole world blind.”

“I owe it to my daughters,” Abuelaish said in an interview with the Forward. “I believe that one day I will meet them and they’ll ask: ‘What did you do for us? Did you forget us, or did you continue giving hope, sending a humanitarian message?’”

His eyes tearing up, Abuelaish continued: “I want to tell them: ‘Rest in peace. I will do everything I can for your souls. I’ll try harder than before.’”

When Abuelaish vows to “try harder,” he means using his remarkable personal tragedy to advocate for a peaceful relationship between Israelis and Palestinians. His book, “I Shall Not Hate: A Doctor’s Journey on the Road to Peace and Human Dignity,” was published last year. Abuelaish is now active in raising funds for Daughters for Life, the foundation that he set up to help girls and women in the Middle East.

Abuelaish’s story came to symbolize the tragic reality of Palestinians and Israelis locked in a decades-long bloody conflict. On January 16, 2008, in the last days of the monthlong conflict in Gaza between Israel and Hamas, an Israeli shell hit the Abuelaish home. Bessan Abuelaish, 20, and her teenage sisters, Mayar, 15, and Aya, 13, were all killed on the spot.

The Israeli public learned of the horror in real time, as Abuelaish described the attack to an Israeli reporter on live TV.

As the reporter, Shlomi Eldar, held up his cell phone to the microphone, the crying voice of Abuelaish standing by the rubble of his Gaza home came in clear: “My daughters, oh my God, my daughters.”

The reporter in the studio tried to plead on air with the Israeli Defense Forces to allow ambulances to reach the house, but Abuelaish cried: “I want to save them, but they are dead. They are dead.”

Ehud Olmert, Israel’s prime minister at the time, later said that he came to tears when he saw the broadcast.

In May 2009, Abuelaish moved to Canada. He had been invited for a medical residency at the University of Toronto before the war, and decided to move as planned with his remaining five children. Bustling multicultural Toronto offers a stark contrast to Gaza, where life is marked by hardship and violence, and opportunities are scarce.

“People can learn from the Canadians. Take an example of how all the fear and stereotypes disappear,” Abuelaish said. He then reached for a piece of paper and wrote the word “justice.” “This is how it is here,” he said. “There is a law, and no one is above the law.”

His older daughters are now in college, and the younger ones go to local schools. Moving back to Gaza does not seem to be in the cards anytime soon, especially since his wife had died shortly before the Gaza conflict. The children, he explains, have settled into their new home.

Still, Abuelaish insists he has not forgotten his homeland. “I’m a Palestinian and will continue to be Palestinian,” he declared.

The troubling news from the region always makes its way to the Abuelaish home quickly. The latest flare-up, which started in early March with an Israeli-targeted killing of an Islamic jihad operative and was answered by a barrage of rockets toward towns in southern Israel, brought back frightening memories. Abuelaish’s daughter phoned her cousins in Gaza, only to hear that the Israeli shells hit the building next door. Abuelaish once again reached for his pen and paper, sketching a map of the street to demonstrate how close the shells came to his family’s home.

“How long will this go on?” he asked. “Instead of having courage to carry out targeted killings, you should have the courage to do good, to reach out.”

The “Gaza Doctor,” as he is known around the world, does not put the blame solely on those ordering the rocket strikes or assassinations. Abuelaish believes that it is the people of the two nations that are responsible for making a better future, not the leaders of Hamas in Gaza, Fatah in the West Bank or Likud in Israel.

“Leadership is not the problem,” he said. “We created this leadership; we should take responsibility.”

And so, although Abuelaish’s office is adorned with pictures of him posing with world leaders, his work is directed at the grassroots. He marvels at letters and emails received from Israelis, Palestinians and others who either have read the book or heard his lectures.

One of them is from a young Israeli woman who wanted to contact him earlier, but was serving in the Israeli army and was not free to express her views. Now she embraces Abuelaish’s mission. “When you see someone like that, you see we can make a difference,” he said. “Every change begins with one person.”

Abuelaish believes that the lesson of the Arab Spring, the string of democratic-driven uprisings in Arab countries, is not to underestimate the power of the people. Even though authoritarian regimes held all the levers of power, they were unable to hold back a tide of change. “All the weapons didn’t help, because people had no fear,” he said.

In his new homeland, Abuelaish juggles his academic work with peace activism. He teaches courses such as “Health as an Engine for the Journey to Peace” and a class on women’s health in areas of conflict, and in between he travels the world to preach co-existence and peace. His phone rings, and on the line is a friend from Morocco. Abuelaish’s book is being published in Arabic, and he is planning a speaking tour in Arab countries, exposing a new audience to his ideas.

Optimism is Abuelaish’s driving power. A son of Palestinian refugees, he worked his way up to become a nationally recognized expert on women’s reproductive health. Abuelaish firmly believes in the power of an individual to make change. He draws another set of dots on the paper, this time to explain that nothing can be predicted in life and that no conflict can be sustained forever.

Encounters with Israeli authorities can frustrate even a person as optimistic as Abuelaish. Since the killing of his daughters, he has been seeking an apology from the Israeli military. He approached the Ministry of Defense directly and through Israeli members of the Knesset, and eventually, weeks before the statute of limitations kicked in, he filed a lawsuit seeking recognition of guilt and compensation, to be paid to the fund he established.

Legal proceedings turned out to be an even greater source of anguish. An Israeli court ruled that in order for it to hear the case, Abuelaish would be required to deposit a bond of 20,000 shekels for each daughter he lost. He is now appealing this ruling. A lawyer for the Defense Ministry asked the courts to reject Abuelaish’s lawsuit, saying that the killing of his three daughters was part of military activity in the context of war and should be seen as collateral damage.

“How can you talk about people as collateral damage?” Abuelaish asked. “It’s a shame.”