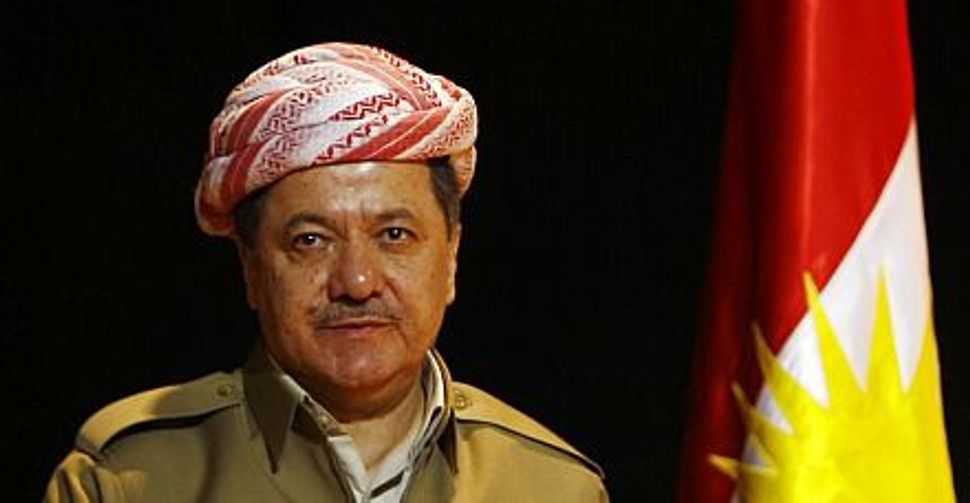 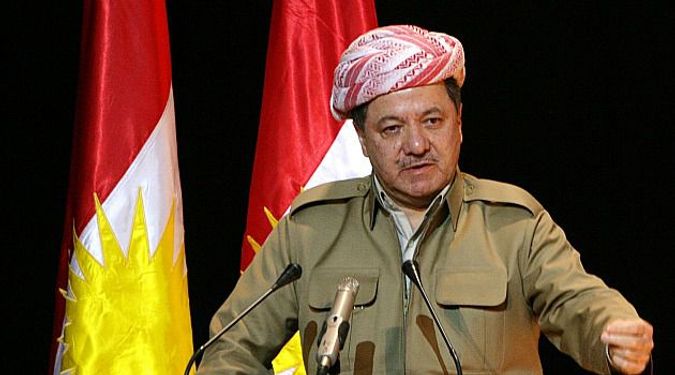 Hush-Hush Alliance: Iraqi Kurdish leader Marsoud Barzani has long been one of Israel?s only allies in the Middle East. Ties have been strained by Israel?s campaign to counter the growing nuclear threat posed by Iran. Image by getty images

A decades-long relationship between Israel and Iraq’s Kurds, maintained mainly in the shadows, faces new challenges as the two sides are split over the growing nuclear threat posed by Iran.

Masoud Barzani, president of Iraq’s semi-autonomous Kurdish Region Government, visited Washington recently. Notably, he did not meet with Jewish officials, nor did he touch on issues relating to Israel. Ties between the Iraqi Kurds and Israel have cooled as Israel pushes for support in its fight against Iran over the Islamic republic’s nuclear program.

Iraqi Kurds, on the other hand, hope to reduce tension with a powerful neighbor and want to avoid giving Tehran ammunition to use against them.

“I don’t think [the Kurds] want to irritate Iran too much,” said Robert Olson, a University of Kentucky professor who specializes in Kurdish affairs. “After all, they live next door.”

Judith Yaphe, senior fellow at the National Defense University’s Institute for Strategic Studies, said Israel and the Unites States should not count on help from the Kurds in case of a showdown with Iran. “There’s not much they can do,” she said.

The close relationship between Israel and the Kurds dates back to the 1950s, fueled mostly by their shared position facing several powerful enemies in the region.

The Kurds are an ancient Middle Eastern people numbering more than 25 million. They are scattered across the territory of several modern-day states, but have no independent state of their own. Iraqi Kurdistan has maintained de facto autonomy from Baghdad since the first Gulf War, when Western allies prevented Saddam Hussein from intervening in the region.

Due to its strategic location, Iraqi Kurdistan reportedly hosts undercover operations not only of Israel, but also of Iran.

David Pollock, visiting fellow at the Washington Institute for Near East Policy said that during a recent visit to the Kurdish region, he spoke to a prominent political figure who told him he estimates Iran has more than 700 safe houses in Sulaymaniyah province in the Kurdish region. “I asked him what they are used for, and he said, ‘If I knew, they wouldn’t be safe houses any longer,’” Pollock recounted.

The Iranians’ long-term interest is to keep Kurds in check, particularly since Tehran has its own Kurdish minority to worry about, Marvin Zonis, a professor of the University of Chicago’s Booth School of Business.

“Iran’s interest, as is Turkey’s, always was to prevent any demonstration that something positive can come out of Kurdish autonomy,” Zonis said.

During his recent visit, Barzani pointedly sought to steer clear of any appearance of taking sides in the dispute between the West and Iran. As a venue for the only public appearance during his visit, Barzani chose the Washington Institute for Near East Policy, a well-regarded Washington think tank known for its pro-Israel approach. In carefully crafted remarks, Barzani said his government would like to have normal relations with Iran, although it is committed to United Nations Security Council resolutions imposing sanctions on the country.

The Kurdish leader added, however, that “no outside entity should be allowed to make decisions on [our] behalf,” a reference to Iranian attempts to meddle with internal Iraqi politics and make gains from the dispute between the Kurds and the central government.

Despite stating in the past that “it is not a crime to have relations with Israel,” Barzani refrained from meeting with Israeli or Jewish officials during his visit to Washington. The Kurdish Regional Government still maintains ongoing relations with pro-Israel groups mainly through its Washington office, headed by Qubad Talabani.

By all accounts, Iran’s nuclear program is not high on Kurdistan’s list of concerns. The Kurdish leader was more worried about the future of his own region in face of what he views as an attempted power grab by the central government in Baghdad, which had promised to allow more autonomy to the Kurds.

In his April 5 speech, Barzani demonstrated the frustration of Iraqi Kurds with the United States, which it accuses of leaving Iraq in the hands of a leader who has a growing appetite for centralization. With thinly veiled threats of separation, the Kurdish leader has sharpened his criticism of Prime Minister Nouri al-Maliki, who heads Iraq’s national unity government. Tensions between the central government in Baghdad and the Kurdish capital of Erbil are fed by disputes over oil development in the Kurdish region and by the decision of Maliki to increase his influence by taking charge of Iraq’s military and of the interior ministry.

“The Kurds do not believe that the U.S. military withdrawal means the end of a positive American role in Iraq,” Barzani said in his speech. The Kurdish leader met with President Obama and Vice President Joe Biden, both of whom carefully supported his call for ensuring limits on the power of Baghdad’s central government.

The long-term relationship between Israel and the Kurds is one based on mutual interests and often unspoken understandings.

For Israel, Kurdistan was an island of non-Arab friendship and a possible bridgehead to the Gulf. For the Kurds, Israel offered an alliance and a path to the West while struggling for self-determination in Iraq, Iran, Turkey and Syria. Former Kurdish leader Mustafa Barzani, Masoud Barzani’s father, was considered a friend to Israeli military and defense officials.

Pro-Israel Jewish activists viewed support for the Kurds, a small nation struggling for self-determination in a hostile Arab neighborhood, as helping Israel reach out to a natural ally.

“The Kurds were never against Israel,”” recalled Morris Amitay, a veteran pro-Israel American lobbyist who has maintained contacts with Kurdish officials for more than three decades. “Our Israeli friends always appreciated our friendship with the Kurds.”

Iraqi Kurds, on the other hand, have looked to American Jews as allies who can help open doors in Washington and gain international support.

“The Kurds learned a lot from watching the Israeli model,” Yaphe said. “They learned what to do to win the hearts and minds of the West, mainly the U.S., to build strong alliances.”

“They have a fairly strong, positive approach to Israel, because they identify with Israel’s historical and political themes,” Olson said.

Years of close cooperation between Israelis and Kurds have led to endless tales of secret cooperation and covert actions, all aimed at hampering Tehran’s ambitions for regional dominance.

Reports earlier this year attributed an attack on an Iranian nuclear facility to Israeli and Kurdish fighters. Both sides denied any involvement in the attack. Other reports spoke of Mossad agents roaming free in Iraqi Kurdistan and of Israeli efforts to train and equip Kurdish forces as a counterweight to Iran’s growing influence.