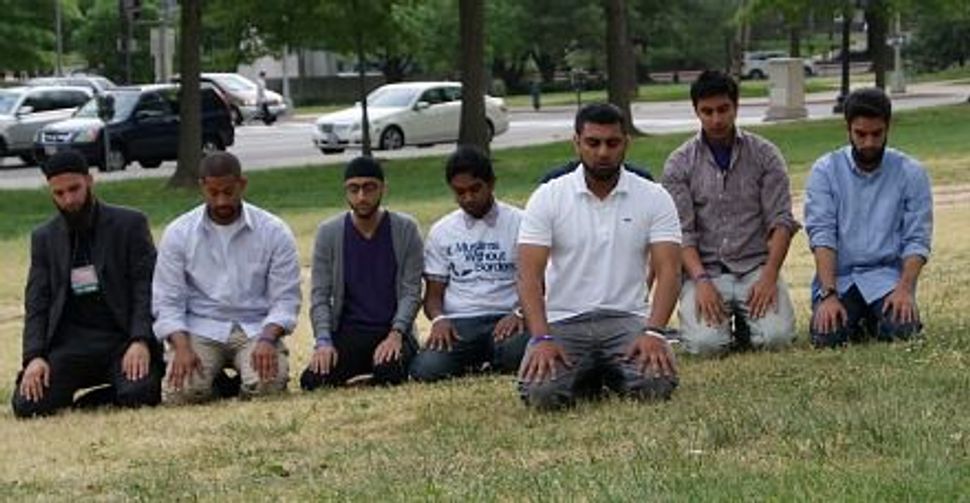 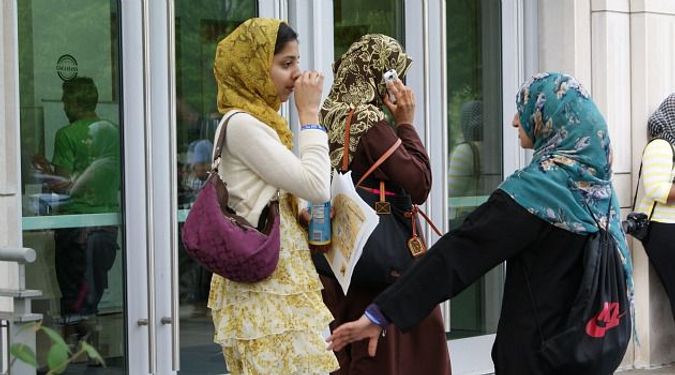 Radical or Regular?: The Muslim Students Association is often shunned by Jewish groups as a hotbed of Islamic radicalism. But Jewish student groups find the MSA to be a reliable partner for interfaith dialogue. Image by nathan guttman

In their cautious dialogue with American Muslims, national Jewish groups have long steered clear of the Muslim Students Association, one of the biggest Muslim groups in the country and one that many Jewish communal officials see as extremist. But that red line is increasingly being ignored by Jewish students at colleges across the country, where campus Hillel foundations are finding their local MSA counterparts to be congenial partners for interfaith activities.

National Jewish organizations, even those involved in interfaith ties, largely avoid interacting with the group, pointing to incidents in which MSA students were involved in anti-Israel activity. But according to activists and some experts on Islam in the United States, MSA, America’s leading Muslim campus organization, has long left ideology behind and now focuses chiefly on student affairs.

“We try to keep religion and politics separate,” said Rabbi Mordechai (Michael) Rackover of Brown RISD Hillel, which is actively reaching out to MSA on campus. Rackover rejected the claim that MSA is a radical group, saying that “just like any other generalization, those who say these things don’t have the facts.”

Yehudit Barsky, director of the division on Middle East and international terrorism at the American Jewish Committee, on the other hand, advised “extreme caution if anyone is thinking to engage with them….The image they try to project is not necessarily who they really are.”

Two events in recent years brought critics’ claims of extremism within MSA to the forefront. One involved an attempt by 11 activists of an affiliated group at the University of California, Irvine, to heckle Israel’s ambassador to the United States during a speech on campus. The other surfaced following a February investigative report by The Associated Press detailing an extensive effort by the New York City Police Department to infiltrate MSA chapters and to spy on activists.

An NYPD agent signed up for, among other things, a whitewater rafting trip organized by MSA students at The City College of New York, where he recorded students’ names and noted in police intelligence files how many times they prayed. None of the participants was suspected of any links to terrorism.

“I felt so betrayed,” said Aamna Anwer, MSA’s national vice president, who is in charge of chapters in the United States, as she recalled learning about the undercover surveillance of her group. “When you spend so much time doing things for this country, trying to be a good citizen, and then you hear about this kind of spying tactics, it’s very hurtful.”

The surveillance, which took place between 2006 and 2007, included placing undercover agents in New York area MSAs and instituting digital surveillance of emails and of Web activity of chapters throughout the northeast. When the program was exposed, the NYPD pointed to 12 people arrested or convicted of terror charges who had once been members of MSA. In view of this information, NYPD spokesman Paul Browne told AP, the department “deemed it prudent to get a better handle on what was occurring at MSAs.”

Anwer, like most MSA members today, came of age in a post-9/11 era in which suspicion toward Muslims has been part and parcel of her life experience. Still, the news of the NYPD’s surveillance program took her and other MSA members by surprise, mainly because it came at a time when the FBI and local law enforcement agencies were engaged in an outreach effort to mosques and Muslim organizations, aimed at building trust between the two sides.

Founded in 1963, MSA initially focused on foreign Muslim students attending schools in the United States. The group drew much of its ideological background from the Muslim Brotherhood in Egypt and from affiliated Muslim groups in Asia. But within a decade, the group began to cater primarily to American Muslim students. This shift also led the group to step away from the Ikhwan, the Arabic name for the Muslim Brotherhood, said Edward Curtis IV of Indiana University-Purdue University who studies American Muslim groups.

“In the ’70s, some students had a dream that societies will be ruled by Islamic values, but this was parallel to the dreams of some Christians and Jews at that time,” said Curtis, author of the 2009 book “Muslims in America: A Short History.” He added that since the Gulf War in 1991, MSA has “left behind” any involvement in foreign affairs and focused on internal Muslim student issues. “To say there was any coordination with the Muslim Brotherhood is a fantasy of Islamophobes,” Curtis said.

“To be honest, most people don’t even know who the Ikhwan are,” Anwer added. “I didn’t know until I learned from a friend of mine who is Egyptian.”

Some watchdog groups keeping tabs on Muslim groups in America remain suspicious. “MSA has gained legitimacy on American campuses as a benevolent collegiate faith club; however, under this moderate veneer, MSA advances a different agenda among impressionable college students,” the Investigative Project on Terrorism stated on its website. The Investigative Project’s extensive research of MSA noted calls by MSA activists for spreading Islam in America. The research also provided detailed names of activists who were later involved in terror-related activities.

Another group, Campus Watch, also listed extreme remarks made by MSA activists and cited events hosting individuals later charged with terror activity. “There is overwhelming evidence,” Campus Watch stated, “that the MSA, far from being a benign student society, is an overtly political organization seeking to create a single Muslim voice on U.S. campuses — a voice espousing Wahhabism [the fundamentalist brand of Islam found in Saudi Arabia], anti-Americanism and anti-Semitism….”

If MSA does serve as a hotbed for extreme ideology, this facet was impossible to detect at the group’s East Zone Conference, which took place in Washington from April 18 to April 20. Nearly 500 students attended workshops, heard lectures on Islam and Muslim life in America, and networked. If it weren’t for the small group of male students praying in a nearby traffic median or for the few students wearing hijabs, one would be hard pressed to distinguish the MSA conference from meetings of any other student group.

In a session on racism, participants engaged in a candid discussion on the issue within their own community. One raised the matter of divides between Sunni and Shia Muslims; another noted with concern that after 9/11, African Muslims tried to distance themselves from Arab Muslims; several others spoke of their parents’ generation’s difficulty in accepting friends and spouses from diverse backgrounds. “My parents have sparks of racism,” one student said. Another added, “For our parents, it’s hard to realize that we are American.”

Some of these themes could have easily reflected conversation in Jewish and other immigrant communities several generations ago. Still, the American Jewish community is struggling to shape its approach to MSA. Early attempts to engage with the Muslim community resulted in clear guidelines that focused on the Islamic Society of North America as the preferred partner for Jewish-Muslim dialogue. Another major organization, the Council on American-Islamic Relations, remains outside the circle of dialogue for most Jewish groups. When it comes to MSA, there is no clear policy.

Mainstream national Jewish groups keep their distance. “Many MSAs around the country are involved in attempts to delegitimize Israel,” said Oren Segal, director of the Anti-Defamation League’s center on extremism. He stressed, however, that since each MSA chapter is autonomous and make its own policy decisions, “it would not be fair to say everyone who is involved with MSA is problematic.”

The American Jewish Committee stressed concerns over MSA’s ideology and over the group’s actions on some campuses. Some chapters, noted Barsky, participate in events such as Israel Apartheid Week. “These events create an atmosphere on campus that causes discomfort for Jewish students,” she said.

The Jewish Council for Public Affairs, an umbrella organization also involved in interfaith relations, does not have a policy regarding engagement with MSA.

Hillel, the Jewish campus life organization that has the most opportunities to engage with MSA, is more open than others in dealing with its Muslim counterpart on campus.

Surprisingly, this is true even at U.C. Irvine, where one of the harshest clashes took place between pro-Israel and Muslim students. In February 2010, 11 students, eight of them members of the Muslim Student Union — an MSA affiliate — were arrested for disrupting a speech by Michael Oren, Israel’s ambassador to the United States. The resulting criminal case against the Muslim students, who are known as the Irvine 11, divided Jews and Muslims at the school. Muslim students viewed the prosecution as a demonstration of the extreme measures to which Muslims have been subjected in comparison with other groups that have staged similar actions. Pro-Israel Jewish campus activists saw the Muslims’ protest as an act of delegitimization of Israel.

Now, however, Jews from Hillel and Muslims from the MSU in Irvine are looking to work together. “We’re in a new era,” said Daniel Y. Harris, executive director of the Hillel Foundation of Orange County, which is in charge of U.C. Irvine, Chapman University and California State University, Fullerton. “The Orange County Hillel is actively building Jewish student life, and in so doing, we also reach out to numerous groups, including Muslim students in Irvine.” Among other things, the Jewish students invited their Muslim counterparts to participate in iFest, a week of Israel festivities held in late April.

Hillel’s guidelines, explained Dennis Kirschbaum, the national group’s associate vice president for campus service, allow partnering with campus organizations that do not support boycott, divestment and sanctions against Israel. “If there are places in which the local MSA supports that, there will not be partnering,” he said. Kirschbaum noted, however, that on most campuses, Hillel and MSA enjoy a collaborative relationship. “We are very proud of this,” Kirschbaum said. “It is a model for civility, because people can meet and discuss issues without name calling and tension.”