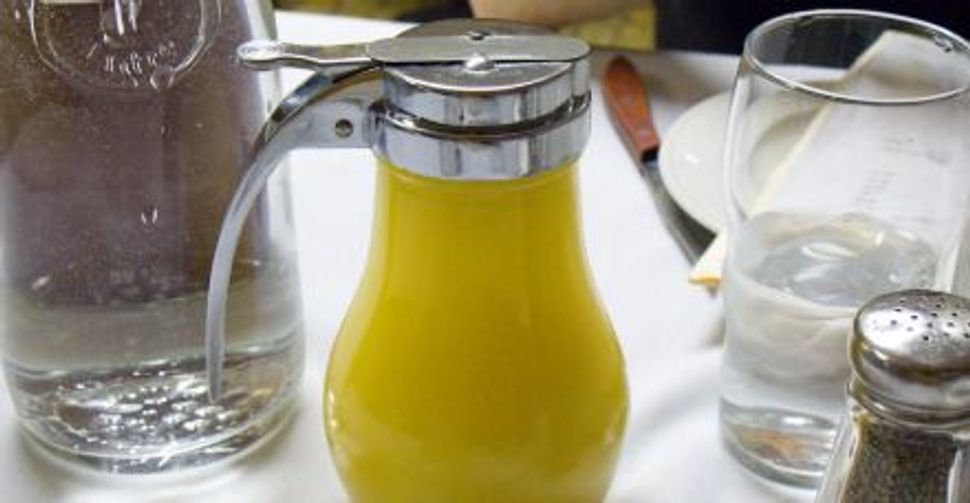 You walk into the restaurant, and there, at the center of each table, is a help-yourself container of cocaine. Well, Jewish cocaine. 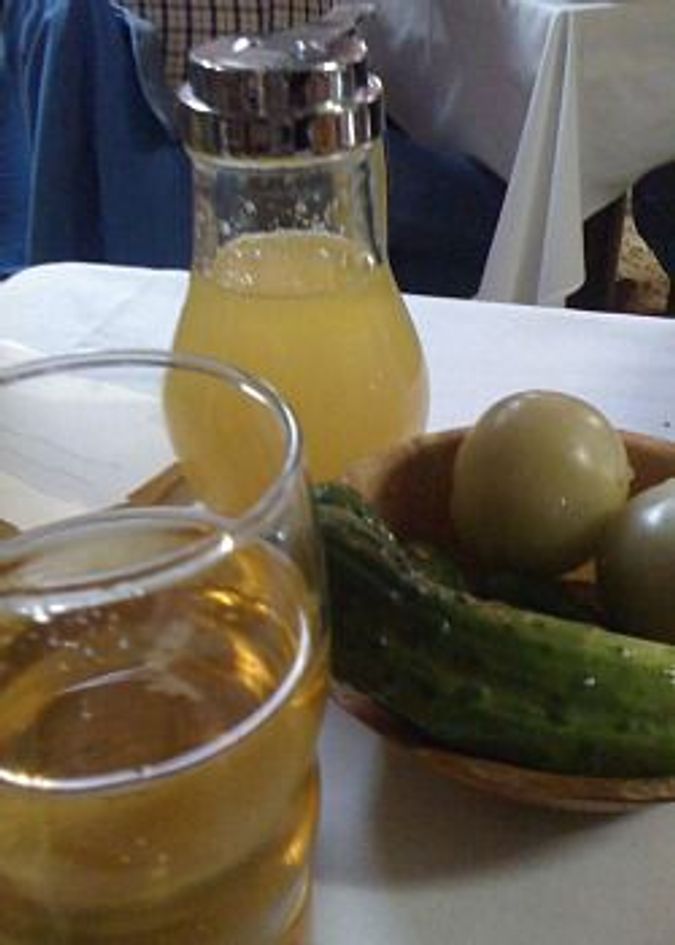 Pure Gold: Schmaltz was once a treasured part of our cuisine. Then life became one big fitness craze. Image by Ezra Glinter

“People get a little confused,” explained David Zimmerman, owner of the uber-Jewish eatery Sammy’s Roumanian Steak House, on New York City’s Lower East Side. That is, diners understand the bowl of pickles and the basket of rye bread. Homey. Nice. But they are confused by the fact that next to these wholesome items, there seems to be, in full public view, an entire pancake syrup jar full of yellow, pourable chicken fat — a food so fraught with anxiety, joy and just plain shock value, it should come with a tablet of Xanax. (And, of course, some stents.)

Instead, all it comes with is that confounding gift: freedom. Patrons are free to slather it on the rye or stir it into their mashed potatoes. Heck, they can mix it with their vodka — which some do.

“They think it’s orange juice,” Zimmerman said, chuckling. Generally those are the younger patrons, or the non-Jewish ones. They’re about to gulp down their screwdriver when they realize: “What the…? The two liquids aren’t mixing.” “Then they say, ‘This doesn’t look too good,’” said Zimmerman, who encourages them to drink it anyway, because why waste good schmaltz?

That would be a shande. A scandal, kids, a scandal. In the olden days — the days before people were expected to read labels, blanch kale and use dumbbells for exercise instead of as a label for their sons-in-law — schmaltz was golden. (Well, it still is. But “golden” in a more metaphoric sense.) “My mother used to make it,” recalled Marilyn Meltzer, a retired telephone company employee in Boston. “The house smelled wonderful when she made the gribenes” — little pieces of chicken skin and onions fried up in that savory fat. Meltzer’s mom, like most yidishe mames of an earlier era, rendered her own chicken fat and saved it, sometimes for months, in coffee cans. Then the family used it like butter, scooping it onto bread for sandwiches, or frying in it, or even baking with it. But because it wasn’t made with milk, you could eat it with a meat meal and still be kosher. “My mother used to bake pies, and her apple pies were, I swear to God, so good, my sister and I fought over them. So she used to make one for each of us,” Meltzer said.

That kind of glorious excess is what most people remember about schmaltz — the love that went into it, the smells that surrounded it and, especially, the innocence that allowed everyone to revel in it. Remember when Coca-Cola had real cocaine in it?

Of course you don’t. It’s been about 100 years. But that’s the closest analogy. It was fun (and, to a certain extent, deadly) while it lasted. And then, poof! Everything changed. Life became one big spinning class, with us forever pedaling toward that elusive place called “Health,” also called, “Constant Guilt About Everything Except Quinoa.”

Today, “everybody agonizes,” said Carol Klenfner, erstwhile publicist for everyone from the Rolling Stones to The Who. “So, as I’ve told my kids, don’t over-think it.” If it feels good, eat it — and that includes eating Klenfner’s potato-fried-onion casserole (Aunt Helen’s recipe), made with copious quantities of schmaltz. “Everyone raves about it and complains: ‘Oh, my God! I can’t believe how much I’ve eaten!’” They feel bad about feeling good. Klenfner just rolls her eyes.

Another schmaltz stalwart, genealogist Janice Sellers, points out that “every time you turn around, a new study shows something is bad and then they come back and say it wasn’t so bad, after all.” So the Californian fries her quesadillas in schmaltz. “They get super crispy!”

Cynthia Flash Hemphill still keeps a jar of chicken fat in the freezer. She uses it to make her matzo balls — a trick the West Coast mom of two learned not from her bubbe, but from “a TV chef in Seattle.”

And yet, these women are few and far between. Schmaltz, once so integral to the Ashkenazi experience, has become a toxic artifact from an unenlightened era, like toy soldiers made of lead. “We were doing ‘A Day in the Shtetl,’” said Audrey Berman, a grants specialist, remembering a Sunday school activity she organized in Lincoln, Neb., a few years ago. While the girls in the group were willing to wear babushkas, and most of the kids were game to drink tea sweetened with jelly, when Berman started to explain, “Now we’re going to spread this on our bread” and they saw what “this” was, they clamped their mouths shut. “We wanted them to know: This is schmaltz!” Berman said. And the kids wanted to know: When can we leave the shtetl?

Which is what we all have done, leaving the schmaltz behind. It belongs to an age less concerned with cholesterol and more concerned with making a slice of bread into a meal. What looks to us like a heart attack in a jar once made gloomy lives a lot brighter. Now and then, if you’re willing to walk on the wild side, it can do the same for you.