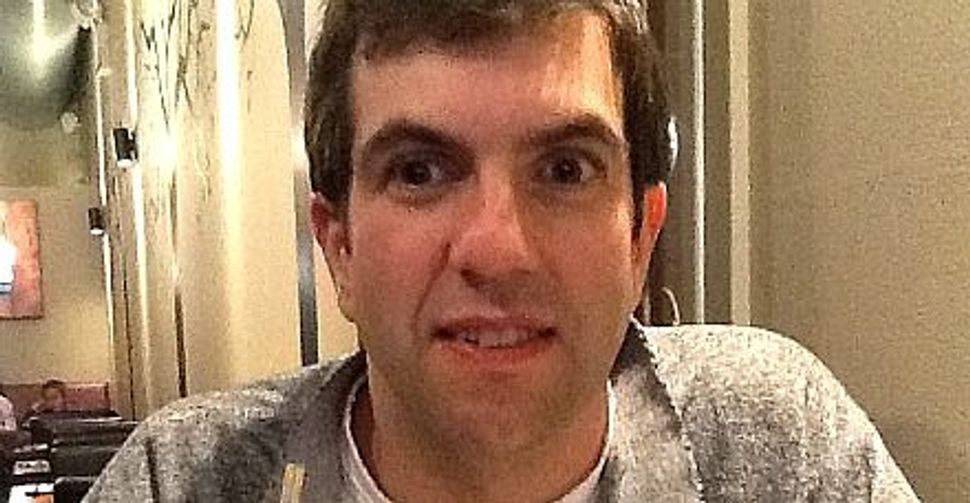 During a recent visit to a cafe on Manhattan’s Upper West Side, A.J. Jacobs is doing all the things he rails against in his latest book. Instead of eating slowly and mindfully, the journalist and author is juggling a laptop, phone and fork while wolfing down kale and quinoa salads. He isn’t using his portion-control plate, and he’s not masticating each vegan-organic-kosher bite at least 15 times in accordance with his “Chewdaism” philosophy. 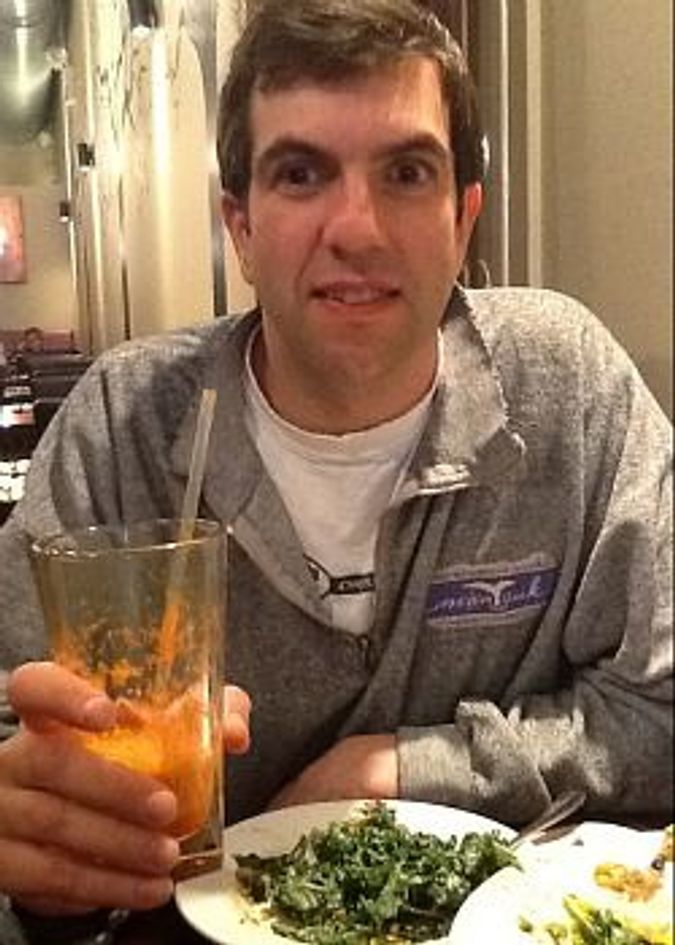 In “Drop Dead Healthy: One Man’s Humble Quest for Bodily Perfection” (Simon & Schuster), Jacobs experimented with myriad regimes, exercise routines and gadgetry, attempting to turn back the clock on a dangerously sedentary lifestyle. “I was a champion sitter,” Jacobs said. “I would sit for 16 hours a day, and that is just so bad for your heart.”

Jacobs, 44, decided to change his unhealthy lifestyle in 2009, after he landed in a Caribbean hospital with pneumonia during a family vacation. His wife, Julie, laid down the law. The devoted mother of three boys — 5-year-old twins and an 8-year-old — was not about to become a young widow because her husband was chained to his desk, munching on Snackwell’s cookies.

Jacobs is the editor at large at Esquire magazine and the author of “The Know-It-All” and “The Year of Living Biblically.” He is known for immersing himself in his subjects (a process called “experiential journalism”). For “Drop Dead Healthy,” he did just that. Faced with improving his health, he decided to try anything and everything — and to write about it. He gathered an advisory board of medical and fitness experts, attempting to improve every organ and bodily system.

Jacobs fought through a germophobic aversion to gyms for workouts (he still runs home to shower), checked into a sleep clinic (he ended up buying a didgeridoo, an Australian wind instrument, to cure his snoring), tried a trendy juice fast and practiced both raw food and Caveman diets. From pole dancing to “strollercizing” to tossing boulders and running barefoot through Central Park, Jacobs enrolled in every class he could find, taking a break on the Sabbath. Some Saturdays, instead of working out, he walked and shot hoops with his boys.

The goal was not weight loss, though he’s 12 pounds lighter than when he started as a 172-pound, 5-foot-11-inch “skinny-fat” guy. Jacobs was hunting for truth amid our country’s highly charged obsession with health. What he discovered changed his life.

Exercise and staying in motion became paramount. “When I talk to my sons, I squat down and then I pop back up. So I do 50 squats a day just talking to my kids,” Jacobs said.

And when he’s not working on a desk that he jerry-rigged over a treadmill, he’s constantly fidgeting, officially known as “incidental physical activity.”

“Fidgeting is wonderful. Moving in your chair, tapping your foot, you can burn 250 calories a day,” he said. “My goal is to stop the negative image of fidgeting and bring it back to its proper place.”

Jacobs concluded that there’s no need to spend big bucks to get healthy. Little purchases, like dumbbells, a vegetable steamer and a pair of chopsticks, can be as beneficial as the most expensive trainer or gym.

Among his new habits: “It’s good to have five or six smaller meals throughout the day. Because I find if I get really hungry, I’ll just eat whatever.” Jacobs cites 12th-century Jewish philosopher Rambam, who said, “Only eat until you are three-quarters full.”

Jacobs said the worst thing people do in the name of health is beat themselves up for lapses. “I’m human — I slip, I regress. But I try,” he said.

Jacobs’s two-year project in pursuit of better health was not intended to produce another self-help book; rather, it was meant to entertain and enlighten people. “I’m not a doctor,” Jacobs explained.

Yet, he prefers being approached for health tips rather than about spiritual dilemmas. After “‘The Year of Living Biblically,’ I was asked, ‘Why does God let evil exist? Why should I divorce my husband?’…. I’d do my best to answer.”

Included in “Drop Dead Healthy” are “Tuesdays With Morrie”-like visits with his beloved grandfather, whom he told, “I’m going to include you in the book because I’m going to live as long as you.”

“Even in his 90s, my grandpa was still involved in projects, still coming up with ideas. You can retire, but you still have to be active, have a passion,” Jacobs said.

Since finishing the book last August, Jacobs is not hitting his neighborhood Crunch as frequently, but he does exercise. For people who feel they don’t have enough time for exercise, he suggests a concentrated workout called HIIT, or high-intensity interval training: “It’s not pleasant, but all you do is go running for 30 seconds, sprinting as hard as you can, then rest or walk for 30 seconds. Then do it again, 10 or 12 times.”

These days, he’d rather be home on his wife’s ancient StairMaster, or lifting weights while watching “Downton Abbey,” than taking classes. “I must have authority issues, because I don’t like when people yell at me,” he explained.

Of all the things he’s done in his life, “This is the most surprising twist in my career,” Jacobs said.

“Basically I ignored my body for 40 years…. I think there is a Jewish stereotype that we are too intellectual and don’t pay enough attention to our body. I don’t know if that’s true in general, but for me it was. I loved to study but I forgot about the body.”

Lisa Amand is a feature writer from Brooklyn.