From The YIVO Archives: The Unknown Memoir of Tuvia Bielski 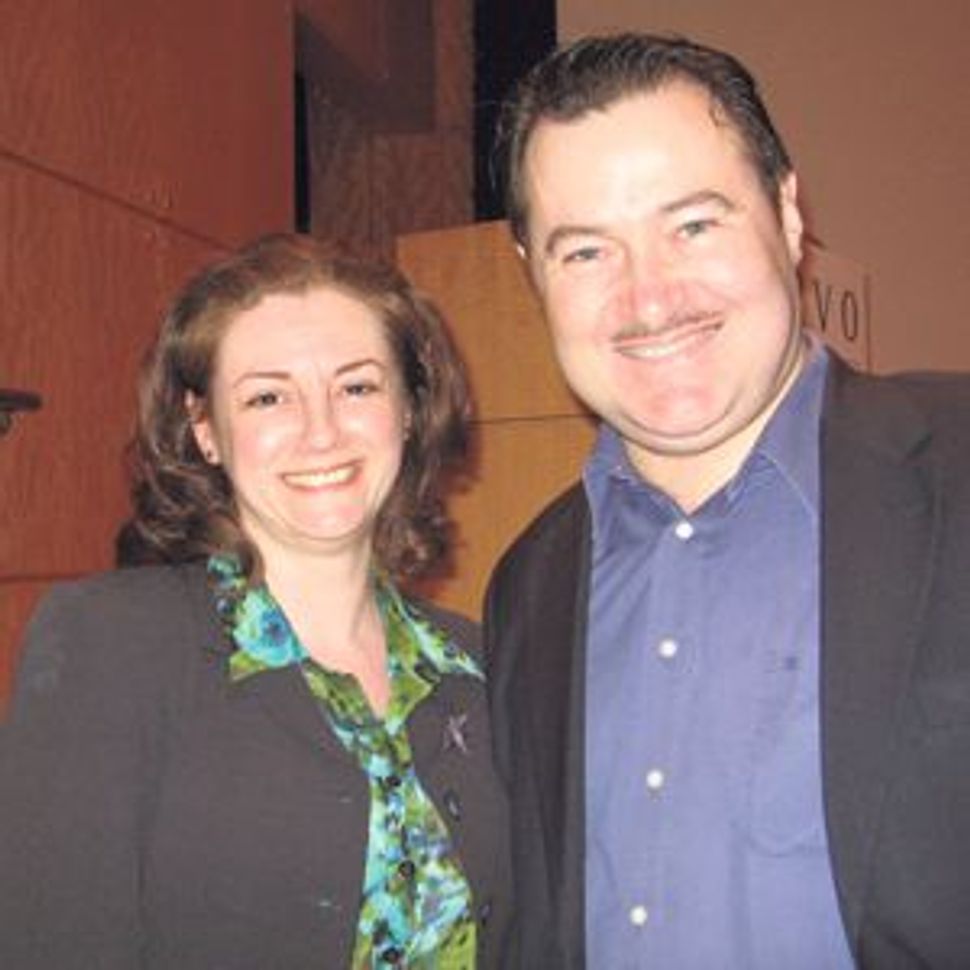 On April 19, the YIVO Institute for Jewish Research launched its “Treasures From the YIVO Archives” series at the Center for Jewish History. This first event included a panel discussion of — and readings from — a recently rediscovered memoir by Tuvia Bielski, leader of the Bielski partisans. Given to YIVO in 1955, the unsigned, handwritten manuscript resurfaced in the Institute’s archives in 2008. Robert Bielski, Tuvia’s son, now 59, confirmed the memoir’s authorship in 2010, when he exclaimed, “This is my father’s handwriting!”

Husband-and-wife actors Yelena Shmulenson and Allen Lewis Rickman ⎯ who appeared in the Yiddish prologue of the Coen Brothers’ 2010 Oscar-nominated film, “A Serious Man,” and are both in HBO’s Season 3 opening episode of “Boardwalk Empire” ⎯ read excerpts from Tuvia’s manuscript in Yiddish and in English translation by Barbara Harshav, president of the American Literary Translators Association (ALTA). Harshav, a translator from French, German and Hebrew whose output includes three volumes of Yiddish poetry, explained: “When I translated the Bielski manuscript, I wanted to capture his voice. I did not want to smooth out the roughness. This is the way they spoke. It was not the Yiddish of Sholem Aleichem or [I.L.] Peretz. Bielski wrote about his life in what was then Poland…. of how he got from his shtetl in 1939 to Warsaw and the evolution of his Jewish identity.” 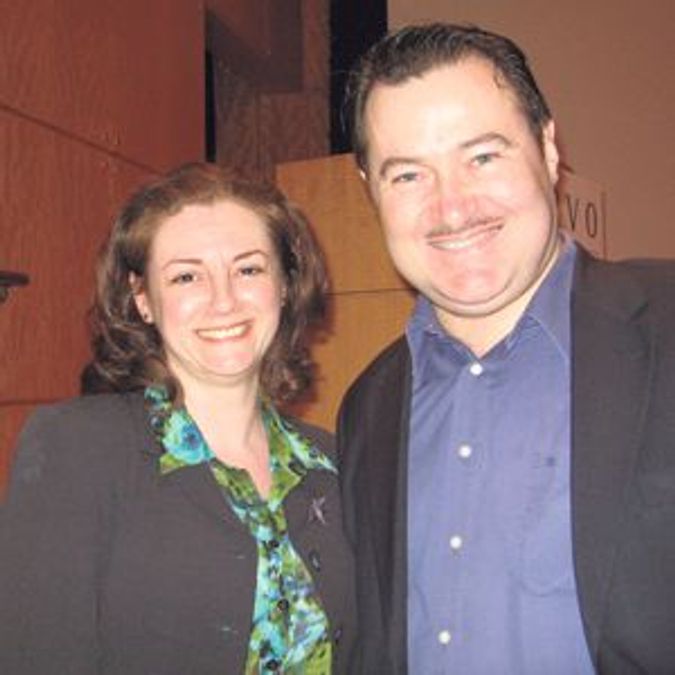 “My father’s recollection was written in Israel [not long after] the liberation,” said Robert Bielski, founder of Manhattan Commercial Realty Corp. and a member of the Associates Board of the Museum of Jewish Heritage, A Living Memorial to the Holocaust. Alluding to the memoir, Harshav said: “Tuvia tried to convince the people in the ghetto to go to the forest.” Robert Bielski said, “My father trained in the Polish army, and he knew how to shoot a rifle. Those he tried to save were city people… [Yet] life in the forest was easier than in the ghetto.” In the 2008 Paramount Vantage film, “Defiance,” Daniel Craig portrays Tuvia Bielski. Robert Bielski also said that the “grandfather of Jared Kushner, Ivanka Trump’s husband, had been a Bielski.”

The April 23 Jewish Board of Family and Children’s Services (JBFCS) benefit at The Plaza, emceed by WNBC news anchor Melissa Russo, honored two of its own trustees⎯Fran Levy and Joyce Cowin. Also honored was Julie Menin, chairperson of NYC’s Community Board 1, who announced that she plans to run for Manhattan Borough president in 2013. A founder and former president of Wall Street Rising, a not-for-profit organization dedicated to revitalizing Lower Manhattan, Menin congratulated the JBFCS for being “on the front lines helping the city’s most vulnerable people.” According to Anthony Mann, president of JBFCS’s board of trustees, the 500 guests helped raise $2.2 million to help deal with what JBFCS Vice President and CEO Paul Levine referred to as “tsoris [Yiddish for woes], of which there is no shortage.”

In a no-nonsense thank you address, Cowin, a philanthropist, stated: “I have been with BFCS, a beneficiary of UJA-Federation of New York, for 50 years. JBSCS, with a staff of 2,000, serves wherever there is a need, no matter where you come from. If you are or are not a Jew is irrelevant…. I love this city for what we do at JBFCS so we can have peaceful days and a good night’s sleep.”

There was some good news at the April 25 Food Allergy Initiative’s 13th Annual Luncheon, held at Cipriani 42nd Street and emceed by Lori Stokes, an anchor at WABC-TV New York. Dr. Hugh Sampson, director of the Elliot & Roslyn Jaffe Food Allergy Institute at Mount Sinai School of Medicine, told the elegant crowd of 550: “FAI has launched a major research initiative to develop a safe, effective FDA-approved treatment that will protect the majority of food allergy sufferers.” Listing the protocols, which “will involve hundreds of patients at multiple medical centers,” Samson said that FAI’s ultimate goal is “to develop standardized OITs (oral immuno-therapies) to teach the patient’s immune system to tolerate the allergen.”

“You’ll be able to go to restaurants and parties without worrying,” said a teen in “Teen Talk: Food Allergies,” an FAI-produced video on YouTube. In the video, teens talk about becoming independent and having your kissing partner first brush his/her teeth, lest there is particulate matter in the mouth. It’s a fun view.

“I have a seven-year-old son who is allergic to fish and shellfish,” said keynote speaker Julie Menin, chairperson of NYC’s Community Board 1. “I hope these therapies will be available to my son, Mason, before he reaches his teens.” Menin listed some of FAI’s initiatives, such as “helping the nation’s third-largest school district, Chicago Public Schools, stock auto-injectors in their 675 schools, starting this fall.” Guests left with “goodie bags” stuffed with candies, cakes, cookies and donuts made available by on-site vendors who produce allergen-free nibbles.

Of all the April 19 Holocaust commemorations on my calendar, the Workmen’s Circle/Arbeter Ring Remembrance of the 69th Anniversary of the Warsaw Ghetto Uprising had personal resonance for me. Held at the WC/AR West 37th Street headquarters, in cooperation with the Congress for Jewish Culture, 3GNY and the Jewish Labor Committee, the program included remarks by WC/AR Executive Director Ann Toback, who spoke of “empowering new generations of leaders, who will make sure that our teenagers never again are called upon to enter into uprisings as happened in Warsaw.” There were comments by Matthew Shapiro of 3GNY and songs from the ghetto by Maida Feingold.

In 1947, as a student at WC/AR Mitlshul (high school), music director Mendl Elkin halted a rehearsal for that year’s WC/AR Warsaw Ghetto Commemoration, taking me to task for chatting. “Have you no respect for this song, for what happened in Warsaw?” he chastised me in Yiddish. I snapped back: “You are here in New York, just singing about Warsaw. But I was there! I saw what happened!” then stormed out of the room. Yes, I did apologize and participated in that year’s WC/AR commemoration.

Though my mother and I left Warsaw before the ghetto walls went up, I can still re-live the firebombing of 34 Swieto-Jierska, where we lived. (It housed one of the last bunkers to survive the 1943 razing of the ghetto.)

Fleeing, my mother and I were swept up by mobs of disoriented, terrified people running from one end of the city to the other, seeking safety where there was none. In the midst of the inferno, I remember a bearded father with a goose-down pillow under his right arm and a pair of brass candlesticks in his left hand, dragging a barefoot little girl of six or seven as he kept screaming, “Rokhele, vu bistu?” (“Rachel, where are you?”) Many of my childhood friends perished in the ghetto, as did my mother’s two sisters, their husbands and children.

From The YIVO Archives: The Unknown Memoir of Tuvia Bielski