Haredi Draft Could Cause Gender Issue 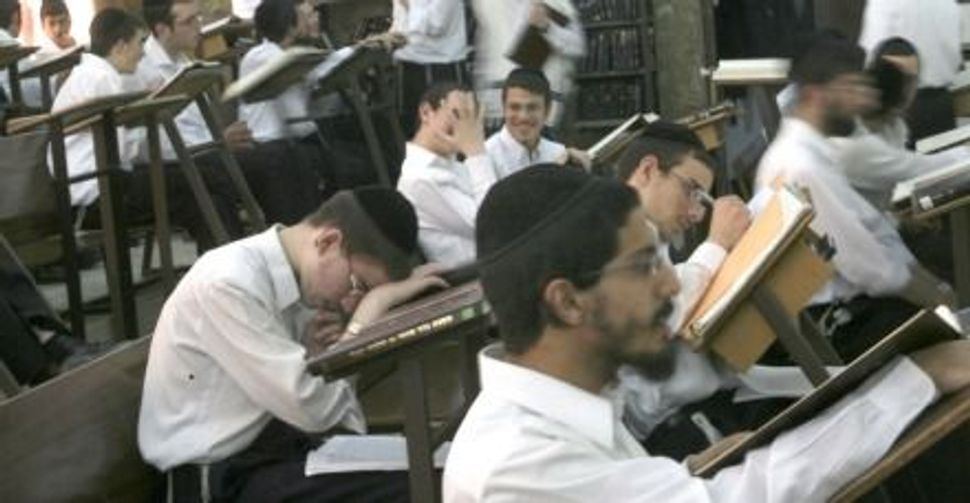 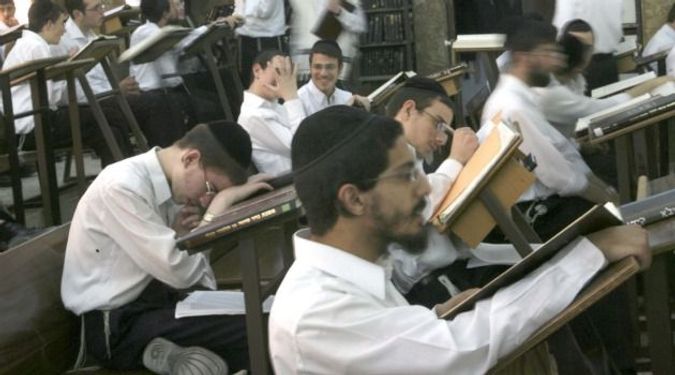 Exempt No More? If the law that exempts Haredi men from serving in the Israeli armed forces is changed, they will join the ranks. But at what cost to Israel?s female soldiers? Image by getty images

After six decades of exempting ultra-Orthodox from the army, the Israeli government appears resolved to draft them. But the plan, widely popular among secular Israelis, may have unintended negative consequences for the tens of thousands of women serving in the military.

The planned Haredi draft — a product of the recent deal that Israeli Prime Minister Benjamin Netanyahu cut with the Kadima party to bring it into his coalition — is widely deemed a fulfillment of basic democratic principles. “Equality of rights and equality of obligations is a fundamental tenet in a democratic society,” wrote Haaretz columnist Moshe Arens, a former government minister.

But some of the strongest advocates of democratic rights in Israel say that drafting Haredim could cause more harm than good. They believe that the demands Haredim will inevitably make, such as to consume only food prepared under special supervision, and their obedience to rabbis on all matters even when at odds with military commands, will disrupt army protocols and military discipline. And they worry most of all that the demands of Haredim when it comes to gender will disadvantage the thousands of women who serve, as they have since the state’s inception. There is intense controversy in Israel today about Haredi attitudes towards gender encroaching on the public sphere, such as on public buses where women — in violation of court rulings — are expected to sit at the back, and on billboards in Jerusalem, where pictures of women are conspicuously absent.

“One of the prices of this is that women will be denied equal opportunities in the army,” said Yedidia Stern, vice president of research at the Israel Democracy Institute.

The concerns of prominent Israeli feminist Anat Hoffman run so deep that she opposes a military draft of Haredim and wants them to perform civilian service only “in their own places, in their own neighborhoods.” Hoffman, executive director of the Reform movement’s lobbying arm, the Israel Religious Action Center, told the Forward, “Maybe the cost of having [Haredim] in the army is not worth it, because half of the army is women and if the army becomes a place where they are excluded and discriminated against, this will be a terrible thing.”

The Israel Defense Forces has closed ranks on the ramifications of a Haredi draft, which means that the Forward’s request for comments on the subject were declined and individual soldiers are not allowed to talk. But Elazar Stern, former head of the division that will be tasked with integrating Haredim, the Manpower Directorate, admitted, despite his enthusiasm for a Haredi draft, that “if they will be spread all over the units it will come with a problem, [as] they don’t want to see girls or work with them.”

Rarely have the conditions looked more conducive for a government to stop exempting Haredim from the military service it demands from all other Jews. On July 31, the law that upholds the exemption for Haredi men will expire. (Haredi women are exempted by a different mechanism, which will stay in place). And the power of Haredi parties in Netanyahu’s government to cause a coalition crisis over the issue has now been defused by the inclusion into the government, on May 8, of the largest opposition party, Kadima.

What is more, Kadima is highly enthusiastic about drafting Haredim and will be in charge of writing the new legislation. The Kadima lawmaker drafting it for the government, Yohanan Plesner, told the Forward that despite speculation to the contrary, there is no way that the new law will compromise by letting all Haredim perform civil instead of military service. He promised a “gradual but dramatic increase in members of the ultra-Orthodox community serving in the military and civil service.”

The rapid growth of the Haredi community means, according to Plesner’s projections, that in a decade, about one-quarter of Israelis reaching the conscription age, 18, will be Haredi. Israel, he said, “cannot afford from a moral point of view nor from the army’s operational needs” to exempt them. Leaving the exemption for female Haredim in place, and accounting for some Haredi men entering civil instead of military service, he expects his law to result in one in 10 soldiers being Haredi.

The question for which nobody has a detailed answer is how the IDF could handle such a large influx of Haredi soldiers without the effects of their religious demands being felt across the military.

Currently, the religious requirements of the few Haredi soldiers who serve — fewer than 1,000 out of the IDF’s estimated 175,000 active soldiers — hardly affect the operation of the army. This is because they are drawn mostly from the liberal fringes of ultra-Orthodoxy and because they are segregated in special Haredi units. But the army is resolute that it will not go down the segregation route for everyone once a Haredi draft is in place. Chief of Staff Benny Gantz told Haaretz in April that all-Haredi units should be a marginal phenomenon. “I don’t want to create an army like the one in Lebanon, with a brigade for every sect,” he said. Plesner told the Forward that he doesn’t want all Haredim in separate units.

Haredi leaders are virulently opposed to members of their community being drafted. But even if they are somehow brought around to the idea, it is widely accepted that, in an era when segregation is expanding into new areas of Orthodox life, such as transport, their ultimate red line will be that Haredi men will not serve alongside women.

Rabbis argue that, politics of the draft aside, the gender issue is a non-negotiable matter of Jewish law. “They cannot serve in mixed units,” Nachum Eisenstein, aide to Israel’s most influential Haredi rabbi, Yosef Shalom Elyashiv, told the Forward, reasoning, “The Haredi posekim [religious authorities] cannot make compromises that are not based on halachic standards.”

Complying with this part of Halacha, Jewish law, would necessarily affect women. Wherever the army would seek to place Haredi men, there are currently women serving. The IDF prides itself on equality of opportunity for women and has women in all divisions, including 1,500 female combat recruits entering the army each year. It would be difficult for Haredi men to avoid serving with — or under the command of — women, as 50% of all officers are women and all roles are open to them.

Plesner admitted that he did not have a clear solution for how this “major challenge” to the issue of women’s status in the IDF could be reconciled. He insisted that it would not be harmed, but said that he has no “magic solution” and that he wants to “leave some of the problem solving to the people who will replace me in the future.”

Aside from the issue of women, drafting Haredim into the IDF poses several other challenges, economic and practical.

Soldiers receive a stipend from the army of about $100 a month, but married soldiers receive a larger sum, which is calculated according to various personal circumstances and comes out several times higher. Today, few soldiers are married, but Haredim marry younger than the general population, meaning that drafting them will prove expensive.

Practically, Haredi soldiers would require many special provisions. Yehuda Meshi-Zahav, a leader from the liberal flank of ultra-Orthodoxy who is open in principle to some form of Haredi service, said that soldiers from his community would require, among other conditions, ritual baths to use each morning, time for prayer and study, and food under special kashrut supervision.

The issue of food could prove particularly difficult, not only because of the added expense of having Haredi-standard kashrut across all bases and changing field rations, but also because most Haredim eat only food produced under the supervision of “Badatz.” This kashrut seal, however, is controlled by the strongly anti-Zionist Eida Haredit, which would be highly unlikely to supervise within the army.

Meshi-Zahav, who heads the ZAKA rescue and medical organization, said that Haredi soldiers would also need to be permitted to follow their rabbi’s rulings to determine the answers to such questions as what tasks could be performed on the Sabbath.

The only real precedent for Orthodox soldiers following religious rules are the Religious Zionist men serving in the Hesder program, which combines army service with stints of yeshiva study.

But this program has had its difficulties. Last year, there was outrage across the country after the surfacing of media reports of male religious soldiers walking out of military events where women sing. Nineteen reserve major generals sent a letter to Defense Minister Ehud Barak and Gantz in November, raising concerns about this and also about pressure from Religious Zionist soldiers to remove women from some areas of IDF operation.

In the main, however, Religious Zionists flourish in the IDF because their leaders are enthusiastic about their service. The rabbis they answer to are ultra-nationalists whose rulings allow all sorts of leniencies for the sake of effective army service and who share the army’s priorities. But Haredi rabbis are as antagonistic toward army service as Religious Zionist rabbis are enthusiastic, and they say that they will never make the army’s needs a legitimate consideration when making rulings. “If there’s a will there’s a way, but there’s absolutely no will,” said Eisenstein, who went on to argue that his community’s opposition to the army will make Haredim poor soldiers. “A soldier is not a good soldier without motivation,” he added.

Stern is worried by the prospect of large numbers of soldiers whose first loyalty is to rabbis who disapprove of their service. “They will listen to their commanders, but definitely the last word will be with the rabbis,” he said, describing this situation as a “duality of authority” that is “very dangerous.”

Haredi Draft Could Cause Gender Issue