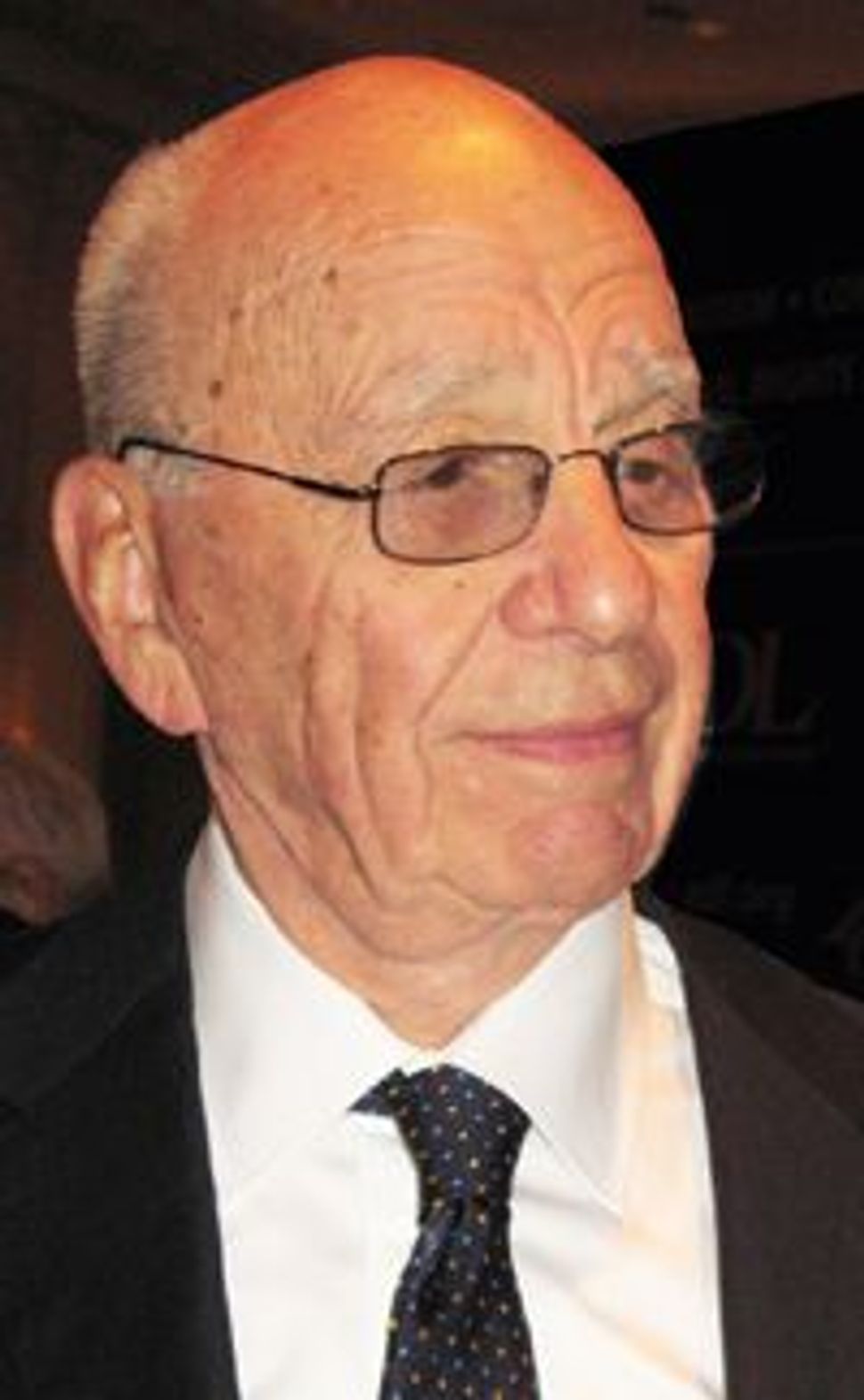 “If you’ve been reading the papers lately, you realize I am pretty happy to be anywhere, particularly amongst such great friends,” said News Corporation Chairman and CEO Rupert Murdoch, the honoree at the Museum of Jewish Heritage: A Living Memorial to the Holocaust’s 16th annual Heritage Dinner, held on May 7. Roger Ailes, CEO of Fox News Channel and chairman of Fox Television Stations, presented Murdoch’s Award.

“I’m particularly touched to be honored by your Heritage Award in the shadow of the Statue of Liberty,” Murdoch said. “As your fabulous exhibit on Emma Lazarus demonstrates, you don’t have to be Jewish to appreciate what Lady Liberty stands for. But it helps.

“I believe these [museum] walls carry a lesson from history. The enemies of the Jews are the enemies of freedom — and in this fight America can never be neutral. [I have spoken] about the war against the Jews that continues even after the defeat of Nazi Germany. Much of this war is focused on Israel…. It is a war designed to make Jews feel unsafe wherever they call home… and to make the Jewish state an international target for haters…. I wish I could tell you that the fears of Jewish communities in Europe are exaggerated. They are not. We all want peace in the Middle East… so when the prime minister of a democratic Israel says he fears Iran means what it says and intends to wipe Israel off the face of the earth, I will not second-guess him from the safety of New York…. The Israelis know another uncomfortable truth: that Israel will stop Iran’s nuclear program if she determines no one and nothing else will…. To my mind, that is the grand promise of Zionism: that Israel exist so that Jews can protect themselves.”

Museum director David Marwell lauded Murdoch for his unwavering support for the State of Israel. “You have been a steadfast voice,” he said, adding, “There is one area where your severest critics and your most ardent friends are in agreement: They are both convinced you are Jewish.” Event participants included Robert Morgenthau, chairman of the museum’s board, and event co-chair Bruce Ratner, chairman and CEO of Forest City Ratner Companies.

During my chat with award-winning director, producer and screenwriter Andrew Shea prior to the opening of his film “Portrait of Wally” at the Quad Cinema on May 11, he told me: “I am New York City born. My mother is Jewish, so the Jews can claim me. My father was Boston Irish Catholic, so the Catholics can claim me. I went to a Unitarian school.”

The film follows the convoluted saga of Austrian artist Egon Schiele’s 1912 painting of his mistress, Walburga “Wally” Neuzil, which a Nazi seized from its rightful Viennese gallery owner, Lea Bondi. When, 60 years later, it surfaced on the wall of New York City’s Museum of Modern Art, it set in motion a historic court case that roiled the international art world. The lawsuit was launched by Robert Morgenthau, Manhattan’s district attorney at the time, and it consumed Bondi’s heirs as well as the Austrian Schiele collector Rudolf Leopold. “I was not an expert in restitution,” Shea told me. “I tried to tell the legal story in a human way. The case sent shockwaves through the U.S. and European museums The Austrians changed their laws as a result of this scandal…. But the bittersweet quality of the resolution was a good result, after all.” Yet Shea added: “I regretted the painting going back to Vienna…. Austria was a nation in denial. For years following the war, [they] saw themselves as victims, not as perpetrators. The 13-year war over ‘Wally’ was a battle over history and memory.”

During the intermission of a recent performance of “One Man, Two Guvnors” at Broadway’s Music Box theater, comedian-writer David Steinberg said to me, “If you loved Monty Python and the Marx Brothers, you will love this. Don’t miss it!” From the moment the skiffle band “The Craze” — made up of Jason Rabinowitz (lead vocals), Austin Moorhead (lead guitar), Charlie Rosen (music director/bass) and Jacob Colin Cohen (drums, percussion and washboard) — raised the curtain, I was helpless to control my laughter. The new show is based on a comedy by Carlo Goldoni (1707–1793) about a servant and his two masters (guvnors), and the main character, inhabited by James Corden, is the fuse that ignites the evening’s theatrical pyrotechnics. Set in Britain, with a superb cast speaking in Cockney accents, the play is fuelled by Corden’s ad-libbed asides to the audience. The night I saw the show, Corden’s character’s requested something to eat, and an audience member replied with an unscripted offer of “a hummus sandwich,” which left Cordon dumbfounded. The audience roared!

During intermission, I chatted with broadcast journalist Barbara Walters and former secretary of the U.S. Treasury Robert Rubin. Steinberg mentioned that he just returned from taping a show of Jewish humor titled “The Chosen Show,” hosted by Judy Gold and starring Canadian Comics Jeff Rothpan, Stevie Ray Fromstein and Jon Steinberg. Reminiscing about his Canadian-Jewish schooldays, David Steinberg recalled: “I went to a Talmud Torah in Winnipeg; my sister went to the Peretz shul and the Sholem Aleichem shul. My father was from Bessarabia and was brought to Canada by the Jewish Agency. It was from a place as terrible as Russia to Winnipeg! Oy, the cold! Sadly my father never lived his dream of an all-Yiddish-speaking Canada.” We returned to our seats for a delicious second helping of Corden and company.

“I’m no relation!” Roxanne Palin declared as she accepted the Lizette H. Sarnoff Award for Volunteer Service at the Albert Einstein College of Medicine’s Spirit of Achievement Luncheon, held on May 9 at the Plaza Hotel. Palin, a mother of two children that have life-threatening food allergies, is the driving force behind the New York chapter’s annual Family Day carnival, held each summer at the Hamptons . In five years, the event has grown to 1,500 attendees from 300. It is now the organization’s largest fundraiser. Regarding life-threatening allergies, Palin said, “At some point, if not you, someone you know will be affected.”

Dr. Mark Einstein (also no-relation!) holds the position of director of clinical research for women’s health and gynecologic oncology at both the Albert Einstein College of Medicine and Montefiore Medical Center, also received a Spirit of Achievement Award. In his address, he spoke about “the scourge of cervical, ovarian and uterine cancer that has impacted so many women. Sixty years ago, cervical cancer was the No. 1 cancer killing women. Now that it’s no longer at the top, I look forward to not having a job!”

A Spirit of Achievement Award was also presented to internationally renowned jewelry designer Lorraine Schwartz, who said, “There are two kinds of people in the world: those who never lost anyone in life or, like some of us, who lost someone.” Schwartz included herself as part of this second group, referring to the loss of her mother, someone “I can’t bring back.” She credited her mother for her own success, “because of her style and sense of glamour.” Schwartz, whose creations are worn by socialites, royalty and celebrities like Beyoncé, stated, “Everything we do to raise awareness will help.”