Tefillin for Women, by Women 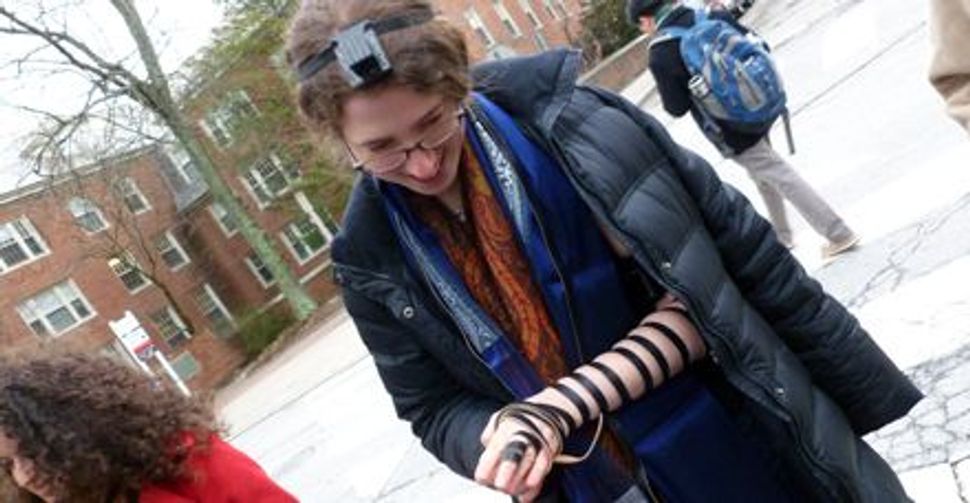 It Completes Her: Moses uses borrowed tefillin as part of her daily prayer practice. Image by courtesy of molly moses 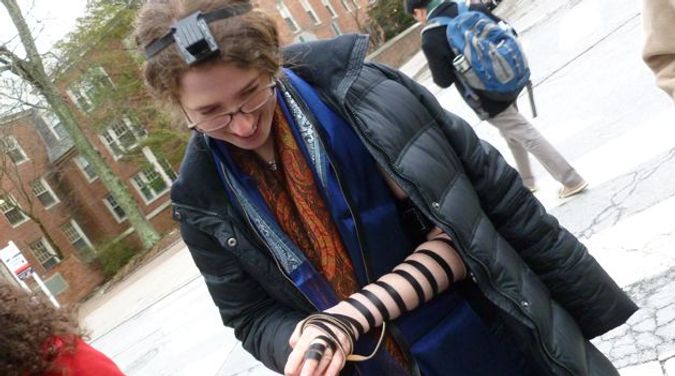 It Completes Her: Moses uses borrowed tefillin as part of her daily prayer practice. Image by courtesy of molly moses

When Molly Moses graduated from Harvard University in 2011, she wanted to pray each day wearing tefillin. But she couldn’t afford the several hundred dollar investment required to buy a pair of the leather-covered boxes, which contain tiny parchments with handwritten Torah verses. Moses had borrowed tefillin from friends in the past; now she wanted her own set.

She had heard of organizations that lend free tefillin, but knew they would lend only to men. “Once, I called a place and they assumed that I was getting them for a child, for a bar mitzvah,” she recalled.

Then Moses discovered the Women’s Tefillin Gemach, an organization that lends donated tefillin to women — and only to women — for six months at a time.

Having her own set of tefillin has helped her in her daily prayer practice. “I would feel not as complete in my observance were I not able to daven with tefillin,” said Moses, 22, who will begin full-time Torah study at Manhattan’s Yeshivat Hadar in September. Since each pair is handmade and a different size, “it gives me a great opportunity to see how I feel with a certain type of tefillin.”

The Women’s Tefillin Gemach appears to be the only organization that lends tefillin to women. The term gemach is a contraction of the Hebrew words gemilat chasadim, or “giving kindness,” and usually describes a free loan society. Jen Taylor Friedman, a ritual scribe, founded the organization in 2007. “People kept giving me old sets of tefillin, and [other women] were asking me if I knew where they might borrow tefillin,” said Friedman, whose work as a scribe involves making and checking tefillin as well as writing Torah scrolls and wedding contracts.

Most of the tefillin comes from rabbis, many of them Conservative, who while cleaning up their synagogues find a dozen or more sets that someone tucked away decades ago and forgot about. “The tefillin might still be kosher, but their congregants who want to try it out can usually buy their own,” Casser said.

So the rabbis send them to the Gemach, where Friedman and Casser carefully check the parchments for damage: If moisture gets inside the tefillin, the ink on the tiny documents can crack and fall off. Stitches on the leather exterior can come undone. Over time, the black dye on the leather boxes can wear off, and their square edges can become rounded. All these flaws need correcting before tefillin can be restored to kosher status, Casser said, and some just aren’t salvageable.

The Gemach has lent tefillin to a couple of dozen women in total, Friedman said, and it currently has six sets out on loan. Women who borrow tefillin can either return them at the end of the six months or send the Gemach an inexpensive set to replace them. “I would love it if people took more advantage of the service,” Casser said.

But tefillin use has not taken hold among women in the liberal denominations, the Gemach’s primary market, the way wearing a prayer shawl, or tallit, and yarmulke have. One reason may be that they are used only during weekday worship, and relatively few women attend daily minyan.

There is also something about tefillin, which involve wrapping leather straps around the arm and head to attach the boxes, that “is so male connected that it’s hard to work through,” said Anne Lapidus Lerner, an emerita member of the faculty at the Jewish Theological Seminary, home to one of two Conservative rabbinical schools in the United States.

“I had a lot of trouble doing it, initially,” said Lerner, who has owned her own set since 1984. “It took me a long time to figure out that it’s not gendered, but it’s Jewish, so it can be mine, too.”

Lerner had expected wearing tefillin to become common practice among women in the Conservative movement once the denomination made the decision, in 1983, to ordain women as rabbis. It didn’t. “I had foolishly anticipated that there would be no question about it,” she said.

“Davening every day in tefillin is not the practice of all men, so that just makes it harder,” Lerner said.

Changing that, she said, would have to begin with rabbis, schools and camps requiring girls of bat mitzvah age to wear tefillin.

Years ago, Lerner was a scholar-in-residence at a Conservative synagogue in Kalamazoo, Mich. “I went to minyan there Sunday morning,” she said. “There were a lot of teenagers there at that minyan, and boys and girls were all in tefillin. When I asked why, the rabbi said, ‘It’s the rule here.’ That made all the difference.”

Lerner said she finds the practice personally rewarding. “It’s a way of starting the day with an act of physical closeness to God,” she said.

But as it did for her, the idea of wearing tefillin during prayer takes some getting used to for most women.

Moses grew up in a Reform-affiliated family and had never seen anyone, male or female, praying in tefillin until she was a Harvard student and encountered it at the Hillel Conservative minyan. When she first saw it, “I remember it looking alien. There was something about it that was off-putting.”

She overcame that feeling as “part of accepting Halacha [Jewish law], the yoke of heaven, upon myself,” she said.

When her six-month lending period with the Gemach tefillin is up, Moses plans to pay for another set to give to the Gemach and to keep the tefillin to which she has grown attached.

“I’ve built a bond with this particular pair,” she said. “Because I know that they were once someone else’s, it would feel rude to just toss them off. It almost feels as if they’ve done me a favor. I feel good when I’m wearing this pair.”

Tefillin for Women, by Women