From Awkward to In Love 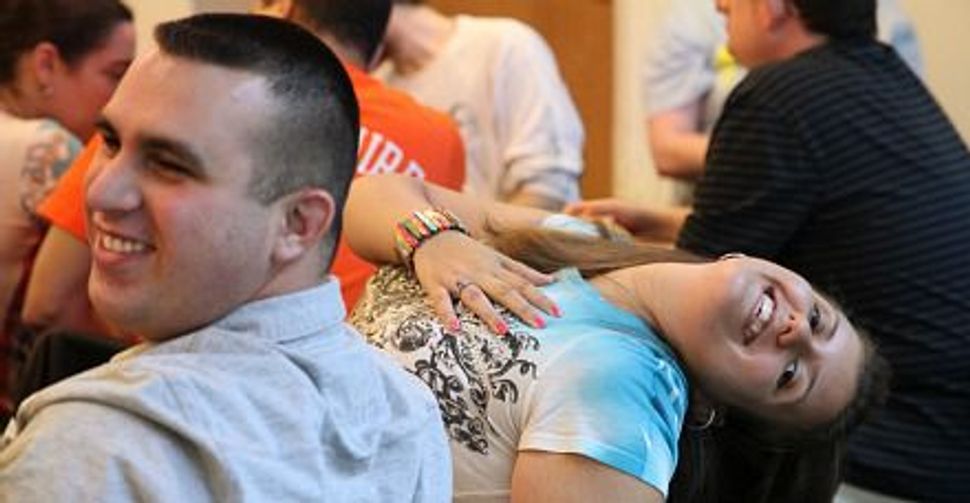 Image by courtesy of adaptations 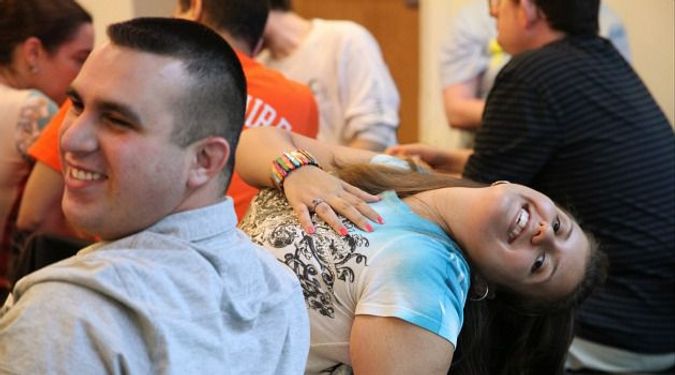 Useful Advice: Participants in a workshop for people with Asperger?s syndrome discuss tips for dating and socializing. Image by courtesy of adaptations

Sitting in a circle, the group of nine men and women giggled nervously as they discussed things not to say or do on a first date.

“Don’t talk about your last boyfriend or girlfriend,” one plump woman ventured with a giggle.

“Don’t tell them what you don’t like about them,” a broad-shouldered man with curly black hair suggested. “Like, ‘Hey, I don’t like that tic of yours.’”

The others burst into laughter, nodding in agreement.

The discussion was not a training session for recovering fans of George Costanza from “Seinfeld.” The recent session, led by moderator Jeremy Hamburgh in a classroom at the JCC in Manhattan, was part of a dating workshop for young people with Asperger’s syndrome and other special needs. Sponsored by Adaptations, a program that aims to strengthen the independent living skills of special needs individuals, the sessions provide participants with a safe environment to learn about relationships, intimacy and sexuality — areas that individuals with Asperger’s are often ill-equipped to negotiate, because of their inability to perceive many social cues.

Now, these discussion sessions are poised to reach a far greater audience via the Internet. With a grant from the Daniel Jordan Fiddle Foundation, which focuses on adults on the autism spectrum, Adaptations is developing an online dating site for people with Asperger’s and other developmental disabilities.

Unlike other sites that claim to serve people with Asperger’s, the Adaptations site will use a rigorous screening process to ensure that only people with special needs can join the online group or view its participants. The site will also provide free step-by-step dating advice and offer users help on the meetings the program generates. The site will include a blog and a discussion board, both of which will be open to parents, guardians and educators.

Since its inception seven years ago, Adaptations has attracted some 300 members. In addition to the dating workshop, the program today includes a support group for members who identify as lesbian, gay, bisexual or transgender. There’s also a ”girlfriends group,” which aims to help women develop meaningful friendships with other women, and a sports club for male friendships.

“As far as I know, Adaptations is the only program in the country that combines dating, socialization support and career help, all in an integrated community center,” said Allison Kleinman, director of Adaptations.

The program was started by the mother of an Asperger’s child. It has a close relationship with the Seaver Center for Autism Research and Treatment at New York’s Mount Sinai Hospital. Twice a month, a psychologist and several assistants from Seaver teach social skills to Adaptations members. Adaptations itself is part of the Center for Special Needs at the JCC of Manhattan, which is also directed by Kleinman.

Many participants in the dating workshop have already developed meaningful relationships and have even begun to take initiative.

“Now when I’m finished with a session, one of them will say, ‘Hey, guys, let’s go out to dinner!’” related Paige Weinger, a doctoral student at the Seaver Center.

Member Danielle Lazzara, 30, said that since joining Adaptations she no longer feels isolated, and Emanuel Frowner, 31, is happy that he can be himself “without being judged.” He has also been lucky romantically.

“I met a lady, named Cee Gee, who joined Adaptations in May of 2010, and now we are in a great relationship,” Frowner enthused.

“This is becoming a major focus in the field of autism spectrum disorders,” said Jill Brickman, a clinical psychologist with a private practice in midtown Manhattan. “People with autism have the same natural desire to be intimate as others, but they don’t have the social skills, which can be dangerous. They might try something that feels right to them, and then get arrested or be taken advantage of. Programs like these help these young people learn everything that’s involved in dating someone.”

Adaptations also partners with Job Path, a not-for-profit organization that enables people with developmental disabilities to find jobs. The program has started its own business venture, Adaptations Glassware Cooperative. The Brooklyn-based company trains employees to turn wine bottles into drinking glasses and has generated jobs for a number of Adaptations members.

One member, 39-year old Mark Dreyfus, has benefited from both the job assistance and dating aspects of the program. When he first joined, Dreyfus already had a job on Wall Street but couldn’t handle the stress of working with people, said Katrina Reese, Job Path’s assistant director of employment services. Through an individualized program, the Adaptations team found a work situation to address his needs. Today, he repairs computers in a quiet room of a Best Buy outlet while his co-workers deal with the customers at the front desk.

Dreyfus also found his fiancée at Adaptations. A wedding is planned for October at the Hebrew Institute of Riverdale for Dreyfus and his fiancee, Judy Fettman.

Fettman herself did have one criticism of the workshops: She found them intellectually unstimulating. “I would like to see political talks and lectures,” she said.

Contact Rukhl Schaechter at schaechter@yiddish.forward.com. This article was adapted from the Forverts.

From Awkward to In Love