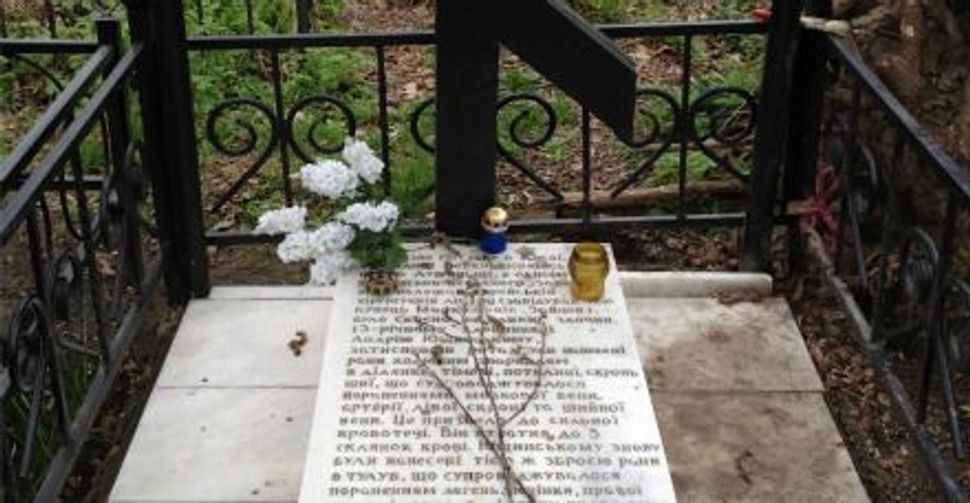 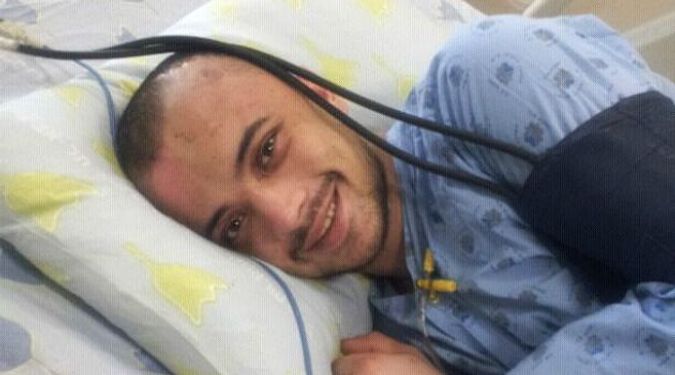 Anti-Semitism Victim?: Alexander Goncharov recovers in an Israeli hospital from injuries suffered in a brutal beating in Kiev. Some believe the attack was an act of anti-Semitism but others have their doubts. Image by world forum of russian jewry

At about 1 a.m. on the second night of Passover, Alexander “Aron” Goncharov stepped from Brodsky Synagogue, in the center of Kiev, into the cold night air. The 25-year-old yeshiva student, who was staying at the synagogue’s hostel, never returned to his room. After hours of frantic phone calls the following day, yeshiva authorities finally found Goncharov at Kiev’s Hospital 17, with massive head injuries, barely alive.

Jewish communal leaders from Brodsky Synagogue portrayed Goncharov, who was wearing a yarmulke when he left the building, as the latest in a long line of victims of Ukrainian anti-Semitism. A few days later, he was flown to Tel Aviv’s Ichilov hospital for emergency treatment and was kept in a medically induced coma. When Goncharov finally awoke, one week later, he said that his attackers had yelled “Yid” as they beat him.

Israel’s chief rabbi Yona Metzger visited Goncharov on Holocaust Remembrance Day, underlining his new status as a symbol of contemporary anti-Semitism. Goncharov told Metzger that he hoped to immigrate to Israel, calling it “the safest place for Jews.” 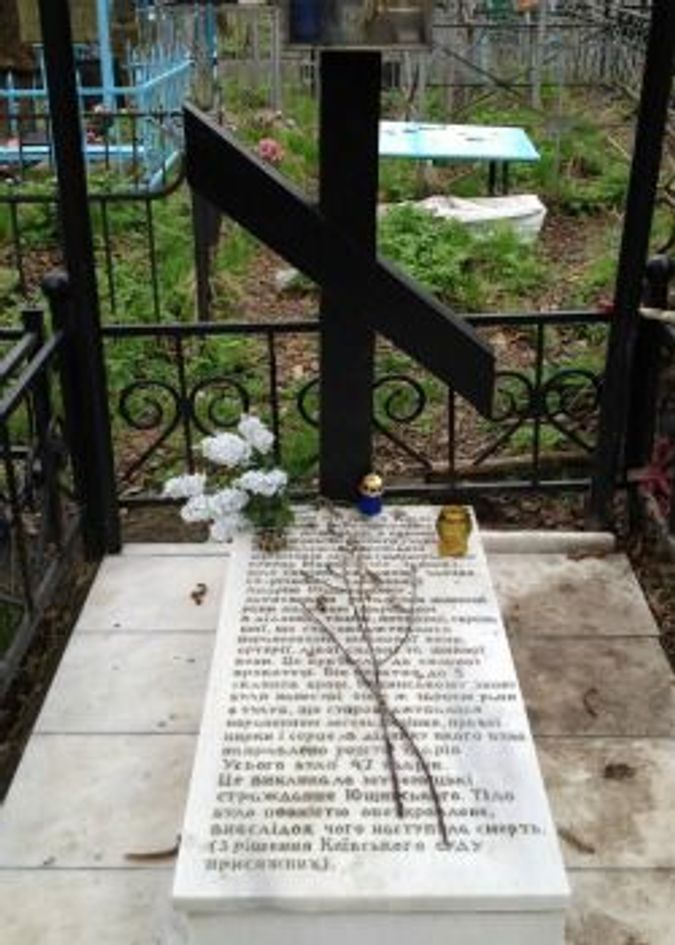 Grave of Andrei Yushchinsky, a Ukrainian schoolboy whose 1911 murder was blamed on Jews. Image by paul berger

But back in Kiev, even many Jews are skeptical about the claim that Goncharov — whose severe beating no one doubts or condones — was a victim of anti-Semitism.

“It has nothing to do with anti-Semitism,” said Yaakov Dov Bleich, rabbi of Kiev’s Podol Synagogue and one of several rabbis who claim the mantle of chief rabbi of Ukraine. “The fact he was taken to Israel will probably stop any [police] investigation in its tracks.”

When I arrived in Kiev one week after the attack, it was with a certain amount of trepidation. “Don’t wear a yarmulke outside of the synagogue,” Leonard Petlakh, a leader of the New York-based Russian-speaking community, warned in an email. But instead of finding a Jewish community on tenterhooks, I met many people who were dubious as to whether Goncharov’s injuries had anything to do with his being Jewish — even as many also acknowledged that anti-Semitism in Ukraine remains a problem.

It is only natural that people outside Kiev would believe that the attack was anti-Semitic. Waves of anti-Semitism have swept over Ukraine for generations, from czarist-inspired pogroms during the late 1800s and early 1900s to Communist-imposed discrimination against Jews throughout much of the 20th century. Even the past 20 years of Ukrainian independence have seen spasms of nationalist-fueled anti-Semitism.

After Goncharov’s almost fatal beating, some encouraged the idea that little had changed. Russian, Hebrew and English-language media around the world were quick to report the “anti-Semitic attack” by a group of suspected neo-Nazis. Alexander Levin, a prominent businessman who has close ties to the Brodsky Synagogue and is the founder of the new World Forum of Russian Jewry, called for a meeting with Ukraine’s interior minister to “demand that law authorities take action.” Days later, Ukraine’s president, Viktor Yanukovych, vowing that Goncharov’s attackers would be found, called on Ukrainians to show “tolerance for people of different beliefs and nationalities.”

Goncharov, who arrived in Kiev from the industrial city of Lugansk three weeks before the attack, had only recently been circumcised. He was not a native of the city. Over the course of a few days, I heard a variety of unsubstantiated rumors about just why Goncharov had gone out into Kiev at 1 a.m. from the yeshiva at which he was lodging. Most of all, people wanted to know what Goncharov was doing between the time he left Brodsky Synagogue at 1 a.m. and when his body was found by a passerby at about 7 a.m. in Bessarabian Square, a busy part of the city, about a 10-minute walk from the synagogue. Few believed he had just lain, unconscious and prostrate, in the city center for six hours, undetected. Several people questioned how an attack by a gang of neo-Nazi thugs in this busy part of the city was apparently witnessed by no one.

A short drive across Kiev from Bessarabian Square, not far from Babi Yar, the infamous ravine where more than 30,000 Jews were murdered by the Nazis in 1941, is the grave of schoolboy Andrei Yushchinsky.

Yushchinsky was stabbed to death in Kiev in 1911, sparking the arrest of Mendel Beilis and one of the greatest blood libel trials of modern history. Beilis, a Jewish brickworks supervisor, was held in prison for two years on charges that he murdered the Christian boy and drained his blood to make Passover matzo. After Beilis was acquitted at trial in 1913, he moved to Palestine and then to America. When he died in New York, in 1934, more than 4,000 people attended his funeral.

Today, Beilis is largely forgotten. But Yushchinsky’s grave has become a shrine for Ukrainian nationalists. The day I visited, fresh flowers lay on the tombstone, which was inscribed with an excerpt from Beilis’s trial transcript and the information that Yushchinsky’s body was found “in the building of the Jewish independent hospital.” The head of Ukraine’s Reform Jewish community, Rabbi Alexander Dukhovny, whom I met a few days later, said the Jewish reference on the grave was actually an improvement. It “used to have a sign that said, ’Killed by a kike,’” he said.

“Yes, there are people who hate Jewish people,” Dukhovny added. “It’s still in their blood.” But he said it is simplistic to assume that anti-Semitism is rife in Ukraine. Even during the Beilis trial, Dukhovny pointed out, Ukrainian Christians, including Orthodox priests, spoke out in Beilis’s defense.

Indeed, the Beilis trial was more a manifestation of Russian than Ukrainian anti-Semitism. The trial was orchestrated by a czarist administration and supported chiefly by the Black Hundreds, a Russian nationalist group that fiercely opposed Ukrainian independence. In Beilis’s 1925 autobiography, first published in Yiddish, the accused man stressed that many ordinary Russians and Ukrainians sprang to his defense. “There was real heroism, real sacrifice,” Beilis wrote according to the latest English translation, published in 2011.

As with other Central and Eastern European countries, Ukraine’s bloody history as a nation subjugated by surrounding countries complicates the problem of how it views its own history of anti-Semitism. Ukraine’s great 17th-century Cossack leader and hero, Bogdan Khmelnytsky, was responsible for the massacre of tens of thousands of Jews. Maryna Bezdenezhnykh, 27, told me that the Jewish experience in Ukrainian history is routinely misrepresented in schools. Students don’t learn about the Holocaust, Bezdenezhnykh said. Meanwhile, she said, Khmelnytsky is seen as a hero, “whereas to Ukrainian Jews he is seen as a second Hitler.”

Several leaders of Kiev’s Jewish community, in separate interviews, drew distinctions between state-sanctioned anti-Semitism, which they say no longer exists in Ukraine, and anti-Semitism at a local level. “In [the] past, all leaders of Ukraine were anti-Semitic,” Levin said. He included in that list former Ukrainian president Viktor Yushchenko, whose Orange Revolution, hailed by Western leaders, was fueled by nationalism. Yushchenko’s rule coincided with the rehabilitation of such Nazi collaborators as Stepan Bandera and with the rise of MAUP (the Ukrainian acronym for the Interregional Academy of Personal Management), a private university that published a slew of anti-Semitic tracts. These included a booklet resurrecting the claim that Yushchinsky was killed to make matzo.

Many Kiev Jews said anti-Semitism persists. Iolanta Veksler, 28, said that when she returns to her hometown of Belaya Tserkov, which has 3,000 Jews out of a population of about 200,000, she is sometimes stared at in the park and called “Yid.” Natella Andriushchenko, principal of Mitsva-613, a Jewish school in Belaya Tserkov, said, “Anyone who says there is no anti-Semitism [in Ukraine] is living with their eyes closed or rarely moves in non-Jewish circles.”

I met Alexander Levin on April 16, in the basement restaurant of the Brodsky Synagogue. He was sitting with Lubavitch rabbi Moshe Reuven Asman, another of Ukraine’s self-proclaimed chief rabbis. Both men were instrumental in arranging for Goncharov to be flown to Israel.

When I related that during my first days in Kiev, several community members appeared skeptical that the attack on Goncharov was anti-Semitic, the two men exchanged a glance. “For me, it’s not very important if it’s an anti-Semitic attack or not,” said Levin, who was wearing blue jeans and a white knitted yarmulke embroidered with an Israeli flag. “What’s important is that a 25-year-old boy is attacked in the middle of a European city at 1a.m.”

Levin ridiculed one police theory, that Goncharov fell from a 6-foot-high parapet in a drunken state.

Still, members of the Kiev community remain unconvinced of claims that he is a victim of Jew hatred. Vyacheslav Likhachev, a researcher focused on racism, said there was little evidence that the attack was anti-Semitic. Likhachev, who has studied anti-Semitism in Ukraine for the Euro-Asian Jewish Congress for 10 years, told the Forward that anti-Semitic incidents have fallen in Ukraine in recent years.

He pointed out that Goncharov was not wearing Hasidic clothing the night of the attack, and that although he was spotted wearing a yarmulke when he left Brodsky Synagogue, no yarmulke was found near his body. Goncharov looks Ukrainian, Likhachev added.

“I don’t want to say there is no Nazi violence in Ukraine,” Likhachev hastened to say. But he said that Africans and Asians suffer much more than Jews. In an article published soon after the attack, Likhachev noted that on the same night Goncharov was injured, an African student was severely beaten. He said that the following week, a court case opened into a “racist pogrom” which resulted in four students from India, Azerbaijan and Turkmenistan being seriously injured. “Unfortunately, the President of Ukraine did not deem it necessary to make a statement on these crimes,” Likhachev wrote.

What exactly did inspire Yanukovych to make his statement condemning the attack on Goncharov remains unclear. But on June 8, the eyes of the world turn to Ukraine as joint host, with Poland, of the European soccer championships. Ukraine’s leaders are already a target of opprobrium at home and abroad because of the jailing of opposition leader and former prime minister Yulia Tymoshenko in 2011.

Under such circumstances, the last thing Ukraine needed was criticism of its response to an outburst of anti-Semitic violence — even if one never took place.