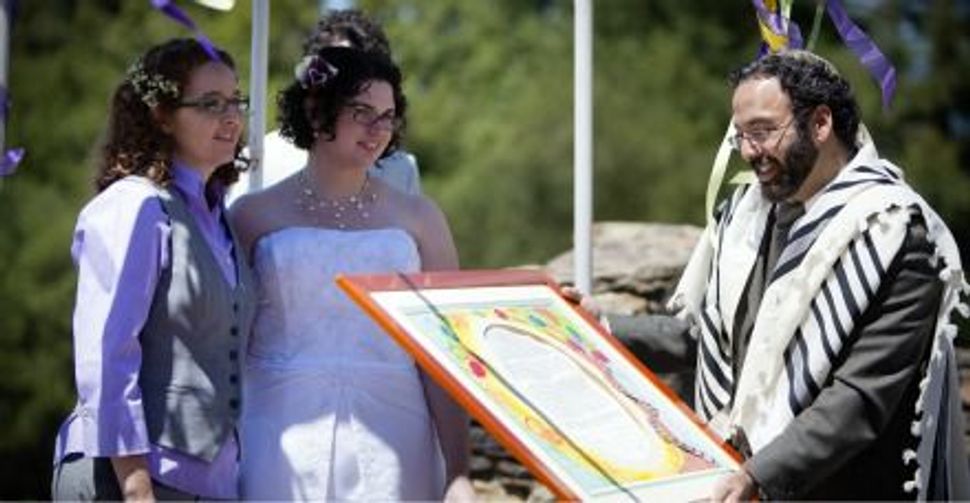 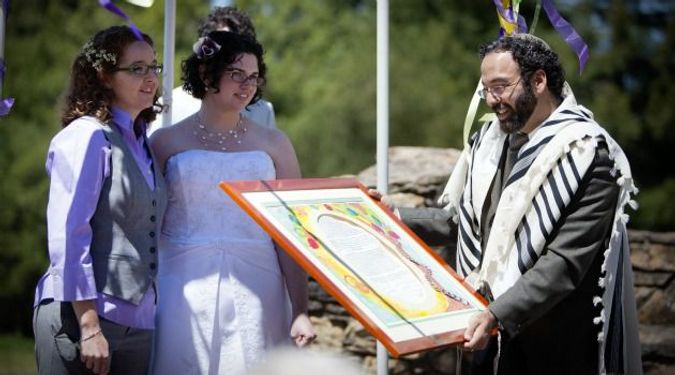 By the Power Vested in Me: Rabbi Menachem Creditor marries Margee Churchon and Kate Smallenburg in Berkeley, Calif. Conservative rabbis are grappling with how to adapt a traditional Jewish wedding for same-sex couples. Image by alison yin and adm golub

When Gerald Skolnik, the president of a group of 1,600 Conservative rabbis, was asked to officiate at a gay wedding last year, he didn’t know where to start. “I was flying by the seat of my pants,” he said. Should the wedding look like a heterosexual ceremony, or something else entirely?

Now he has guidelines to turn to. After years of deliberation, the Conservative Rabbinical Assembly has provided guidance to rabbis for performing same-sex marriages.

On May 31, the assembly’s Committee on Jewish Law and Standards approved templates, culminating a six-year-long process that began in 2006 when Conservative leaders first officially sanctioned gay relationships. Created by Rabbis Daniel Nevins, Avram Reisner and Elliot Dorff, the ritual guidelines detail two types of gay weddings, as well as gay divorce. “Both versions are egalitarian,” said Nevins. “They differ mostly in style—one hews closely to the traditional wedding ceremony while the other departs from it.”

The guidelines passed on a vote of 13 to 0 in the Committee on Jewish Law and Standards, with one rabbi abstaining.

Neither template includes kiddushin, a step in the ceremony in which the groom presents his bride with a ring. It is regarded by most traditionally observant Jews as the essence of the ceremony that constitutes it as an act of marriage.

Instead, the templates detail a ring exchange that is based on Jewish partnership law, an established halachic concept, said Nevins.

“We acknowledge that these partnerships are distinct from those discussed in the Talmud as ‘according to the laws of Moses and Israel,’” said Nevins, referring to the words used in kiddushin, “but we celebrate them with the same sense of holiness and joy as that expressed in heterosexual marriages.”

The committee’s templates are meant not as exclusive formulations that the rabbis would be required to use but as guidelines that Conservative rabbis can rely on. The three authors of the templates, who consulted with gay and lesbian rabbis, among others, in preparing their proposals, have stressed that that they understand individual rabbis retain significant autonomy in interpreting law. Rabbis, they said, will continue to explore and improvise in this still new area of Conservative Halacha.

In the traditional Jewish marriage ceremony that has been performed through the ages, the rabbi recites the first blessing over the wine and a second over certain prohibited sexual relationships. Next is the ring ceremony, followed by the reading of the ketubah, or the legal agreement. Finally, the rabbi recites another seven blessings, known in Hebrew as the sheva brachot. Then comes the breaking of a glass underfoot, followed by a hearty “mazel tov!” Conservative rabbis have used this model as a jumping-off point for gay unions.

For gay weddings, the forms are still evolving. With the assembly releasing its own marriage templates, four Conservative rabbis, some new to gay commitment ceremonies and others familiar with them, shared their rituals with the Forward: 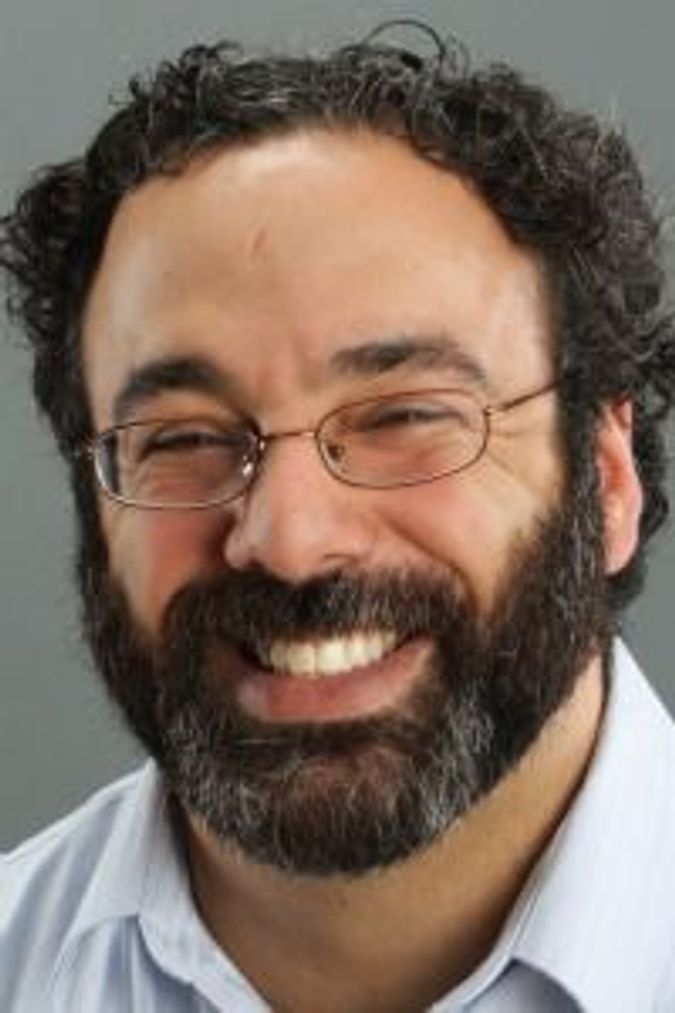 Rabbi Menachem Creditor, who helms congregation Netivot Shalom in Berkeley, Calif., is a traditionalist when it comes to marital rites. “The important thing for me is that same-sex marriage is marriage,” he said. “It is not something different.”

In the 10 years that he has been conducting gay marriages, Creditor has changed virtually nothing in the conventional marriage ceremony, adjusting only gendered language where appropriate. “I see every traditional form as pregnant with meaning,” he said.

Creditor’s perspective is not uncommon among Conservative rabbis. For instance, across the country, Rabbi David Lerner of Temple Emunah outside Boston also hews closely to traditional rites. “I tried to keep the elements as similar as possible so if you walked into that ceremony you would say, ‘I am at a Jewish wedding,’” he said.

But Creditor goes a step beyond most rabbis, maintaining language that might strike others as inapplicable to gay couples. Creditor keeps most of the text in the last of the seven blessings, which refers to the rejoicing of brides and grooms. He changes only the last line to refer to a groom and a groom — or a bride and a bride. The wording “is not an imposition on a gay couple that they should be straight,” he said. “It is an admission that sexual orientation is not a reason to limit joy.” 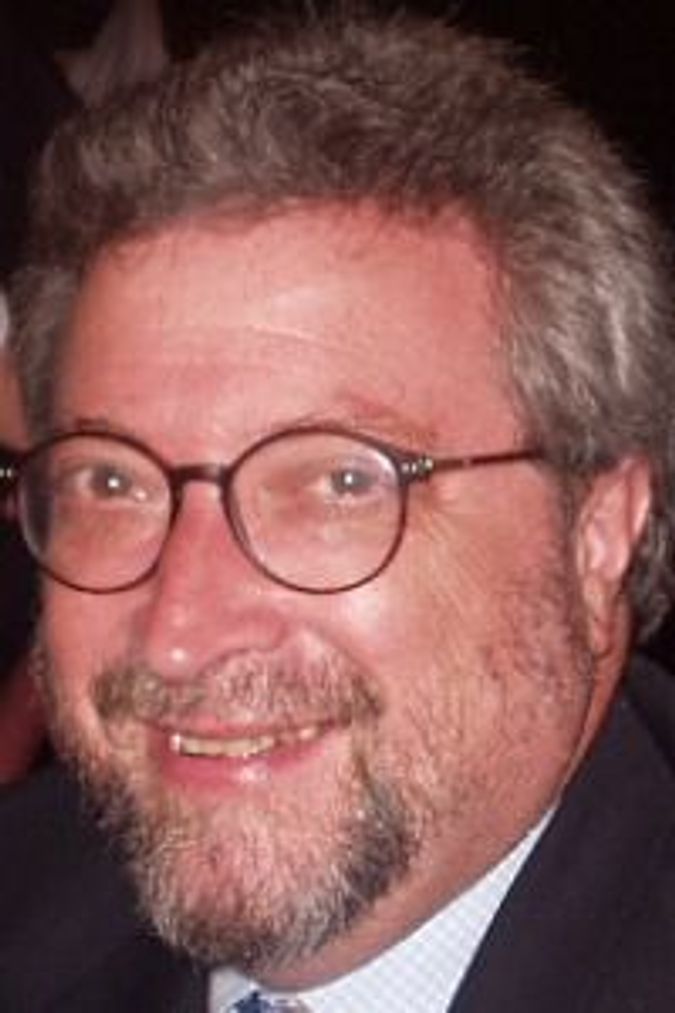 In contrast to Creditor, Skolnik has used a service that hints at the traditional Jewish wedding but ultimately deviates from the ancient rites.

Skolnik, president of the Rabbinical Assembly, roots his ceremony in a foundational Jewish ritual: the blessing over the wine. But for the second blessing dealing with sexual prohibition, he substitutes a prayer from the sheva brachot, which blesses God “who creates man in your image.” “It was an acknowledgment that whether gay or straight, you are a sacred human being,” said Skolnik.

Skolnik created the ceremony last year for a gay male couple at Forest Hills Jewish Center, where he is a pulpit rabbi. By his own admission, Skolnik was hesitant in applying traditional Jewish marriage rites to a homosexual union. “My effort was to try and craft some kind of ceremony that would be spiritual and Jewish, but not a clone” of traditional marriage, he said.

The ceremony did not take place under a chuppah, nor do the grooms break glasses underfoot. Rather than use the traditional prayer over the ring exchange, Skolnik replaced it with language he found on a liturgical website called Ritualwell. Though a surrogate ketubah was present, the seven blessings were not.

Though Skolnik was reluctant to map traditional wedding rites onto a gay union, he had no qualms about marrying the couple in the eyes of the state. Since gay marriage is legal in New York State, Skolnik signed the couple’s marriage license. 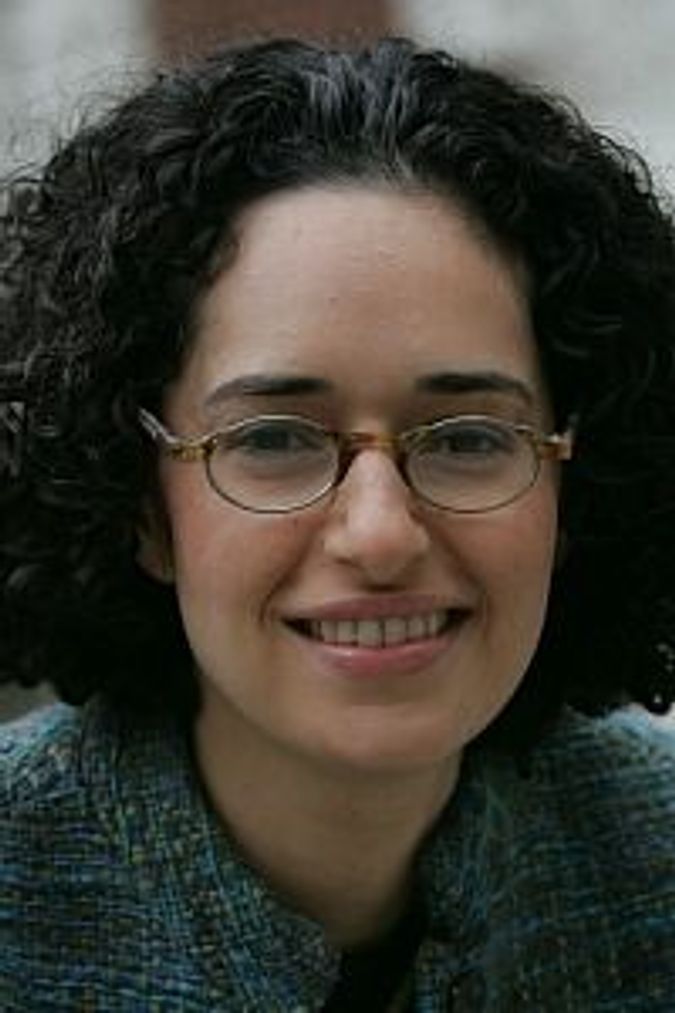 “My starting point,” said Ayelet Cohen, former rabbi at Congregation Beth Simchat Torah, Manhattan’s LGBTQ synagogue, “is that a contemporary Jewish wedding should be a wedding between two individuals.” In other words, the basis for her ceremony is equality between the betrothed, gay or straight.

Cohen, who first drafted a ceremony for her lesbian sister, maintains the broad structure of Conservative rites, but alters the liturgical language to square with contemporary mores. The wedding takes place under a chuppah and includes the first blessing over the wine. For the second blessing, she thanks God for sanctifying human sexuality. “Blessed are You, our God, Source of Life, who frees us from fear and shame and opens us to the holiness of our bodies and their pleasures,” she says.

In traditional weddings, a man gives a woman a ring. Like many Conservative rabbis, Cohen makes this portion of the service a reciprocal ring exchange. But she does not change the liturgy. “For people who are familiar with the traditional Jewish wedding, this is one of the pieces that feels most authentic.”

Cohen reads the ketubah and then recites the seven blessings, changing the wording about a bride and a groom to refer to same-sex individuals. The fifth blessing, which describes a barren city now filled with children, troubles Cohen in its implication that a couple would be happy only if they procreate. Instead, Cohen changes the language to rejoice in the “uprooting of senseless hatred” from the earth.

“I think it is about the couple repairing the world through a commitment to perpetuating the next generation,” she said. “I don’t think it has to be about them actually raising their own children.” 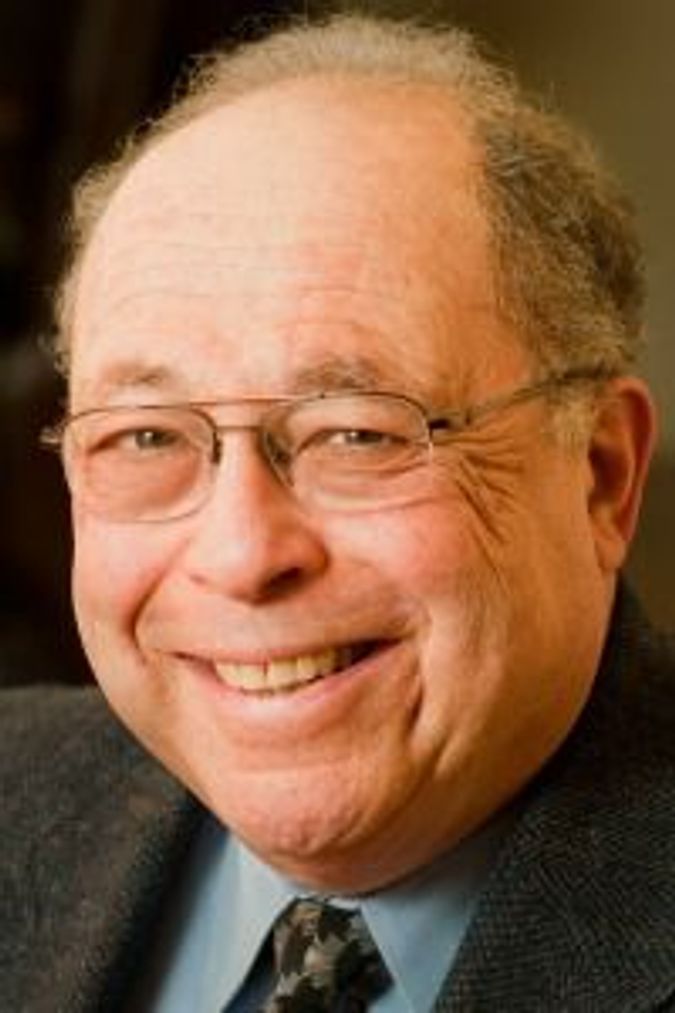 Rabbi Stuart Kelman, now retired from Congregation Netivot Shalom, formulated a ceremony that parallels, but does not replicate, a Jewish heterosexual wedding. “I wanted to develop something that is equal in function to the traditional ceremony,” he said. “You can easily change the words so long as the words do the same thing as the original.”

At the time he drafted his ceremony, Kelman said, gay marriage was such a new phenomenon that “I felt that it needed a name to distinguish it from a heterosexual union.” But he points out that today the practice is commonplace.

Kelman’s model is not a wedding but a Brit Reyut, or “covenant of love.” His ceremony utilizes a new terminology. Instead of a chuppah, the couple marries beneath a sukkah. The ring ceremony is a chalifin, the Hebrew term for exchange. Kelman utilizes a shtar, or a deed, in place of a ketubah.

The service begins with the blessing over the wine. But in place of the prohibition on sexual activity, Kelman substitutes the shehecheyanu, a prayer for special occasions.

And both partners break glasses.