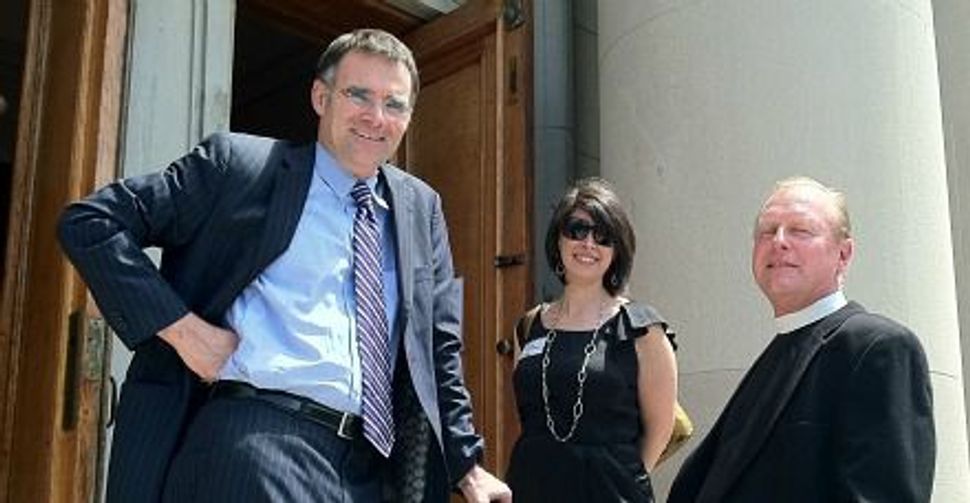 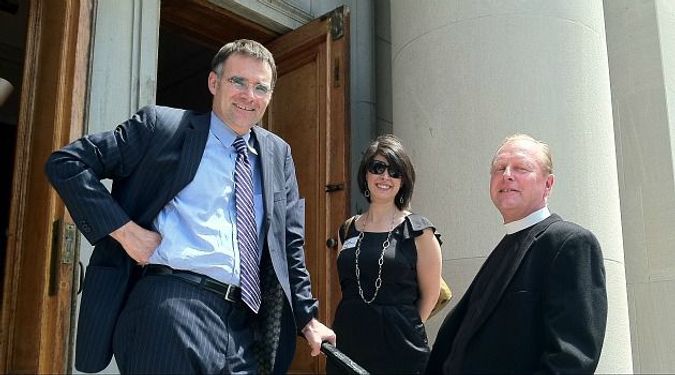 Two collapsed ceilings led to one big mitzvah for a Brooklyn synagogue and a neighboring church.

After its roof collapsed in 2009, Congregation Beth Elohim, located in Park Slope, temporarily moved its services to the Old First Reformed Church, down the block. Two years later, Rabbi Andy Bachman was nearly struck by chunks of plaster as he prepared for High Holy Day services inside the church.

The double-debris drama could have led to friction between two less-committed congregations. Instead, it inspired the synagogue to donate $15,000 to the church to help fund repairs, after winning a $250,000 renovation grant last week.

“We know what an awful time it is to be looking at a sacred space and know it can’t be used,” said Cindy Greenberg, CBE’s program director. “This is a wonderful opportunity for us to start them on their journey.”

Despite the close bond between the two institutions and his personal friendship with Bachman, the Rev. Daniel Meeter of the Old First Reformed Church said he was stunned by the donation.

“This gift of money was a complete shock to us,” Meeter said.

The church and the synagogue have had an informal relationship for decades and have conducted joint Bible studies for nearly a century. They founded the Park Slope Coalition for the Homeless and operate a shelter together. Since 2001, Meeter has attended High Holy Day services at CBE.

Three years ago, calamity struck when the synagogue, which is located on Garfield Place, lost part of its ceiling when it caved it days before the Yom Kippur service. After hearing about the devastation, Meeter invited Bachman to lead his 1,000-member congregation in Yom Kippur services in the church sanctuary.

“It was the beginning of a beautiful relationship between Reverend Meeter and Rabbi Bachman, as well as between our two communities,” Greenberg said.

Meeter called it “a no-brainer” to offer a hand to the Jewish congregation.

“We’re Dutch Calvinists, so we don’t have a cross or saints in the sanctuary,” he said. “We’ve got the Ten Commandments up on the wall behind the pulpit. It seemed like a fitting sacred space.”

For the next two years, the Old First Reformed Church hosted CBE’s High Holy Day services in its sanctuary.

In a strange twist of fate, 15 minutes before CBE’s Rosh Hashanah service was set to begin inside the church last September, large clumps of plaster fell from the ceiling.

No one was harmed, and the service in the sanctuary went on as planned. It did, however, lead to some jokes about the ceiling woes following the synagogue to one location from another.

“It was the cause of much humor,” Meeter said. “Everyone [from Beth Elohim was] saying: ‘Is it us? Is it us?’”

The church brought in an engineering team, which deemed the entire room to be unsafe. Bachman’s 2011 Rosh Hashanah service was the last event held in the sanctuary.

While its congregation is small enough to fit in its Sunday school hall for regular services, the church has used the repaired sanctuary of CBE for its past two Christmas and Easter events.

The church’s hopes of fixing the roof anytime looked dim, until CBE scored its giant grant win. The synagogue came in second in a social media contest sponsored by American Express and the National Trust for Historic Preservation.

A tireless month of strategic social media advertising rallied popular support, and CBE won 8% of all votes cast, beating out such prominent New York landmarks as the Solomon R. Guggenheim Museum and the High Line park.

“It really speaks to how invested the community is in helping us repair our space,” Greenberg said. “Not just our Jewish members, but the whole Park Slope community.”