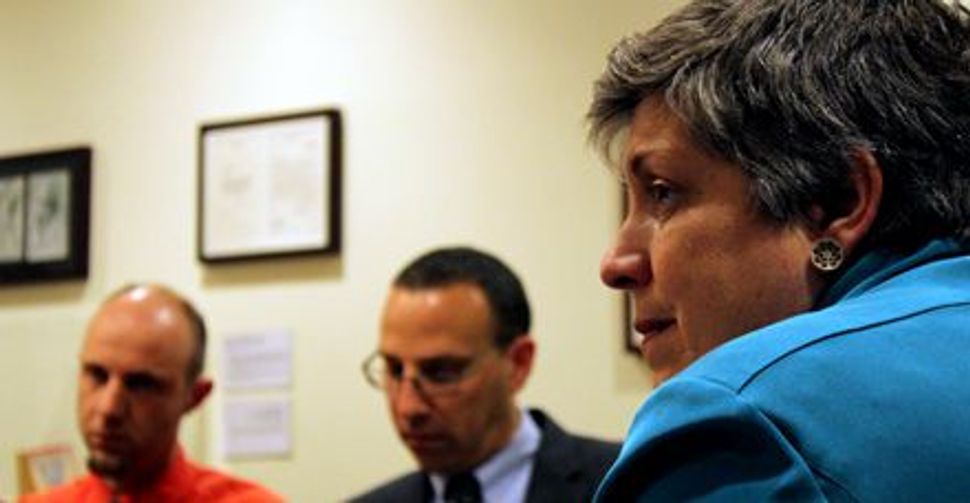 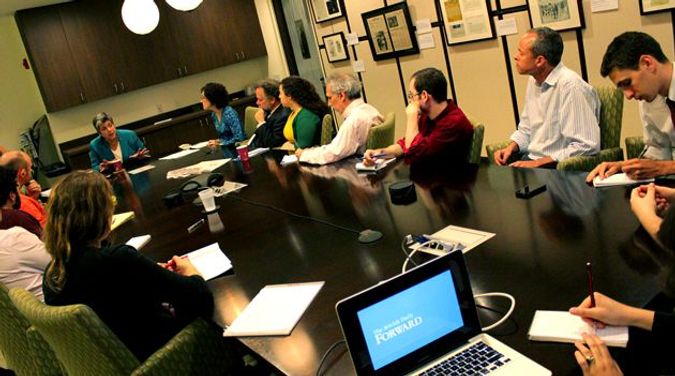 Jews face special risks that require vigilance, though there is no “specific, credible threat” against Jewish targets, Janet Napolitano, secretary of the Department of Homeland Security, told the Forward during a visit to the newspaper’s New York offices.

In a June 4 meeting with the paper’s editorial staff, Napolitano cited the particular exposure she said Jews face in explanation of a DHS security grant program that mostly benefits Jewish groups.

“Unfortunately there are risks attendant on the Jewish community that are not attendant on all other communities,” she said.

Listen to an interview with Napolitano by Forward editor Jane Eisner and Washington correspondent Nathan Guttman:

A Forward report found that the program for DHS security grants for not-for-profit organizations was tailored to the Jewish community and that almost three-quarters of its funds went to Jewish institutions.

“The fact that it ends up going to many Jewish organizations doesn’t in itself bother me,” Napolitano said. She added that she had seen no evidence that the money was misspent, and that she believes the grant program has been successful.

Tension levels within the Jewish community, Napolitano said, hit a peak this past winter, following intensified rhetoric between Israel and Iran, and the indictment of an Iranian American in Texas for his role in an alleged plot by an Iranian official to bomb the Washington embassies of Israel and Saudi Arabia. These concerns prompted Napolitano to hold a conference call with 200 Jewish communal leaders last February, in which she discussed the threats and the actions taken to ensure the community’s safety.

During her tenure at DHS, Napolitano added, threats to the Jewish community came from foreign entities, from homegrown extremists and from “hate crime type of activity.”

On another topic, Napolitano said that the DHS has decided to allow Israeli citizens to enter the United States via a special fast-track program despite Israel’s decision not to grant Americans reciprocal consideration, as the United States usually requires.

Israel’s inclusion in the Global Entry program allows frequent visitors to the United States to complete a questionnaire about their backgrounds and thereafter enter the country by simply scanning their passports. Napolitano announced the decision to include Israeli citizens in the program during a May 20 visit to Israel. A reciprocity requirement that has been applied to all other countries seeking to join the program was waived in the case of Israel.

“We have a special friendship with Israel,” Napolitano explained. “President Obama is very committed to that relationship, and we are looking for ways to express that commitment within the portfolio of tasks that the Department of Homeland Security performs.”

At the same time, Napolitano was noncommittal when asked about a push by some members of Congress and the Israeli government to allow Israeli citizens to enter the United States without tourist visas at all, as is currently permitted for citizens of some European countries. The administration, she noted, has not yet expressed its view on this proposal.

During her recent visit to Israel, Napolitano discussed with Israeli officials the issue of securing borders while preserving the rights of refugees entering the country. Israel has been dealing recently with a wave of anti-immigrant sentiment aimed at African migrants seeking refuge in Israel. Napolitano did not, however, provide Israel with advice on the issue and would not comment on the Israeli government’s treatment of the Africans trying to enter the country.

On the issue of screening procedures in airports, however, the DHS secretary did make clear that the United States would not follow Israel’s model. Israel is known for employing screening techniques that profile air travelers based on their origin, ethnicity or faith. Security checks conducted at Ben Gurion International Airport routinely require one-to-one interviews. Napolitano said that the huge difference in scale makes screening via personal interviews impractical in the United States, with its scores of international entry points. “It’s against the law here to profile,” Napolitano added.

“Israel has perfected a system that works very well there,” Napolitano said. “They do a terrific job. But it’s not a system we can just transport 100% to the U.S. It won’t fit.”

Napolitano also pointedly declined to criticize New York City’s controversial program of surveillance of Muslim organizations and individuals with no known or suspected ties to terrorism. She said New York remains a potential terror target and that she was not going to “second-guess” any local police department or the program, which civil liberties groups believe amounts to illegal domestic spying.