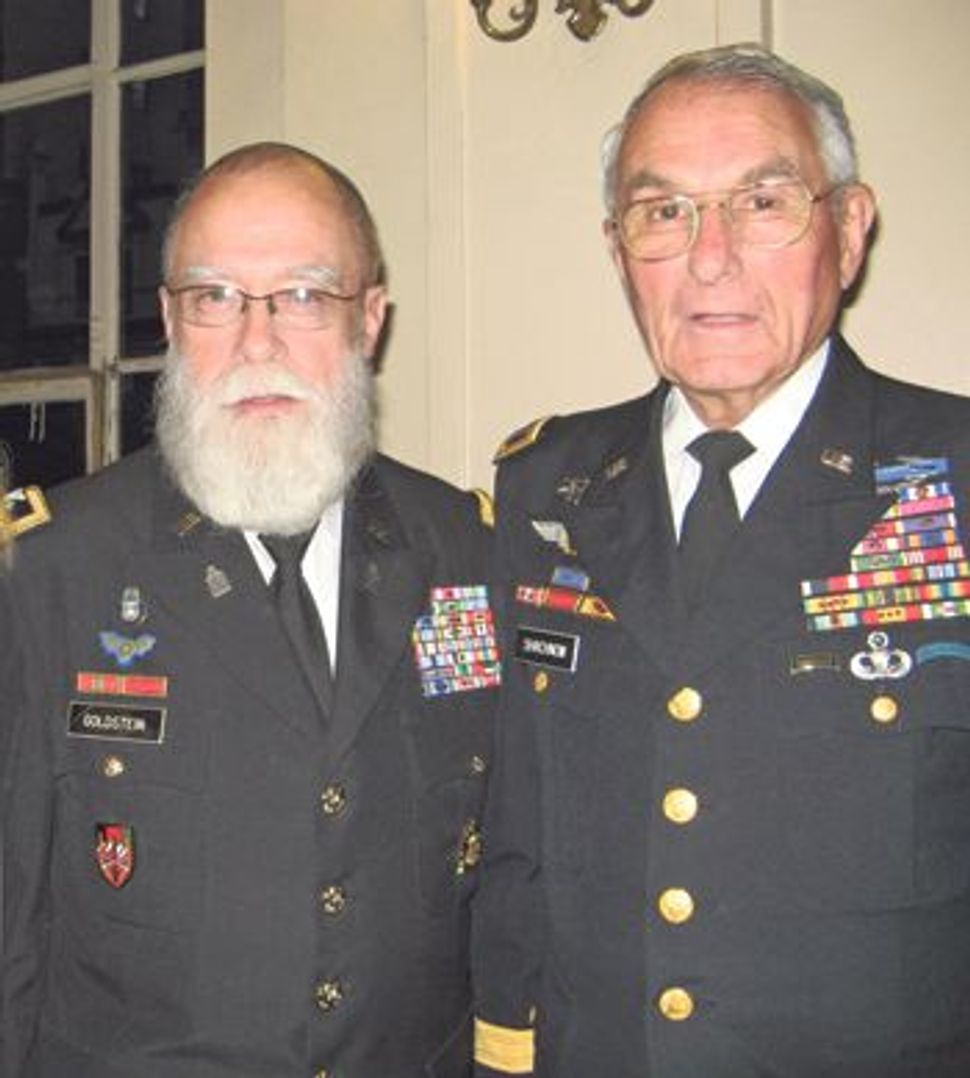 Jacob Goldstein, colonel and Army Reserve chaplain, introduced the keynote speaker,Sidney Shachnow, a retired major general of the U.S. Army and a former commanding general of U.S. Army Special Forces Command, at the Jewish Community Memorial Day Event, held at The Jewish Center, on Manhattan’s Upper West Side, on May 23. Wearing a camouflage yarmulke given to him by Goldstein, the general said: “As a Holocaust survivor, I am forever grateful to the World War II generation for their courage and sacrifices. The GI became a liberator. I, consequently, a survivor. I was born in Lithuania. Within the first 30 days of the German occupation of its capital, Kovno, or Kaunas, 10,000 Jews were murdered. The irony is that they were not murdered by the Germans but by neighbors, friends and fellow Lithuanians. Lithuania had the highest killing rate of all Nazi-occupied areas: 96%! Of Kovno’s 160,000 citizens, a quarter were Jews. Of the original 40,000 Jews, only 2,000 of us survived. I could not wait to get out of Lithuania fast enough!” As a child, Shachnow spent three years imprisoned by the Germans.

In 1959, Shachnow immigrated to the United States. He recalled: “I’d never been to school. Education, assimilation, integration, language, customs, work ethic were all challenging experiences. I met my wife in high school and decided that this was the woman I wanted to spend the rest of my life with. We’re doing pretty good 55 years later. [Our family] exceeds 30 people. We have four daughters, all married; 14 grandchildren, and five great-grandchildren. We have two generals — of course, I’m the senior general — three colonels, a captain who just graduated from a Special Forces qualifications course, a young lieutenant and a grandson [about to] deploy to Afghanistan. And we have two doctors. Always got to have a doctor.”

The general, who served in Vietnam as a Green Beret commander, said: “In 1989 I was reassigned to Berlin as the commanding general. It was the ultimate in nemesis retribution.” He explained that in Berlin he lived in a 32-room villa that once belonged to Fritz Reinhardt, finance minister of the Third Reich, and that his military headquarters was situated in what had been the Lufwafffe headquarters of Hermann Goering. Shachnow concluded: “Those that we honor today made the ultimate sacrifice for our country. Their deaths allow each of us to exercise the inalienable right to life, liberty and the pursuit of happiness.” Shachnow was quick to add that we’re not guaranteed the “right” to happiness. Quoting George Orwell, he said, “People sleep peaceably in their beds at night only because rough men stand ready to do violence on their behalf.”

Goldstein said: “Though I have a gray beard, I am not a retiree. I am still in uniform and Command Chaplain 1st Mission Support Command, Ft. Buchanan, in Puerto Rico. When I first met General Shachnow in 1985 he was the commander of the Berlin Brigade. He said to me, ‘Can you imagine, I am now safeguarding Germans, the same people who tried to kill me and killed my family?’” Of the general’s many medals, Goldstein highlighted the Master Parachutist Badge, which has jump wings and decorations indicating that Shachnow has made 3,000 jumps. His other honors include the Distinguished Service Medal with the oak leaf cluster, the Purple Heart with the oak leaf cluster, the Silver Star with the oak leaf cluster, The Legion of Merit and the Bronze Star.

Cantor Chaim David Berson of The Jewish Center sang America’s national anthem, and The Jewish Center’s associate rabbi, Yosie Levine, delivered an invocation. Philanthropist Joshua Landes, a supporter of the event, lit a candle “in honor of the hundreds of thousands of American Jews who have served in the armed forces of the United States of America and the tens of thousands of American Jews who have died fighting for their country.” Rabbi Steven Rein, assistant rabbi at Park Avenue Synagogue and a reserve chaplain in the U.S. Air Force, recited a prayer for the welfare of the armed forces in Hebrew and in English. The Memorial event was presented by The Council of Young Jewish Presidents and The Jewish Relations Council of New York.

In the show, which was conceived and produced by Peter Gethers and Daniel Okrent, what were once simple jokes — I refuse to divulge any — have been transformed into vaudevillian, often racy skits. As for scenery, what’s more Jewish than a giant matzo backdrop?

In the audience, husband-wife actors Jill Eikenberry and Michael Tucker (who entertained at “Looking Forward,” the Forward’s March 8, 2011, fundraising gala) nearly fell out of their seats with laughter. A suggestion: Before settling in for the show, which plays with no intermission, head for the restroom first, so that you will be able to roar without restraint.”

The UJA-Federation of New York Philanthropy’s “Women of Influence” May 31 luncheon honored Alexandra Lebenthal, president and CEO of Lebenthal & Company and of Alexandra & James, its multi-family office; Samantha Yanks, editor-in-chief of Gotham and Hamptons magazines, and philanthropist Elyse Newhouse. “Go girls!” said host Stacey London, co-host of TLC’s “What Not To Wear” and co-founder and stylist-in-chief of the network “Style for Hire.” She surveyed the 300 fashionable women assembled at Guastavino’s and proclaimed, “No one is getting ambushed today!” Among the few men in the crowd were UJA-Federation President Jerry Levin and Executive Vice President and CEO John Ruskay.

Rosanna Scotto, co-anchor for Fox 5’s “Good Day New York,” led a panel discussion with the three accomplished honorees. She asked whether they saw themselves as good or guilty mothers. Lebenthal fired back: “When you think you are a terrible mother, [your children] don’t know. You are the only mother they have.” She commented on the lack of women in senior finance positions and on the fact that although twice as many women as men start businesses, women have more difficulty raising startup money. Lebenthal added, “My grandmother, a co-founder of our firm in 1925, is now 93 and still an inspiration.” Yanks said, “Even though I am a Jewish woman, I don’t feel guilt.” Newhouse weighed in: “People who judge you can’t control your kids. They have their own helicopter lives.”