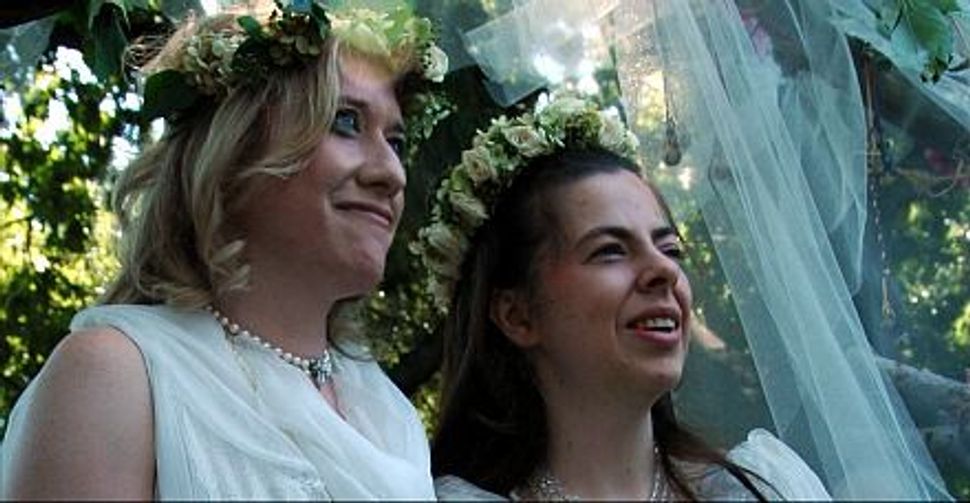 Image by courtesy of jill hammer

In their recent crafting of gay and lesbian marital rites, three Conservative rabbis altered the most fundamental piece of the traditional Jewish marriage ceremony: the liturgy of kiddushin. 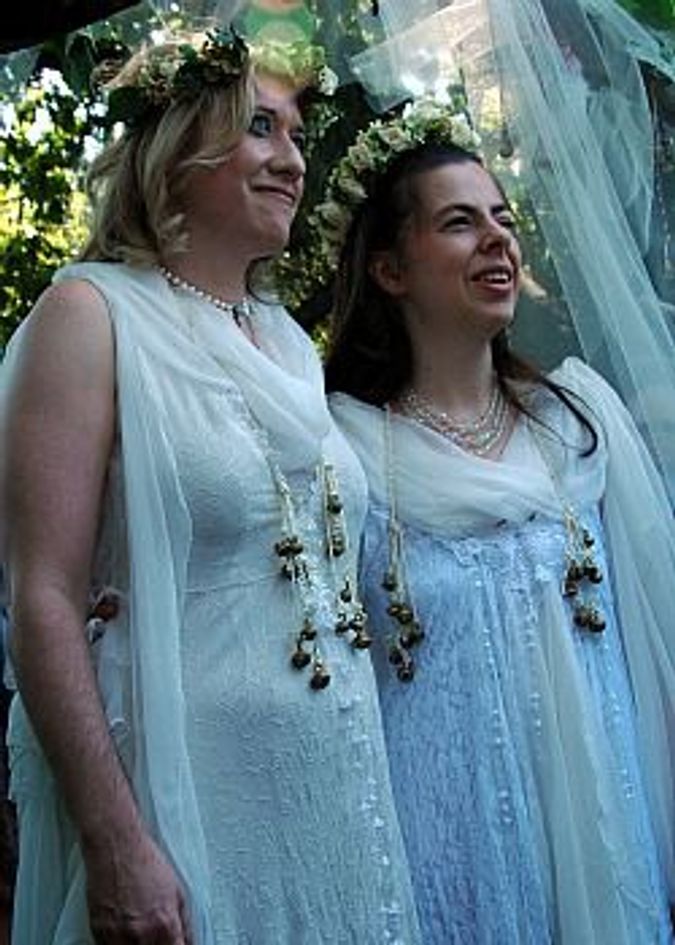 Happily Married: Rabbi Jill Hammer, right, with her wife, Shoshana Jedwab, at their wedding.: Image by courtesy of jill hammer

But rather than feel excluded, some gay Jews say they are relieved to be exempt from kiddushin, the part of the ceremony in which one partner — in heterosexual marriages, the man — literally acquires the other. The rite of kiddushin has long bedeviled heterosexual couples that seek a traditional ceremony free of sexist language.

“There are many good reasons why a same-sex couple should not use kiddushin,” said Forward contributing editor Jay Michaelson, founder of the Lesbian, Gay, Bisexual and Transgender Jewish group Nehirim.

The trio of Conservative rabbis — Daniel Nevins, Elliot Dorff and Avram Reisner — released marriage and divorce templates May 31 at a meeting of the Committee on Jewish Law and Standards of the Conservative movement’s Rabbinical Assembly. The committee unanimously approved the templates, which provide guidance for Conservative rabbis on how to conduct same-sex marriages.

“We realized that our conviction does not settle the matter of egalitarian heterosexual marriage ceremonies for some rabbis and couples…” the document states. “Because for gay couples there is no established wedding liturgy, we have used this opportunity to create a new ritual that uses the egalitarian language of partnership from the outset.”

Two marriage guidelines were issued: One hews closely to traditional rites; the other is more inventive. The first ceremony looks nearly identical to a heterosexual marriage, with the main difference being the exclusion of kiddushin.

“For me, it is the best of both worlds,” said Michaelson, who opted not to use kiddushin at his own wedding. “What really matters is less the detail, which very few people will understand anyway, and much more the form. There is a chuppah and a glass and rings. It looks and feels like a traditional Jewish wedding.”

The three rabbis substituted another legally binding contract for kiddushin in their ceremony, one that creates a partnership between the betrothed. According to Nevins, the precedent for this type of union occurs in the Torah as a business partnership.

In substituting kiddushin with partnership law, the rabbis borrowed from the Brit Ahuvim, or Lovers’ Covenant, created by Reform rabbi Rachel Adler.

“What it does basically is to move marriage out of property law and into partnership law,” Adler said. The rite “has been used by both gay people and heterosexual people from its inception.”

Kiddushin’s description of a man acquiring a woman has been a source of consternation for rabbis and heterosexual couples. But rather than create new guidelines for heterosexual couples, Conservative rabbis have sought to mitigate kiddushin by adding to the wedding ceremony. For instance, most Conservative rabbis oversee ceremonies with a ring exchange, allowing the woman to give her husband a ring; the man, meanwhile, “acquires” her by giving her a ring.

As Nevins shared his same-sex marriage guidelines with Conservative congregations, he said that several people asked him whether the Conservative movement would adjust the hierarchical structure in the traditional heterosexual marriage. Nevins said that the R.A.’s Committee on Jewish Law and Standards might take up heterosexual rites at a later date. Conservative rabbis have been grappling with this question for decades, he observed, adding that some heterosexual couples might also be interested in using the gay rites as an egalitarian model.

In additional to the traditional marriage ceremony with the chuppah and the rings, the rabbis put forward a second, experimental ceremony with a tallit and three blessings.

This ceremony does not take place under a chuppah. Instead, the couple are wrapped in a large tallit, a symbol of the divine presence.

“The image of this is like a mother bird sheltering her chicks under her wings,” said Nevins.

The experimental ceremony does include several traditional elements; rings are exchanged and a glass is broken under foot. Rather than seven blessings at the end of the ceremony, there are three.