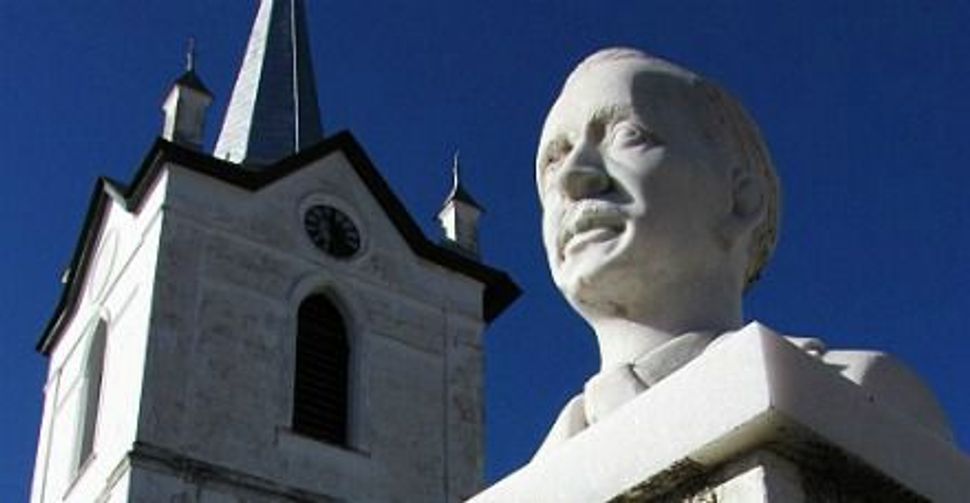 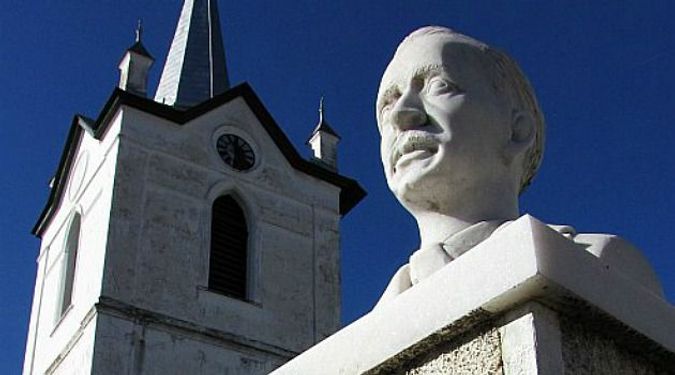 Hungary for Answers: Nazi collaborator Jozsef Nyiro was a member of the fascist Arrow Cross movement. Why does the Hungarian government want to bury his ashes in neighboring Romania? Image by gombabandi/wikimedia commons

In the scenic and enchanting lands of Transylvania, the ashes of a dead fascist have sparked a diplomatic incident.

On May 27, the remains of Hungarian writer and politician Jozsef Nyiro were supposed to be reburied in the Romanian town of Odorheiu Secuiesc. The village is today heavily populated with Hungarians, as it was part of Hungary during the Austro-Hungarian Empire and then briefly again during World War II. The train carrying Nyiro’s ashes, called the Blessed Lady Pilgrimage, was to be followed by a regiment of Hungarian cavalry dressed in ceremonial Hussar regalia, and the speaker of the Hungarian Parliament was planning to address a large crowd at the ceremony.

But the extensive plans, undertaken at the expense of the cash-strapped Hungarian government, came to naught when Romania refused entry to the train car carrying Nyiro’s urn. Prior to announcing it would not allow Nyiro’s ashes to enter its territory, the Romanian Foreign Ministry requested a meeting with the Hungarian ambassador to voice its objection. The Hungarian government protested in turn, stating that it considered the reburial of Nyiro – whose works it had just added to the national school curriculums — a “cultural event.” Meanwhile, the Speaker of the Hungarian parliament denounced Romania’s decision as “unfriendly, uncivilised and barbaric.”

But Romania had good reason not to want Nyiro reburied in its ground. That’s because the man was a supporter of Hungary’s wartime Arrow Cross, the group of pro-Nazi thugs who sought the reconquest of lands (including Transylvania) excised from Hungary after World War I. Bucharest has decried its neighbor’s ”promoting a person that, according to all international assessments, conducted far-right, anti-Semitic activities.” That Hungary sees fit to expend state resources venerating a fascist who has been dead for six decades is but the latest sign of the disturbing turn the country has taken under Prime Minister Viktor Orban and his Fidesz Party.

After Nazi Germany allowed Hungary to annex Northern Transylvania in 1940 as part of the Second Vienna Award, Nyiro joined the Hungarian parliament as a member of the extreme right wing, anti-Semitic Transylvanian Party. In a 1942 speech, he referred to Jews as “well-poisoners” who “destroy the Hungarian soul, who infect our spirit,” and declared that “This concept of the rundown liberal Jewish tradition, this veiled propaganda, must disappear from Hungarian life.” That year, his party proposed a ban on Jews using railway sleeping cars.

In October, 1944, after learning that Hungary’s then-Regent Miklos Horthy was secretly negotiating with the Allies, the Nazis backed a coup by the Arrow Cross to seize control of Hungary and keep it on the side of the Axis. Once installed in power, Arrow Cross members immediately went about massacring over 10,000 Jews in Budapest. Throughout this period, Nyiro, editor of a creepily named, right wing publication “Hungarian Might,” remained in the puppet parliament. Following Germany’s surrender, and wanted for war crimes charges by Romania and Hungary, he fled to West Germany and died in Franco’s Spain, one of several Hungarian Arrow Cross supporters to find exile in the Hispanosphere alongside their German Nazi brethren.

Ironically, Nyiro’s planned reburial coincided with that of another European fascist sympathizer, Juozas Ambrazevicius-Brazaitis, who briefly served as puppet prime minister in Nazi-occupied Lithuania. Brazaitis’ remains in the United States were recently exhumed and reinterred, with full state honors, in Lithuania last month. And the glorification of Nyiro is part of a broader trend within Hungary itself, where the out-and-out fascist Jobbik party is the country’s third largest. Fidesz, the ruling party of Prime Minister Orban, cynically uses Jobbik’s popularity to insulate itself from criticism, claiming that not only are its respectable center-right policies the best way to weaken the far right, but that international criticism of Hungary (by which it means Fidesz) only gives succor to extremists. (Aside from the disgrace of honoring an anti-Semite, the reburial controversy has exacerbated long-simmering tensions between Hungary and Romania, relations that have worsened since Orban’s government came to power and announced that it would distribute Hungarian passports to any ethnic Hungarian living in a neighboring country who wanted one).

“If there’s any kind of insurance against any kind of extremism,” Zoltan Kovacs, the government’s communications minister told me in a February interview in Budapest, “it is this government.” This point has been echoed repeatedly by Fidesz and its supporters, including Hungary’s ambassador to the United States, who recently wrote a letter to the Washington Post complaining that, “Presenting a make-believe picture of Hungarian reality benefits no one but the extreme right-wing party Jobbik.” Not only, in this opportunistic telling, does Fidesz serve as the bulwark protecting liberal democracy, but even well-intentioned criticism of Hungary has the opposite effect by emboldening fascists.

This critique would have merit if Fidesz did more to combat the ideas of the far right, rather than mimicking their rhetoric and venerating their heroes, as it is doing not only now with Nyiro but, more importantly, with a rehabilitation of Horthy. “Right wing intellectuals could have said, ‘this we don’t say, this we don’t do, this way we don’t’ behave,’” Endre Bojtar, editor of the liberal magazine Magyar Narancs, told me earlier this year. “So they could have created a kind firewall between the extreme right and the center right. What they did instead is they appropriated a lot of their issues, a lot of their language.” They have also appropriated Jobbik’s behavior. Last week, the Hungarian Culture Minister announced that Nyrio’s ashes had been smuggled into Romania, a move that prompted the Romanian Prime Minister to demand an apology from his counterpart. Orban has refused.

On the day Nyiro was meant to be buried, the speaker of the Hungarian Parliament traveled to Romania and told a crowd of ethnic Hungarians that, in appreciating the man’s legacy, his politics ought to be separated from his writing. This is at least a tacit concession on the part of the Hungarian government that Nyiro’s politics were disreputable. How to appreciate a writer with authoritarian political sympathies is a perennial question. Ezra Pound was a fascist. Gabriel Garcia Marquez is the court novelist of Fidel Castro. That doesn’t mean they were incapable of producing great literature and shouldn’t be recognized for it. Yet rare is the writer who becomes a man of action, and it is this facet of Jozsef Nyiro’s story that makes it harder to distinguish his middling literary work from his obscene political views. The more relevant question is why the Hungarian government finds it so important to do so.

James Kirchick, a fellow with the Foundation for Defense of Democracies, is a contributing editor for The New Republic and World Affairs Journal.