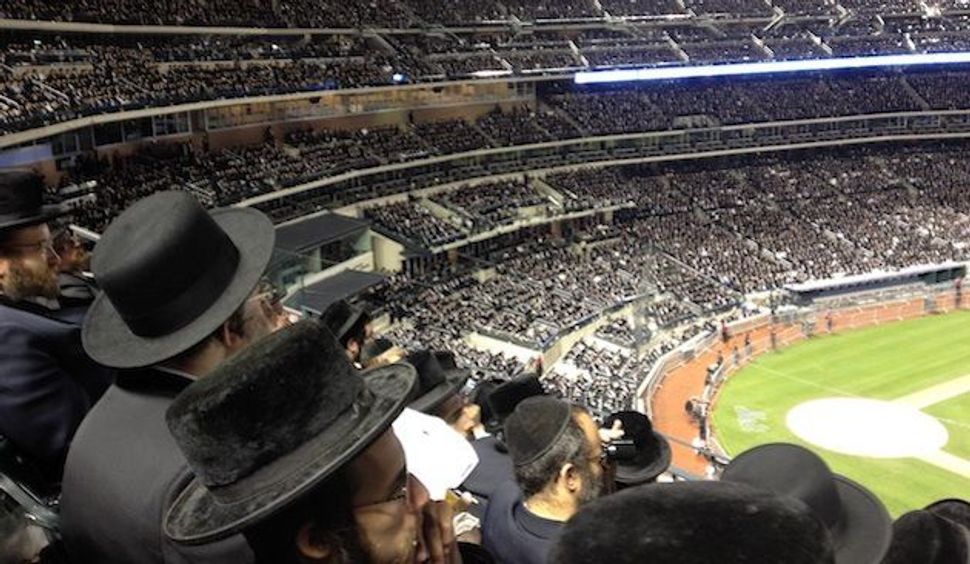 Mixed Messages: Smart phones and laptops were everywhere as black-hatted Hasidic men rushed to a rally where leaders denounced the corrupting power of the internet. Image by josh nathan-kazis

It’s not too late to save Michael Fromowitz.

Fromowitz, 18, and a pack of his yeshiva classmates had come to the ultra-Orthodox anti-Internet rally at Citi Field in Queens from the Hasidic enclave of New Square in upstate New York. A redhead with long side curls, Fromowitz doesn’t have his own email address. He does have a cell phone, but it’s a so-called “kosher phone,” so it doesn’t take pictures or send text messages.

For Hasids even a few years older, that sort of distance from the web is rare. So it is yeshiva students like Fromowitz who are not yet a lost cause, according to one rally speaker, Rabbi Ephraim Wachsman.

“You can see it in the ebbing eyes of the younger generation, in the jittery inattentiveness of our children… and the unbelievable breaches of [modesty],” Wachsman said, his image projected on the stadium’s JumboTron as 40,000 ultra-Orthodox Jewish men looked on.

For the older generation, it may already be too late. At the stadium, and en route to and from the rally, BlackBerrys and iPhones were everywhere. On a Brooklyn subway platform, men heading to the event discussed directions they had read on the transit website HopStop. Days later, videos of the rally were all over YouTube.

So much for being cut off from the Internet.

The evening had some trappings of a regular night at the ballpark. Roving cameras put cute kids in the stands up on the JumboTron. Lines for the men’s room were long. Airplanes taking off from La Guardia Airport periodically drowned out all other sounds.

Still, many of the men and boys in attendance had never been to a ball field. Some said they didn’t even know how baseball was played. They weren’t going to learn the game that night. The Mets were in Pittsburgh, and the baseball field was empty. Meanwhile, twin billboards advertising Cholula Hot Sauce flanking the Citi Field JumboTron were covered with white plastic to hide thedrawing of a demurely clad woman pictured on the Cholula bottles.

I interviewed Fromowitz and his classmates in the right field nosebleed seats. Reporters had been barred from the event — a representative preposterously blamed “Homeland Security” — so I paid $20 for my ticket in the parking lot from a member of the Skver sect who had an extra. This meant that I was sitting in a section full of Skver Hasids, many of them from New Square. (One New Square man told me that his wife had said that there were no men left in the town.)

I found it impossible to talk to only one or two Hasids at a time. As I interviewed the Skver Hasids in the bleachers, the crowds around me grew. At one point, a middle-aged man pulled me from a group of younger Hasids, hoping to have a quiet word, boxing out a preteen on the way.

On the G train home, I was swarmed again by the mostly Satmar Hasidic crowd headed for the Williamsburg. I asked one of the men next to me what he had thought of the rally. He referred me to a Satmar across the aisle, and soon half the subway car had formed a circle around us.

But getting any of their names was difficult. This had been a problem the entire day. On the way to Citi Field, a young Bobov Hasid traveling with his father and brother told me his name was Ben Zion Halberstam. I wrote it down, then noticed everyone was laughing. He had given me the name of a Bobov rebbe.

With the Satmar Hasids on the subway after the rally, we got to talking about Zionism. A rally speaker named Rabbi Yechiel Meir Katz had drawn an implicit parallel between the 19th-century rejection of Zionism by the ultra-Orthodox and the need to reject the Internet. “Everyone who has a Jewish heart knows Zionism is against Judaism,” one man said when I asked about Katz’s comparison. Others told him to be quiet, perhaps understanding better how the quote would sound in a non-Orthodox Jewish newspaper.

The sentiment isn’t rare among the Satmar, who remain among the most anti-Zionist of the ultra-Orthodox groups. It was unusual for me to get close enough to the insular, Yiddish-speaking Hasids to see the fault lines between their sects, which can blend together from a distance. The Skver Hasids in my section seemed uncomfortable with Katz’s invocation of Zionism as a great threat to the Jews. The Bobov Hasids on the subway showed me how to tell their hats from the very similar style of hat worn by the Satmar Hasids. And the Satmar Hasids, by and large, seemed to be the least comfortable speaking English.

Though organizers had described the event as promoting the use of Web filters to make the Internet acceptable for those ultra-Orthodox Jews who needed it for work, some speakers took a harder line. Rabbi Don Segal, who cried while addressing the crowd, told a story about an Israeli ultra-Orthodox man who had been forced to use the Web to make a living. The man “became completely spoiled,” Segal related. “This device destroyed his Yiddishkeit,” or his Jewishness.

In a gesture that underlined the event’s significance in the eyes of its organizers, a rabbi led the huge crowd in the Sh’ma prayer in the manner in which it is sung at the close of Yom Kippur, with the second line, read silently on other days, chanted out loud. The prayer’s words, sung 1,000 different ways, droned through the stadium like a decades-old modem struggling to connect.