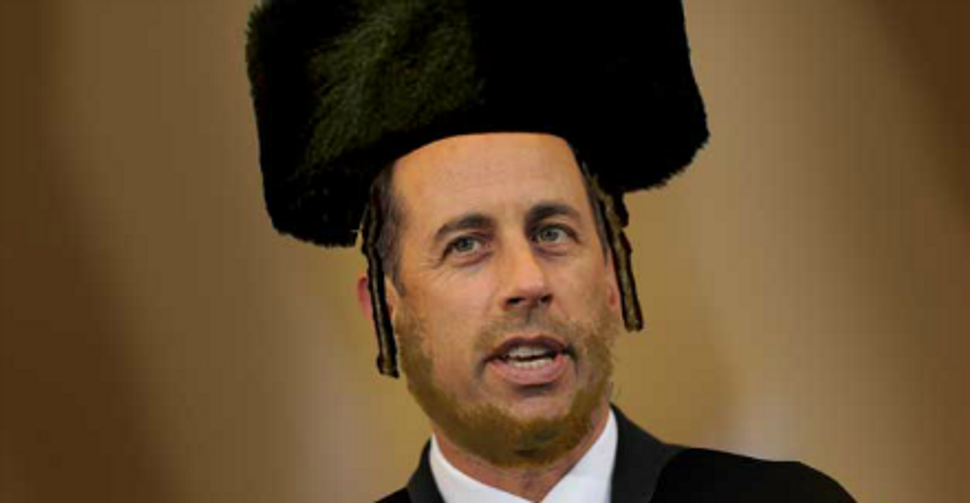 In 2012, the average New York Jew looks a little less like Jerry Seinfeld and a little more like Tevye the Milkman.

New York’s Jews are poorer, less educated and more religious than they were 10 years ago, according to a landmark new study of the city’s Jewish population.

They’re also less liberal: More than half of the Jews in New York City live in Orthodox or Russian-speaking homes, both of which lean heavily conservative.

The study, conducted by UJA-Federation of New York, counted 1.5 million Jews in New York City, Long Island and Westchester, up from 1.4 million just 10 years ago. That growth is almost entirely due to a huge surge in New York’s Orthodox population, which rose by more than 100,000 people over the past decade.

The numbers point to a seismic shift in what it means to be a New York Jew as Manhattan’s Jewish population shrinks and Brooklyn’s explodes, and as people disaffiliate from the more liberal Jewish denominations. 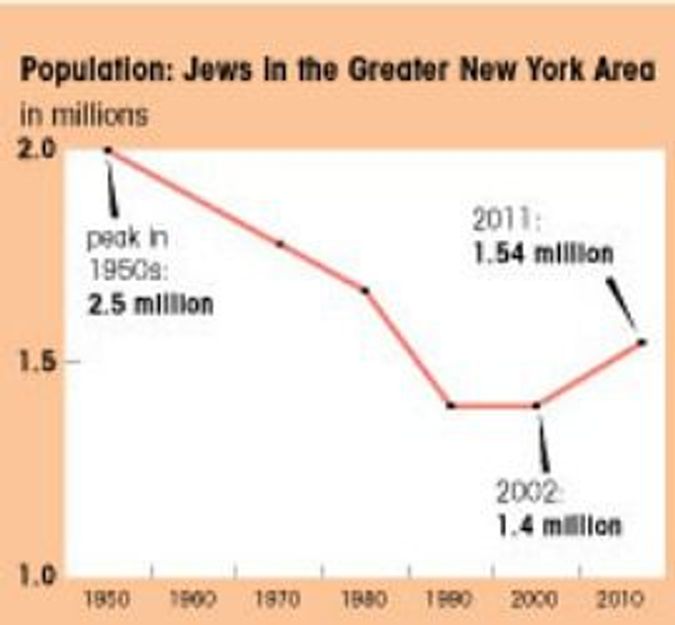 In the five boroughs of New York City itself, 40% of Jews currently identify as Orthodox.

The fast-shifting figures promise looming changes in how Jewish political power is wielded in New York, and in the relative influence of the city’s long-standing non-Orthodox institutions.

These trends are poised to accelerate. While one-third of New York-area Jews are Orthodox today, six out of 10 Jewish children in the New York area live in Orthodox homes. Hasidic children alone constitute 37% of the area’s Jewish children.

“We have a community that is large, that is growing, that is diverse and that is challenged by poverty, by elements of disengagement, and also strengthened by diversity, by growing areas of Jewish involvement,” said Steven M. Cohen, a leading sociologist of the Jewish community and one of the report’s three authors.

The $1.7 million study is the largest of its kind ever undertaken in the United States, according to its sponsors. Researchers conducted 6,000 telephone interviews with Jewish households, randomly selected using a variety of methods.

(This reporter’s mother sat on a 22-member advisory board that approved the design of the survey in the fall of 2010. She has had no involvement in the study over the past year and a half.)

The survey’s findings pose an array of major challenges to the city’s Jewish establishment. The survey found among New York Jews fast-rising levels of poverty that appear to be unparalleled in recent history. Researchers also found a steep drop in affiliation among non-Orthodox Jews, and low levels of support among Orthodox Jews for the institutions that the non-Orthodox have long dominated. The survey also identified demographic trends that could have consequences for how New York Jews’ political interests are defined.

The newfound dominance of those communities, both of which are more politically conservative than other Jewish groups, could challenge the notion that the New York Jewish vote is a liberal vote — or even a Democratic vote. 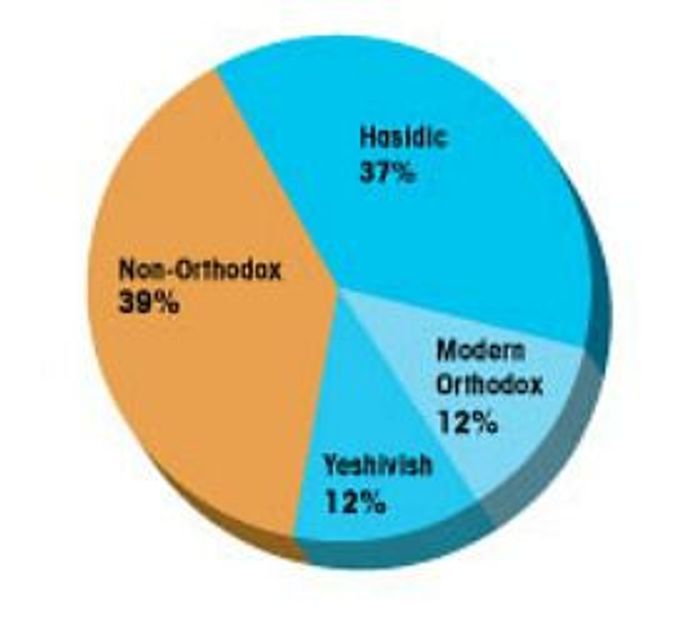 The locus of this new, right-leaning Jewish constituency is in Brooklyn, where Jews make up 23% of the population. Most of the area’s Russian-speaking Jews live there, as do nearly all of the area’s ultra-Orthodox Jews.

The community already flexed its political muscles once, in a high-profile special election to fill the seat of liberal Jewish Democratic Rep. Anthony Weiner, who resigned in June 2011. Republican candidate Bob Turner rode a wave of Russian Jewish support to take the seat, much to the surprise of the city’s Democratic establishment.

“The Jewish political field in Brooklyn has changed so much,” said Alec Brook-Krasny, a Russian-speaking Jew who is a member of the New York State Assembly. “The dynamics are that we’re going to have more and more Russian Jews participating in elections. Of course the influence will be increasing.”

Ultra-Orthodox Jews, meanwhile, have an acute need for social services and tend to vote in blocs. Today, this inclines them to support establishment Democrats who dominate New York City politics and can deliver these services. But in sharp contrast to non-Orthodox Jews, they also hold conservative positions on social issues such as same-sex marriage, and they strongly back public funding for parochial schools. This puts them close to the Republicans ideologically.

“I would think that wise politicians would look at this data and realize that they can no longer view the Jewish community as monolithic politically,” wrote Republican political consultant Lee Cowen in an email.

On a national level, the survey’s findings could have long-term implications for how American Jews support Israel.

Some Hasidic groups, like the Satmar of Brooklyn’s Williamsburg, remain theologically anti-Zionist. Only 56% of the Hasidim reported that they felt “very attached” to Israel. That’s a higher proportion than among non-Orthodox Jews, but far lower than among other Orthodox groups.

National pro-Israel lobbying groups, which are largely supported by Reform, Conservative and Modern Orthodox Jews, are in no foreseeable danger of losing their backing. But the ambivalence toward Israel among some of the ultra-Orthodox could have an impact as the burgeoning population of young Hasidim comes of age.

“Historically, the Hasidim have shied away from doing any lobbying on behalf of aid to Israel or helping Israel on political issues,” said Douglas Bloomfield, a former legislative director of the American Israel Public Affairs Committee who is today a syndicated columnist and consultant. “Even the Zionist Hasidim have been very reluctant to help garner votes when they were badly needed.”

While those figures represent a significant increase from just a decade ago, it’s not just the recession that is making New York Jews poorer. 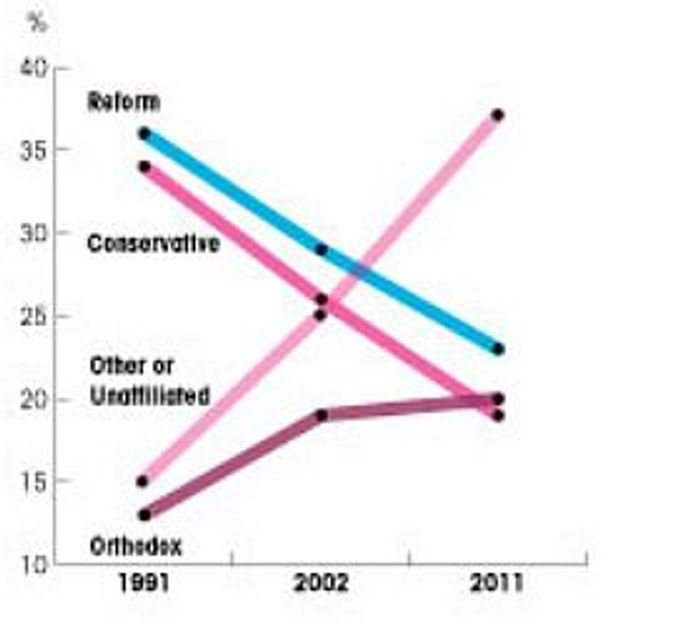 The rapid increase in the number of Hasidic families is pushing up the overall poverty level in a way that won’t rebound when the economy improves.

“There’s kind of a ceiling on what they can earn,” said William Rapfogel, CEO of the Metropolitan Council on Jewish Poverty, of the Hasidim, citing their generally low levels of English-language secular education and their large families. “The recession issue may impact their actual earnings, in the sense that if there were no recession, they would be making 15% more…. But it’s not the overriding issue.”

The authors of the survey report agree that the growth in the number of Hasidic families is the largest factor in the higher poverty rates, though not the only factor.

The report counts poor families as those with an income level at or below 150% of the federal poverty level, which correlates to $27,000 per year for a family of three. Under those terms, 43% of Hasidic households qualified as poor.

Financial distress is not limited to the ultra-Orthodox. Today, 7% of New York Jewish households report annual incomes of $250,000 or more, while 42% report incomes of less than $50,000. And 37% of households reported that they were “just managing” to make ends meet.

“Realizing that 361,000 people in my community are living in poor households, to me that was striking,” Cohen said.

“The Jewish community’s poverty level [is]… a little bit below the general community,” Ukeles said. “My sense is that over time, that gap has narrowed.”

Rapfogel said that the study confirmed what his organization has been seeing anecdotally in recent years. The Met Council’s kosher food pantry program, which served 8,000 households per month in 2008, now serves more than 15,000.

“This came as no surprise,” Rapfogel said of the results. “We see it where it’s happening.”

The decline has been discussed much in recent years. But the new figures show the drop in stark quantitative terms.

A combined 583,000 people identified as Conservative or Reform in this year’s study — 80,000 fewer people than a decade ago.

“These are not small changes from 2002,” Cohen said. “But we know they’re right, because they’re consistent with Conservative and Reform changes across the country.”

While the non-Orthodox denominations are shrinking, there’s a third category that is growing nearly as rapidly as the Orthodox. Termed “Other” in the survey’s charts, the group includes those who identified as Jewish but said that they are not members of any particular denomination, or that though they are Jewish, their religion is not Jewish.

“My initial understanding is that lots of children of the intermarried came of age, and their children are now adults,” Cohen said, by way of explaining the growth. “So there are many more children with mixed parentages. As a result, they identify as Jews, but they’re not the kind of people that identify as a denomination.”

Cohen also said that the finding pointed to less solid boundaries around what it means to be Jewish. “The boundaries of being Jewish have become more fluid, so that people can identify as Jewish even if their religion is not Judaism,” he said.

One non-Orthodox Jewish leader dismissed the findings of declining affiliation among non-Orthodox Jews. “The numbers indeed do not tell the whole story. Nor are we surprised,” said Rabbi Steven Wernick, CEO and executive vice president of the United Synagogue of Conservative Judaism, the Conservative Jewish umbrella group, in an email to the Forward. “The work we’ve been doing in revitalizing the epicenter of North American Jewry is beginning to show signs of success and is geared to directly address the implications that come out of this report…. This is a great opportunity for us.”

The Union for Reform Judaism, the Reform umbrella group, did not respond immediately to a request for comment.

Rabbi David Ingber, founder and spiritual leader of Romemu, a Jewish Renewal congregation in Manhattan, objected to the pushing together of a swath of categories in the study’s “Other” group.

“This study lumps together those with no religion or a religion other than Judaism with nondenominational Jews. That means that if I had been called up and questioned, I, a rabbi of a sizable Renewal congregation, would have been in this category,” Ingber told the Forward.

Meanwhile, as non-Orthodox Jews loosen their ties to the movements that have served as mainstays of the community for generations, the growing ultra-Orthodox community displays fewer connections to the sort of secular-oriented non-denominational institutions that have traditionally made up the New York Jewish mainstream.

With additional reporting by Simi Lampert and Hannah Rubin