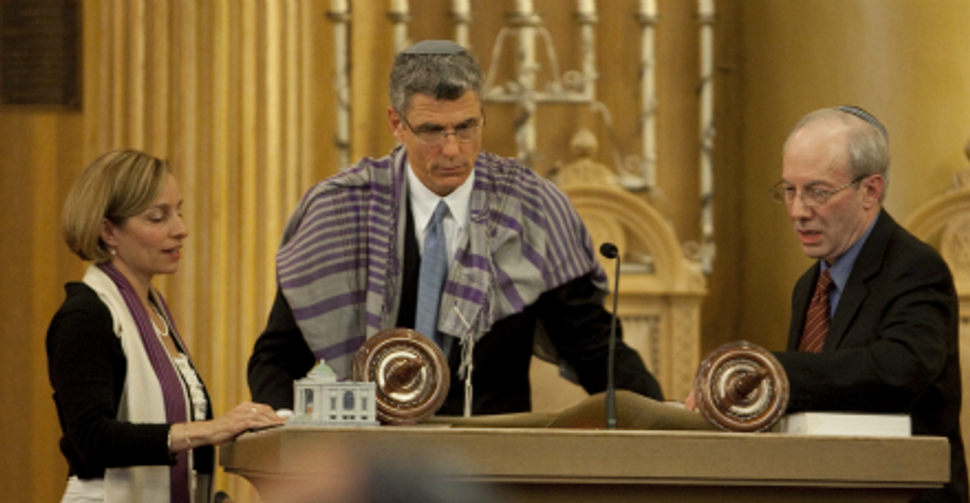 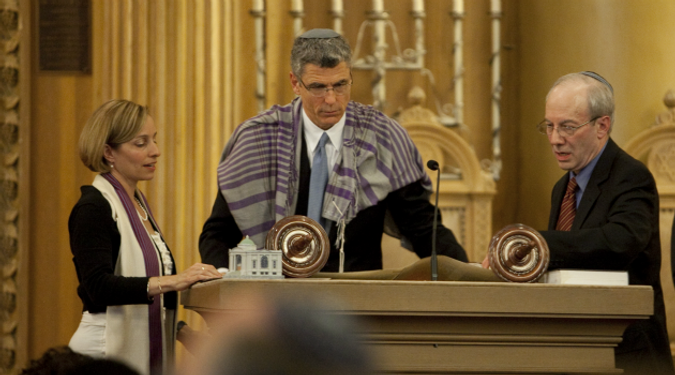 Nod to Change: Rabbi Rick Jacobs pointedly used his installation as head of the Union for Reform Judaism to symbolize big changes at the group. Image by clark jones/urj

Rabbi Rick Jacobs designed the ceremony that installed him as president of the Union for Reform Judaism to broadcast his vision of what the Reform movement — the largest denomination in American Jewish life — should be.

Rabbis and cantors led songs by Orthodox Rabbi Shlomo Carlebach and by Reform folksinger Debbie Friedman at the June 9 event. A 100-member gospel choir sang and got most people in the packed sanctuary on their feet and swaying. The choir came from Greater Centennial A.M.E. Zion Church in Mt. Vernon, N.Y., near Westchester Reform Temple in Scarsdale, N.Y., where Jacobs was the rabbi for 20 years. The new president of the Reform youth movement, an 18-year-old biracial man, chantedf the week’s Torah portion.

Choreographer Liz Lerman led “sacred movement,” reflecting Jacobs’s commitment to the arts and his past as a member of a modern dance troupe. And the ceremony was held at Brooklyn’s Congregation Beth Elohim, a synagogue recently revived by its rabbi and viewed as cutting edge, rather than at one of the Reform old-establishment congregations in Manhattan. 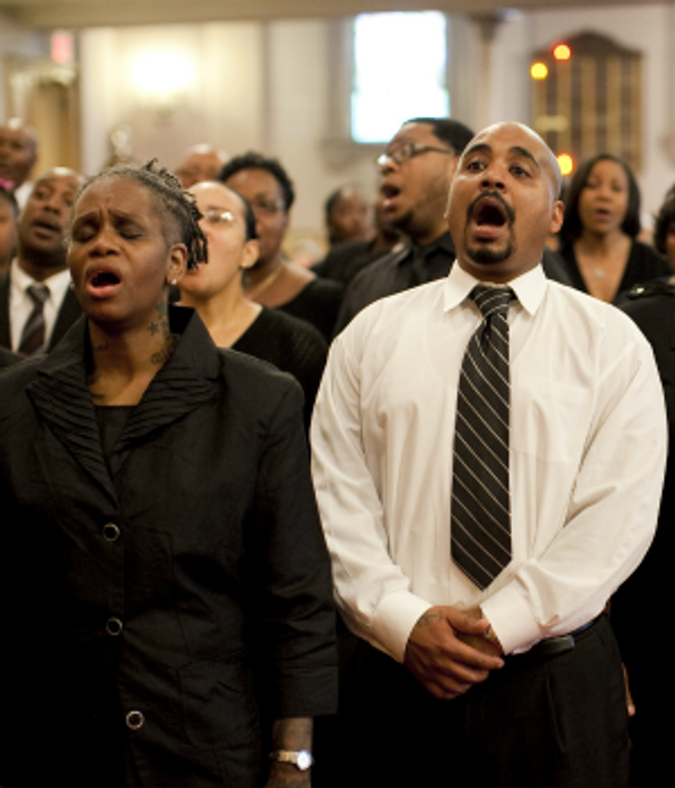 Throughout his installation, Jacobs wore a tallit made from cloth he purchased in Chad, where he visited Darfuri refugee camps with American Jewish World Service several years ago.

While the installation marked the ceremonial start of Jacobs’s time at the helm of URJ, it has been a year since his appointment was announced and six months since he started working there. He immediately restructured the 139-year-old organization, eliminating about 20 positions and shrinking the board of directors. He also changed the board’s mandate and overhauled the organization’s business model.

These are dramatic changes meant to turn around a denomination that is, like the Conservative movement, aging and facing challenges both financial and existential.

“You can be serious about your Judaism and not necessarily affiliated with a synagogue” today, Jacobs said in an interview with the Forward a few days before his installation. “The greatest challenge is creating a Reform movement that is nimble and responsive to all that’s changing in the wider Jewish community and at the same time really anchoring the center,” he said. “We are realigning our priorities to meet those challenges, to have a very clear sense of the timeless as well as the timely. It’s very dangerous to sit and hold on to the status quo, which religious denominations are usually quite good at.”

His biggest challenge may be reversing his denomination’s contraction. The number of URJ-affiliated synagogues has shrunk to 877 today from 909 in 2005, according to Rabbi Daniel Freelander, the URJ’s senior vice president. Some have closed and others have merged. One of the largest, Wilshire Boulevard Temple in Los Angeles, resigned from the URJ last year to protest leadership it saw as unwieldy and ineffective.

An increased number of URJ congregations are struggling financially and paying less in dues to be members of the URJ than they did several years ago. Moreover, they are slower to pay them, Freelander said.

Even Reform Jews who are affiliated seldom attend services and often quit membership as soon as their youngest child becomes a bar or bat mitzvah.

Studies show that Reform synagogue membership overall is aging and fewer young people are joining. There are nearly three times as many people older than 65 in Reform synagogues as there are young adults, according to a 2010 study by the Berman Jewish Policy Archive and the North American Jewish Data Bank.

In his installation speech, Jacobs acknowledged the magnitude of the problem. “Unless we change our approach, there is little chance that many Jews in their 20s and 30s will even enter the revolving door of synagogue affiliation,” he said.

Jacobs was one of the leading members of the Rabbinic Vision Initiative, a group of Reform rabbis that in 2009 publicly criticized the direction and management of the URJ.

The URJ is now focusing on three areas: engaging youth, trying to get congregations to change to better attract participants and members, and helping congregations with what he calls “extending the circles of our responsibility” between Reform Jews and the rest of the Jewish community, including Israel.

But the Reform movement’s longtime emphasis on personal autonomy when it comes to observance of Jewish traditions and practices may make that an insurmountable challenge, observers said.

“The autonomous chickens have come home to roost,” said Rabbi Jeffrey Salkin, an author and the spiritual leader of Temple Israel in Columbus, Ga., “and now people have said, ‘Why do I need to be a member of a synagogue at all?’”

According to Steven Cohen, director of the Berman Jewish Policy Archive at New York University, Reform Judaism’s paradox is that its success has led to its struggles.

Jacobs is aware of the challenge. “Engagement with synagogues tends to be temporary and tenuous,” he said at the Reform movement’s biennial gathering last December. “Of all the movements, Reform Jews lead the way in leaving once childhood education is over.”

Even among synagogue members, attendance at the main Sabbath service on Friday evenings is sparse. Only 17% of an individual synagogue’s members, on average, attend Friday night services, according to the 2010 study, and on Saturday mornings without bar or bat mitzvahs, hardly any Reform congregants attend.

A “staggering percentage of our b’nai mitzvah are eyeing the door by the time they reach Ein K’eloheinu,” the closing hymn of Sabbath services, Jacobs said at the biennial.

Cohen, who is also a research professor of Jewish social policy at the Reform movement’s Hebrew Union College-Jewish Institute of Religion, said that Jacobs’ focus on teens and young adults shows that he “understands the vitality of the movement 20 years from now depends on what we do today with these young people.”

Jacobs has changed the URJ’s institutional focus, taking it from a service organization to a network organization with a core faculty of “thought leaders” and “preferred vendors,” and a role connecting synagogue leaders to each other for advice, Freelander said.

Before Jacobs’ arrival, for example, URJ staffers helped synagogues with leadership development for their boards of directors. “Now we’re outsourcing it,” Freelander said. Similarly, the central office in New York had a staff person who ran programs to train volunteer musicians and worked with congregations on their musical programming. Now the URJ is developing a referral network on the topic.

Additional revenue has come from fundraising. But less money is coming from the dues that congregations pay the URJ. And a couple of years ago, the 270 members of the URJ’s board of directors together donated just $1.5 million, an average of about $5,500 each.

“The culture of the board was different” then, Jacobs said. “The new culture is committed to doing the development. We’re going to really need the culture of giving and find new revenue sources.”

Today the board has 250 members. The 90-member executive committee has been changed to a 30-member oversight board.

The organization has also cut payroll. Close to half the staff is working out of their homes around the country, Freelander said, and nearly one-third of the staff works one or two days a week. In 2008 the URJ employed the equivalent of 240 full-time employees. For fiscal year 2013, that number is 188.

The changes have not produced an immediate budget savings, Freelander said, but more of the budget is being spent on technology and less on staffing expenses. “We’re spending our money very differently than we did two years ago,” he said.

Not every part of the denomination is struggling financially. HUC-JIR, which is Reform, has more than doubled its endowment during the past three years, in the midst of a national recession, to $170 million now from $82 million in March 2009, Rabbi David Ellenson, HUC-JIR’s president, said in an interview.