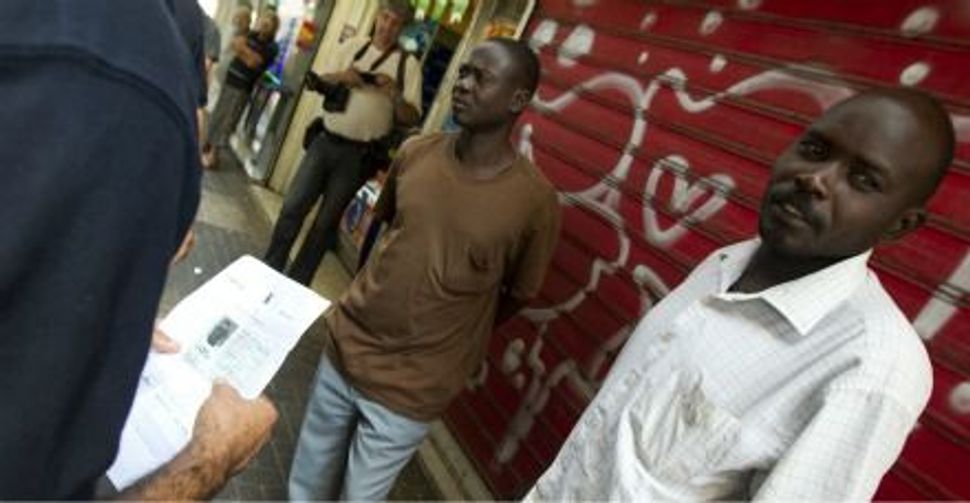 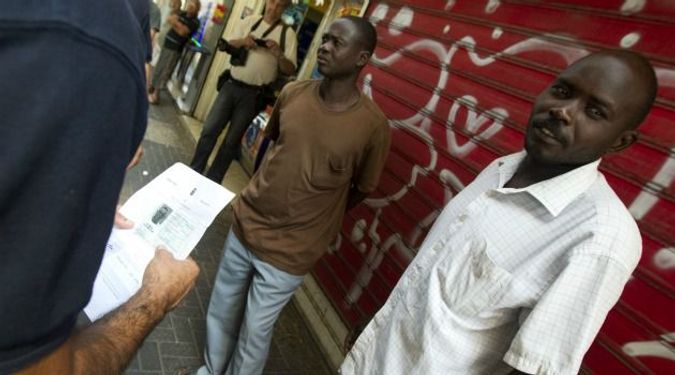 Fear and Loathing: Israeli police question African immigrants. The government is trumpeting a crackdown on illegal immigrants, but some say the policy is mostly for show. Image by getty images

Even as a high-profile round-up targets illegal African immigrants, the Israeli government may be laying the groundwork for a softer policy toward the estimated 60,000 undocumented newcomers whom lawmakers have branded “infiltrators” and a “cancer.”

Independent human rights groups and academic experts say the government knows it cannot deport the vast majority of immigrants because they come from Eritrea or Sudan, both of which are ruled by repressive regimes.

Even inside the government, there is embarrassment over the impression that mass deportations are imminent, and from the provocative statements of Interior Minister Eli Yishai, who leads the Orthodox Sephardic party Shas.

In one such recent statement, Yishai, whose own family immigrated to Israel from Tunisia, told the daily newspaper Maariv on June 3, “Most of the people arriving here are Muslims who think the country doesn’t belong to us, the white man.” In fact, most of the immigrants from South Sudan and Eritrea are Christians.

“We’re very frustrated by the Minister of the Interior and his populist statements,” a senior Foreign Ministry source told the Forward. “Some of them are very irresponsible and they are causing great damage to Israel abroad.”

The source, who would not speak on-the-record due to the sensitivity of clashing with the chief of another ministry, said that it is “very clear” that there will be no major deportation at the moment, due to considerations of international law.

“We’re not going to clash with the UN or the UNHCR,” he commented, using the abbreviations for the United Nations and its High Commissioner for Refugees.

But no government official has been willing to criticize Yishai’s stance on the record, and it is his Interior Ministry exclusively that has direct control of deportation policy.

Despite this, close observers of the government say it is likely to resign itself to a small-scale operation that will aim to satisfy the Israeli public’s desire for action.

Among other things, the analysts point to Prime Minister Benjamin Netanyahu’s shifting statements about the crackdown on African immigrants.

Netanyahu initially promised harsh measures. “My policy on the matter of the illegal foreign workers is clear: First, stop their entry through the fence, while at the same time, expel all infiltrators from Israel,” he said in a May 29 speech.

By June 4, his public position had softened dramatically. He admitted that Israel cannot consider deporting the vast majority of African immigrants, due to the poor political or humanitarian situation in their countries.

“It’s clear that we cannot return Sudanese and Eritreans to their countries,” Netanyahu said, according to Haaretz. Almost 90% of illegal immigrants come from these countries.

William Tall, representative in Israel for the Office of the United Nations High Commissioner for Refugees, sees the shift as significant. “They are acknowledging to the public that there is no quick solution and that there is going to be no quick round-up and deportation,” he said.

The government is “trying to make it look like they’re doing something,” said Bar-Ilan University professor Sam Lehman-Wilzig, an expert on political communication.

The initial crackdown has pointedly aimed at immigrants from South Sudan, a relatively small community of about 1,000 people, and from Cote d’Ivoire. Both those groups may be deported back to their homelands.

Instead of focusing on those African immigrants already inside Israel, experts predict that Israel will push harder to prevent more from coming. A fence is being built along the border with Egypt, and a massive detention camp is planned to house detainees.

“I think [the government’s] policies are not for the 60,000 who are here, but for the 600,000 who could come,” said Tall, the UNHCR representative. “If there is any indication that the flow isn’t endless and is manageable, I would think that the policy would change.”

Lehman-Wilzig predicts that if the border were sealed, “most people will accept that the government has done its best.”

He believes that Israelis would eventually accept the continued presence of Africans as about 1% of Israel’s population. “If we know no more are coming, we can definitely swallow the bullet,” Lehman-Wilzig said.

Some prominent intellectuals have been suggesting such a course of action for some time. In 2010 the Metzilah Center for Jewish, Zionist, Liberal and Humanist Thought released a position paper calling for Israel to adopt a clear immigration policy that makes provision for absorbing some non-Jews. One of the authors, Amnon Rubinstein, dean of the Interdisciplinary Center in Herzliya, told the Forward that he has long considered the best course of action to be “seal off people from entering Israel and treat humanely and with human rights those who are here.”

Still, it’s not at all clear that the Israeli public will be satisfied by a more conciliatory approach. Right-wing politicians have found an eager audience for their claims that Africans are a growing source of crime that must be removed from Israeli society at any cost.

Yishai, who ordered the arrests of South Sudanese immigrants, shows no signs of backing down.

“The deportation operation is getting under way,” he told local television on June 10, after the roundup began. “We are starting the job.”

Africans have been slipping into Israel in large numbers since 2005, but the issue has only recently come to the heart of the country’s national agenda.

The spur to its sudden centrality was a claim that Africans are responsible for a major crime wave in Tel Aviv. Anger rose to a boiling point when news broke in mid-May that Africans were suspected in two sexual attacks on Jewish Israeli women. Politicians led anti-African protests in southern Tel Aviv, and those protests degenerated into violence against the immigrants. Molotov cocktails were thrown at Africans’ homes. On June 4, the violence spread to Jerusalem, where a building that houses illegals was set alight and graffiti telling them to “Get out” was spray painted.

Government ministers added fuel to the fire by spewing a steady flow of incendiary statements about the illegals. Yishai has been the most prolific, declaring that the majority of illegals are “criminals” and that they are responsible for raping Israeli women and infecting them with HIV, the virus that causes AIDS. Yishai provided no evidence of either claim.

Action against illegal immigrants is undoubtedly popular. According to a poll conducted by Tel Aviv University and the Israel Democracy Institute, 85% of Israeli Jews support the anti-African demonstrations. One-third identified with those protesters who turned violent toward them. More than half endorse the statement of Likud lawmaker Miri Regev that they are a “cancer” in the body of the nation (for which she later apologized). Some Arabs, too, are antagonistic toward illegals. About 25% supported the demonstrations, 23% identified with the violence and 19% agreed with the cancer statement.

The sentiment is particularly strong among less affluent and Sephardic Jews represented by Yishai’s Shas party. For them, the immigration issue is, in Lehman-Wilzig’s words, a “double whammy.” Its supporters strongly support limiting non-Jewish influences in the country, meaning that they see Yishai as tackling both an economic and cultural threat.

So far, the bark of the round-ups has been much bigger than their bite. As of press time, just 140 people had been detained, mostly from South Sudan. Unlike Sudanese and Eritreans, the deportation of South Sudanese poses no problems under Israeli law, as a Jerusalem court has approved sending them to their newly independent homeland. Some in the South Sudanese community say many people had decided to go home voluntarily before the arrests began.

Even if Israel manages to deport all the immigrants from countries other than Sudan and Eritrea, it will take just two weeks for the same number of new illegals to cross into Israel.

Before the wave of anger, the government was already building the world’s largest detention facility, which will mean that Israel has room to detain 15,000 potential immigrants. A new law permits detaining all illegals for up to three years and some indefinitely. But with 60,000 illegal immigrants already in Israel and arrivals at 2,000 per month, there will be nowhere near enough space for everybody.

A potential game changer is the border fence, which is expected to be complete by the end of the year.

The goal is to choke off the flow of immigrants. But some independent analysts are skeptical that the fence will do much to stop people who are desperate to escape poverty and oppression in their homelands.

“People suffer a lot on the journey to Israel,” said Sara Robinson, refugee rights coordinator of Amnesty International’s Israel office. “It will be just another obstacle.”