Sex, Wine And Wisdom: “Dr.” Ruth Westheimer Sounds Off at A Not-So-Kosher Conversation 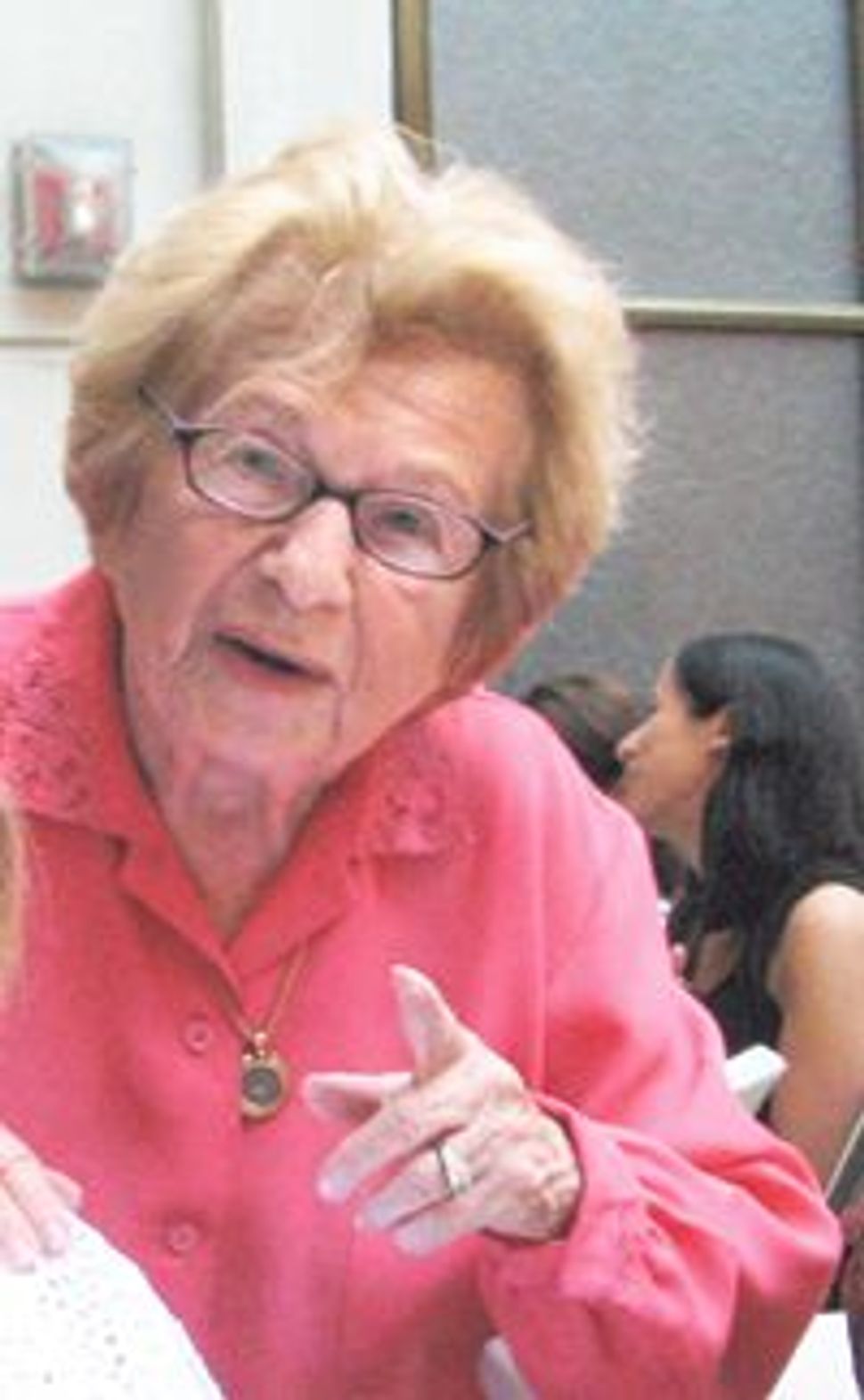 “In Judaism, sex is not a sin, but a mitzvah,” Ruth Westheimer declared in a lecture sponsored by American Friends of Reuth, held on May 31 at Congregation Edmond J. Safra. “A rabbi has to have sex every day, a salesman every seven days. The frequency of sex depends on the profession,” Westheimer said. Westheimer recalled that when her husband was asked by Diane Sawyer about his sex life, he said, “It’s like the shoemaker’s children who have no shoes.” She chuckled.

“Sex is in the brain,” Westheimer argued, citing a biblical example as evidence. In Genesis, she said, Joseph “had the hots” for Potiphar’s wife. But just as he was “about to have sex with her, Joseph imagined his father’s face before him and lost his erection!”

On a less steamy note, Westheimer explained that the “Dr. Ruth” title dates from a time when Americans had trouble pronouncing her German last name. 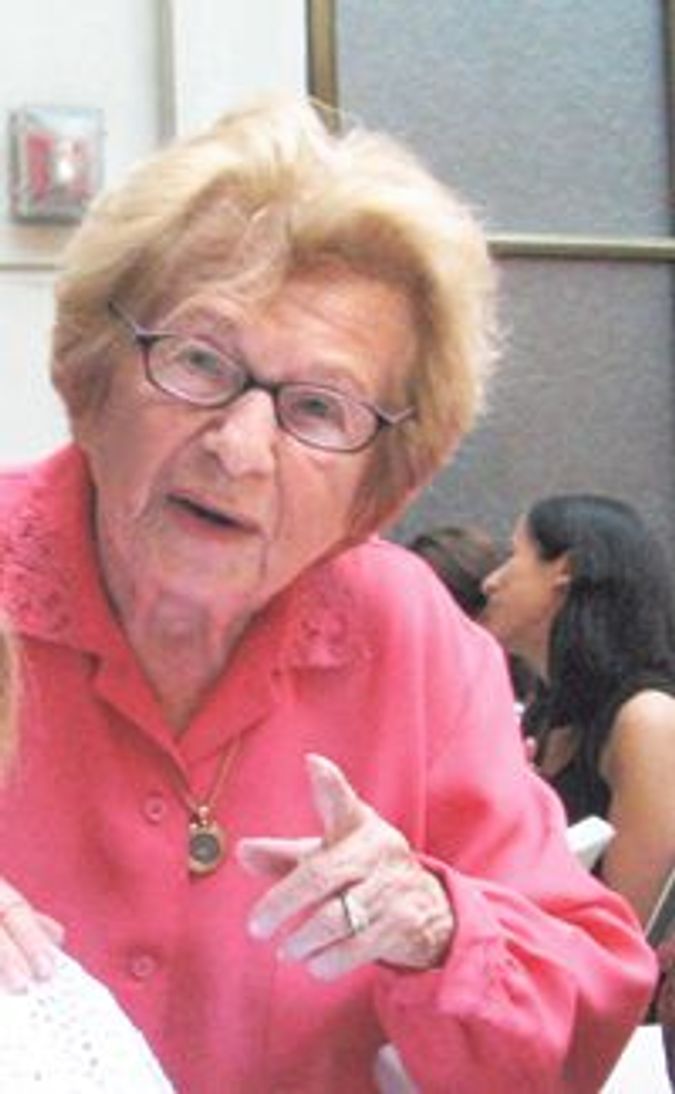 Westheimer decried the TV series “Sex and the City” as “a terrible role model offering unrealistic expectations [of] sex every evening.” Besides, she said, “who can dress like that?!”

In defense of her droll, often startling advice, Westheimer said: “A lesson learned with humor is a lesson remembered.” She also held up a bottle to advertise her latest venture: a new line of wine called Dr. Ruth’s Vin d’Amour. “It has a low alcoholic content, so he can perform and she won’t go to sleep,” Westheimer explained.

Seth Haberman, founder and CEO of Visible World Inc., moderated a question-and-answer session after the talk. Asked about her having been a sniper during Israel’s War of Independence, Westheimer proclaimed, “I was a sharpshooter!” She described meeting Britain’s Prince Philip at Buckingham Palace and telling him that “I was one of those people [in Palestine] who told his people to ‘go home!’” In response to another question, about how long a couple might live together without a formal commitment, Westheimer issued a sobering retort: “You must have a time limit!”

On June 5, a day after her 84th birthday, Westheimer celebrated at the Museum of Jewish Heritage. The celebration included a screening of an episode of the BBC series “Extraordinary Women” that featured Westheimer. The series has also profiled Grace Kelly, Madame Chiang Kai-Shek, Hedy Lamarr, Wallis Simpson and Coco Chanel, among others.

“This is a cathedral to all people… a place of culture, artistic impact, social programs,” said the Rev. James Kowalski, dean of The Cathedral Church of St. John the Divine, at the 32nd annual Spirit of Achievement Awards ceremony, held on May 30 in the cathedral’s great crossing space. Among the honorees were philanthropists Ellen and James Marcus, who support such organizations as the 92nd Street Y, the Perlman Music Program, the Metropolitan Opera and Lenox Hill Hospital. James Marcus said: “I always thought that a philanthropist is someone who gives their grandfather’s money away. Having worked 27 years for pay, for the last 30 I have paid to work… for nonprofits. That’s quite a turnaround…. I was very lucky to be born in this city.’”

Alec Baldwin, who attended the gala with his fiancée, Hilaria Thomas, presented the Artistic Honoree Award to Zarin Mehta, president and executive director of the New York Philharmonic. “We stay here in this city to be part of something,” Baldwin said. “It costs so much money to live in New York. All of us could live 150 miles from here and own our own ZIP codes. We sacrifice to keep New York’s great institutions alive and afloat.”

Also honored were philanthropists Prema and Wallace Mathai-Davis. In 1979, Prema Mathai-Davis, project director at Mount Sinai School of Medicine and at Hunter College, developed Hunter’s Gerontology Center, one of the first of its kind in the United States. In 1990 she was appointed commissioner of the New York City Department for the Aging, which, her biography notes, “resulted in improved service levels for the elderly.” Wallace Mathai-Davis, an asset management and banking executive, is chairman of Shepherd Kaplan, LLC. He was also a founder of one of the first alternative schools in New York City.

Kowalski asked me, “When were you last at Yad Vashem?” He told me his most recent visit was two years ago, and added, “It has been changed to address new generations.”

At the Inaugural Birthday Bash of the American Cancer Society, held on May 22 at the St. Regis Roof, TV personality and interior designer Nate Berkus was honored with the organization’s Humanitarian Award, and interior designer Geoffrey Bradfield received the Man of Achievement Award. Novelist Barbara Taylor Bradford, author of, most recently, “Letter from a Stranger” (St. Martin’s Press), co-hosted the event, making history that night when she ordered some rudely chatting guests to “Shut up!” After amplifying the request with a declaration of “I am the second Margaret Thatcher!” Taylor Bradford prevailed.

Co-chair Diana Feldman, who is the volunteer chairman of American Cancer Society events, said: “The American Cancer Society is turning 100 years next year and will continue to help millions of people to celebrate more birthdays by detecting cancer early…. It has provided $3 billion since its research program began in 1946.” Lisa Kogan, a writer-at-large for O, the Oprah Magazine, presented the award to Berkus, whose career took off when he was invited to redesign a small space for “The Oprah Winfrey Show.” Berkus, who lives in Chicago, told me his family’s roots go to back to Minsk, Poland and London. Bradford presented the award to her old friend Bradfield, who was born in South America.

My dinner chat with Bradford was cut short because she was leaving for her book tour. But we reconnected on June 4 for a phone interview. She told me: “The Holocaust has fascinated me as a young journalist…. I know about the Jews. My husband is Jewish.” Reflecting on her roots, Bradford said: “I am Church of England, grew up in Leeds…. I was very aware [of the] Eichmann trial in Jerusalem. I’ve been fascinated by the Second World War, the Third Reich. In Chicago, I talked at the Holocaust Museum in Skokie. We went with Jewish friends, and I saw [a photo of] this beautiful couple. They were just gorgeous… and I started to cry. ‘I cannot go through this museum!’ I said. I don’t understand why I am so moved. What inspired my book was my imagination and my interest in World War II.” And as for reviews? Bradford boasted: “I am untouchable…. Rupert Murdoch owns my English publisher HarperCollins … no one would [dare] write anything bad about me in England. My books have been sold in 90 countries and translated into 40 languages. To date there are 86 million copies worldwide.” In 2007, Queen Elizabeth awarded her the Order of the British Empire for her literary achievements.

Sex, Wine And Wisdom: “Dr.” Ruth Westheimer Sounds Off at A Not-So-Kosher Conversation