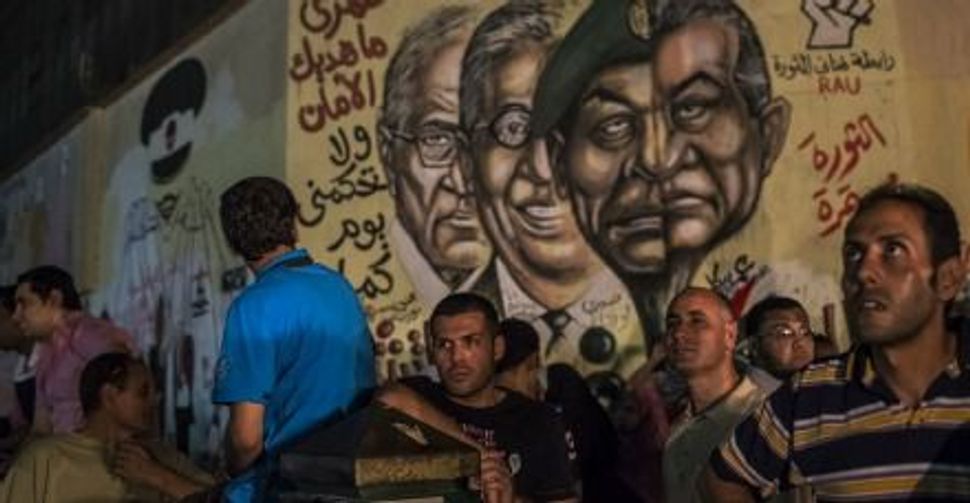 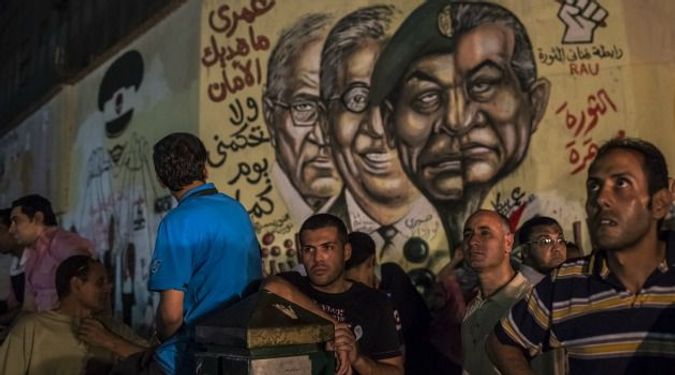 Watch and Wait: With ex-President Hosni Mubarak lying in a coma, Egyptians wonder if the military will respect the results of the just-completed presidential election. Image by getty images

It’s 2 a.m. Wednesday morning and nearly everybody here in Cairo, if they are still awake, wonders how it will all go down.

As Egypt’s ousted strongman Hosni Mubarak lies dead or dying, official results of the final round of voting for president will not be announced by the Electoral Commission until Thursday at the earliest. A general uneasiness fills the air.

The final round voting ended Sunday night. By Monday evening, the Muslim Brotherhood’s political arm was claiming victory for its candidate, Mohamed Morsi, by about 1 million votes, based on unofficial reports from the thousands of polling stations throughout the land. Twenty-four hours later, Morsi’s opponent, Ahmed Shafiq was claiming that he was the winner by a similar margin out of about 50 million votes cast.

The Muslim Brotherhood’s claim was backed up by unofficial results published on Al Ahram, Egypt’s most prestigious and semi-official newspaper and certainly no supporter of the Muslim Brotherhood. Two other independent newspapers confirmed the projection of a relatively narrow victory for Morsi.

Just about everyone understands that Shafik was prime minister when Mubarak was forced by the military to resign last year, and they understand what this means, or think they do. Shafik was soon forced out of office by popular demand, or at least the demand of the demonstrators who were then thronging Tahrir Square.

Shafik is viewed as the nominal candidate of Mubarak’s once-ruling National Democratic Party (NDP), which is officially illegal now, but still maintains a vast patronage network throughout the country. Many see Shafiq as the favored candidate of the military.

That would seem obvious. But like many things in the Middle East that seem obvious at the time, these assumptions could possibly be unfounded.

It’s just possible that the Muslim Brotherhood, with still painful memories of conflict with the armed forces nearly 60 years ago, and the military command are perhaps quietly coming to some sort of edgy understanding. At least that is what, late this evening, many thoughtful people in Cairo are hoping for.

Nearly everyone has his or her scary scenario.

For those who voted for Morsi either with passionate Islamist enthusiasm or tepid “lesser of two evils” sentiment, the fear is that the armed forces would jiggle the results and set aside a Morsi victory. They would crown as president Shafiq, who like Mubarak is an Egyptian Air Force hero of the October 1973 Arab-Israeli War. That would be followed by martial law and mass arrests of those opposed to Shafiq.

Perhaps that is why one member of the now-dissolved parliament would only speak off the record. He said: “No one can predict exactly what. But something is going on and something is going to happen.” Cornelis Hulsman, editor-in-chief of Arab-West Report, interpreted the remark to mean that anti-Shafiq partisans do indeed fear the worst.

On the other side of the political coin, any number of pro-Shafiq partisans also fear a Muslim Brotherhood victory. These include present and retired Egyptian diplomats, nearly every taxi driver in Cairo, nearly anyone in the important and devastated tourism industry, businessmen close to the former regime, factory workers without work and secular intellectuals. They fear a Brotherhood victory will mean some sort of eventual reign of Iran-style Islamist terror. Or at the very least a nasty round of repression.

They point to the track record of the post-Mubarak parliament dominated by the Muslim Brotherhood. There was little talk in that short-lived parliament of deeply needed measures to restore some semblance of social justice after a decade or two of crony capitalism and flamboyant neo-liberalism. In fairness, the Brotherhood has been sounding rather more conciliatory and pluralist minded over the past few days.

If the assumptions behind this analysis seem a bit out of sync with the reports coming out of Cairo, let me clarify what I believe to be basic illusions. The first is that there was a Revolution and it was betrayed by armed forces this past week, in what has been widely described as a “coup d’etat.”

I think that is wrong and wrong again.

There was an uprising that began at Tahrir Square on January 25, 2011. It was not a revolution – which means a change of power from the old establishment to the new forces.

Yes, there was a coup d’etat in Egypt. But it did not take place this past week. It occurred on February 11, 2011, when the Tahrir demonstrations grew so massive that the military had to choose between Mubarak and saving their own skins.

Not surprisingly, the armed forces command opted for a soft coup d’etat. They told their old comrade-in-arms Husni Mubarak it was time to go and to take his family with him. He went quietly, if not into the night, at least to the Sinai resort town of Sharm al Sheikh.

The Tahrir “revolutionaries,” brave, heroic and self–sacrificing as they were, did not overthrow Mubarak. It was the armed forces, driven into into crisis mode, that did it.

It was a coup d’etat, not a revolution. And in effect, it has changed very little, except to usher in this strange 16 months of stasis. There is all-pervasive listlessness, escalating unemployment and poverty and street crime, a lot of garbage strewn streets, and more petty corruption than ever.

Yes, everybody declares himself to support this illusionary revolution. Everyone from the army brass to the Muslim Brotherhood whose youth movement did battle alongside the liberal and socialist youth at Tahrir. The Brotherhood itself pointedly stayed on the sidelines until the last days, when even Barack Obama didn’t need a weather vane to know which way which way was blowing.

Even Mubarak in his pathetic last speech, allegedly written by his son, Gamal, declared he was with the revolution. That was when he declared he was not stepping down. The next day, he was sent packing by the army.

The fundamental illusion was fed by a romantic foreign press corps that flooded into Cairo, entranced by the appearance of a brave, relatively non-violent revolution. Since then, there have been some concessions wrung from the army by successively less massive demonstrations, like the demand to bring Mubarak back from his internal exile to stand trial along with his sons and top aides. They were paid for by the disenchantment of an Egyptian silent majority who saw months pass with little or no change in their lives. This state of disenchantment was ignored to a great degree by the foreign media.

Paradoxically, this disillusionment with the pace of change might have brought Shafiq to get the majority of votes if the armed forces hadn’t pushed the envelope too much this past week. It particularly overstepped when the Supreme Court (widely seen as a tool of the military) dissolved parliament.

The one alternative left was the one disciplined political mass movement in Egypt: the Muslim Brotherhood. It is the one group strong enough to survive nearly 60 years of on-and-off repression, sometimes ferocious under Gamel Nasser, greatly dialed back under Anwar Sadat, and routinely but lightly applied by Mubarak.

The rest is the most recent history. Now, Mubarak lays dead or dying. And we, here in Cairo, await the unfolding of history, whatever one believes it to be.

Abdallah Schleifer, a former bureau chief for NBC News in Cairo, is a decades long resident of Egypt and a professor of journalism, emeritus at American University, Cairo.