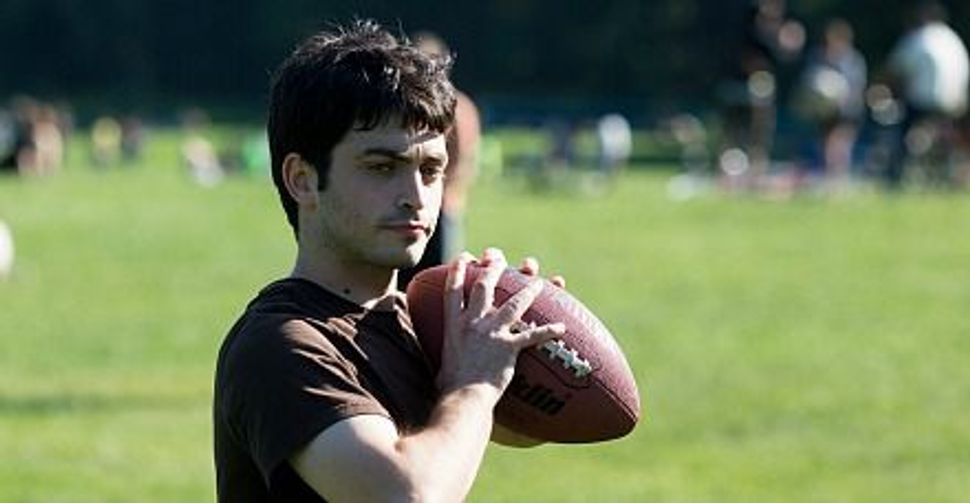 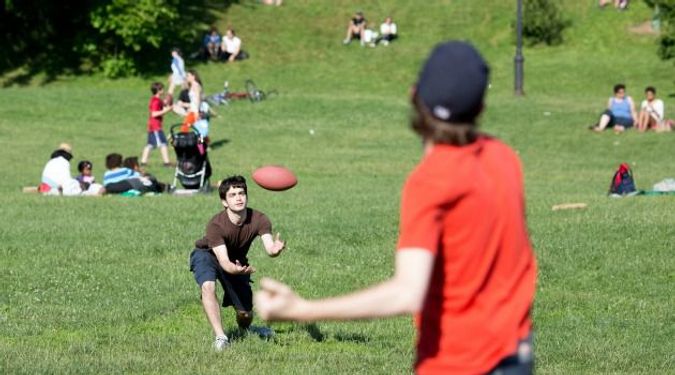 Potent Statement: Tossing a ball around in the park is a powerful statement of rebellion for young people who leave ultra-Orthodox communities. Image by claudio papapietro

In a crowded meadow in Brooklyn’s Prospect Park, a group of 20-somethings swarmed a soccer ball like a bunch of sixth-graders at recess.

A few knew how to dribble, but some could barely kick. One tried to tell the goalie that he wasn’t allowed to pick up the ball. Errant passes peppered nearby groups lounging on the grass.

The players looked pretty much like any other group in the park on a balmy Sunday evening. The difference? The pick-up game players are all former ultra-Orthodox Jews making up for lost time.

In the Hasidic communities where most of the players grew up, playing sports is generally forbidden. Now the group meets every other Sunday to play either soccer or basketball, a game that some ultra-Orthodox consider the most non-Jewish sport, according to one ex-Hasid.

“I could probably hold my own in a real game [now],” said Sol F., 22, who just moved out of his parents’ home in the Satmar community of the Williamsburg section of Brooklyn.

The players are members of Footsteps, a not-for-profit that provides social services to people leaving ultra-Orthodox communities. Footsteps is careful about the privacy of members who may still be leading double lives. The Forward agreed to photograph only the members who gave their explicit permission, and to refer to some members by their first name and last initial.

The afternoon started off slowly. Shmuly Horowitz, 22, who grew up in the Bobov Hasidic community in Brooklyn’s Boro Park, kicked around a soccer ball, then tossed a Frisbee and a football with a handful of other ex-Orthodox guys.

Soon they had park-goers scampering away, with their bad soccer passes and Frisbee tosses threatening to land on or near other people’s heads.

Hasidic kids don’t grow up playing on AYSO or Pop Warner teams. Among most ultra-Orthodox, sports are seen as frivolous, a waste of time better spent learning Torah. Exposure to sports varies from community to community, and some ultra-Orthodox play team sports at summer camp. For most, though, games stop after elementary school.

Even the games Orthodox children play aren’t quite like the games other kids play.

In Satmar, school kids play a game similar to Sharks and Minnows, where one person stands in the middle, trying to tag everyone else as they run back and forth between two safe zones. Once tagged, a player has to help tag other players.

Instead of a shark, however, the kid in the middle is called a “galach,” Yiddish for “priest.” The game is apparently intended to instill fear of conversion in the insular community. But Sol said that when he was young, he missed the game’s anti-Christian overtones.

A 30-year-old former Satmar remembered another game, Limination. The rules were just like Elimination, an every-man-for-himself version of dodge ball. The Satmar wasn’t sure why the name had been bastardized. The only difference between Limination and elimination that he could identify was that the Satmar kids didn’t have any balls to play with, so they stuffed old sweaters into an oversized fiber envelope and taped the thing into a vaguely spherical shape.

A lack of sports equipment and instruction is a common theme. One player in his mid-20s, from a Hasidic community near Montreal, said he and his friends used a basketball to play a version of soccer in which dozens of kids tried to kick a ball to opposite sides of a lot. The basketball was called, for some reason, a “rocketball.”

The ex-Montreal Hasid said that all game-playing had stopped after he turned 13, and boys were made to wear black hats and long coats whenever they were outside. He didn’t get his first pair of tennis shoes until after he had left Orthodoxy and enrolled in college in New York.

Horowitz had played some baseball growing up in Boro Park, but doing so was a serious act of rebellion. As a student at a Hasidic yeshiva, he and his friends would sneak off every Friday afternoon to the park. Led by one boy whom Horowitz remembered as an athletic prodigy, the boys formed a baseball team. Horowitz played left field. They played furtive games against teams of boys from non-Hasidic ultra-Orthodox yeshivas, going undefeated for two years.

Eventually Horowitz and his friends were ratted out to school officials and forced to stop playing or face expulsion.

“I used to watch Little League games [and] dream of playing with them,” he said.

On the lawn in Prospect Park, the gap in abilities was vast. The Montreal Hasid, a natural athlete, ran circles around the other players. Sol, dressed in hip jeans and a Yankees cap, was enthusiastic but gawky.

Sol and Horowitz organized the biweekly Footsteps game themselves with support from the organization, which sent a social worker to some of the games. Horowitz handled logistics, while Sol recruited participants.

Until May, the players met at a rented Brooklyn basketball court under the highway, on Third Avenue. A group of Hasidic men had the court just before them, so Horowitz told people to come a little late if they were afraid of running into someone who might recognize them.

Sol actually did recognize one of the Hasidic players. “Their wives probably think they’re at shul, learning,” he said. “It’s a shame they have to hide it.”

By all accounts, the basketball games were a mess, at least at first.

“We gave up playing with rules,” Horowitz said of the first time they played.

Some of the kids had never touched a ball. Others had a bit of game. Their coach, a 28-year-old former Lubavitcher Hasid from Brooklyn’s Crown Heights named Hirshy Cohen, had no coaching experience.

“It wasn’t like a high level of coaching that was needed,” Cohen said.

The players split the court into two half-court games, relatively experienced players playing on one side and first-timers playing on the other. Cohen tried to get the new players to run drills, but there wasn’t much interest. Instead he just let them play, refereeing a bit and managing the flow.

The games were coed, which was a matter of principle for Sol. He says he lived for too long with Orthodox edicts about separating the sexes.

“To me, not coed seems like another [Orthodox] idea,” he said.

With the arrival of warm weather, the game has moved outside. That’s good for the players, who had to pitch in to help cover the cost of the rented court.

For now, the change of venue feels good. More people come, and the soccer game is more relaxed. Sol and Horowitz picked teams, trying to convince even those who hadn’t wanted to play to join in.

In between games, Sol cooked up hot dogs on an aluminum pan grill. One attendee asked if the hot dogs were kosher. Told they were, the attendee joked, “Then I don’t want any.”