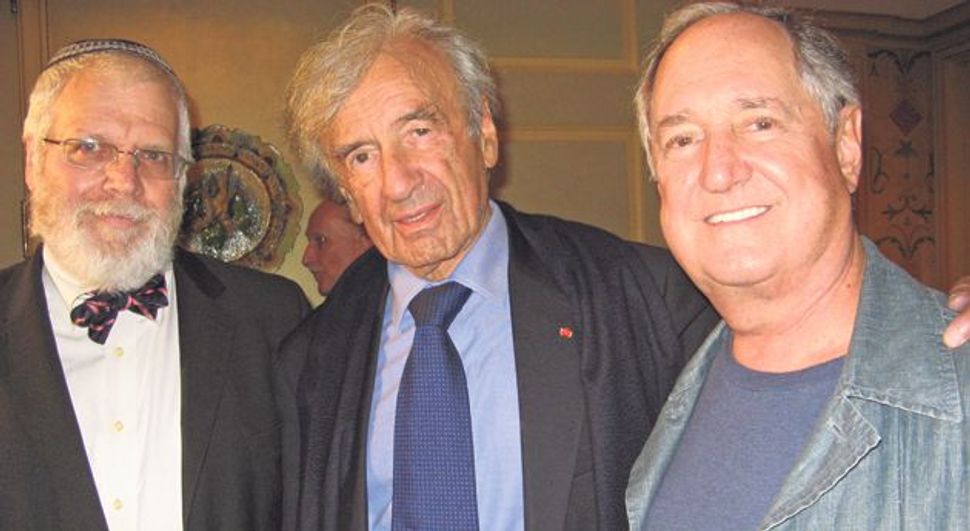 As a forshpays an appetizer, for the National Yiddish Theatre — Folksbiene’s gala, held on June 12 at Town Hall, Folksbiene benefactor Leanor Segal hosted a private tea party May 21 at her Park Avenue apartment. The party celebrated three Lifetime Achievement Award honorees: singer-songwriter Neil Sedaka, Yiddish song anthologist Chana Mlotek and ophthalmologist H. Jay Wisnicki. Sedaka, seated at the piano, said: “It was because of my Yiddishkeit that I was able to compose so many songs over the years.” Guests included Marion and Elie Wiesel, as well as Folksbiene’s artistic director, Zalmen Mlotek; its associate artistic director, Motl Didner, and its president, Mark Mlotek. Also in attendance were Forward publisher Samuel Norich; Barry Tucker, president of the Richard Tucker Music Foundation, and Orin Snyder, a partner at the law office of Gibson Dunn. Folksbiene’s executive director, Bryna Wasserman, whom gala chair Judith Friedman Rosen described as “a woman of vision and determination who is intent on taking this theater into its next century,” declared, “We are reinventing ourselves, not breaking with our parents’ heritage.” This historic tea party marks the first time Wiesel and Sedaka paired their voices in Yiddish song, with Zalmen Mlotek accompanying at the piano.

The roster of performing artists at the sold-out, 1,300-seat Town Hall Gala included Dudu Fisher, whom Folksbiene board chairman Jeffrey Wiesenfeld introduced as an “international Jewish song icon”; Cantor Robert Paul Abelson of New York City’s Temple Israel; Cantor Rebecca Garfein of Congregation Rodeph Sholom; film and television actor Avi Hoffman, who began his career at the Folksbiene at age 10, and Lorin Sklamberg, a founding member of the Klezmatics. Eleanor Reissa**, a former artistic director of Folksbiene, thrilled with her rendition of “Yosl, Yosl,” a song about a girl so in love with a “hot guy” that she just might “krapir,” expire. Wisnicki, former director of ophthalmology at Beth Israel Medical Center, performed at the piano, accompanied by his 96-year old father on mandolin. An alumnus from the Yiddish Camp Hemshekh, Wisnicki recounted, “Since as a child I spoke Yiddish at home, when my parents didn’t want me to understand they spoke in Polish!”

“To be on the stage with [award presenter] Elie Wiesel is as good as it gets on this planet,” said Mandy Patinkin, who credited the late theater impresario Joseph Papp with inspiring him to learn Yiddish songs. “My life began to change,” he said. “Yiddish has always been one of the great, great gifts to my life.” After performing several songs, Patinkin got the crowd to its feet with a Yiddish version of the “Hokey Pokey.”

Singer Jay Black delivered a vibrant rendition of “Cara Mia,” the No. 4 Billboard hit in 1965, and then sang the evocative “Vu Iz Dos Gesele?” (“Where Is The Little Street?”) in beautifully articulated Yiddish.

“You make people remember,” Wiesel began as he presented the award to Chana Mlotek. “All of us here salute you.” A beaming Mlotek responded: “I am doubly honored that Elie Wiesel presented me with the award. I am grateful for his presence here. He has graced two of my anthologies with forwards. With my husband, Yosl Mlotek, I have researched and resurrected several thousand [Yiddish] songs, many of which were never written down or published and, save for our work, would have been lost. Together with our [Forward] readers, we were able to rescue part of our cultural heritage and present part of our efforts in several anthologies.”

Seated at the piano, Sedaka sang “Mayn Yidishe Mame.” A children’s chorus joined him for his hit “Breaking Up Is Hard To Do,” followed by a Yiddish and English version of “Tumbalalaika.” Sedaka told the audience that he and his wife Leba, whom he met in the Catskills, were celebrating their 50th wedding anniversary. Brooklyn Borough President Marty Markowitz read a proclamation to Sedaka and noted, “You can take the boychick out of Brooklyn, but you can’t take Brooklyn out of the boychick.”

An unexpected video greeting came from Mike Huckabee, who offered “a mazel tov to the Yiddish Theater. May it live for another 100 years!”

On a personal note, in 1948 I worked after school at the 123rd Street building of the YIVO Institute for Jewish Research. Chana Gordon, secretary to YIVO’s founder and research director, Max Weinreich, was my boss. Gordon had just returned from Los Angeles, where she had traveled to go to a seminar attended by Yosl Mlotek. I had known Mlotek when I was a child in Warsaw, Vilna and Kobe, Japan. When she married Mlotek, Gordon launched a dynasty.

The Eighteenth Aleph Society Dinner, held on June 11 at the Morgan Library and Museum, celebrated Rabbi Adin Even-Yisrael Steinsaltz’s 75th birthday and the launch of his English translation of the Koren Talmud Bavli. The evening’s highlight was a conversation between Steinsaltz and Deborah Lipstadt, Dorot Professor of Modern Jewish and Holocaust Studies at Emory University. Aleph Society board member Fanya Gottesfeld Hellergave the welcoming address.

Each guest was given printed excerpts from the Mishna and Gemara dealing with the not-so-pleasant debates between Rabban Gamliel and Rabbi Yehoshua about rebuilding a Jewish community in the wake of the Roman destruction of the Second Temple. Dinner co-chair Daniel Kaufthal, a principal in the real estate investment firm Katz Properties, set the stage for the dialogue.

“For me, this is a particular thrill, because so much of my work is on Jews as objects and not, as we do tonight, Jew as subject,” Lipstadt began. “ Most of my work, to put it in a different way, is what is done to Jews, and tonight we talk about what Jews do… and that’s learning and studying Torah,” she said. Then Lipstadt posed a question: “Should the Beit Hamidrash, and by that I mean as a metaphor for the larger Jewish community, be an authoritarian model or a more democratic vox populi model?”

Steinsaltz responded: “I don’t believe that is the subject of the discussion!” Lightheartedly, Lipstadt answered, “That’s what I call getting the ground pulled out from under you.” Steinsaltz jovially parried: “You won’t finish up in tears?” Lipstadt, who prevailed in her libel trial in London against Holocaust denier David Irving, responded with equal good humor: “I faced far worse than you.” She chronicled the trial in her book “Denying the Holocaust” (Free Press, 1993).

Later in the conversation, Lipstadt asked Steinsaltz, “Today’s scholarly leaders, the great rabonim, great Torah scholars, are they imbued with a certain degree of knowledge, of expertise, on being leaders outside the reality of the Torah?”

Steinsaltz shook his head and, still smiling, replied: “You are tempting me to speak about rabonim, and that is always a dangerous subject.” Lipstadt came back with, “That is why they asked me to ask it. “ Everyone enjoyed the verbal volleys and took home a copy of the first volume of the Koren Talmud Bavli.