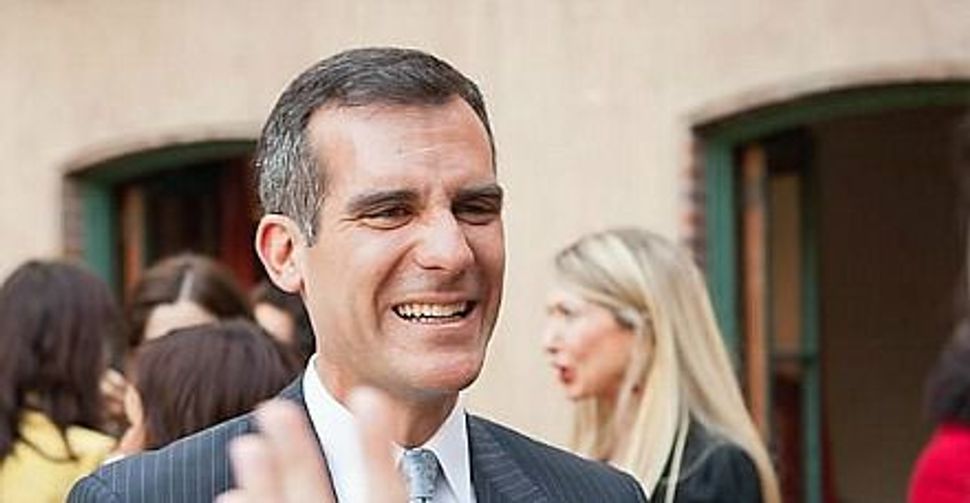 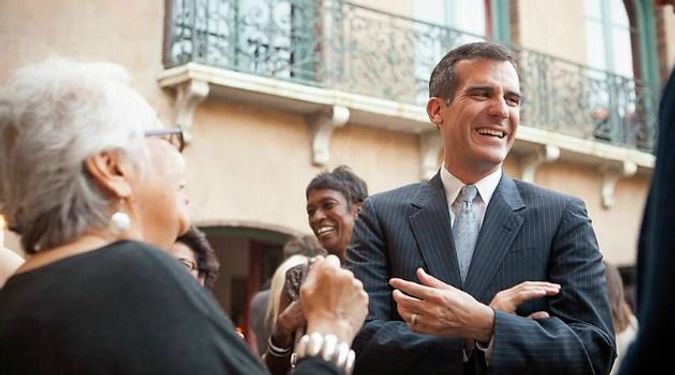 Jew and Latino: Los Angeles City Councilmember Eric Garcetti greets voters. He is running for mayor of the melting pot city by emphasizing his mixed Jewish and Latino heritage. Image by Meeno Peluce

Noshing on chocolate chip rugelach, Garcetti invoked the landmark fusion fast-food joint known for its signature pastrami taco dish to underline the mixed heritage that he hopes will help propel him to City Hall as L.A.’s first Jewish mayor.

Garcetti, who served a decade in the City Council and six years as its president, touts his record of public service as the main reason to elect him mayor in June 2013. But it can’t hurt to invoke his unusual background in a city where Latinos comprise nearly half the population and the 6% that are Jews customarily deliver as much as 20% of the vote.

The product of a Mexican family of Italian extraction on his father’s side and Russian Jews on the maternal side, Garcetti, 41, is a fourth-generation Angeleno. Both sides of his family came to L.A. in the early 20th century, fleeing the Mexican Revolution on one hand and conscription for the Russo-Japanese War on the other. Both settled within blocks of one another in East L.A.’s melting pot Jewish-Latino neighborhood of Boyle Heights.

Early polls show Garcetti, one of three declared mayoral candidates, in a good position to take over when current mayor Antonio Villaraigosa departs after his second, and final, term in office.

He’s far from alone in courting the Jewish vote. His two declared challengers — African-American City Councilwoman Jan Perry (a convert to Judaism) and City Controller Wendy Greuel (married to a Jew) — also have pretty strong credentials in that department.

The 800-pound political gorilla in the room is L.A. County Supervisor Zev Yaroslavsky, one of the city’s best-known politicians. The 63-year-old Yaroslavsky has not decided whether to join the race. The veteran politician and legendary champion for Soviet Jewry is widely perceived as the front-runner in the race should he choose to run.

Garcetti’s L.A. Jewish roots match Yaroslavsky’s, and then some. His maternal grandparents, Louis and Julia Roth, were Labor Zionists and founders of Louis Roth Clothes, which ran the first union shop in L.A.’s garment industry. Not far from there, Garcetti recalls, at the home of his Mexican grandparents, he enjoyed bowls of homemade menudo served on Sundays.

He is fluent in Spanish and acknowledges knocking back at least one tequila shot with Villaraigosa on a jaunt showing off the nightclubs in the Hollywood precincts of his district. He also attends services at IKAR, the congregation founded by Rabbi Sharon Brous, a charismatic figure in L.A.’s Jewish community who counts a number of entertainment industry movers and shakers as regulars in her synagogue.

Garcetti’s name has broader cachet in L.A. for another reason: His father, Gil Garcetti, was the city’s district attorney who oversaw the prosecution of the 1995 O.J. Simpson murder trial, in which the retired football star was famously acquitted. The high-profile trial, in the first of the elder Garcetti’s two terms in office, elevated the family name to such a degree that many Angelenos today often mistake the son for the father.

Eric Garcetti’s Council District 13 is a 13-square-mile collection of neighborhoods, strung like multicolored beads along Sunset Boulevard between downtown and Hollywood. It covers the gamut of L.A.’s ethnicities and proclivities, including Thai Town, Little Armenia, Koreatown and Filipinotown; the gay/lesbian and hipster enclaves of Silver Lake; Echo Park and Los Feliz. There are also swathes of Mexican and Central American areas where a casual visitor might easily imagine having taken a wrong turn in an El Salvador barrio, in Guatemala, or Tijuana.

Latinos count for more than 60% of the quarter-million inhabitants of the densely populated district, which has a median income of about $24,000.

Paramount Pictures, the only major movie studio still located in Hollywood, is the district’s biggest employer. Tourists flock to the district’s attractions, like the Hollywood Walk of Fame. But unemployment is high, and 40% of the district’s children live in poverty.

The problems in the district have sparked a raging battle over urban redevelopment, which has generated the only major controversy of Garcetti’s time in office. Along with Villaraigosa, Garcetti supports a community plan that envisions high-rise apartment complexes and mixed-use commercial towers in the district, fostering a living-and-working neighborhood anchored to Hollywood’s new subway stop.

Garcetti trumpets the plan, recently approved by the city council, as coming on the heels of a “second golden age of Hollywood,” as he put it at a January gathering of 300 business and community leaders hosted by the Hollywood Chamber of Commerce.

Many residents oppose the plan. Increased street traffic and noise from Hollywood’s status as the new center of L.A.’s nightclub scene already has the neighborhood up in arms. Many longtime residents fear the loss of much of Hollywood’s funky, rundown but affordable housing to sleek skyscrapers that will block views of the Hollywood Hills and its celebrated sign.

Garcetti, an unapologetic booster for development, sees even an upside to L.A.’s horrendous traffic.

“Hey, we’re not Detroit, which doesn’t have any traffic,” he cheerfully told the Forward. “I want to make sure L.A. is the creative center of the world.”

Garcetti’s enthusiasm notwithstanding, skeptics are not hard to find. “The City Council is not popular,” noted Raphael J. Sonenshein, executive director of the Edmund G. “Pat” Brown Institute of Public Affairs at California State University, Los Angeles. He cautioned that Garcetti’s long tenure on the city council could pose a stumbling block on his way to City Hall.

His ethnic roots could be a plus, within limits, said Sherry Bebitch Jeffe, political analyst and senior fellow at the USC Sol Price School of Public Policy. “You can’t go around campaigning on being Jewish or Latino, or it would appear to be pandering,” Jeffe said.

Garcetti is hot on Jewish entrepreneurialism, philanthropy and community involvement. “I feel like it’s my community,” he said. Though he came from a secular family, he attended Wilshire Boulevard Temple’s summer camp. He has visited Israel several times, and cites the Roth Family Foundation, created by his grandparents, for its contributions to diversity programs, high school dropout prevention and environmental causes. He views Judaism, he said, “as a vehicle for activism.”

Garcetti’s cross-cultural connections have on occasion proven invaluable. His attendance at an Episcopal high school allowed him to help save the Silverlake Independent Jewish Community Center a few years ago when it was foundering financially. He contacted Episcopal Bishop J. Jon Bruno, who played basketball at the JCC in his youth, and helped persuade him to step up with an interest-free loan.

As in every city, politics creates a small town when it comes to relationships. When Garcetti is asked about his opponents, he generously gives credit to Greuel and Perry, both City Council veterans. He also faces a potential contest with Yaroslavsky — his mentor and the officiant who presided at his marriage to Amy Wakeland — with cheerful equanimity.

With another bite of Junior’s chocolate chip rugelach and only a slight hint of how hard he will campaign for the job, Garcetti said, “I will stick to who I am and what I do.”