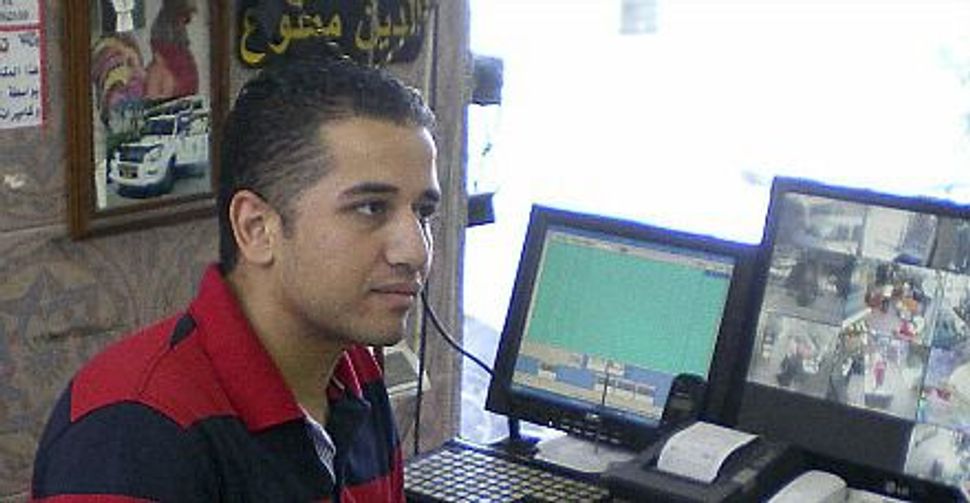 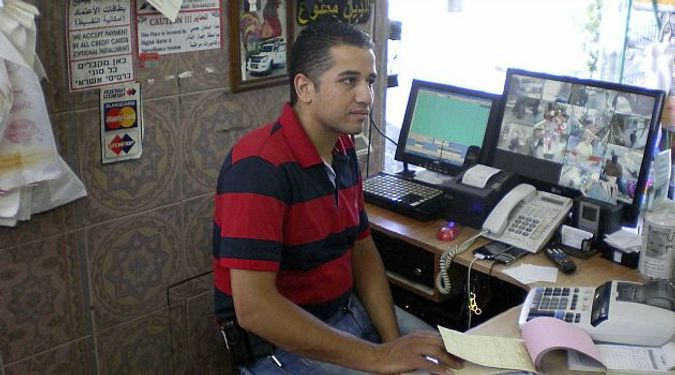 Call it patriotism or doing something to express his Palestinian identity — Taisir Jubeh wanted to start a business in Jerusalem.

So five months ago, after handing over the reins of his Ramallah bookshop to relatives, he opened a men’s casual wear store in the new Addar Shopping Mall, off Salah el-Din Street. The mall, opened earlier this year in downtown East Jerusalem by Muhammad Nuseibeh, a member of one of East Jerusalem’s most prominent families, had sparked hope that its 40 stores and offices would inject new life into the struggling area.

Instead, Jubeh and his fellow merchants are now in trouble. There are few, if any, customers, and many shops are already vacant.

That’s a dispiriting contrast with the teeming business areas in Jewish West Jerusalem. More tellingly, it contrasts with the boom in commerce now taking place in West Bank Palestinian cities such as Ramallah.

“You would see a lot of people” in either of those locales now, Jubeh noted, surveying the empty Addar Mall at midday. “But here it’s asleep.”

The failure of the Addar Mall is part of an alarming economic meltdown in East Jerusalem. The Palestinian sector of the city was once the shopping and business hub for Palestinians throughout the Israeli-occupied West Bank. But now, thanks to Israeli security checkpoints and a separation barrier begun a decade ago after a series of bloody Palestinian suicide bombings, East Jerusalem is isolated from its customer base in the West Bank — and caught in a seemingly bottomless economic tailspin.

“The city is dying,” businessman Nabil Feidy said. “East Jerusalem has always been poor, but the political situation and the wall have destroyed the economy completely.”

In their endless battles over Jerusalem, Israeli Jews and Palestinian Arabs routinely invoke God and history in asserting their respective right to sovereignty over the city’s Eastern sector. But for the Palestinians, there is an additional, very practical issue: East Jerusalem is the longtime commercial capital of the West Bank. Cut it off from its hinterland, and its economic rationale vanishes — along with its ability to sustain the 360,882 Palestinians living there.

According to a new report by the Association for Civil Rights in Israel and to interviews conducted by the Forward with residents in four neighborhoods, East Jerusalem, an area annexed to Israel on June 27, 1967, and declared part of its “eternal, undivided capital,” has fallen to unprecedented levels of poverty. The political and physical barriers separating it from the West Bank are viewed as a primary cause.

Nearly 80% of East Jerusalem Palestinians now live below the Israeli government poverty line, according to figures cited in the ACRI report, up from 64% six years ago.

The ACRI report bluntly attributes the problem to “‘the cumulative effects of annexation, neglect, rights violations and the completion of the separation barrier.”

Israel’s annexation of East Jerusalem after the 1967 Six Day War has never been recognized by the international community. A series of UN Security Council Resolutions, to which the United States abstained, have ruled it illegal.

Today, Israeli and Palestinian observers warn of increases in crime and violence, and of a turn toward religion as an outlet for social and economic distress among East Jerusalem residents. The Israeli government, they argue, is not paying enough attention.

“There is no money and no services, and the pressure is taking people to religious fundamentalism,” said Fakhri Abu Diab, an activist in the impoverished al-Bustan area of Silwan, beneath the Old City walls, a neighborhood where residents also face the threat of having their homes demolished on the claim that they were built illegally in the area of a planned biblical archaeological park.

According to Abu Diab, the Islamic movement headed by militant Israeli Arab Sheikh Ra’ed Salah is making inroads, recently having renovated a playground across from his house.

Prime Minister Benjamin Netanyahu’s spokesman, Mark Regev, said the government is committed to improving conditions in East Jerusalem, an area that Palestinians claim as their future capital but that according to 19-year old “interim” peace agreements is off limits to the Palestinian Authority in the West Bank. “We are committed to narrowing and eliminating the gaps,” between the Arab and Jewish populations, Regev said.

But the current realities on the ground do not point in that direction.

Low-income Palestinians, already hit hard by the economic deterioration, told the Forward of trying to smuggle baby milk powder and meat with them as they crossed through checkpoints back into Jerusalem from the West Bank. The prices in the West Bank are a third lower, they said.

Abu Diab related that he and his neighbors must pay fines of about $250 per month in assessments to the municipality for illegal construction, about one-third of the average monthly income in the area of drab concrete block and stone houses, he says.

Hani Alami, a telecommunication specialist who opened a shop in Ramallah after his Jerusalem store ceased being profitable, said the rent on his flat had gone up to $1,250 today from $450 just four years ago.

“I don’t see a future,” said Hani Dweik, a pipe welder and father of six who lives with his father inside the walled Old City. “How will I be able to make a house for my sons?”

The housing squeeze highlights another issue contributing to East Jerusalem’s economic descent. While the government has supported extensive construction for exclusively Jewish neighborhoods, it has sharply restricted development and building for the Palestinian population.

According to a January 2011 report by the Israeli human rights group B’Tselem, since annexing East Jerusalem and many surrounding areas to form Jerusalem’s current borders, Israel has expropriated about one-third of the annexed territory — most of it privately owned Arab property — for residential construction reserved exclusively for Jews and for “green areas” within which building is not permitted.

No Palestinians sit on the planning boards that make these zoning and construction decisions. Wary that participating in elections would legitimize Israeli annexation, Palestinians have refrained from seeking posts on the city council and have no influence on the municipality. The key decisions impacting their daily lives are made entirely by Israelis.

The consequences of Israeli policy are evident in Palestinian neighborhoods. According to ACRI figures released in May, housing density in Arab neighborhoods is almost twice that of Jewish neighborhoods. The lack of available land forces many Palestinians to build homes where they can without first obtaining a building permit. Alternatively, Palestinians feel forced to leave the city and relocate to the West Bank, whereupon they lose the special residency status that gives them the right to enter Jerusalem freely as Palestinians.

Yakir Segev, a city councilor from Mayor Nir Barkat’s Jerusalem Will Succeed party, dismisses these restrictions on Palestinian construction and East Jerusalem’s cut-off from the West Bank as root causes of Palestinian poverty there. He instead views it as an outgrowth of Palestinians “having trouble fitting in with the dominant language and culture, just as you will see happening with immigrants in any place…. No one is limiting their right to work or study.”

The Palestinians, he said, must address their current reality as residents of a unified city now joined irrevocably to Israel, not the West Bank. Their economic opportunities, he explained, now lay in attracting Israeli shoppers and investors. Segev faulted the educational system in East Jerusalem, saying that it does not place enough stress on sciences and Hebrew, and thus fails to provide graduates with the tools necessary to find decent jobs.

The school system is run by the municipality and the Israeli government, but the vast majority of students study according to a Palestinian curriculum, which relegates Hebrew to a third language after Arabic and English.

Menachem Klein, a dovish political scientist at Bar-Ilan University, near Tel Aviv, attributes the worsening plight of East Jerusalem Palestinians to Israeli policymakers who, he says, view the city’s Arabs as a threat to the city’s Jewish demography and Israeli sovereignty.

“There has been a deliberate Israeli policy to disconnect East Jerusalem from its social, economic and political hinterland through the wall for political purposes, and that brings a poverty crisis,” Klein said.

But Amir Cheshin, former adviser on East Jerusalem to the late mayor Teddy Kollek, rejected the notion of a purposeful Israeli policy behind the economic failure. Israeli policymakers simply failed to plan ahead when they built the separation barrier, he said.

“They needed to make preparations so that the economy wouldn’t be harmed or would be harmed less,” Cheshin said. “This could have been done with more crossing points and more entry permits. The barrier was built because of a security problem, but there is a catch-22 because the economic decline and growing poverty it creates will also cause security problems.”

But it’s not only the Israelis who are to blame in the view of some Palestinians. Independent Palestinian journalist and blogger Said Ghazali said that Arab states are strong on rhetoric about Jerusalem but do not provide the practical assistance that is most needed, such as funds to alleviate the housing crisis.

“To stay in Jerusalem, people need to have houses,” Ghazali said. Noting the high cost of housing permits even in those cases when Palestinians are able to obtain them, he said, “The Arab League should be giving people loans so they can afford housing permits.”

But for many, buying a home is not the immediate problem. In Wadi Joz, a Palestinian area known for its car repair shops, Salah Sharabati, who manages a butcher shop, dismissed a question about whether he was planning to buy a house for his wife and their 2-year-old. “This is not the time to think about projects,” he said. “At this time, if you eat and drink, it’s an achievement.”