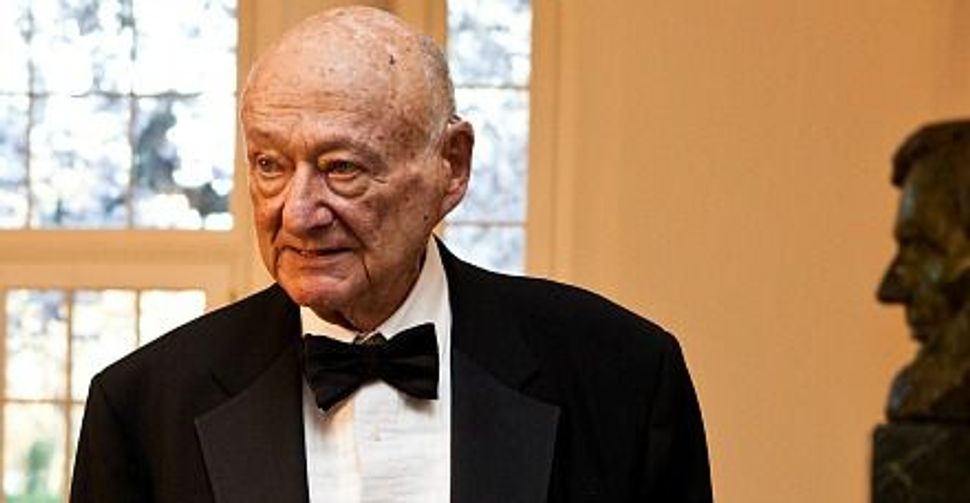 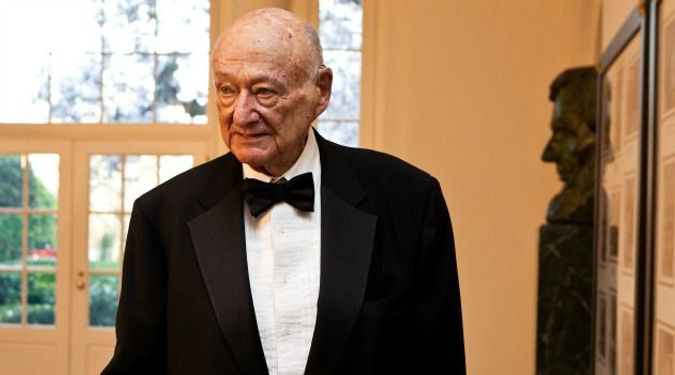 It was primary night, and Ed Koch was eating mussels.

The 87-year-old former mayor had a corner table at an Italian restaurant on the West Side of Manhattan. At his elbow was John LoCicero, his political advisor since the 1960s. LoCicero was eating mussels, too.

Primary polls were still open for another hour, but LoCicero, Koch and the three other longtime Koch allies out for dinner on June 26 were already talking about the general election — and the deciding role they predicted for the mayor in President Obama’s re-election campaign.

“Ed will get him Florida,” LoCicero said.

Koch, who hasn’t held public office since 1989, reasserted himself as the go-to arbiter of a candidate’s pro-Israel bona fides last fall. His cross-party endorsement was widely credited with helping Republican Bob Turner win a surprise victory in a special congressional election in a heavily Jewish New York district.

But Koch isn’t satisfied helping win a few races in New York’s outer boroughs. This year, the mayor plans to fly south to win Florida’s Jews, and maybe Florida itself (and perhaps, if the electoral math turns out right, a second term) for President Obama.

Obama may see in Koch a surefire backstop against Republican claims that he is insufficiently pro-Israel. But Koch isn’t great at staying on message. When barnstorming Florida for Jimmy Carter in 1980, Koch said the then-president “should rot in hell” if he broke commitments he’d made on Middle East policy. In an election with no margin for error, the mayor could be a liability.

“He’s got a proven record of lighting off Roman candles and carrying dynamite wherever he goes,” said one Florida Democratic political consultant, who asked not to be named. “That’s kind of what makes him interesting.”

Ed Koch is the only living person with a New York City bridge named after him. A polarizing mayor who came to power backed by a coalition of middle-class white voters, Koch was at the center of the tensions between black and Jewish communities that peaked in the early 1990s. Decades later, however, the rough edges of Koch’s legacy have been smoothed over. He’s the city’s eccentric grandfather, wryly aware of his own nostalgic cachet.

He’s also a power player. Add whiskey and cigars to Koch’s table at Bello Restaurant and you would have thought you were in a smoke-filled room at a long-ago Democratic Party meeting. To Koch’s left was LoCicero, 82, a weathered Italian-American in a fat red-and-blue tie. Pete Piscitelli, also 82, once a powerful Albany lobbyist, sat on Koch’s other side. Across the table were Andy Kriss, 65, deputy police commissioner under Koch, and Peter Aschkenasy, 70, a longtime Koch friend who sits on a handful of high-profile not-for-profit boards in the city.

Koch wore hearing aids and a red tie. Every so often he flubbed a name. When he couldn’t quite make out a question, LoCicero would lean in and repeat it for him, sometimes holding his arm.

“This is an unusually good restaurant,” Koch remarked as he ate his appetizer of roasted red peppers with anchovies.

The old-school Jewish and Italian Democrats meet for dinner each election night, and have for decades. They also meet for lunch every Sunday, often joined by former New York City Parks Commissioner Henry Stern, among others. They rendezvous at Koch’s house in Greenwich Village, and then go out — east to Union Square Café, or to Aquagrill in SoHo.

The conversation at the table moved fast, the restaurant was noisy, and at times it seemed like Koch was getting left behind. But when Koch spoke about Turner’s upset victory in New York’s 10th Congressional District after his endorsement of the candidate, the floor belonged to the mayor.

“I believe Obama was not sufficiently supportive of Israel,” Koch began, explaining how he wound up backing Turner for the seat, whose district boundaries include parts of Brooklyn and Queens.

Given the district’s large Orthodox Jewish population, Koch said he saw an opportunity to turn the special election into a “referendum” rejecting Obama’s Israel policy. Koch said this on television, and soon received a call from Turner, a retired businessman with little political background. Koch agreed to cross party lines and back Turner if Turner agreed to push Koch’s message on Israel, and to oppose Republican efforts to privatize Social Security and Medicare. The two put their pact in writing.

Turner’s Democratic opponent, David Weprin, himself an Orthodox Jew, called Koch, and asked why he’d chosen Turner to send his message to the White House. Koch told Weprin it wouldn’t have worked. He recalls thinking, “You’re just another Jewish Democrat from New York.” But he held his tongue.

Even sugarcoated, the message stung. “He was pissed,” Koch recalled.

As for Koch’s friends, said LoCicero: “We thought he was nuts.”

Koch had turned against members of his own party before, more than once. In 1965, Koch, then a district leader in Greenwich Village, supported liberal Republican John Lindsay for mayor, infuriating the Democratic establishment and risking his fledgling career. In 1993, Koch endorsed Rudy Giuliani. And then in 2004, he stumped for George W. Bush in Florida, saying the Democrats didn’t “have the stomach to fight … international terrorism.”

This also wasn’t the first time Koch had put himself at the center of a hawkish pro-Israel Jewish pressure campaign on a sitting president. In 1977 Koch attacked President Carter over Carter’s call for peace talks between Israel and the Palestine Liberation Organization, just a month after Carter had endorsed Koch’s first mayoral bid.

But how important Koch’s endorsement was in the outcome of the Turner race isn’t entirely clear.

Whether Turner’s eventual victory was thanks more to Koch’s intervention or Hikind’s is difficult to say. What’s certain is that the loss of a safe Democratic seat drew Obama’s attention to Koch. Soon after the vote, then-White House chief of staff Bill Daley called Koch for a meeting, telling him to arrive early to a dinner the president was hosting at the New York Public Library’s 42nd Street research branch.

“You look terrific,” Obama told Koch as he entered the room, according to Koch’s account of the meeting. “I know you exercise every day.”

“Not true,” Koch retorted. They proceeded to discuss Koch’s back pain; his 2009 surgery, and a photo of Cardinal John Joseph O’Connor that Koch held during his hospitalization so that if his back pain went away the miracle could count towards O’Connor’s beatification. Daley asked for the photo.

Then, they talked about Israel. Obama argued that he supported Israel; Koch criticized the way in which the president invoked a return to Israel’s 1967 borders in a controversial speech earlier that year.

“I need you,” Koch remembers Obama saying. As Koch recited the line at Bello Restaurant he pointed to his own chest, in case the president’s meaning wasn’t clear. “Your voice is heard outside of New York,” Obama continued. “Let’s stay in touch.”

With that, Koch said, he decided to back Obama. He said that he had always supported Obama’s domestic policy agenda, and that there was no point in holding out. Still, he said he thought he had done the right thing in the Turner episode.

“I have no regrets about it,” Koch said.

Koch said that he had been asked to travel to Florida for Obama after Labor Day. (The Obama campaign would not comment on Koch’s planned Florida trip.) He will be one of a deep roster of high-profile officials doing Jewish outreach for the Obama campaign in Florida, including Congresswoman Debbie Wasserman Schultz, who is also the chair of the Democratic National Committee.

Before Koch’s star turn at some retirement community assembly hall in Delray Beach, however, he faced a test of his vote-bringing power the night of his dinner in two congressional districts that overlapped with the Turner district, which was broken up in the redistricting process.

In Queens, however, the race was tighter. Koch had backed Rory Lancman, a relatively young New York State Assemblyman who made his hawkish position on Israel the centerpiece of his campaign.

In fact, Lancman’s opponents had hit him for talking too much about Israel in the primary, and particularly for a mailer the campaign distributed that featured a masked gunman, nuclear missiles, American and Israeli flags, what might be an exploding car and a granite-faced Lancman, all under the phrase, “It’s A Dangerous World.”

Lancman lacked the backing of the county Democratic Party. When the polls closed at 9 p.m. it was quickly clear that he had been crushed, earning just 28% of the vote.

Still, speaking days after his loss, Lancman said he thought Koch’s support had helped. “I’m confident that almost every voter who went to the polls for whom Israel is a very high priority were voting for me, and Ed Koch’s [endorsement] played a large role in that,” he said.

Lancman’s failure to win could mean that Koch’s endorsement of Turner in a similar district last fall wasn’t as decisive a factor in the Republican’s win as some observers thought. Or not. There were plenty of factors besides Koch’s endorsement at play in the Lancman race, including a growing Asian population. Grace Meng, who won the primary, would be the city’s first Asian-American congresswoman.

“Endorsements generally are like chicken soup when you’re sick,” said Evan Stavisky, a partner at the New York political consultancy The Parkside Group, who personally supported one of Lancman’s rivals in the Queens primary. “It can’t hurt, it just may not cure the common cold.”

As for Koch, his sights are set far beyond Queens.

“Forget about New York City,” his old friend Piscitelli said. “He’s the king of the Jews in the whole country.”

“I never said that,” Koch said.