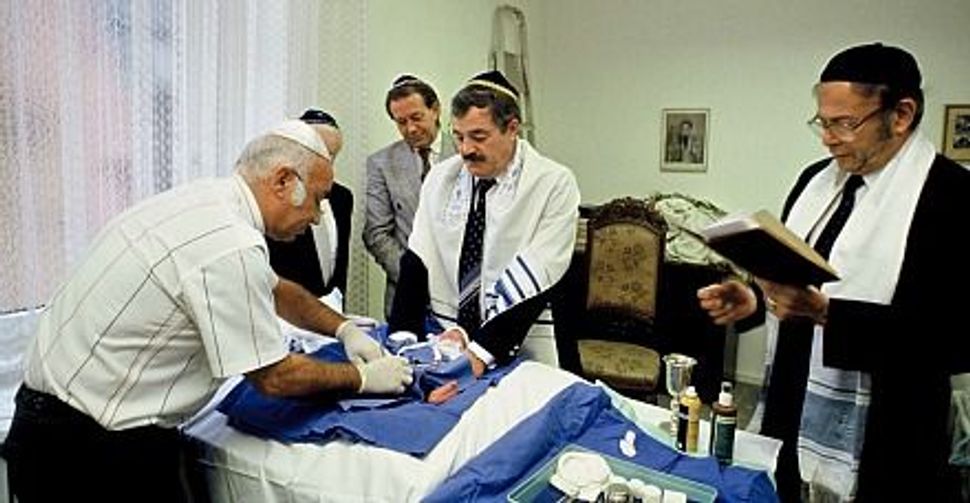 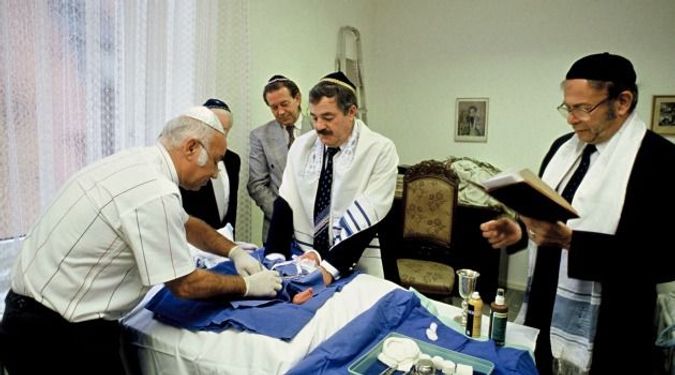 Threat to Culture? A recent ruling by a regional appeals court in Germany prohibits non-medical circumcision of children. It has sparked new debate on the place of Jews and Muslims in German society. Image by getty images

A controversial court ruling in Cologne that effectively prohibits most circumcisions in that city has touched a nerve worldwide, and sparked an outcry in Germany that has united Jews and Muslims in a rare common protest.

The judgment, delivered on May 5 but only published on June 26, found that the circumcision of a four-year-old Muslim boy who suffered from post-operative bleeding had violated the child’s fundamental right to be protected from bodily harm.

The Central Council of Jews in Germany lost no time in denouncing the ruling as an “unprecedented and dramatic intervention in the right of religious communities to self-determination” and “an outrageous and insensitive act.”

Aiman A. Mazyek, chairman of the Central Committee of Muslims in Germany, said he considered the Cologne ruling part of an ongoing debate about how much cultural difference is acceptable in Germany: “Certain elements of society see a threat in the other, in people who look and think differently,” he told the Forward.

Many mainstream political leaders also condemned the ruling. Foreign Minister Guido Westerwelle said in a statement that the legal debate “must not lead to doubts arising internationally about religious tolerance in Germany.” And in an interview with a German newspaper, Serkan Tören, integration expert for the Free Democratic Party, a junior partner in the government coalition, warned that “a ban on circumcision would be the clearest signal to the Muslims in our country that they aren’t part of Germany, that they aren’t even welcome.”

For all the intensity of the domestic debate, reaction from key figures outside Germany has gone further. Jonathan Sacks, Great Britain’s Orthodox chief rabbi, noted in the Jerusalem Post that a ban on circumcision “was the route chosen by two of the worst enemies the Jewish people ever had, the Seleucid ruler Antiochus IV and the Roman emperor Hadrian, both of whom set out to extinguish not only Jews but also Judaism.”

“Do judges in Cologne today really not know what happened the last time Germany went down that road?” Sacks asked.

For both Jews and Muslims, circumcision of sons during childhood is considered a fundamental religious rite for membership in the community. It is a rite that took place without government interference even during the Nazi era. But in 2010, a child of Muslim parents in Cologne developed minor bleeding after a Muslim doctor circumcised him for religious reasons at the parents’ request. Though a local hospital addressed the issue and the child’s health was not endangered, a local prosecutor pressed charges against the doctor. A trial court dismissed the case, but the prosecutor appealed the ruling to a higher court, which reversed the dismissal and barred the practice when done for non-medical reasons.

The Cologne judges weighed two separate issues — the right to religious freedom and the right to bodily integrity — and concluded that circumcision, “even when done properly by a doctor with the permission of the parents, should be considered bodily harm if it is performed on a boy who is unable to give his own consent.” In the words of the decision, circumcision went “against the interests of a child to decide later for himself what religion he wishes to belong to.”

While the verdict only applies to the Cologne area, the ruling could set a precedent for other parts of Germany. On July 3, Berlin’s Jewish Hospital — a 250-year-old institution — changed its circumcision policy out of fear that its doctors could face prosecution. Gerhard Nerlich, a spokesperson for the hospital, said that the decision had been made to stop circumcising males below 14 years of age whose parents seek the procedure simply for religious or ethnic reasons — hospital circumcisions being an option chosen by many secular Jews in Germany for their sons out of a sense of tradition, even if they have no interest in the actual religious ritual.

Nerlich added that the hospital would continue to perform the procedure for medical and hygienic reasons; it’s possible that Jews might continue to obtain circumcisions there under this rubric.

Sacks, the British chief rabbi, placed the ruling in the context of a backlash taking place against Muslims, with the Jewish community suffering “collateral damage” — and not just in Cologne. He cited a ban in Netherlands — since reversed — against ritual slaughter.

In the past several years, public discourse in Germany has turned notably xenophobic. “Germany Does Away With Itself,” a bestselling 2010 book by Thilo Sarrazin, a former Socialist Party politician and executive officer of the German Central Bank, decried the increasing presence of Muslims in the country. The book was followed by Chancellor Angela Merkel’s controversial statement that multiculturalism in Germany had “utterly failed.”

A new central mosque in Cologne, which has been under construction since 2006, has been the subject of intense debate about its size, symbolism and the role it may play in either integrating or segregating Cologne’s 120,000 Muslims. Last year, the German state of Hesse banned the full Islamic face veil for public sector workers.

For all this, Mazyek, the chairman of the Central Committee of Muslims in Germany, said, “This isn’t primarily about Islam.” He instead portrayed it as part of a larger contemporary debate about all faiths. “One finds that there is a certain reservation about religion, even hostility to religion,” he said. “We see also this attempt coming from a ever-growing group of people in Germany, and in Europe, to tame religion, either by using jurisdiction, laws or cultural restrictions.”

Michael Berenbaum, a prominent scholar of the Holocaust at the American Jewish University in Los Angeles, predicted that the court ruling would ultimately “unite Jews and Muslims” in Germany.

Tsvi Blanchard, Meyer Struckmann Professor of Law at the Humboldt University, said that anti-Semitism and Islamophobia do not necessarily stand behind the verdict. Blanchard, who is also an Orthodox rabbi, said that the judges’ attitude towards circumcision appeared to stem from a “fundamentally different conception of how the body works.”

“There are many Germans who, like the Ancient Greeks, think of the body as created perfect, born perfect, and any change to that body becomes problematic,” he said. “The Jewish tradition, and perhaps the Muslim one as well, doesn’t see the body as born perfect; it sees the male body born in need of change in order to get better.”

The court’s suggestion to postpone circumcision until the child is able to give his consent, said Blanchard, shows how out of touch the judges were. Citing the greater physical and psychological trauma that circumcision imposes on older males, he said, “There’s something remarkably naive about the idea of telling someone ‘well, when you’re 18 you’ll decide if you want to be circumcised or not.’ The idea that that becomes a fair choice really suggests that they just hadn’t really thought it through very carefully,” he explained.

Blanchard felt confident that a higher court’s decision would also be informed by social realities. “It will be very difficult for Germany and for Europe to come to the conclusion that — forget the Jews — millions and millions of Muslims are in violation of fundamental constitutional rights,” he explained.

Meanwhile, the Cologne ruling is unlikely to deter mohels, or Jewish ritual circumcisers, from doing their job, said Blanchard. In fact, he suggested, a mohel who confronts prosecution for performing a circumcision could become a champion for overturning the verdict. “A mohel could say: ‘Go ahead, arrest me, that’s what I want, because we’ll work this case up to the constitutional court and you’ll lose in the constitutional court.’”