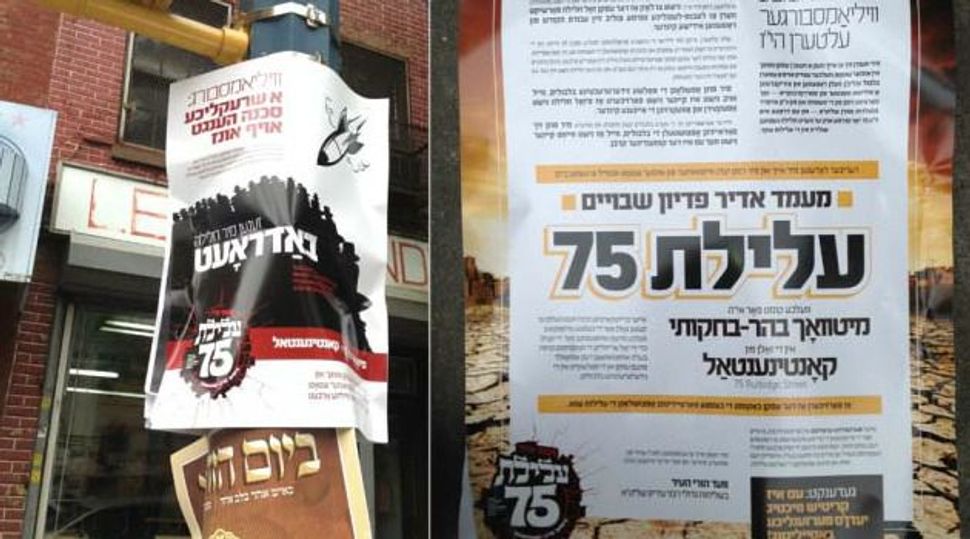 Community Pressure: Posters in Brooklyn denounce the accusers of Rabbi Nechamya Weberman. Although most attention has focused on child sex abuse claims against rabbis and teachers, the majority of the cases involve relatives or family friends.

Recent media accounts of child sexual abuse in Brooklyn’s Orthodox community have highlighted the threat victims face from teachers, rabbis and yeshiva staff as perpetrators, and the special pressures — even intimidation — they face from community leaders not to report such cases to secular law enforcement.

But a list of child sexual abuse cases in that community suggests that another source of pressure, even closer to home, may be at least as important.

The list, released by Brooklyn District Attorney Charles Hynes earlier this year, describes 97 abuse cases that Hynes says he prosecuted over the last three years. According to the data, 20% of these cases involved family members — usually fathers, brothers or uncles — and another 37% involved a perpetrator who was a friend or acquaintance.

By contrast, only about 12% of the cases appeared to involve rabbis, bar mitzvah tutors, counselors or yeshiva employees, including janitors and security guards. The next largest group of perpetrators consisted of strangers, who accounted for about 17% of Hynes’s Orthodox-related prosecutions.

The information from Hynes’s list must be treated with caution for a number of reasons. Some cases — Hynes’s office won’t say which — include adult victims while others involved non-Jewish perpetrators or victims. But according to Rhonnie Jaus, the head of Hynes’s sex crimes division, the “vast majority” of cases described are those of Orthodox children.

Hynes has also refused to release the names of the perpetrators, making an assessment of the professional positions of those described as family members impossible. Also, rabbis and other authority figures may make up a larger proportion of offenders than the list indicates, but not be present on it simply because people are too scared to report them.

Nevertheless, according to specialists in the field of child abuse, the data are consistent with what is known about such abuse more broadly. Cases involving ultra-Orthodox authority figures dominate headlines, as do those involving clergy members, football coaches and schoolteachers, because they often tend to have large numbers of victims. In terms of victims per perpetrator, such figures constitute concentrated sources of threat to children. But Hynes’s chart indicates that the general threat from family members cannot be ignored.

“You tend to expect that the majority of offenders are not people in a high-profile position,” said David Finkelhor, director of the Crimes Against Children Research Center at the University of New Hampshire. “They are brothers and uncles, fathers and neighbors.”

Just as secular victims often struggle to bring charges against people close to them, ultra-Orthodox families also grapple with the implications of accusing friends and relatives, these experts say.

“The family doesn’t want the breadwinner to be jailed and the income cut off,” Finkelhor said of secular victims’ families. “They don’t want the rest of the family turning against them because the kid’s fingered the grandparent.”

While the incidence of child sexual abuse within the circle of family and close acquaintances may be no greater than in secular society, ultra-Orthodox families do face special issues when wrestling with the challenge of reporting such people to the police.

Judy Braun, an author who was raised in the ultra-Orthodox community, said the distinction between family and non-family cases may be only partially useful when examining the ultra-Orthodox community. Braun, whose recent novel, “Hush,” is based on her experience of witnessing a friend being abused by a family member, said that because the community is like an extended family, there is often little perceived difference between family members and non-family members. “The [perpetrator] is a third cousin, or a friend of the family, or a son-in-law of a [family member],” Braun said. “It’s like a spider web.”

Further, even without direct and explicit interference from rabbinic authorities or the pressure of ruining a relative’s life, Braun said, parents are under intense pressure not to risk their children being tarnished as impure. “The attitude is a bit like Muslims,” Braun said. “It’s a stain on the [victims] themselves.”

Mesirah — a religious prohibition against informing on a fellow Jew to the secular authorities — is often blamed for dissuading victims from reporting abusers to the police. But there is anecdotal evidence that even in cases where the perpetrator is a non-Jew, ultra-Orthodox families struggle to go to police.

According to Jaus, in one recent case two ultra-Orthodox girls were separately abducted and sexually assaulted. A DNA sample linked a non-Jewish man to the crimes. But both families refused to cooperate, in part, said Jaus, because they feared that an investigation could tarnish the girls’ marriage chances as well as their siblings’ ability to get into school and get married. (Law enforcement sources confirmed that an indictment has finally been filed after one of the families agreed to cooperate.)

Such cases stand or fall on fears of stigma and shame, rather than intimidation. Marci Hamilton, a law professor at Yeshiva University, said victims who cooperate with police risk their future on the hope that they will not be identified. “I’ve heard a number of victims who told me that their lives are literally destroyed, ruined,” Hamilton said. “They will never marry if anyone finds out they were assaulted.”

Even in cases not involving rabbis or other respected community figures, leaders within Brooklyn’s ultra-Orthodox community still often pressure families, according to Jaus. “It’s not just well respected rabbis or someone from school” acting as a perpetrator that sparks community pressure, she said.

Teresa Huizar, executive director of the National Children’s Alliance, said such concerns are typical of conservative religious communities. “The shame created around abuse ought to be exclusively carried on the shoulders of the abuser,” Huizar said. Instead, shame is displaced onto victims and their families, representing “a shifting of moral responsibility and weight from the offender to the victim.”