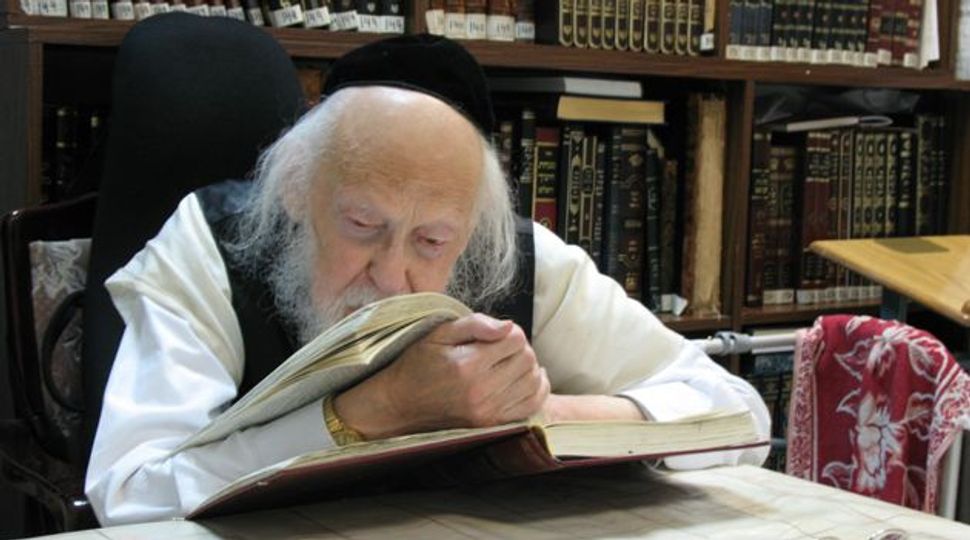 Rabbi Yosef Shalom Elyashiv, leader of the Lithuanian ultra-Orthodox community in Israel and one of the most well-known figures in the Haredi world, died Wednesday at the age of 102.

Elyashiv died Wednesday at Shaare Zedek Medical Center in Jerusalem, where he was hospitalized for several months due to heart, lungs and kidney complications. Since his hospitalization, Elyashiv has been anesthetized and put on life-support.

Tens of thousands of people are expected to take part in his Jerusalem funeral.

Elyashiv was born in 1910, the only child of his parents – Rabbi Avraham and Haya Mussa, but the figure who influenced his life most of all was his grandfather on his mother’s side, the Kabalist Rabbi Shlomo Elyahsiv, whose name was adopted by the family.

When he was 14 years old his family immigrated to the land of Israel and settled in the Mea Shearim neighborhood of Jerusalem. The diligent boy studied at the Ohel Sara Beit Midrash and made an impression on the Jerusalemite rabbinical elite, including those who had become close to Zionism, headed by the Chief Rabbi of the Land of Israel Avraham Yitzhak Hacohen Kook, Rabbi Arieh Levin, the “prisoners’ rabbi, (who later married a daughter of his to Elyashiv) and Rabbi Yitzhak Isaac Herzog, who was appointed chief rabbi in the mid-1930s.

Though Elyashiv never cut his ties with the fanatical – anti-Zionist – circles in Mea Shearim, for nearly 30 years he was close to the establishment. Under Rabbi Herzog, he was brought into the circle of rabbis that also included Rabbi Ovadiah Yosef and Rabbi Shlomo Zalman Auerbach, a circle that subsequently afforded the three of them an entry ticket to the stratum of the Gedolim – “the Greats” – in the rabbinical world. For a short time he served as chief rabbi of Ramle and was then appointed as a rabbinical judge in the rabbinical court system, where he served until he slammed the door and resigned in 1974.

That was the affair that for the first time brought Rabbi Elyashiv to the notice of the Israeli public, when he was serving at the High Rabbinical Court. He sat on the bench that deliberated on “the case of the brother and the sister” in the Langer family, a case that became a huge national scandal. Elyashiv led the ultra-Orthodox opposition to Rabbi Shlomo Goren’s efforts to remove the presumption of mamzerut – bastardy – from the two siblings. After his failure on the legal issue, Rabbi Elyahsiv resigned from the court and joined the ultra-Orthodox leadership – which condemned Rabbi Goren, who in the meantime had become the chief rabbi of Israel, as “the approver of the bastards.” Though he never identified himself as a Zionist, his resignation marked his estrangement from the Zionist rabbinate and his engagement with the ultra-Orthodox establishment.

In 1988, when the Lithuanians split from the Agudat Yisrael party, he acceded to the request of Rabbi Elazar Menachem Shach, the leader of the Lithuanian public, and participated in the meetings of the Degel Hatorah party’s Council of Torah Greats but from that time until his death he never accepted any official position in the party’s spiritual leadership. In the mid -990s, Rabbi Shach began gradually to leave the stage and sent public issues his way.

From his modest home – one and half rooms – in Simtat Hanan in Mea Shearim, beginning in the mid-1990s he decided who was a Jew, who would convert, how Jews would marry and how they would divorce, what would happen to the Israeli economy in the fallow year (once every seven years, as decreed in the Bible) and what the government policy would be regarding organ donations. He appointed Rabbi Yona Metzger as chief rabbi only in order to block the National Religious Party candidate and for many eyras he determined who would be the Degel Hatorah representatives in the Knesset, by means of whom he imposed decisions on fateful issues.

Had it not been for Rabbi Elayshiv, who though he was opposed to the disengagement ordered Degel Hatorah to support Prime Minister Ariel Sharon, the unilateral withdrawal from the Gaza Strip in 2005 might not have taken place. The newspaper Yated Neeman, his mouthpiece, often attacked the settlers.

In the arena of rabbinical law he was very strict and uncompromising hewing only to the narrowest of interpretations. He saw the halacha – rabbinical law – as a closed code that cannot be damaged at any price, even in the name of pragmatism or flexibility in adapting to a social or national reality. Examples of Rabbi Elyashiv’s strictness can be found well into his final years: his struggle against the government-sponsored conversion to Judaism that cast doubt on thousands of converts, his struggle against the “sales permit” in the fallow year and his stubborn refusal to recognize the scientific phenomenon of brain death, unlike other ultra-Orthodox rabbinical scholars who voiced opinions on the issue.

But his power was limited and his limitations were obvious concerning the issue of the racial discrimination in ultra-Orthodox education. The principals of the Lithuanian seminaries (schools for girls), who supposedly did as he bid, for many years ignored Rabbi Elyashiv’s Rabbi Elyashiv’s official position to the effect that the schools must enroll a quota of a minimum of 30 percent of their students from MIzrahi families (families with origins in the Muslim countries), and not a maximum of 30 percent as they interpreted this.

Not only the elite, but also the ultra-Orthodox rank and file voted with their feet: Many ultra-Orthodox ignored Rabbi Elyashiv’s rabbinical rulings prohibiting the use of the Internet, non-kosher mobile phones, wigs and more, and the extremist fanatics of the Eda Haredit were often enraged at him without him being able to enter into confrontation with them.

He and his late wife Sheyna-Haya, a daughter of Rabbi Arieh Levin, had 12 children. In May of 2009, he saw the start of the sixth generation of his descendents, with the birth of a grandson to one of his great-grandchildren.

So who will succeed Rabbi Elyahsiv? There are a number of candidates, the most senior of whom is Rabbi Aharon Leib Steinman, Rabbi Elyashiv’s number 2 and the supreme authority on matters of education, a young Jew of 96. There are also Rabbi Chaim Kanievsky, Rabbi Nissim Karelitz and Rabbi Shmuel Auerbach. Most of these men, incidentally, are related to Rabbi Elyashiv by marriage. However, another possibility is that not one but several successors will be chosen, which could lead to splits within the Lithuanian sector.