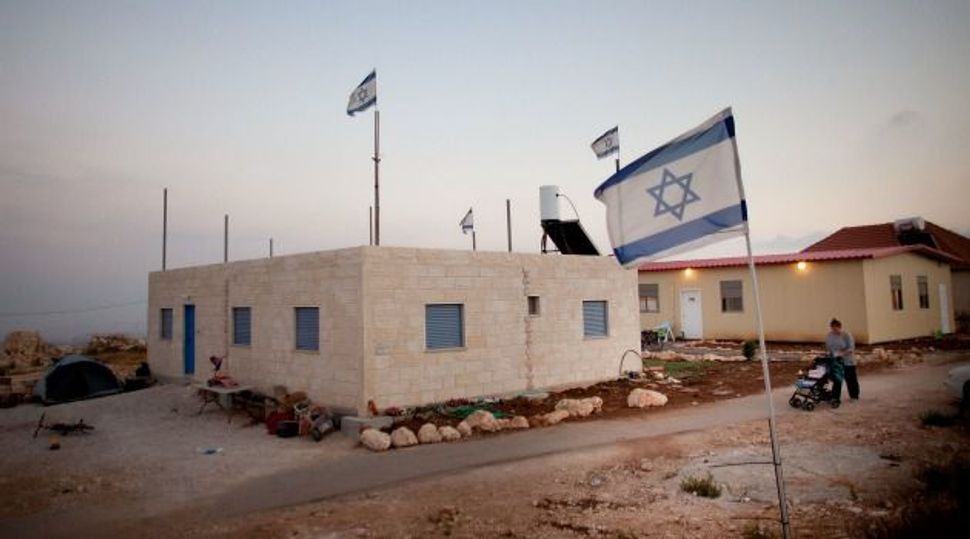 Illegal to Legal? The Levy Commission suggests that the West Bank is not occupied territory and the Jewish settlements are legal. Reaction from American Jews is threatening to fracture consensus on the peace process. Image by getty images

The American Jewish Committee, a centrist pillar of America’s organized Jewish community, is breaking with the long-standing establishment consensus that settlements on the Israeli-occupied West Bank pose no impediment to peace.

The committee, in a press release issued on July 12, affirmed the legality of settlements throughout the West Bank and rejected the notion that the territory was under legal occupation.

But in questioning the wisdom of Israel opening the territory to unlimited settlement — as a recent Israeli government commission has recommended — the AJC appeared to be moving beyond a position adopted 30 years ago as the Jewish communal consensus.

The Conference of Presidents of Major American Jewish Organizations adopted the position that settlements are not an impediment to peace during the early 1980s. At the time, President Reagan believed that settlements, though not illegal, were “ill-advised,” “unnecessarily provocative” and “not a constructive move” for the peace process.

Today, the U.S. government and the international community, apart from Israel, view settlements as an obstacle to peace.

The settlement issue was brought to a head July 8, when a commission appointed by Prime Minister Benjamin Netanyahu and presided over by former Supreme Court Justice Edmond Levy reported that Israel’s presence in the West Bank “does not meet the criteria of ‘military occupation’ as defined under international law.” As a result, the Levy Commission recommended that most West Bank settlements and outposts be legalized and that restrictions on West Bank construction be eased.

The commission’s finding appeared to contradict a ruling by Israel’s own Supreme Court in 2005 that found Israel’s presence in the West Bank and Gaza was a “belligerent occupation,” though the specific terms of the Fourth Geneva Convention did not apply to Israel’s rule there for particular legal reasons.

As the Israeli government weighed whether to accept or reject the commission’s findings, a group of 40 prominent centrist and left-of-center Jewish leaders signed a letter drafted by the Israel Policy Forum. They included Thomas Dine, a former executive director of the American Israel Public Affairs Committee; philanthropists Charles Bronfman and Lester Crown; Richard Pearlstone, a former chairman of the Jewish Agency for Israel and Alan Jaffe, president of the Jewish Community Relations Council of New York.

The letter warned that if approved, the report “will place the two-state solution, and the prestige of Israel as a democratic member of the international community, in peril.”

The AJC was more oblique in its warning. Executive Director David Harris said the report could “pose costly and unnecessary political and diplomatic challenges” to Israel and to the peace process if adopted.

Harris said he was concerned that the findings would provide “an unearned excuse” for Palestinians to avoid returning to peace talks and that they would “interfere” with the impression that Israel has a “profound commitment to a negotiated two-state solution.”

Abraham Foxman, national director of the Anti-Defamation League, disagreed. He said the commission findings posed no threat to the two-state solution or to the peace process. Foxman said that Jewish communal opposition to the report surprised him, particularly the declaration from the AJC.

“I don’t know what all the Sturm und Drang” is about, Foxman said, adding that the Levy Commission findings were in line with long-standing Israeli policy. “Israel has always believed settlements are legal,” Foxman said.

Mainstream American Jewish leaders came to a consensus on settlements around 1983, according to Kenneth Bialkin, a former national chairman of the ADL and a past chairman of the Presidents Conference. “To my knowledge there’s been no change in that,” Bialkin said.

Bialkin recalled a meeting of members of the Presidents Conference that took place around 1983, when he was ADL national director. At this meeting the consensus was agreed upon. “The consensus, if ever there was a consensus, was that we can disagree on the policies, but we do not disagree on the legality or on whether [the settlements are] an obstacle to peace.”

Julius Berman, chairman of the Presidents Conference at the time, said that to his knowledge the settlement consensus has not been tested since. B’nai B’rith International and AIPAC declined requests from the Forward to respond to the Levy Commission findings. Malcolm Hoenlein, executive vice chairman of the Presidents Conference, did not respond to multiple calls and emails from the Forward seeking his comments on the Levy Commission findings.

Berman said he was not sure that the same consensus — that settlements are no impediment to peace — could be reached today if the issue were to be re-debated. “The [ideological] poles [of the Jewish community] are a little stronger and tighter and further apart right now,” he said.

Certainly, he added, a consensus that settlements are an impediment to peace could never be reached.

AJC spokesman Kenneth Bandler said the AJC never accused settlements of being an obstacle to peace, but rather said that they “are problematic.” He cited a statement passed by the AJC’s board last October: “While emphatically rejecting the contention that settlements are the core issue of the Israeli-Palestinian conflict, AJC has long believed that Israeli settlement policy is not conducive to advancing prospects for peace.”

Jason Isaacson, the AJC’s director of government and international affairs, said, “This isn’t a legal question, this is a political question.”

Isaacson described the Levy Commission as a “political boon” to Israel’s critics who depict the Jewish state as an unserious peace partner. If adopted, the report would “undercut Israel’s message of preparedness to sit at the [negotiating] table without preconditions,” Isaacson said.

Daniel Gordis, senior vice president of Jerusalem’s right-leaning Shalem Center, agrees. Gordis, a signatory to the IPF letter, warned in a Haaretz opinion article that adopting the Levy report “will do Israel serious damage” by making the Jewish state appear as though it is unwilling to negotiate.

“Observers everywhere would read the adoption of the Levy report as tantamount to annexing the West Bank,” Gordis said. “It would be read as putting the Palestinians on notice that Israel plans never to evacuate any settlements, and that hopes for a Palestinian state are dead.”