A Curmudgeon?s Guide To Jewish History 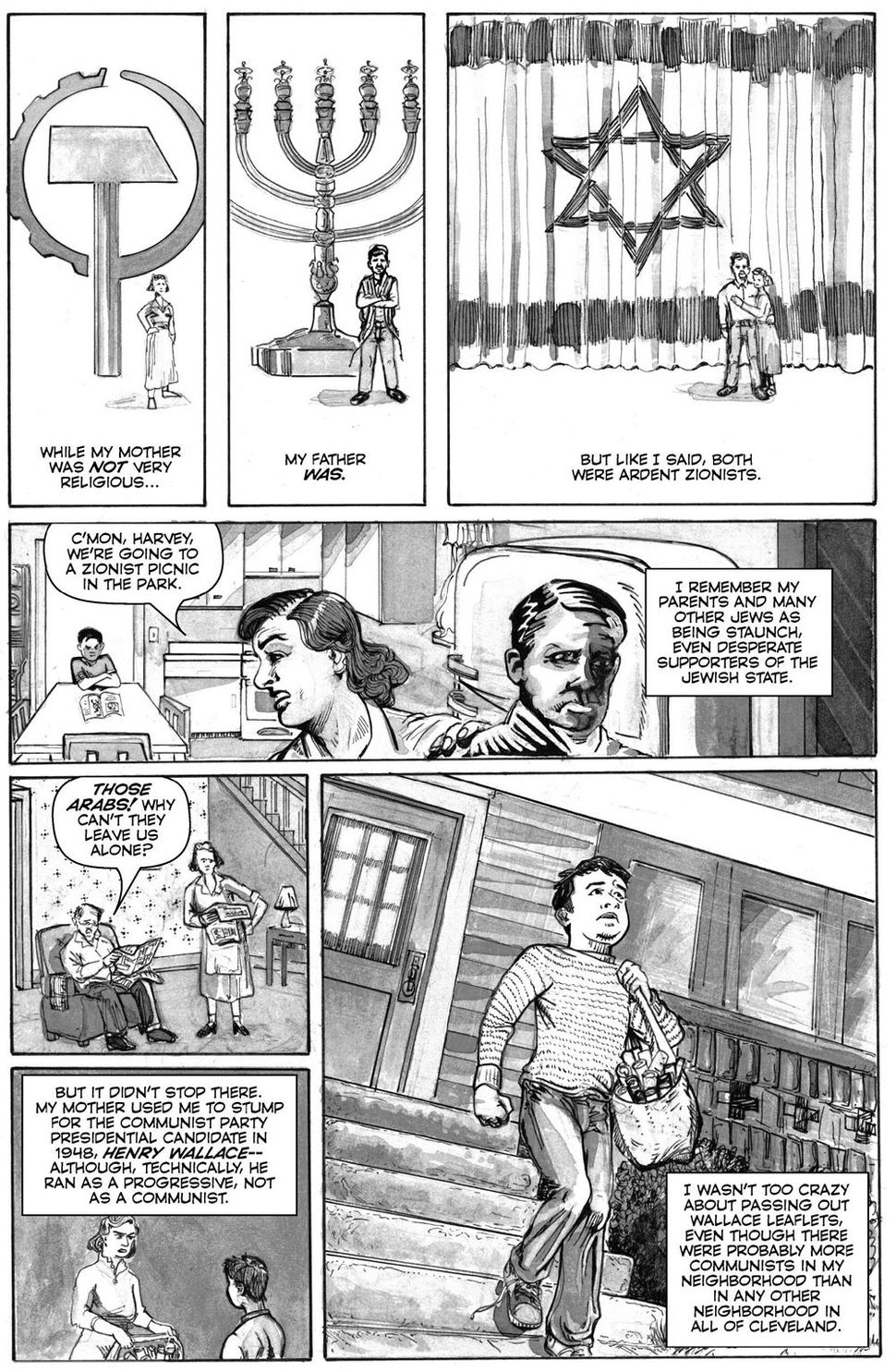 Not the Israel My Parents Promised Me
By Harvey Pekar and J.T. Waldman
Farrar, Strauss and Giroux, 176 pages, $24.95

A central question for fans of famed comics writer Harvey Pekar, who passed away in 2010, was whether he would produce a sequel to his 1978 classic, ?Standing Behind Old Jewish Ladies in Supermarket Lines.? In that legendary R. Crumb-illustrated grouse, Pekar slow-burned a lament about his tribal relationship to old Jewish women and their irritating frugality. It took 30 years to appear, but now that sequel, ?Not the Israel My Parents Promised Me,? has finally arrived. Pekar?s fraught history of Israel has been published posthumously, brilliantly illustrated and coaxed out of Cleveland?s cold earth by artist J.T. Waldman.

Pekar produced a sizable number of works between ?Old Jewish Ladies? and ?Not the Israel,? most of them autobiographical and dealing with Jewish content only occasionally. As Pekar reached the end of his life, the Jewish issue evidently came to interest him a great deal not only in a personal way, but also in a broader historical sense.

?Not the Israel,? which is told against the backdrop of a Cleveland bookstore, begins with the way in which Pekar?s parents ? an interesting coupling of religious father and communist mother, Yiddish speakers both ? indoctrinated him with the belief that the State of Israel was the savior of the Jewish people and the most important aspect of modern Jewish existence. From there, Pekar launches into a straightforward, although clearly Pekaresque, version of Jewish history, from the biblical period until today. Guided by Waldman?s wonderful renderings of both the ancient and modern worlds, we are led on a curmudgeonly journey, which, according to Pekar, is necessary to understand contemporary troubles. ?You gotta look at the big picture, including the old stuff, to wrap your head around what?s going on today,? he writes.

A strong believer in the power of the graphic narrative, Pekar lamented the fact that comics didn?t address more issues. He felt that the word-image combination could do anything. True, this came from a guy whose work retold daily life in economically depressed Cleveland, on the assumption that ?ordinary life is pretty complex stuff.? But Pekar?s last two books, ?Yiddishkeit? and now ?Not the Israel My Parents Promised Me,? consider much bigger pictures, broadening the scope of his work, just as he thought comics could.

A fascinating aspect of these two volumes is the Jewish worldview that Pekar espouses in them. The first, ?Yiddishkeit,? lends historical and cultural heft to a world of Yiddish culture left behind. Harvey clearly felt an affinity for Yiddish and explores its literary and theatrical nooks and crannies, empathizing with an abandoned Jewish culture just like he sought out discarded jazz sides at garage sales. With ?Not the Israel,? Pekar tells the tale of the world that, in his parents? view, should have replaced the Yiddish world but didn?t have the cultural connection of the former and was morally compromised because of the Palestinian issue.

Pekar?s disenchantment with the modern State of Israel was, as he writes, ?a process that rolled out over years.? Growing older and leaving the Zionist nest, he fell in with leftists, whose views differed significantly from those of his parents. What he found was that these critical views also had validity. But his parents? love for Israel was strong and, after getting kicked out of the U.S. Navy at age 17, he tried to immigrate there. After a meeting with the Israeli consul in Chicago, however, Harvey discovered that the Israelis didn?t want him any more than the Navy did.

Rejection notwithstanding, it?s evident that Pekar did quite a bit of reading on Jewish history and the State of Israel in order to tell his tale. As a result, ?Not the Israel? functions as kind of a mini-course on Jewish history as told by a cantankerous autodidact. On Pekar?s skeptical tour, Israel begins to go downhill in the 1970s, with the settlement of the Occupied Territories. On top of that, maltreatment of the Palestinians, Third World arms dealing and the increasing power of religious conservatives get his goat and push him over the edge. It?s not the best historiography ? there are hits and misses ? but the book will provide Pekar?s usual audience with a great deal of information on a topic with which they are likely unfamiliar.

Hats off, as well, to Waldman, who was able to distill Pekar?s ornery rants and pull the book through, despite the death of his collaborator. His illustrations run the gamut from ancient architectural reliefs and illuminated manuscripts (if you haven?t read Waldman?s stunning version of ?Megillat Esther,? do so ? it?s truly brilliant) to modern advertising and illustration. And by inserting himself into the text as Pekar?s occasional foil, Waldman cleverly transformed Pekar?s grouchy diatribe into a compelling debate.

A piece on Pekar can?t be complete, however, without a tiny bit of kvetching. Whoever it was at Farrar, Strauss and Giroux that made the decision to publish this graphic novel in a 6-inch-by-9-inch format should be drawn and quartered. The small size doesn?t do justice to the art of the book. A larger format would have satisfied the need to see Waldman?s terrific renderings in all their glory, from the streets of Cleveland to the streets of Jerusalem. This is the only disappointing aspect of the volume, which really should have appeared as an 8-inch-by-10-inch. Shame on you, cheap, administrative lackey at FSG, whoever you are.

The book closes with an epilogue by Joyce Brabner, Pekar?s widow, that describes the author?s dislike of traditional authority. Iconoclast in life and in death, Pekar rejected a traditional Jewish funeral and instead had his ashes buried to musical accompaniment by musicians from the Workmen?s Circle/Arbeter Ring. The scene is in the same spirit as a statement he makes near the book?s end. As he and Waldman engage in an intense debate over the issues they?ve raised, Waldman accuses him of being ?skewed and negative.? Pekar responds: ?I?m sure someone out there has a workable solution. But what do I know? I make comic books and write about jazz. I do know the difference between right and wrong, though.?

A Curmudgeon?s Guide To Jewish History